I have no idea how it is that we both woke up so early this morning.  Well, Chris went to bed early.  I think it was about 8:30.  I stayed up until about 11:00 pm watching a news documentary on line until my head nearly snapping off of my shoulders woke me up and said "GO TO BED!".

We had breakfast, packed up and headed toward we knew not where.  Then we discovered that there was a laundromat right around the corner, a bank and a Dollarama store.  Now, that sounds close by.  But when you have to drive around and find a spot that will accommodate about 16 feet of metal and steel, it just ain't that easy.  After scoping out the neighborhood, we found the perfect spot for "Grace the Pace Arrow". 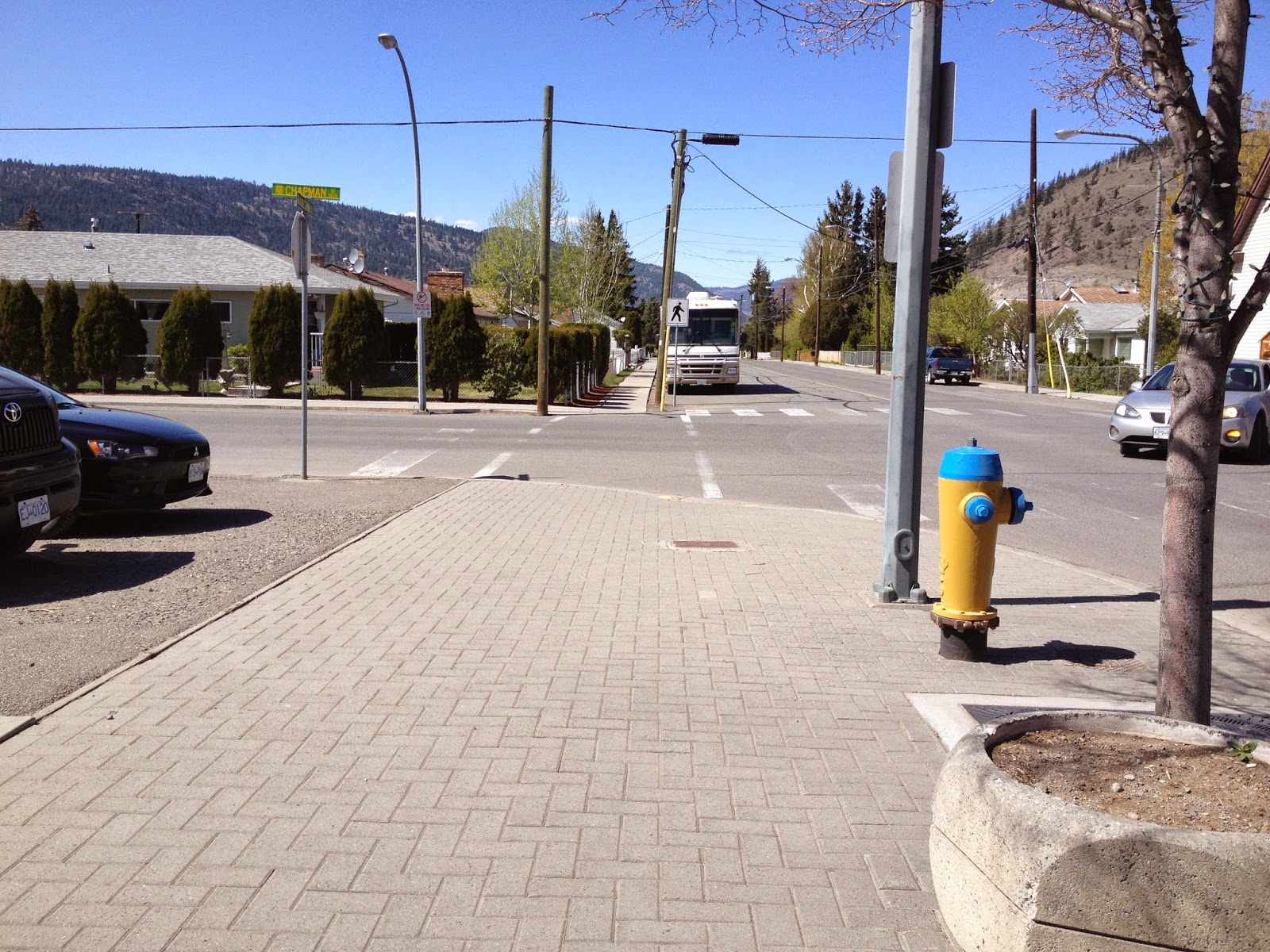 The laundry didn't take too long.  Chris disappeared into the town taking pictures while I sat outside on a street bench trying to thaw out!  The place was freezing because they had the air conditioner on.  Can you believe that!  It was in the 40's last night...ha.  Only in Canada folks....ha. 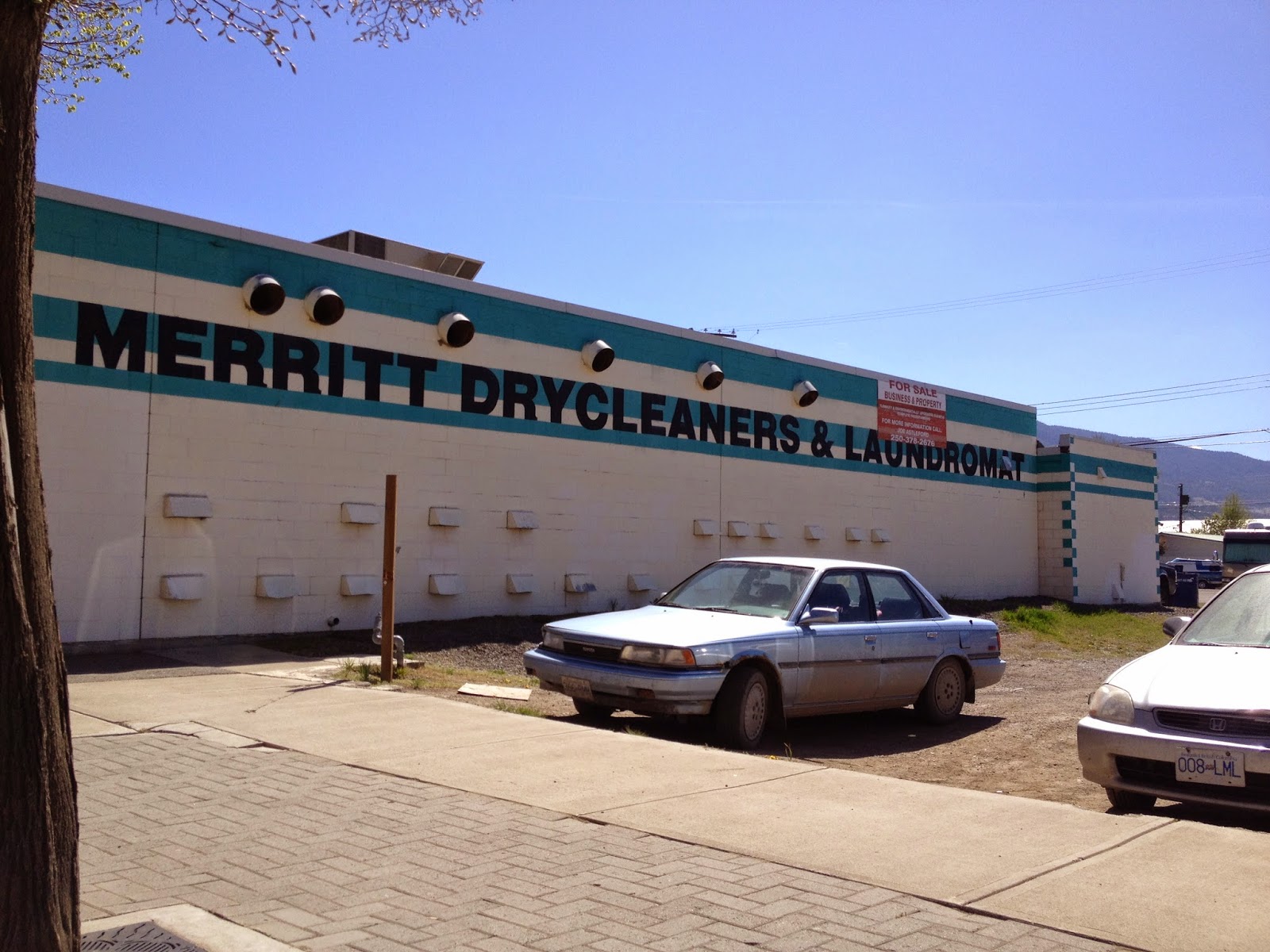 We figured when you get down to one package of fish minus any chips; it's time to do some shopping.  Besides that, neither of us know when we are actually going to make it back home again.  Although, we are shooting for.........well.......see! There you go! 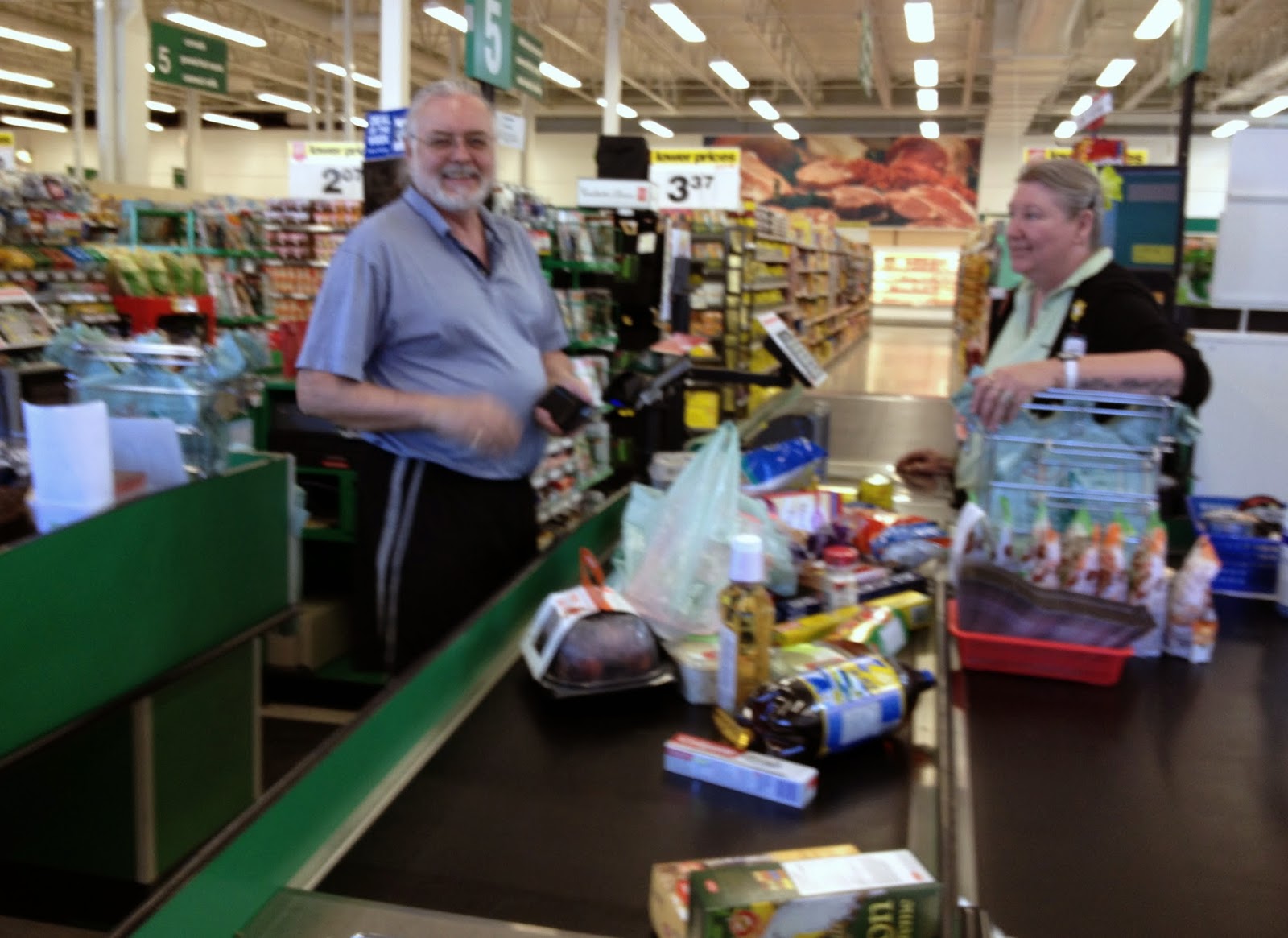 We snagged a roasted chicken with some cole slaw and potato salad for lunch and found a city park to enjoy our meal.  It was a wide enough space to get into (and long enough) with no problems.
The water was a bit muddy, but it was nice to sit by the water in our new home....:-) 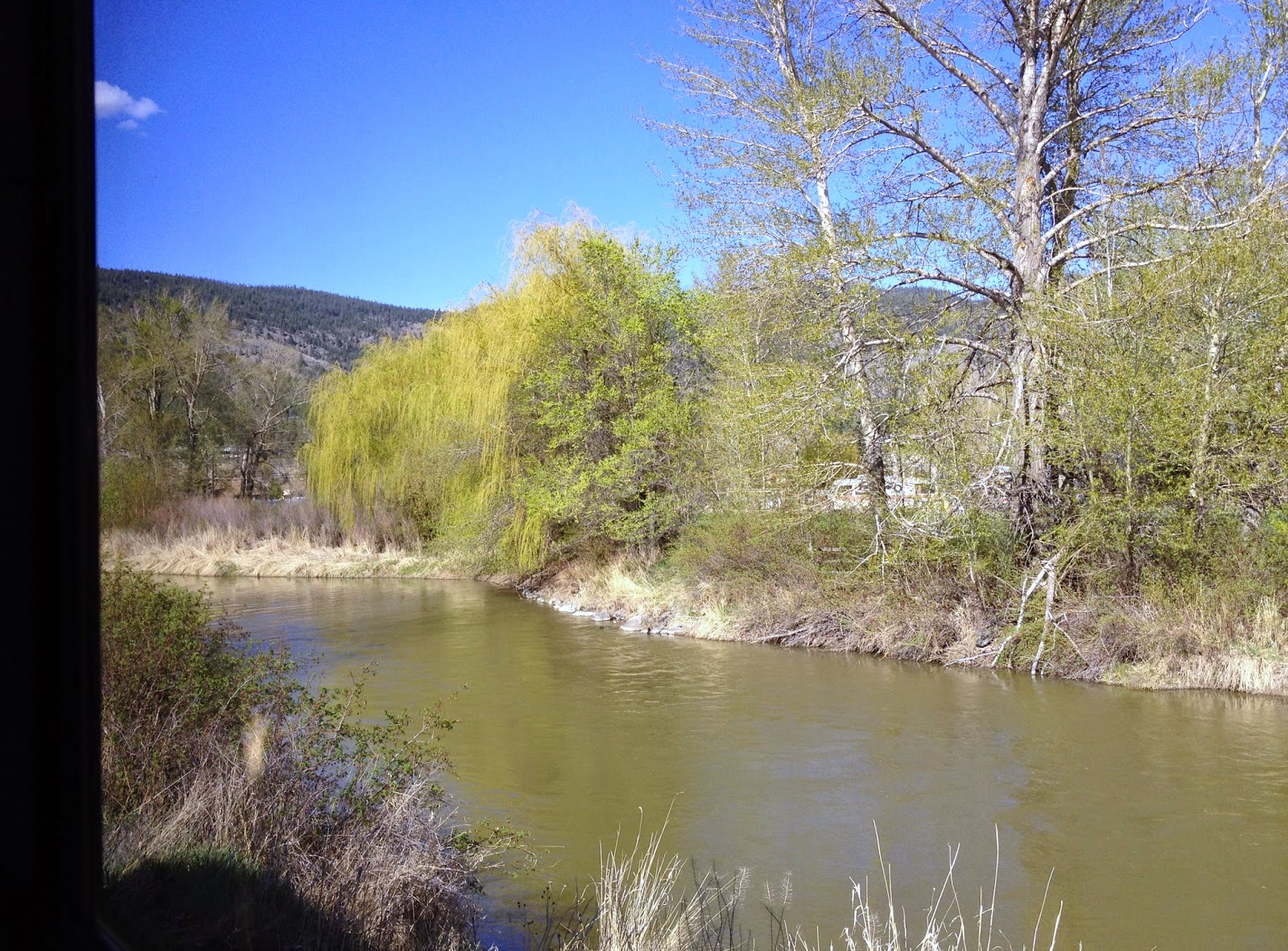 We both felt that it was time to find a place to stop and rest for the evening.  Preferably by the water, but time would tell if we could actually find that special place.  The scenary along the way was beautiful none the less....:-) 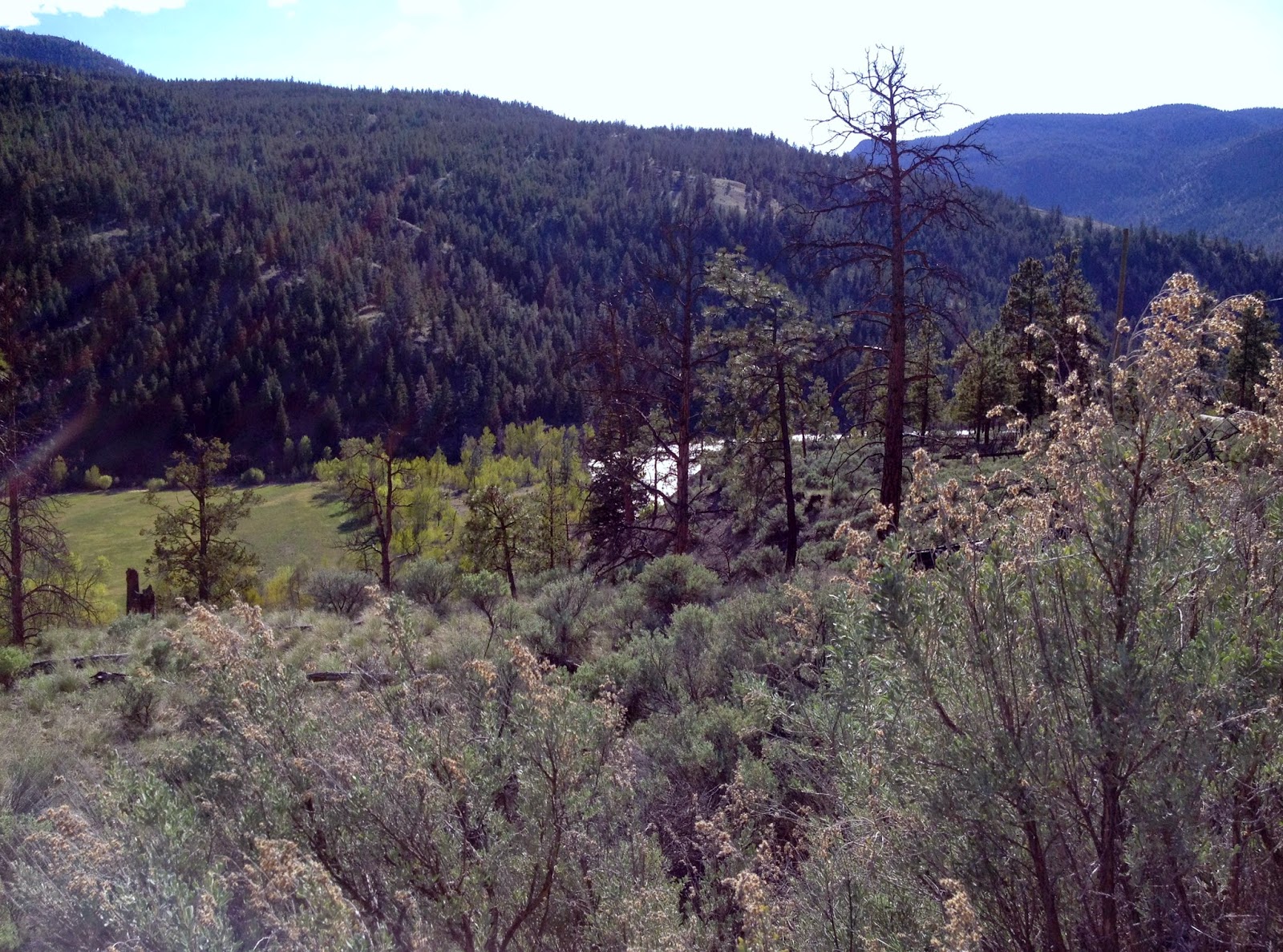 You do get the feeling of flying through the air in a giant fish bowl having near death experiences every time you come to a curve, but hey.....I survived it!  And this time without having to take an aspirin!....ha 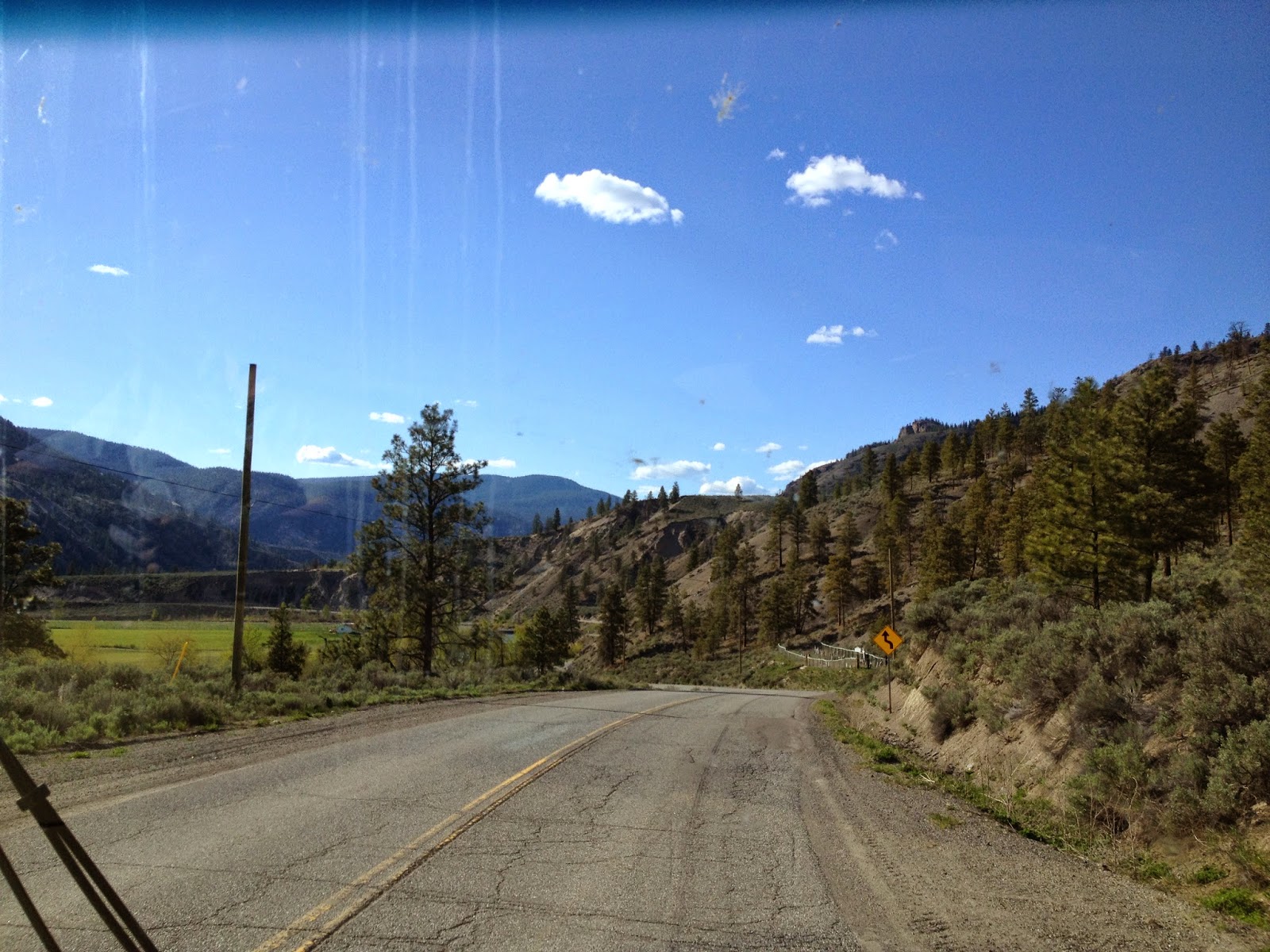 We stopped at this place which would have been perfect for boon docking except that we only had cell phones and not satellite phones with us and decided it was far too remote to stay here for the night.  But, it was gorgeous....:-) 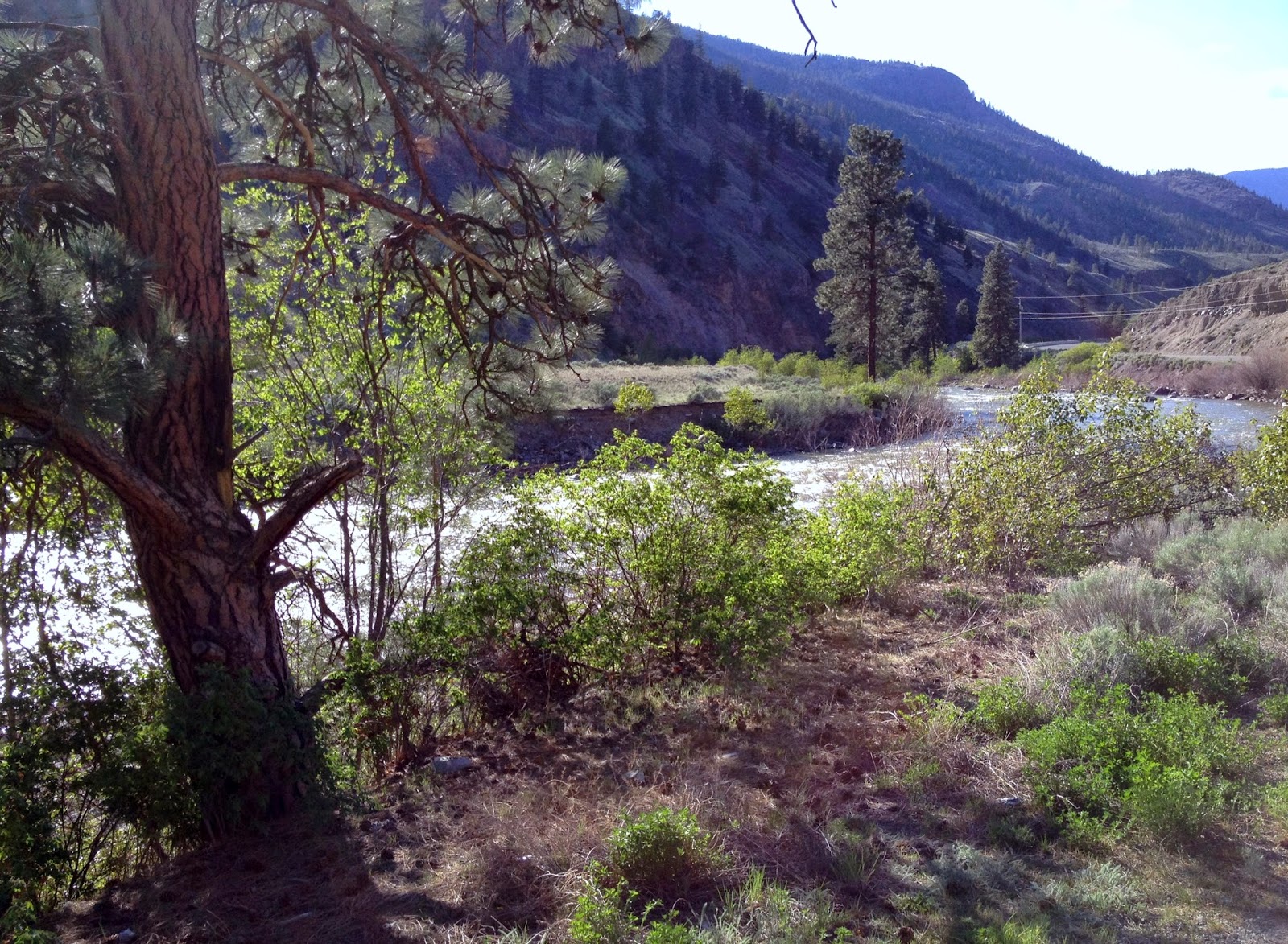 A few miles up the road their was a tiny little encampment.  We decided to stop and see about a vacancy that could accamodate our rig and van.  It was such a beautiful little place.....:-) 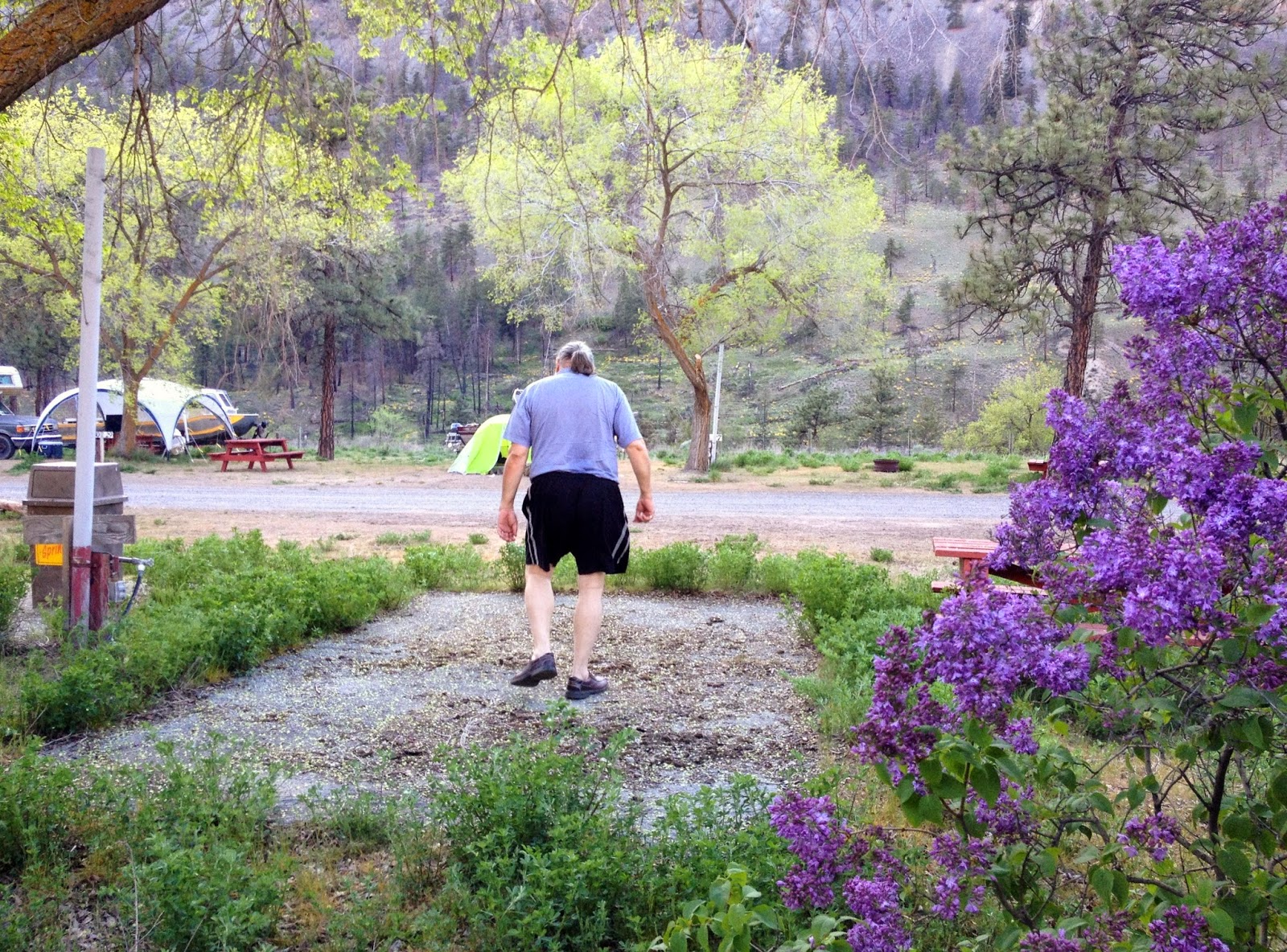 He is a shot of the road we drove up onto.  There is a building hiding behind all of that purple......:-) 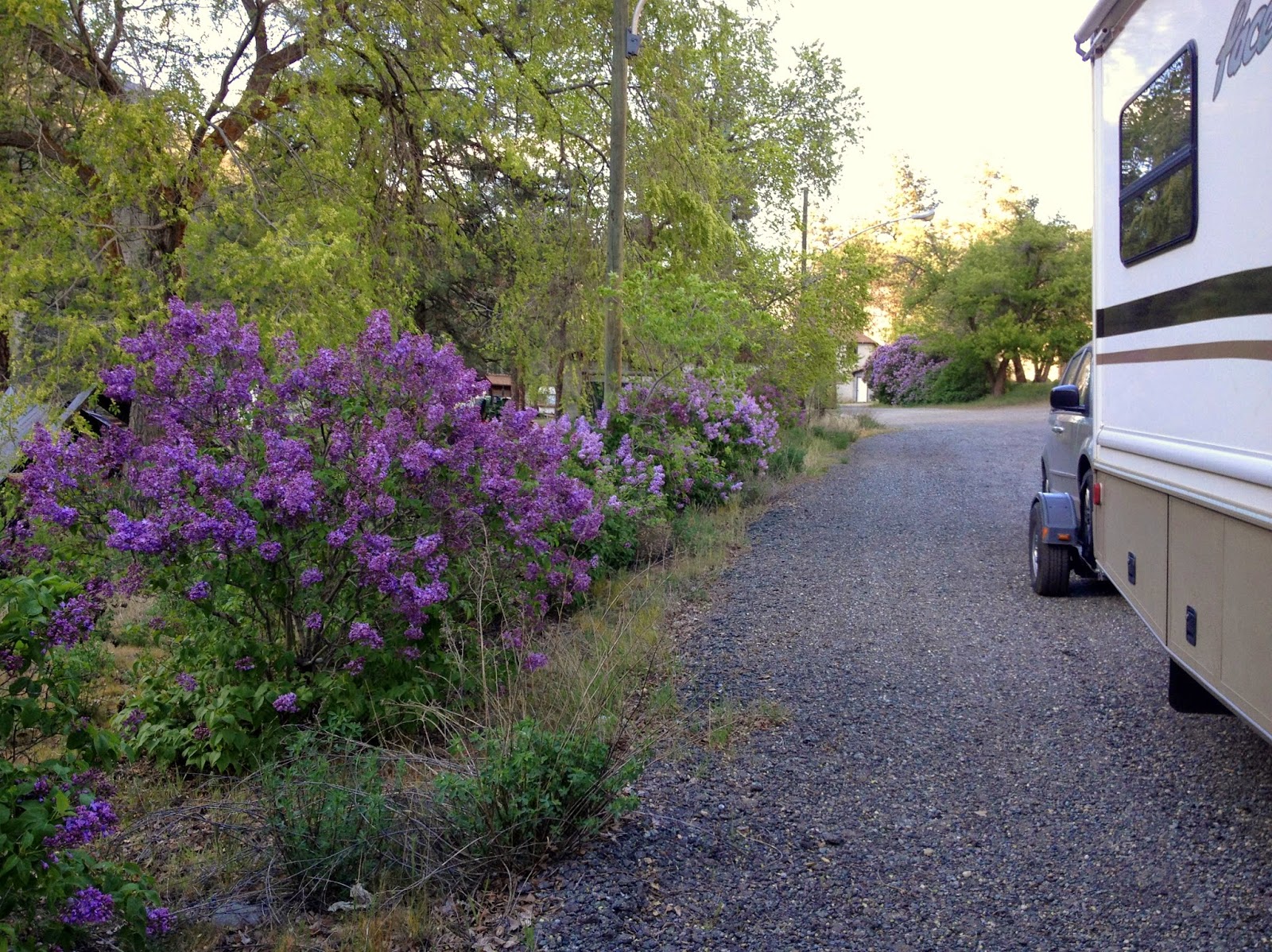 And little tents scattered around the camp grounds.  And just as little was "Joe Old Guy" who was the owner and care taker of the place.  He told us that he had been there since 1981.  The name of the encampment was Shaw Springs RV Park. 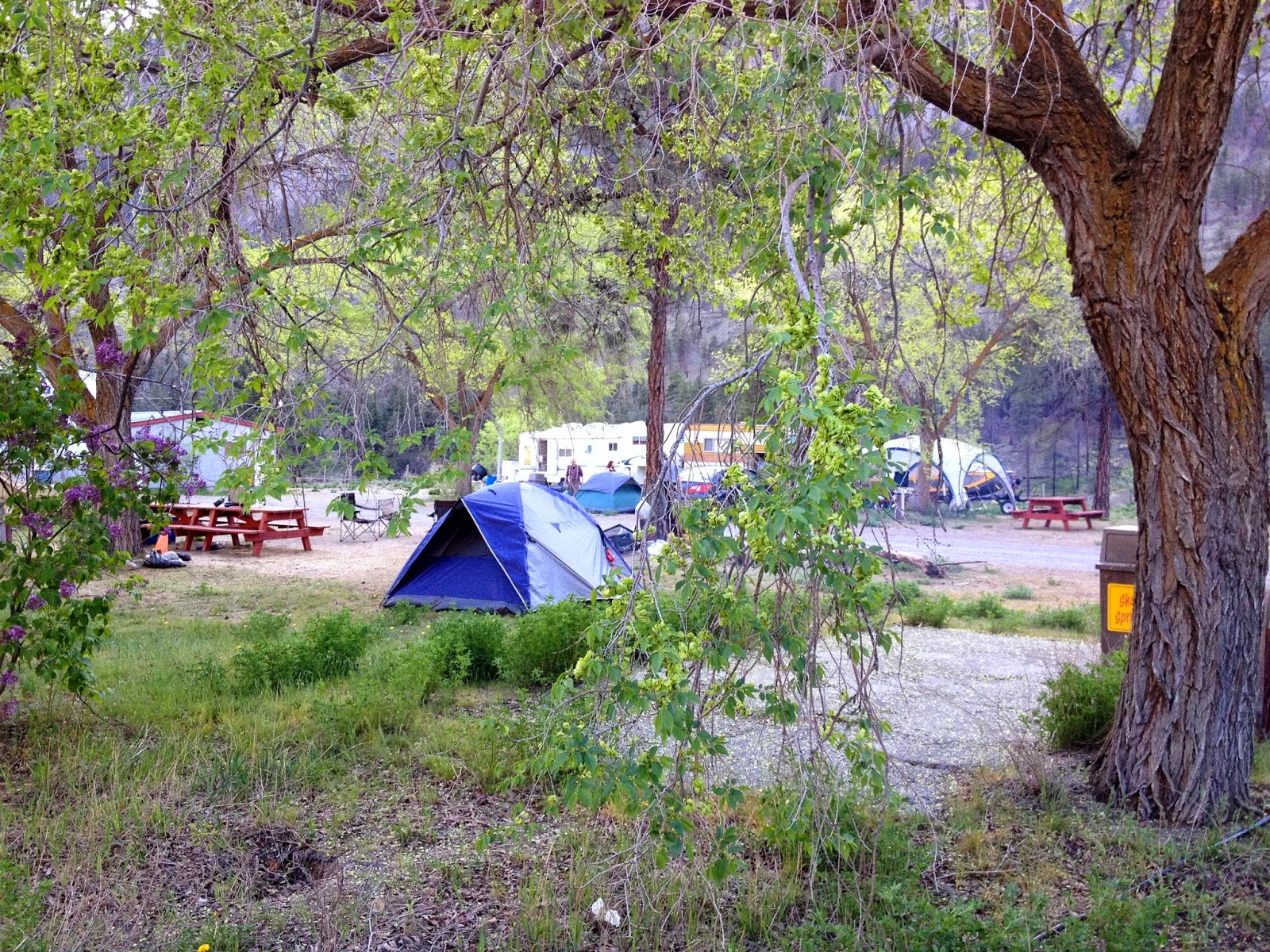 Chris spoke to him about our staying the evening.  He was good with the idea, but had no hook ups for us and wanted twenty bucks.  Chris looked at me and said..."I think we'll keep going, baby."
Too bad because it was quite pretty....:-).  I mean, seriously....we can pull off to the side of the road and have the same amenities (NONE)......for FREE! ha 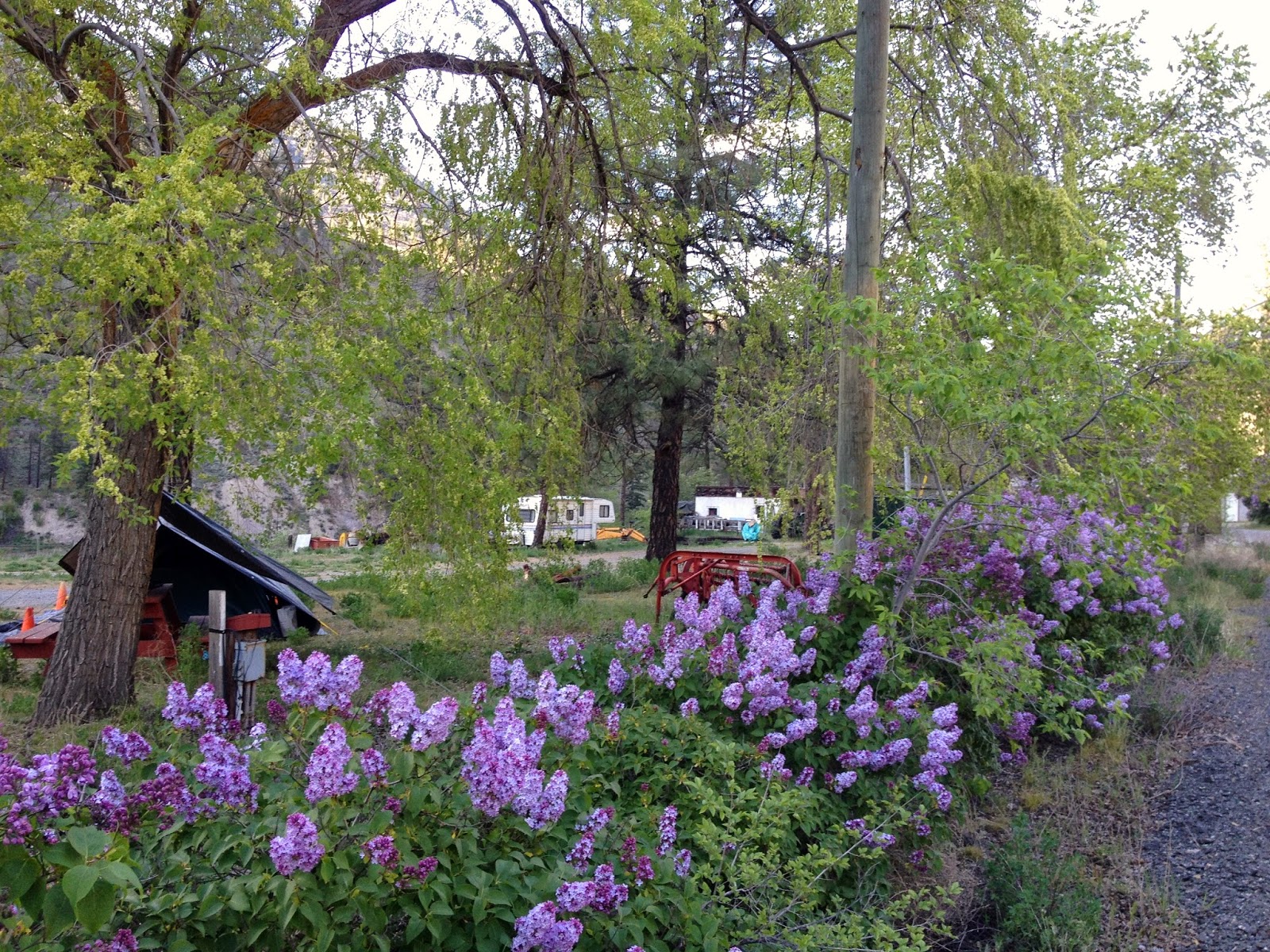 Just about 10 miles up the road, we found this place; Jade Springs RV Park.  The guy had one pull through slot in the whole encampment.  Not because the others were full; but because he had ONE. 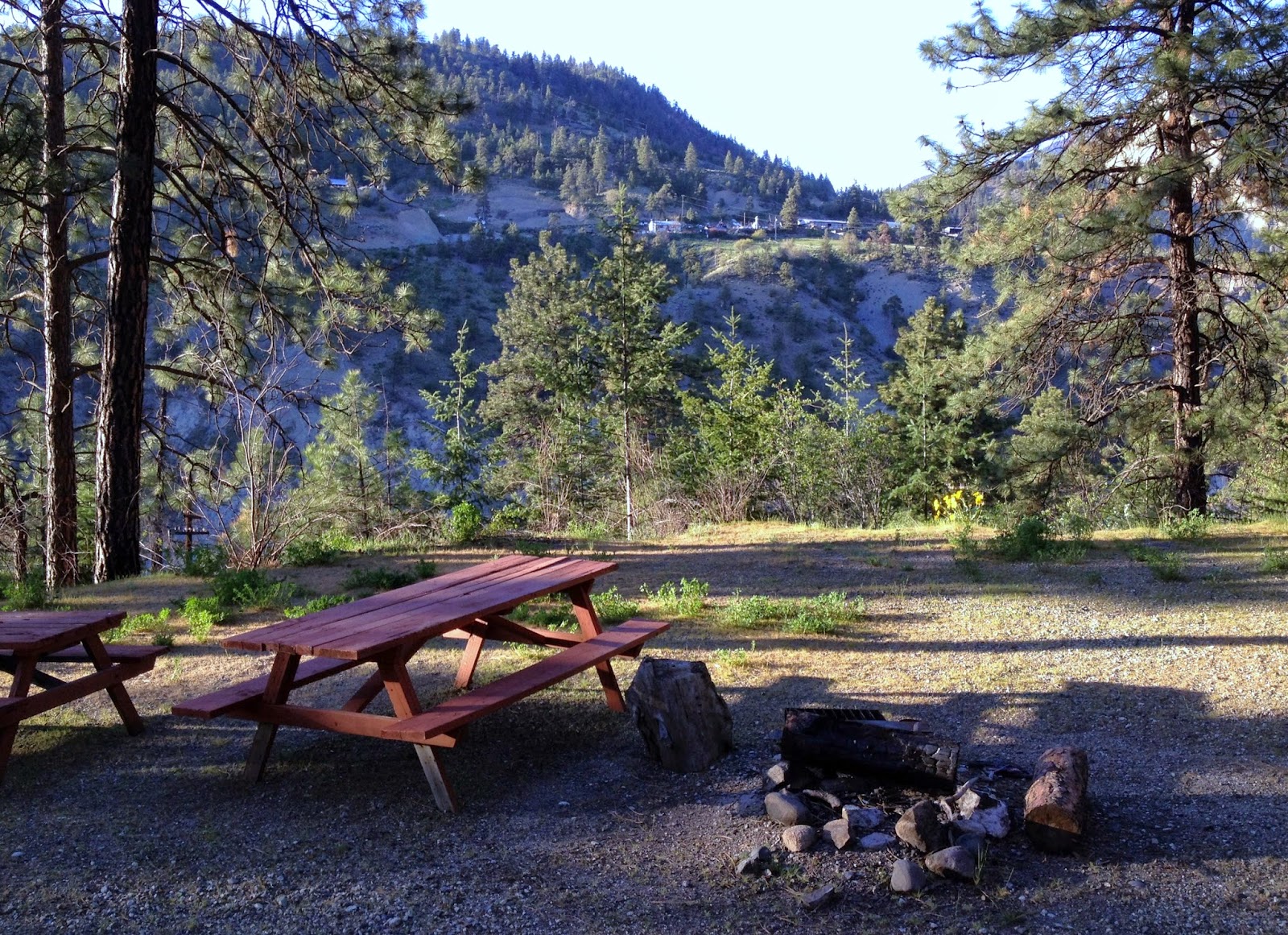 Here is a look from the co-pilot side of Grace. 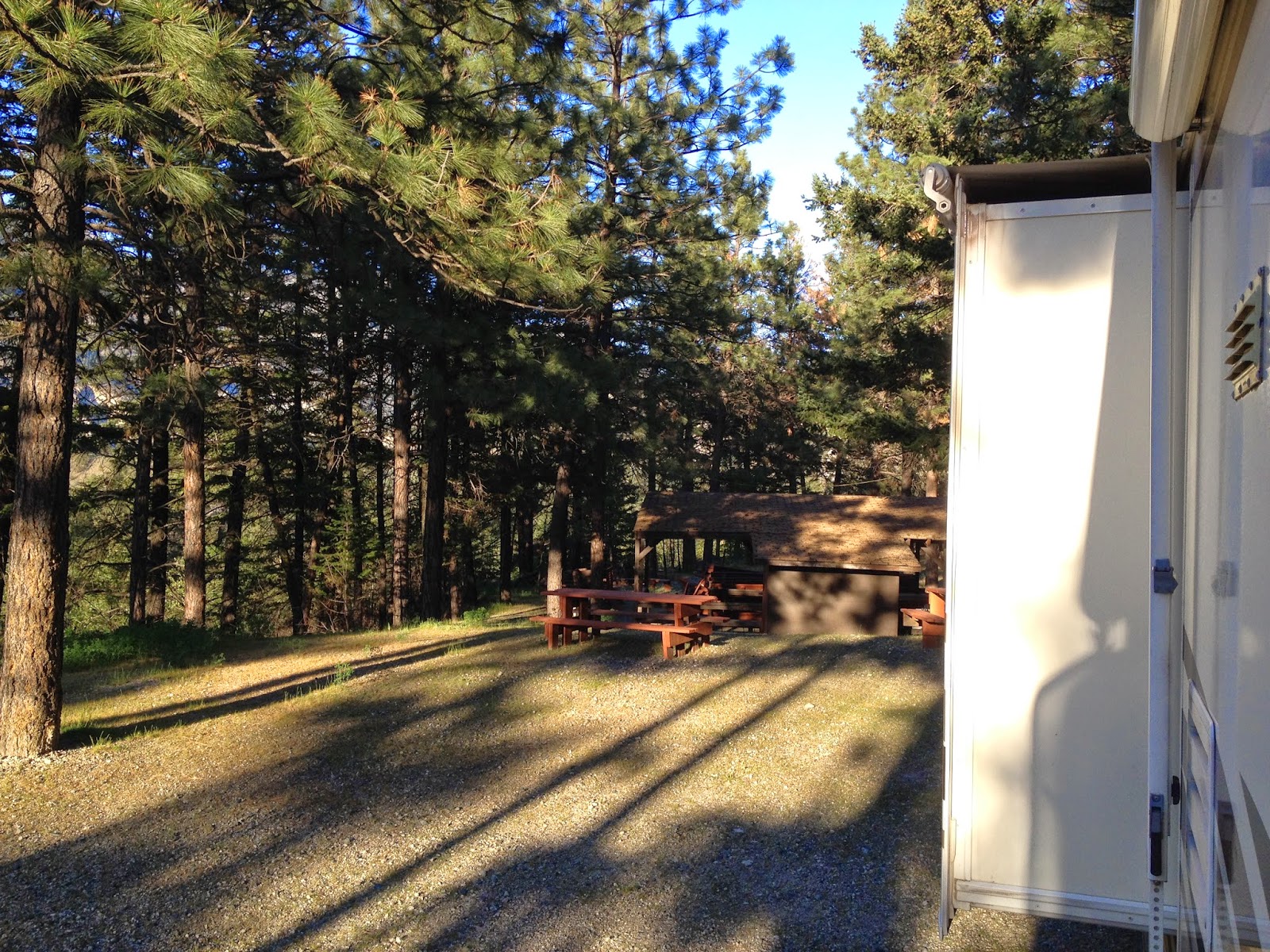 After we got everything set up; jacks lowered, slides out, power hooked up, it was time to eat and relax.  Chris was going to whip up some left overs from lunch and call it dinner.....:-).  Works for me! 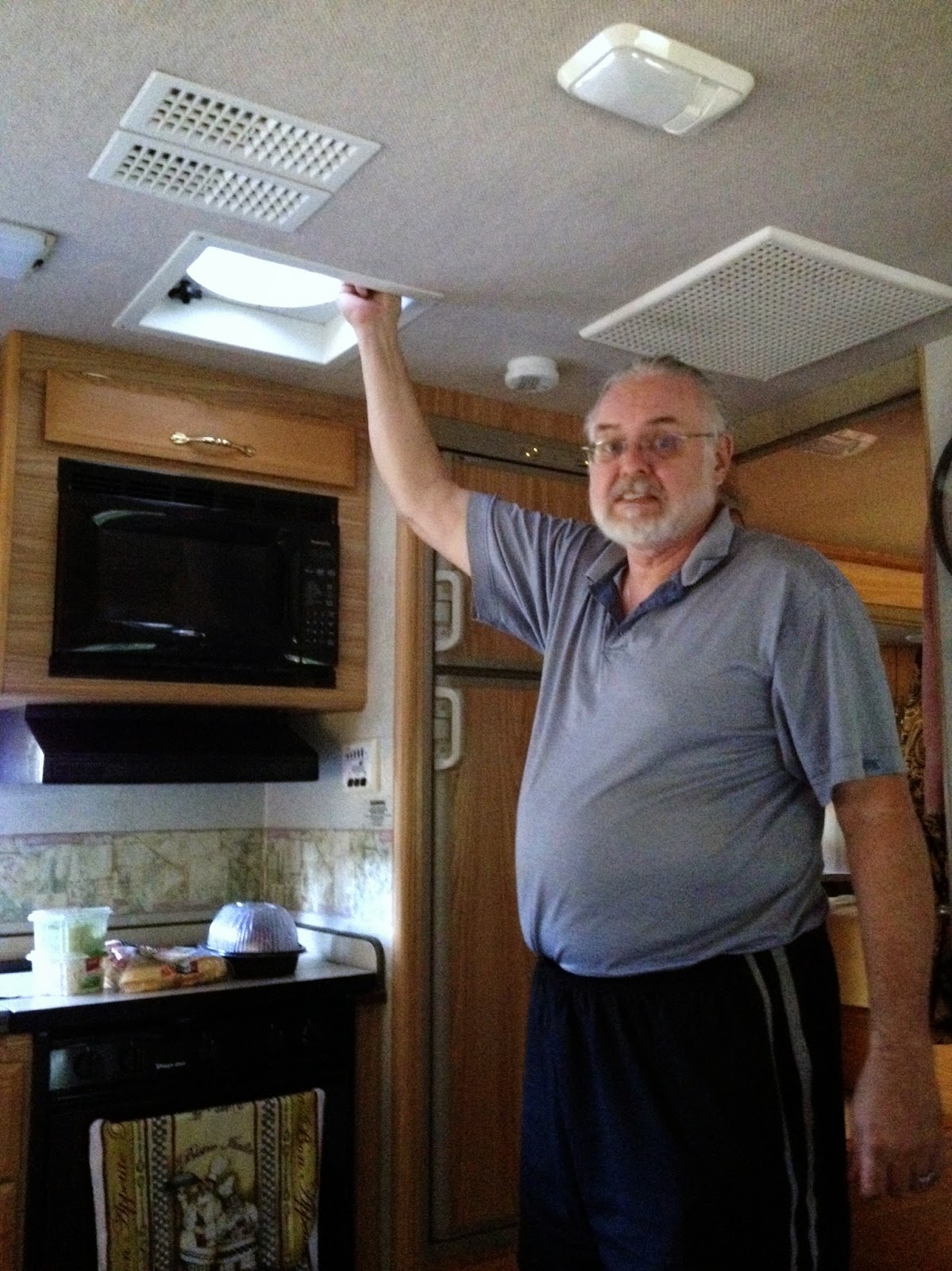 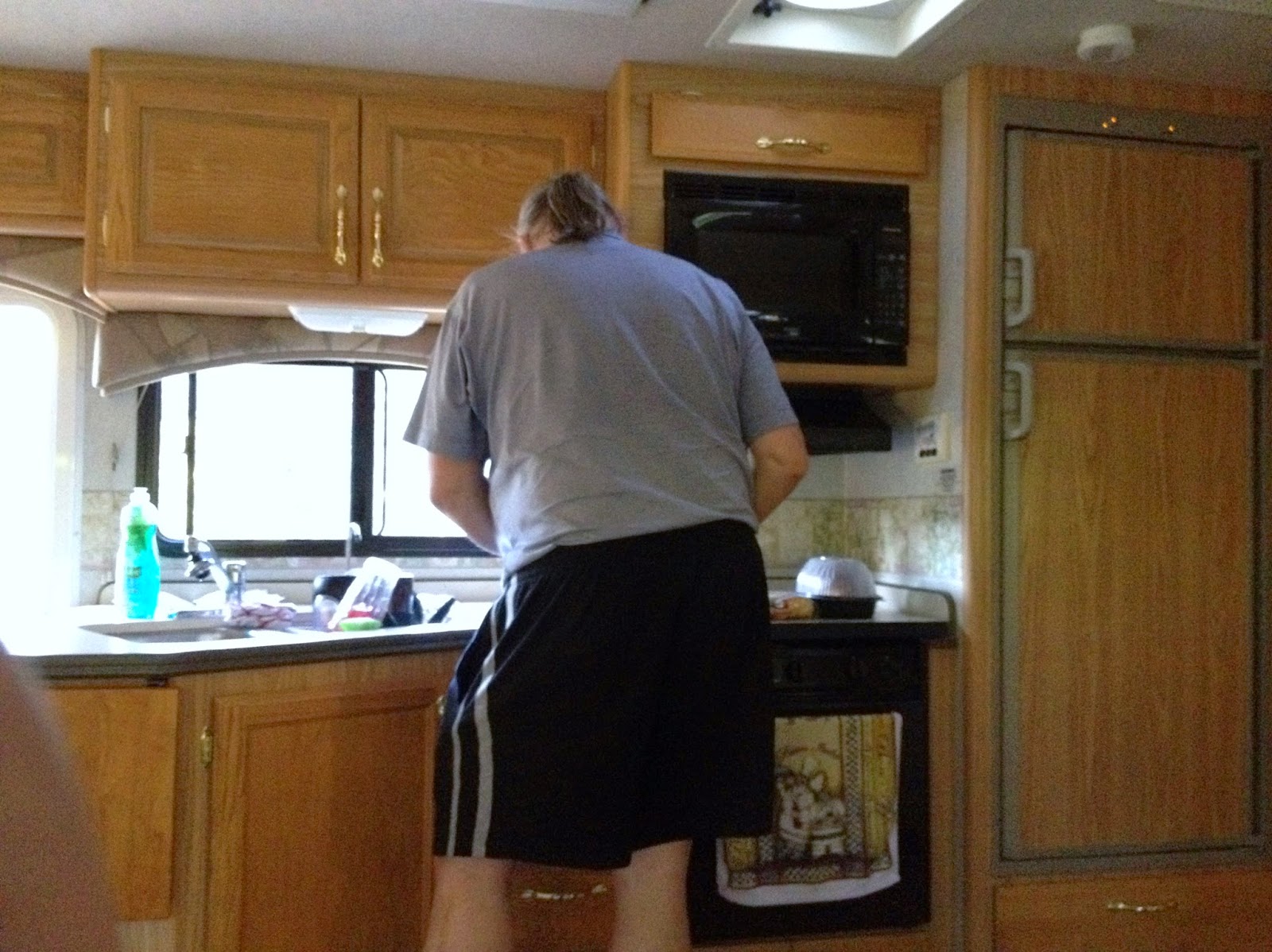 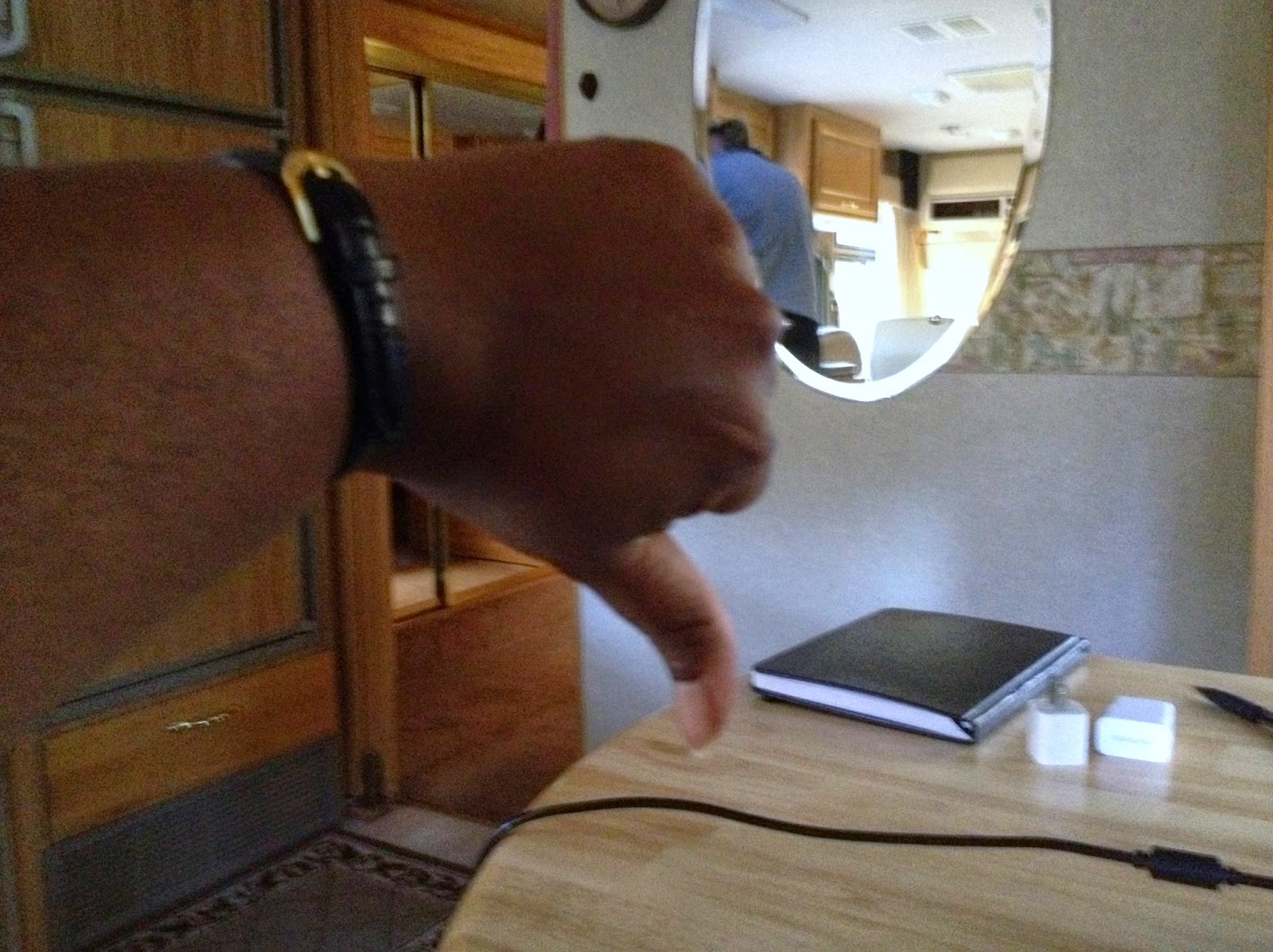 Well, I'll see you somewhere on the road with probably only one eye open!