The morning came early.  I think I slept through the night except for one trip to the rest room.  the funny thing is that Chris and I woke up at the same time and decided we might as well get moving.

We headed down stairs earlier than we had been to grab breakfast and hit the road. 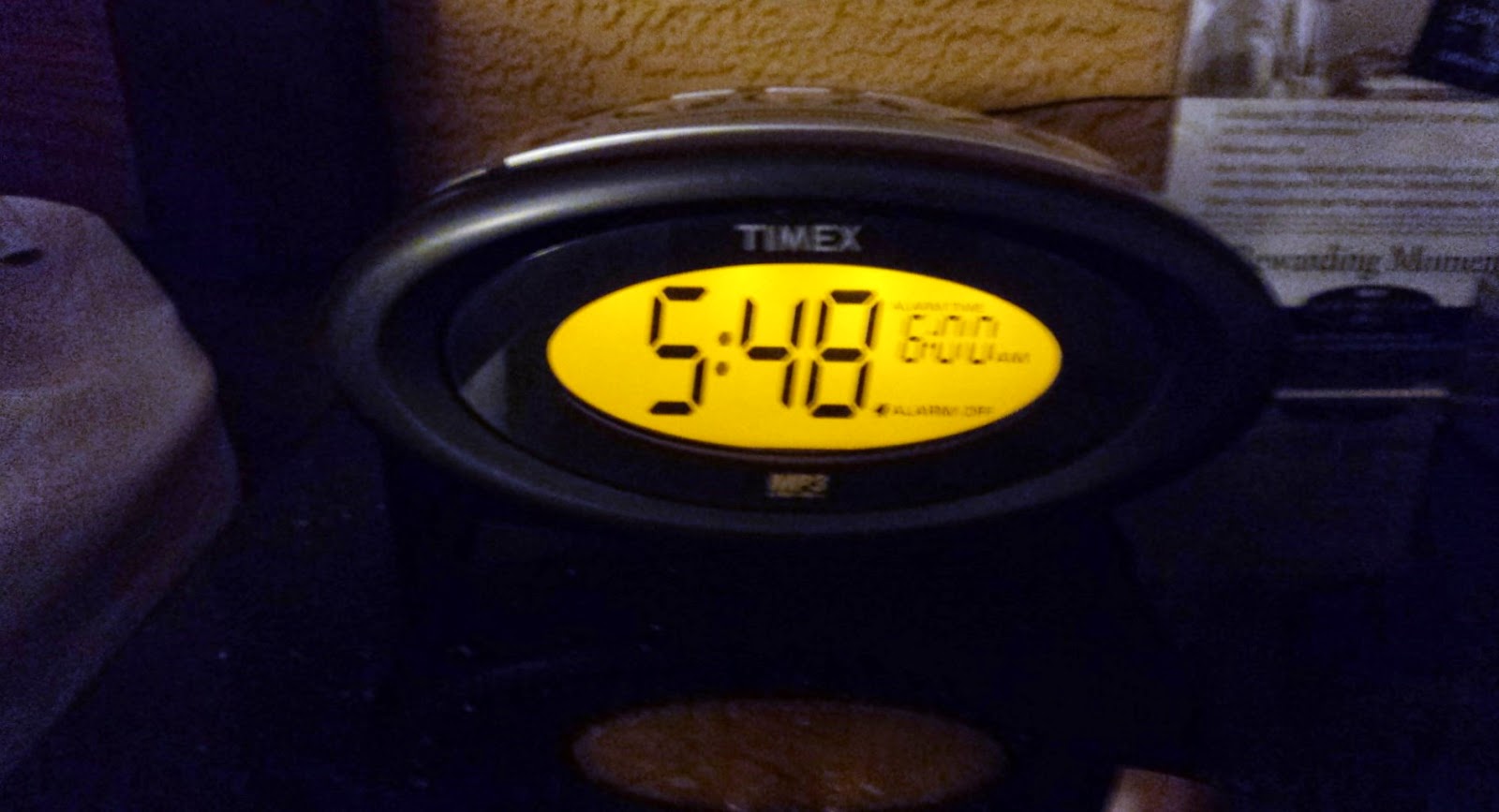 We had not heard of this hotel, but we were growing tired of the ones in our normal chain and decided to try this one called the Drury.  It is a private, family owned chain.  I can't believe I had oatmeal for breakfast.  And it wasn't that nasty, mealy, instant stuff either. 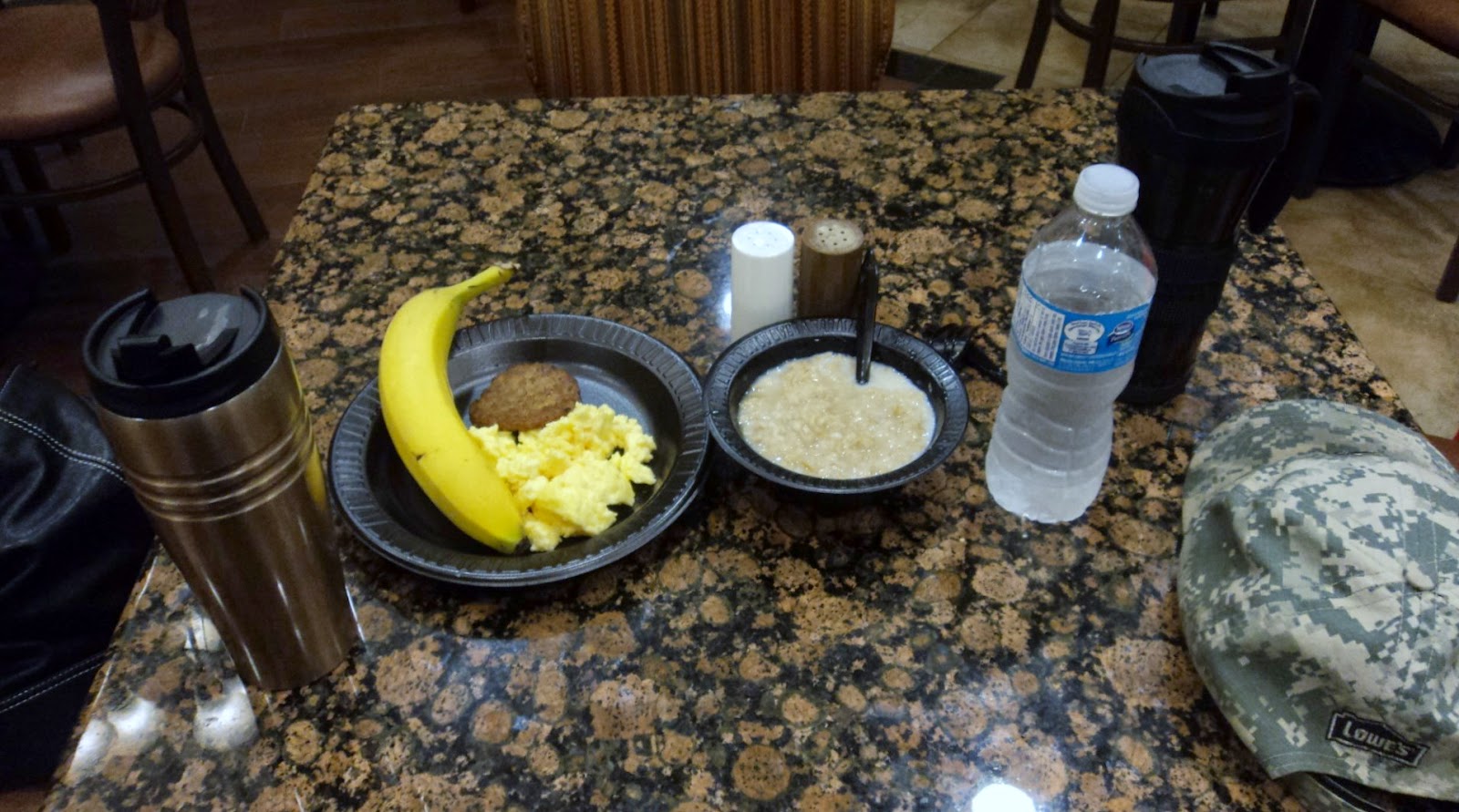 the dinning area was quite large compared to the others we were used to. 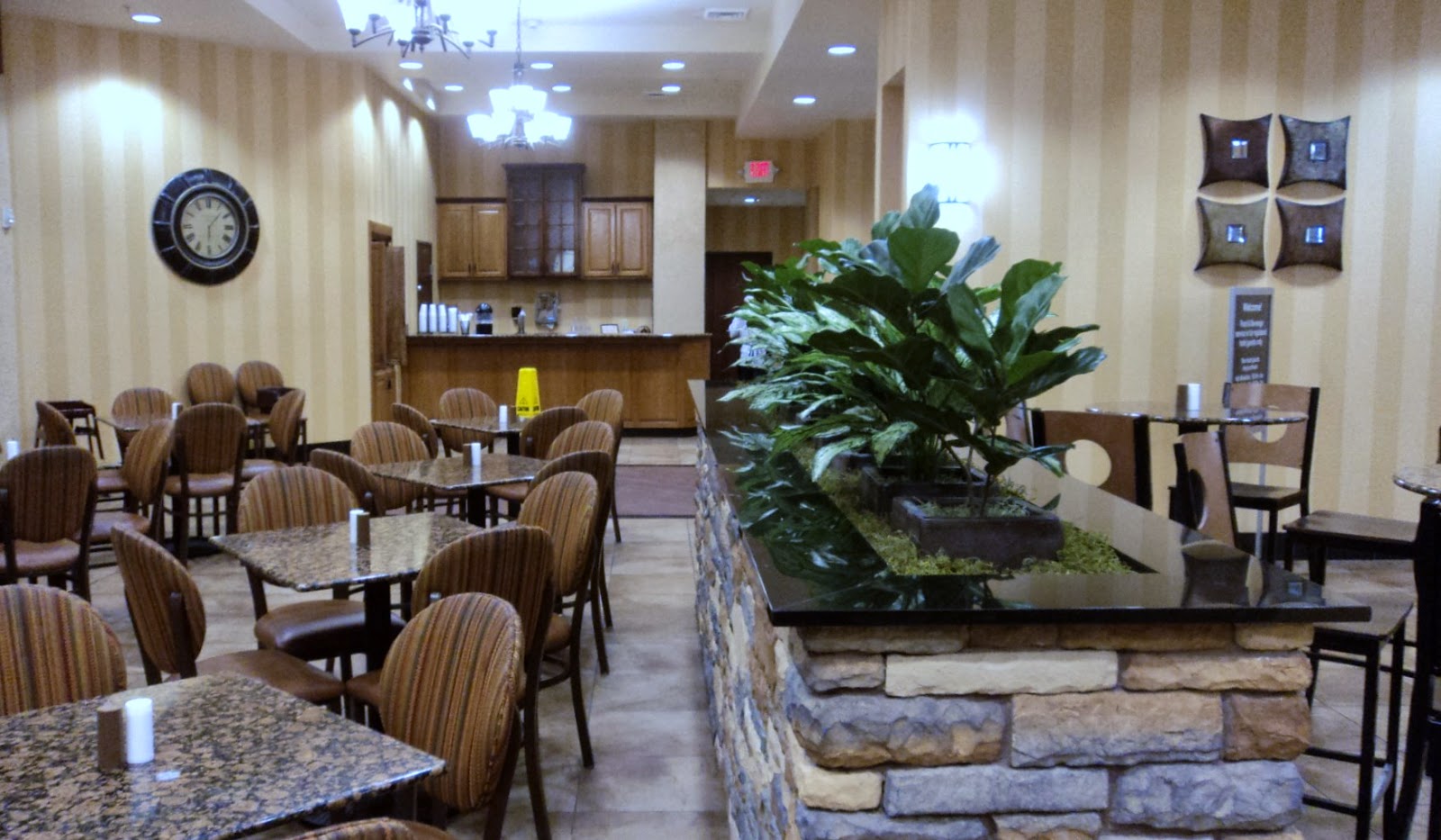 I'm not sure somebody had gotten enough to eat or enough sleep, but we were on our way nevertheless. 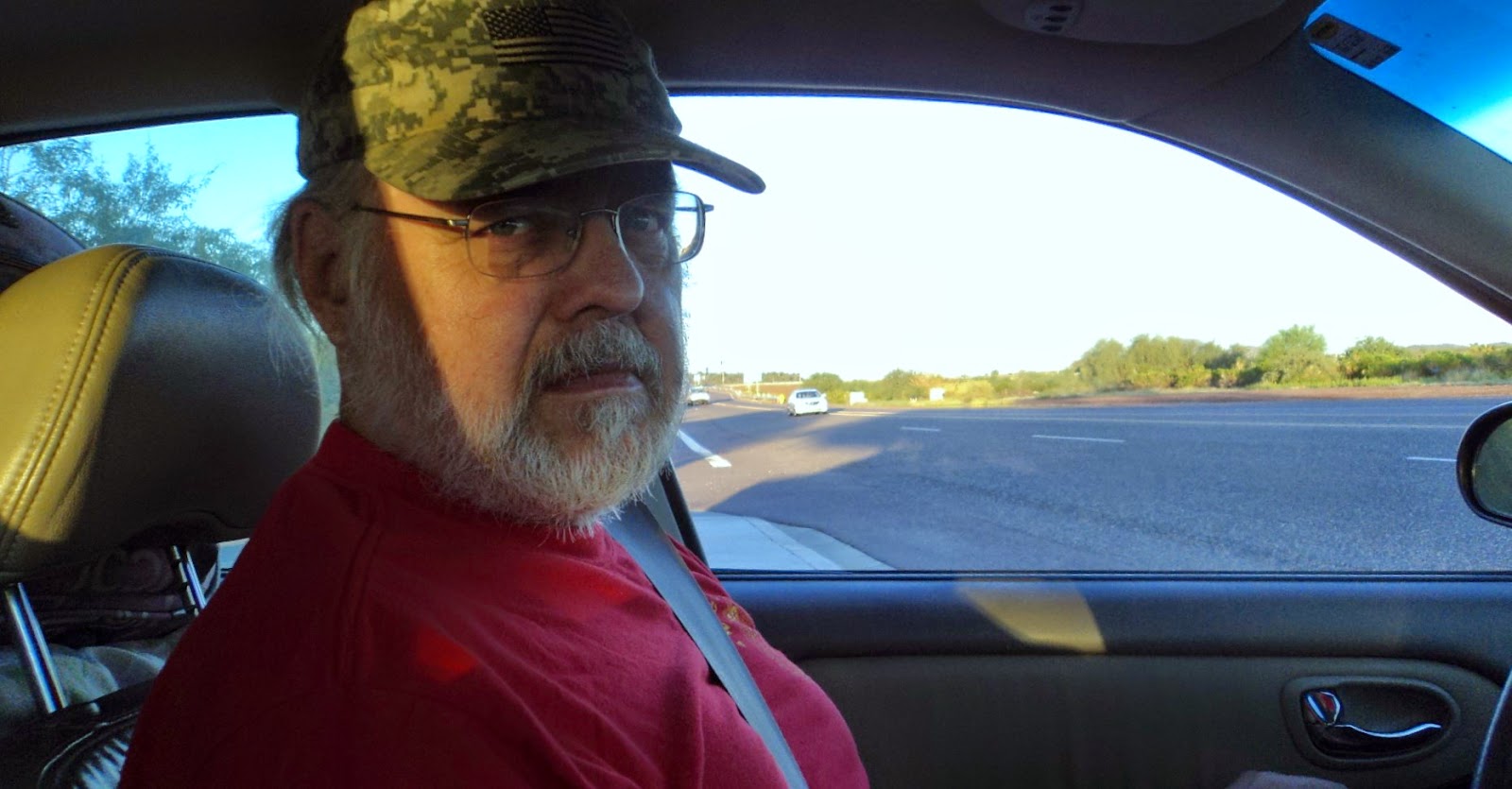 Not too far into the trip we decided we had better get some gas. 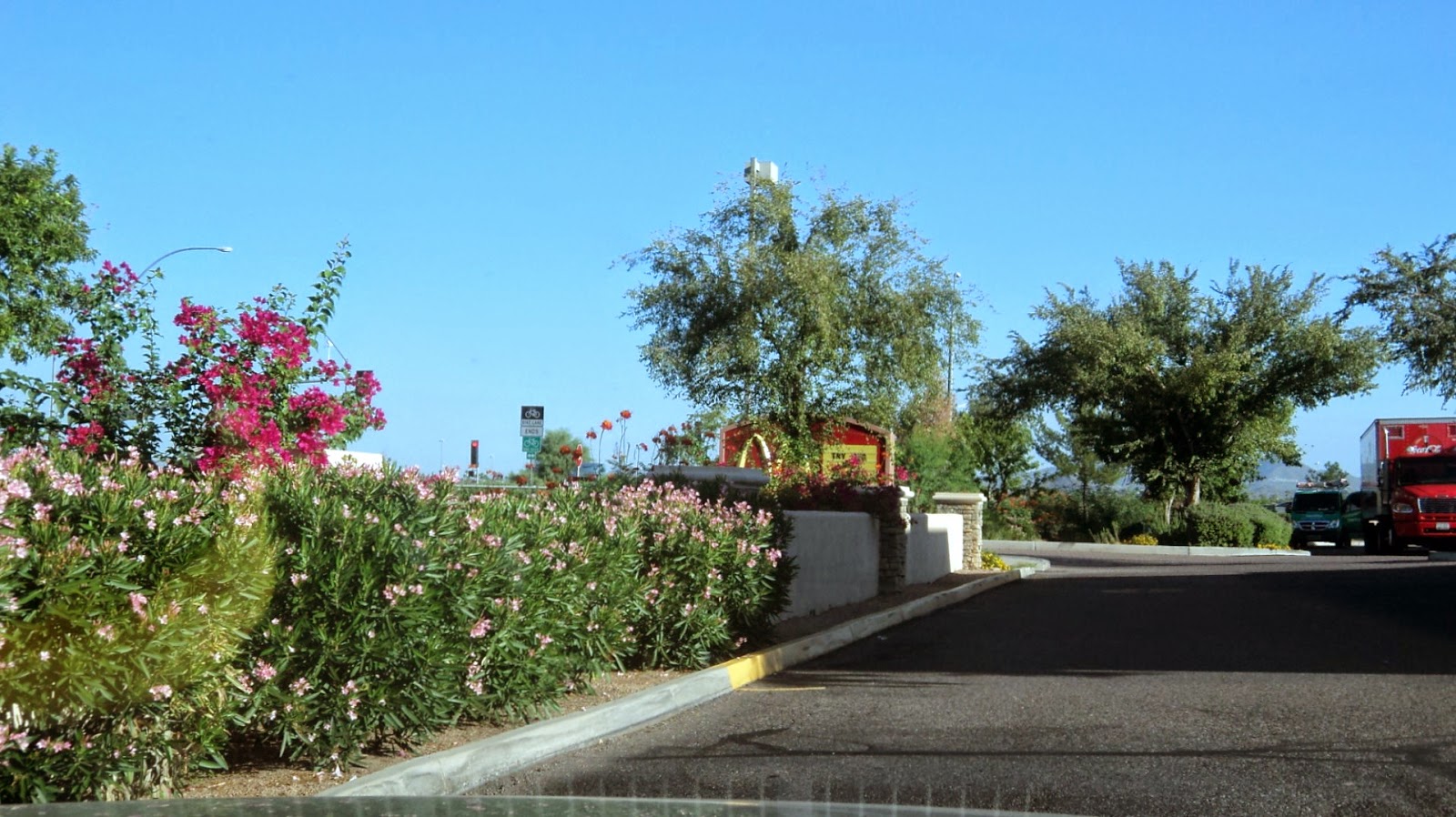 We are always pleasantly amazed when we come to the states and buy gas considering we are paying well over 6 bucks for gas in Canada! 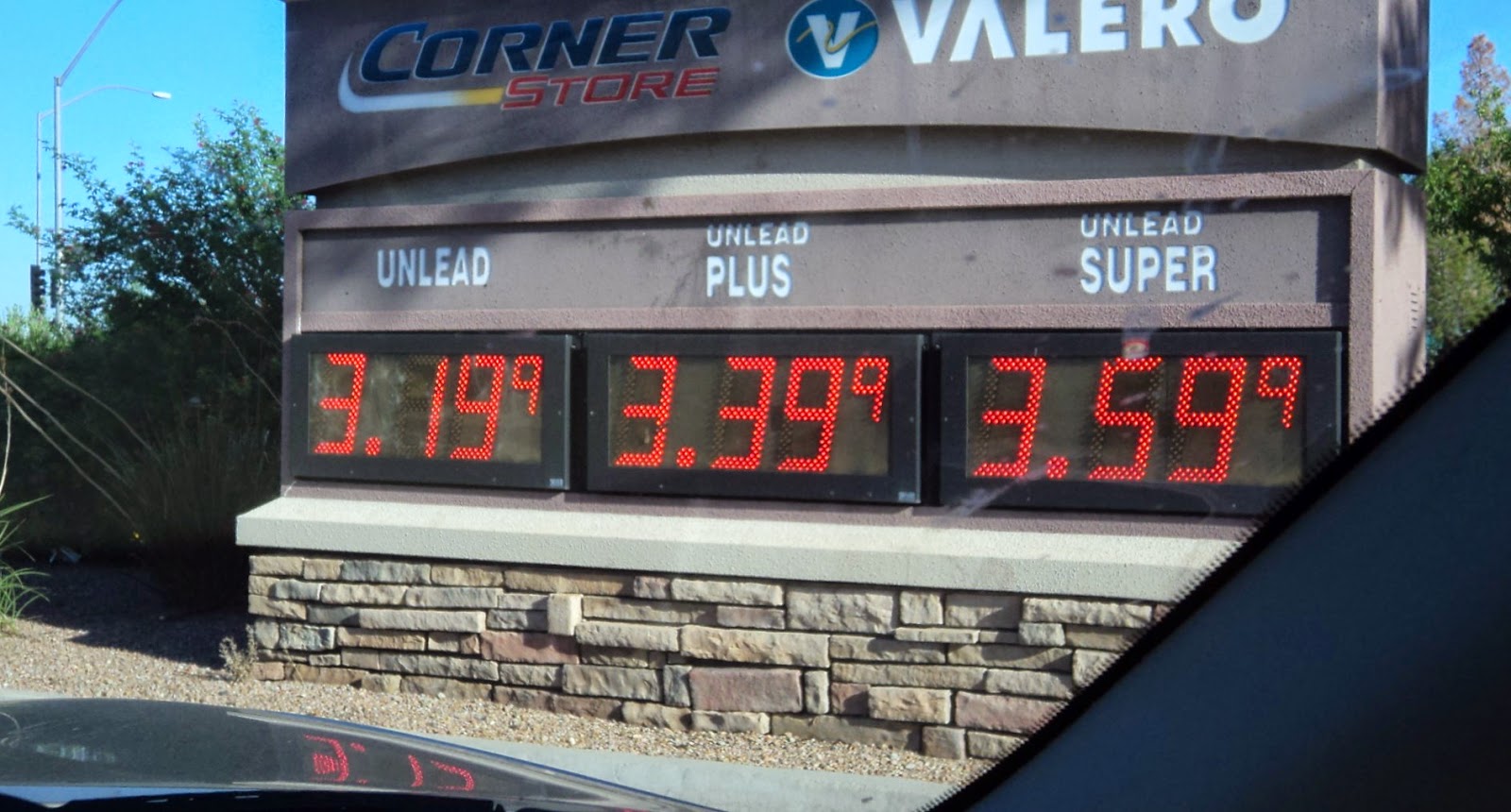 Rascal starting giving us problems and the straps were loosening up.  So, we stopped to get that taken care of....again. 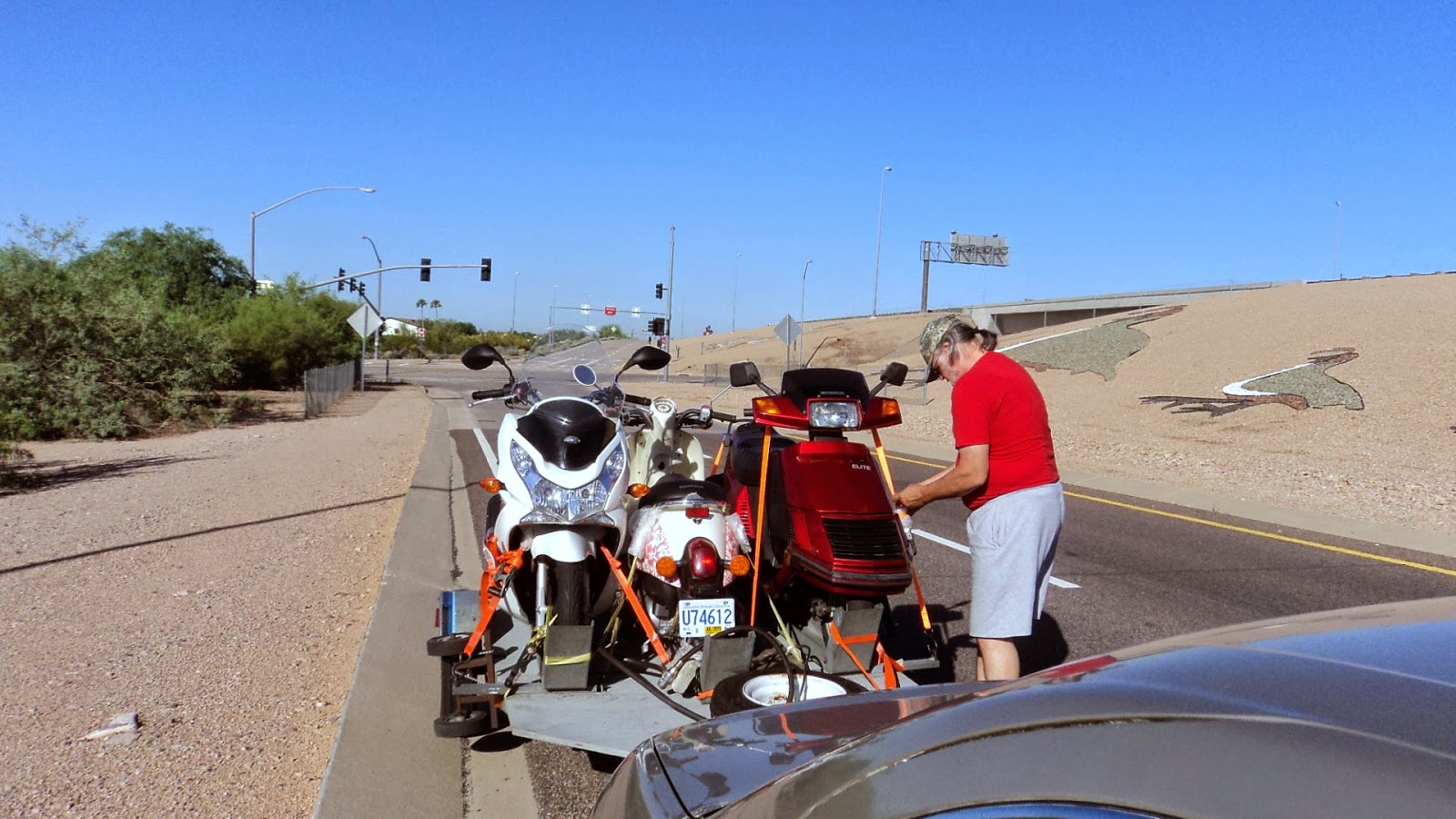 I noticed that the highways in Arizona are beautifully decorated with Indian art..... 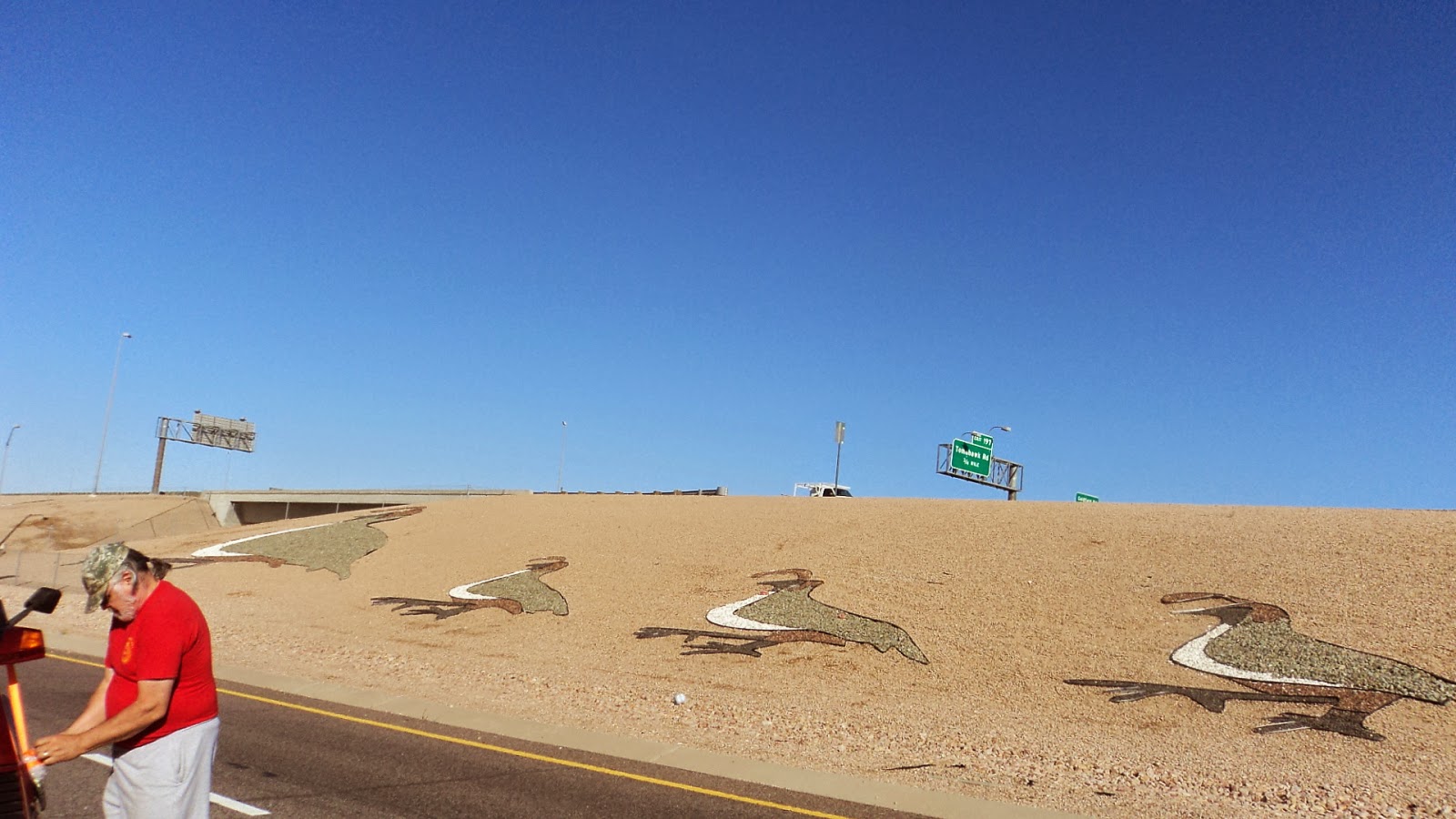 And the landscape is always changing.  There is often a lot of nothing..... 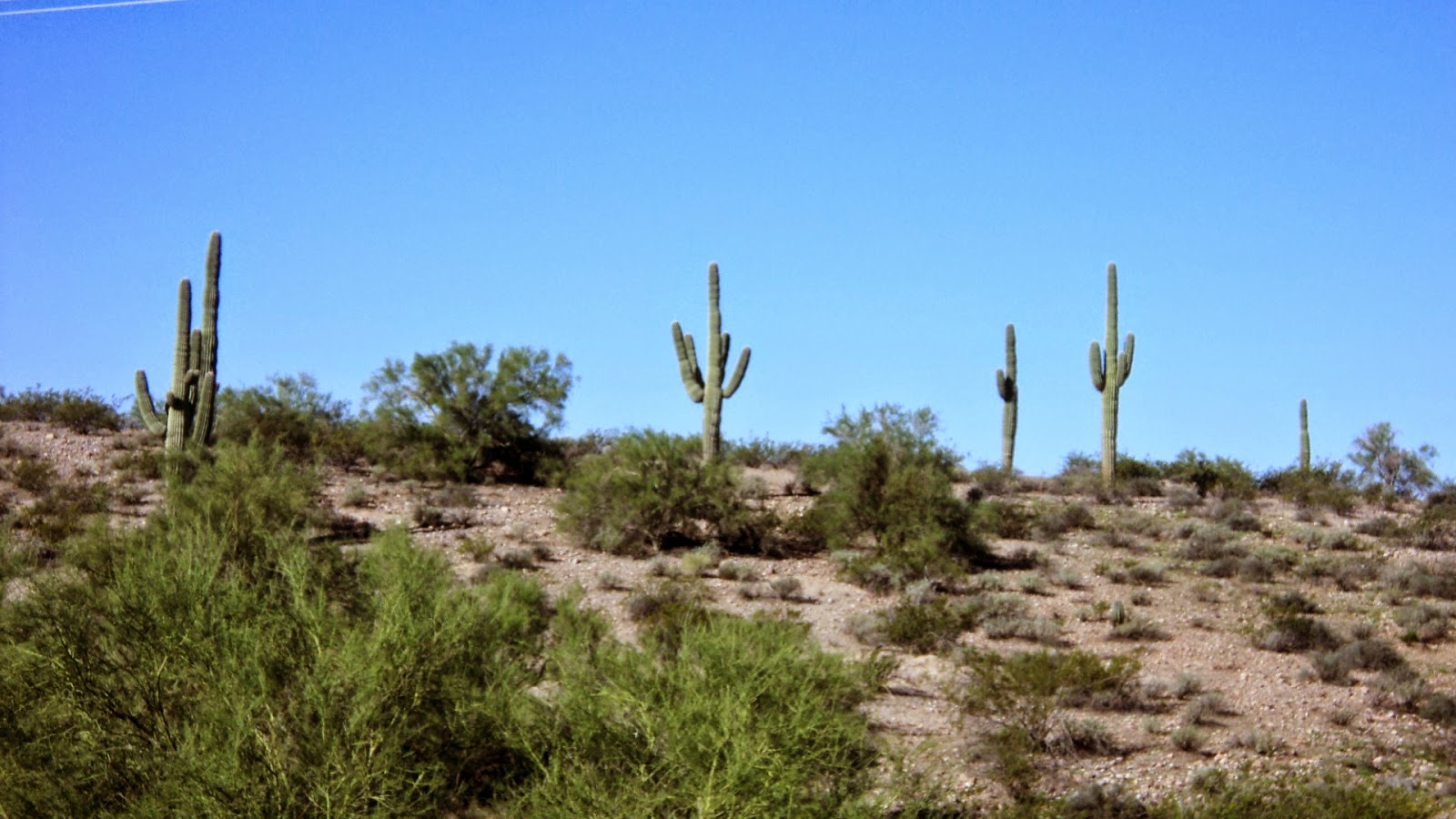 I was glad that the skies were free of rain.  At least as far as I could tell.  I concluded that they must be a lot of water somewhere as this desert sure featured a lot of greenery. 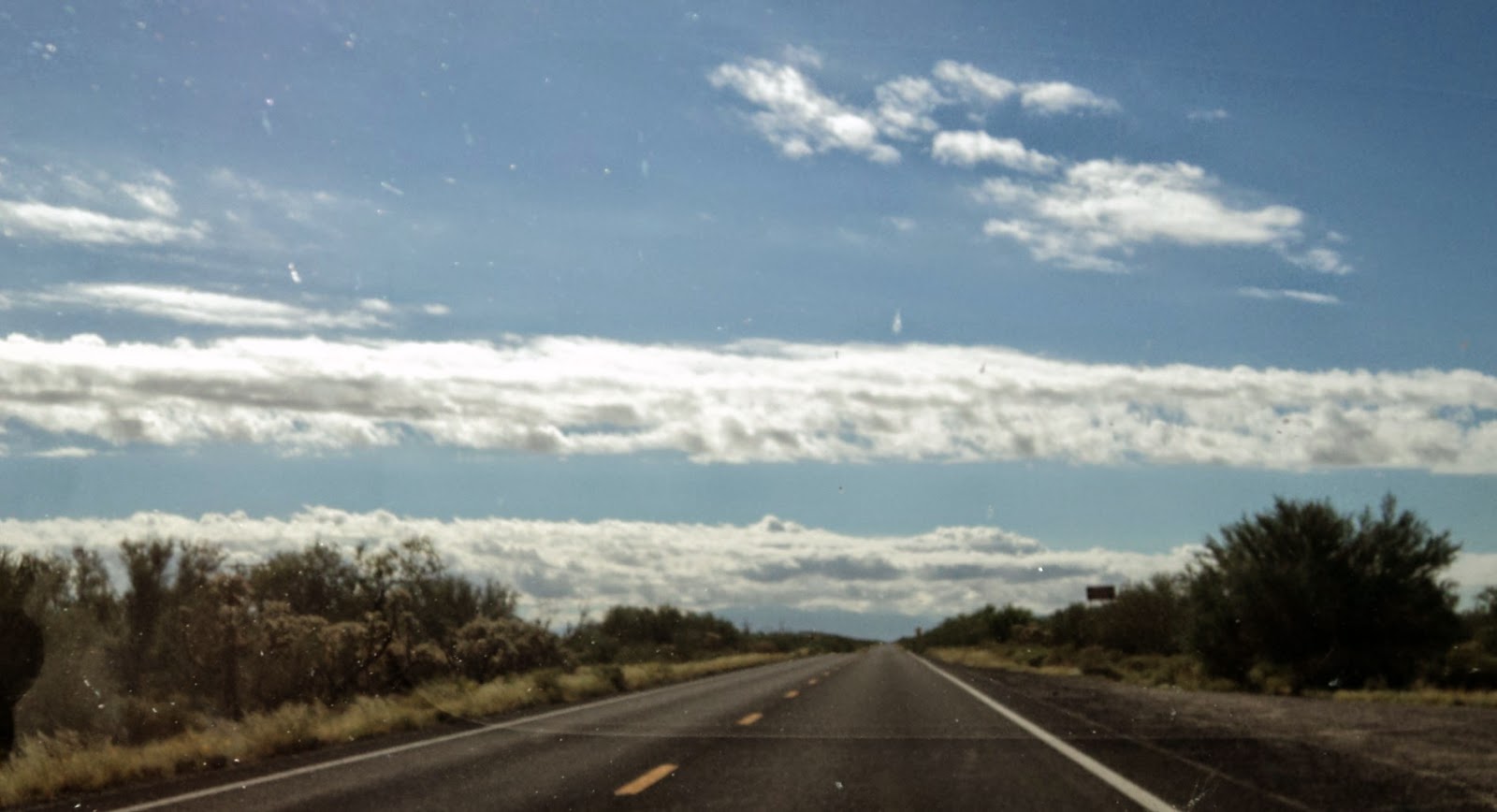 We/ I try to gas up at every half tank.  The idea of getting stuck in the middle of nowhere without gas or cell service does not appeal to me! 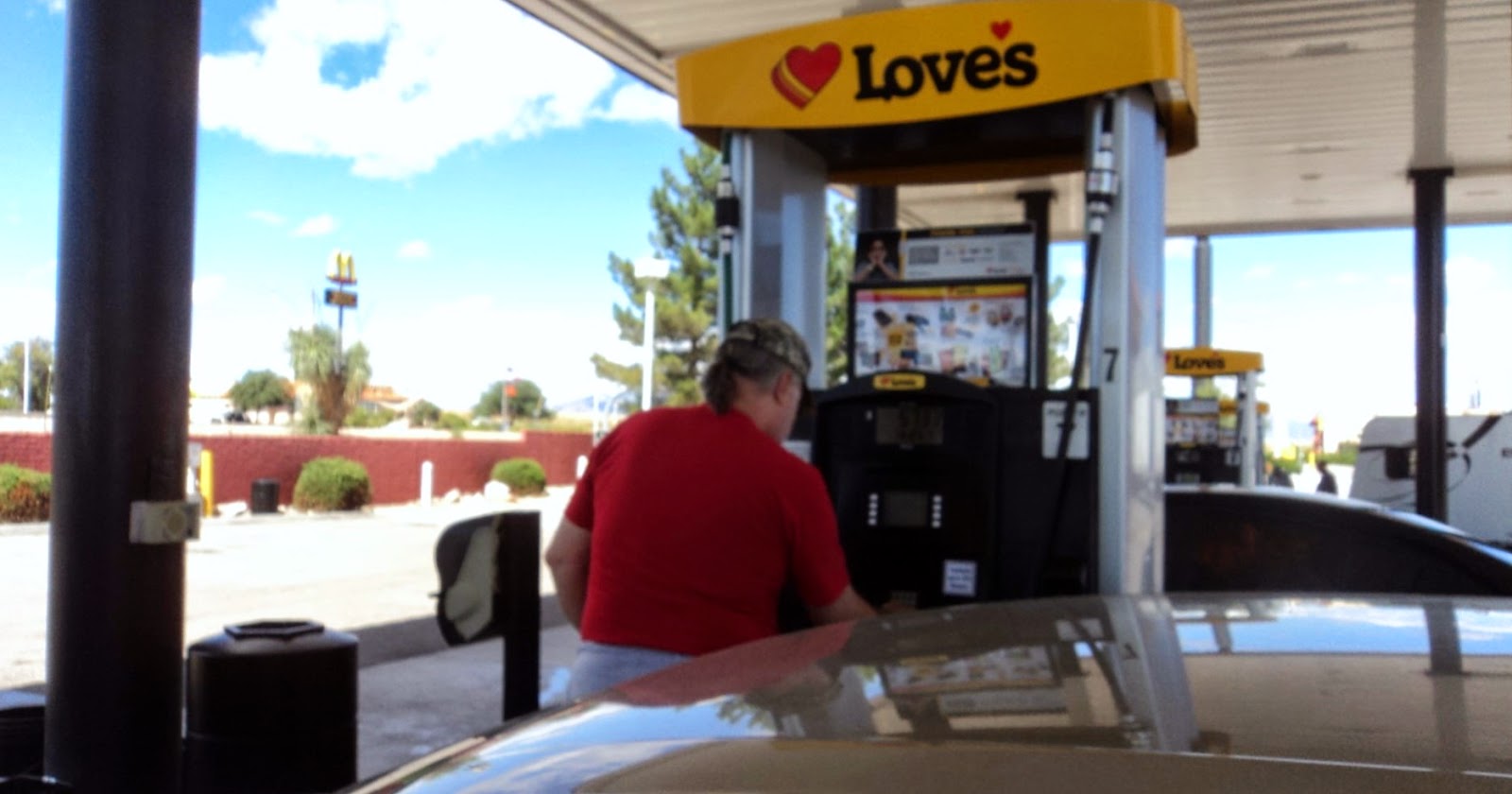 And a potty run!  Don't forget that....haha.  Not too many rest stops along the way in the desert. 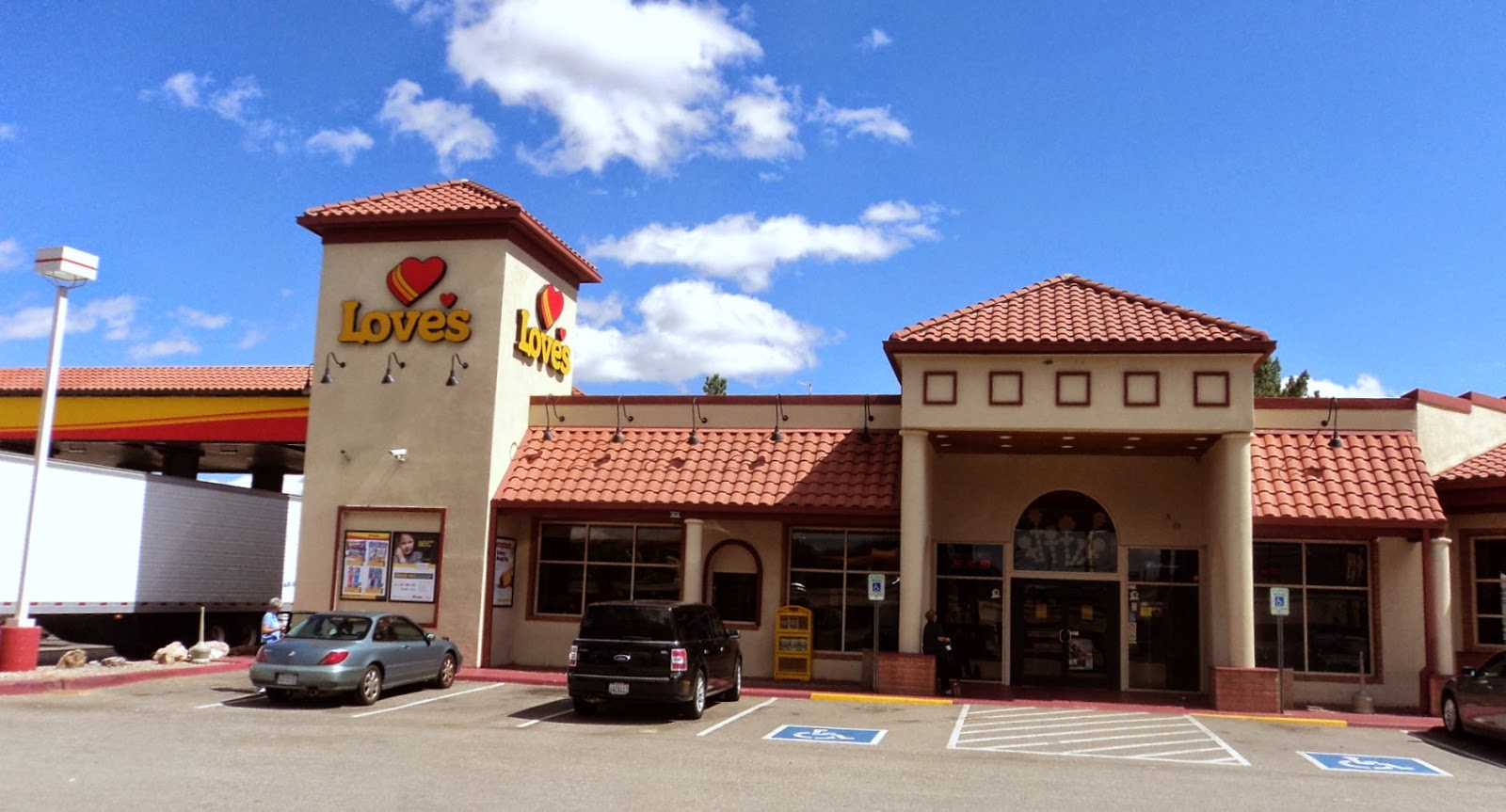 By now, it was lunch time and we decided on a spinach and chicken salad for lunch.  It was big and quite filling. 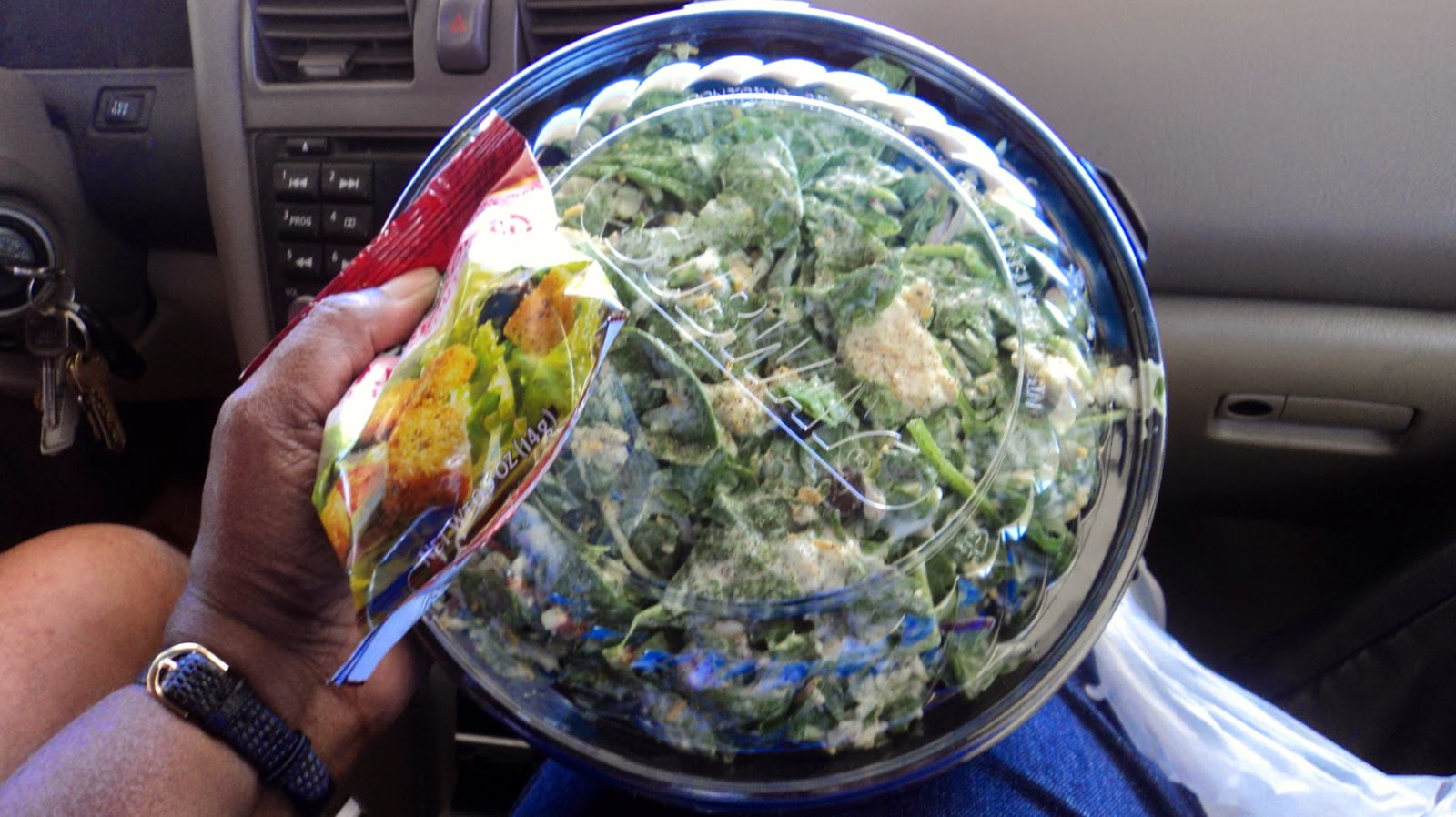 A few miles down the road the scenery changed again.  This time the "dinosaur poo" started to show up. 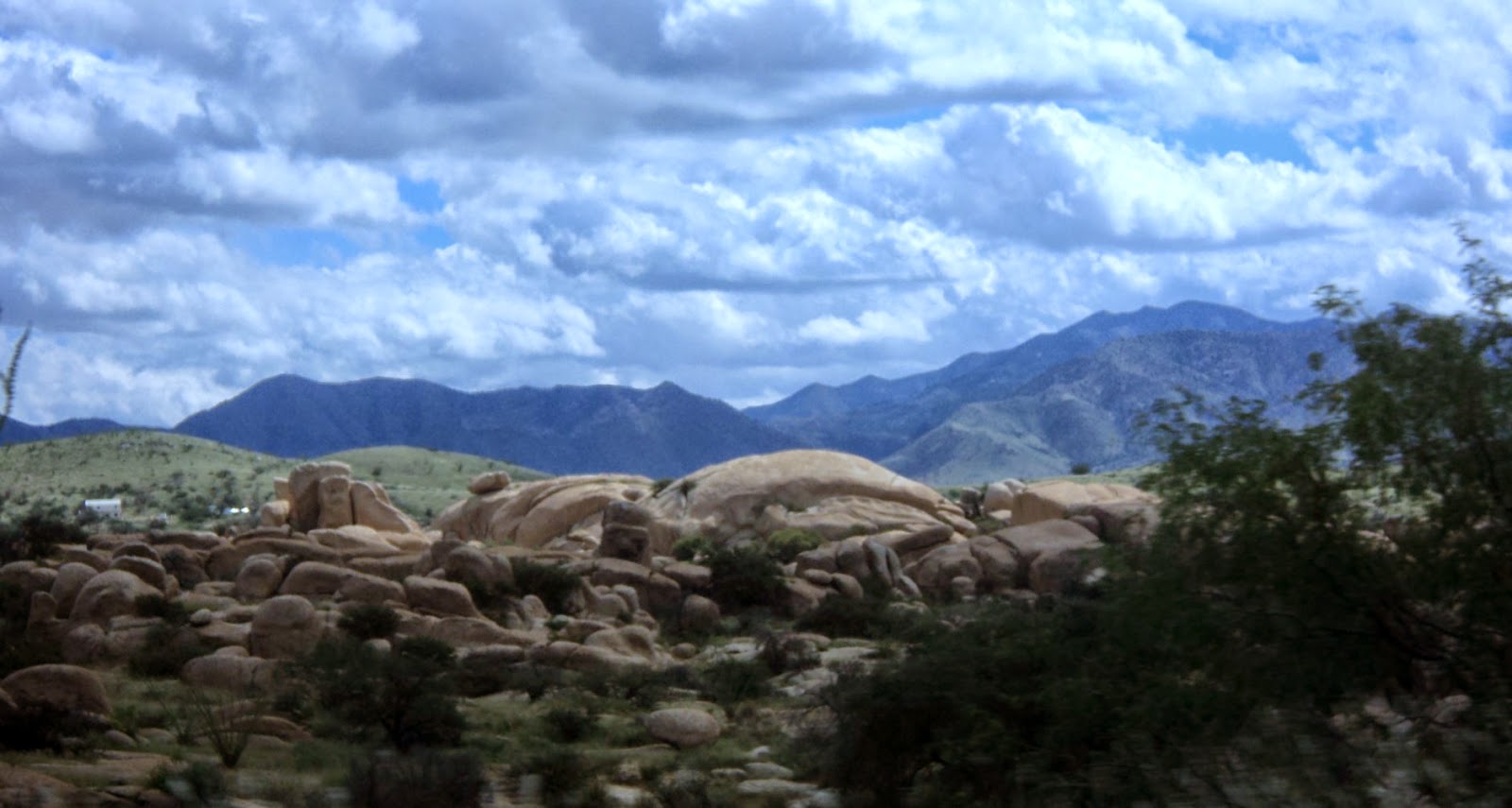 I call it that because some of the rock formations look like big piles of .......well, poo.  ha 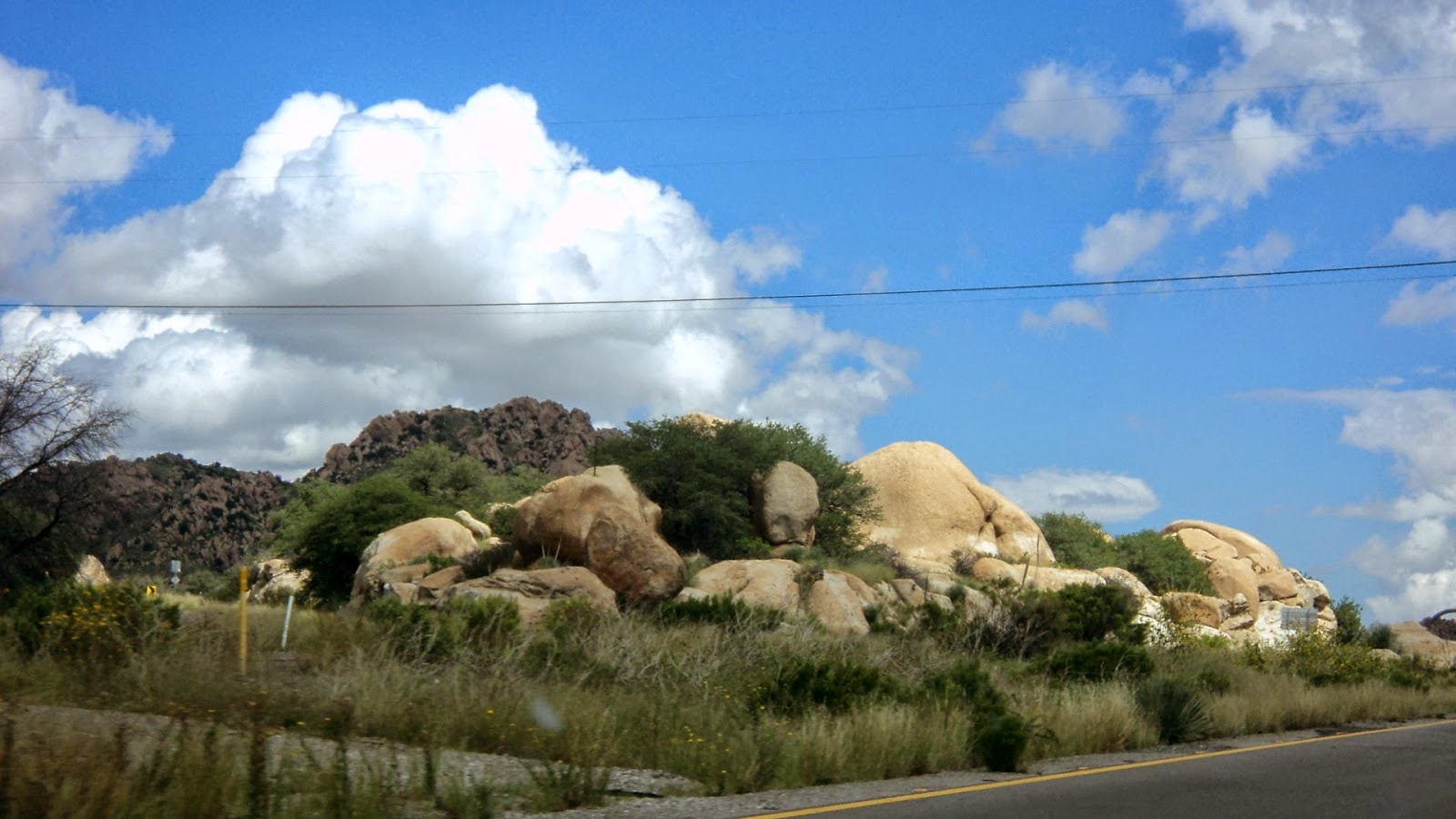 I know it is hard to believe that more hours have gone by again.  But time has gone by and this is another rest stop.  We decided to sit outside of the car for a while and take in some fresh air. 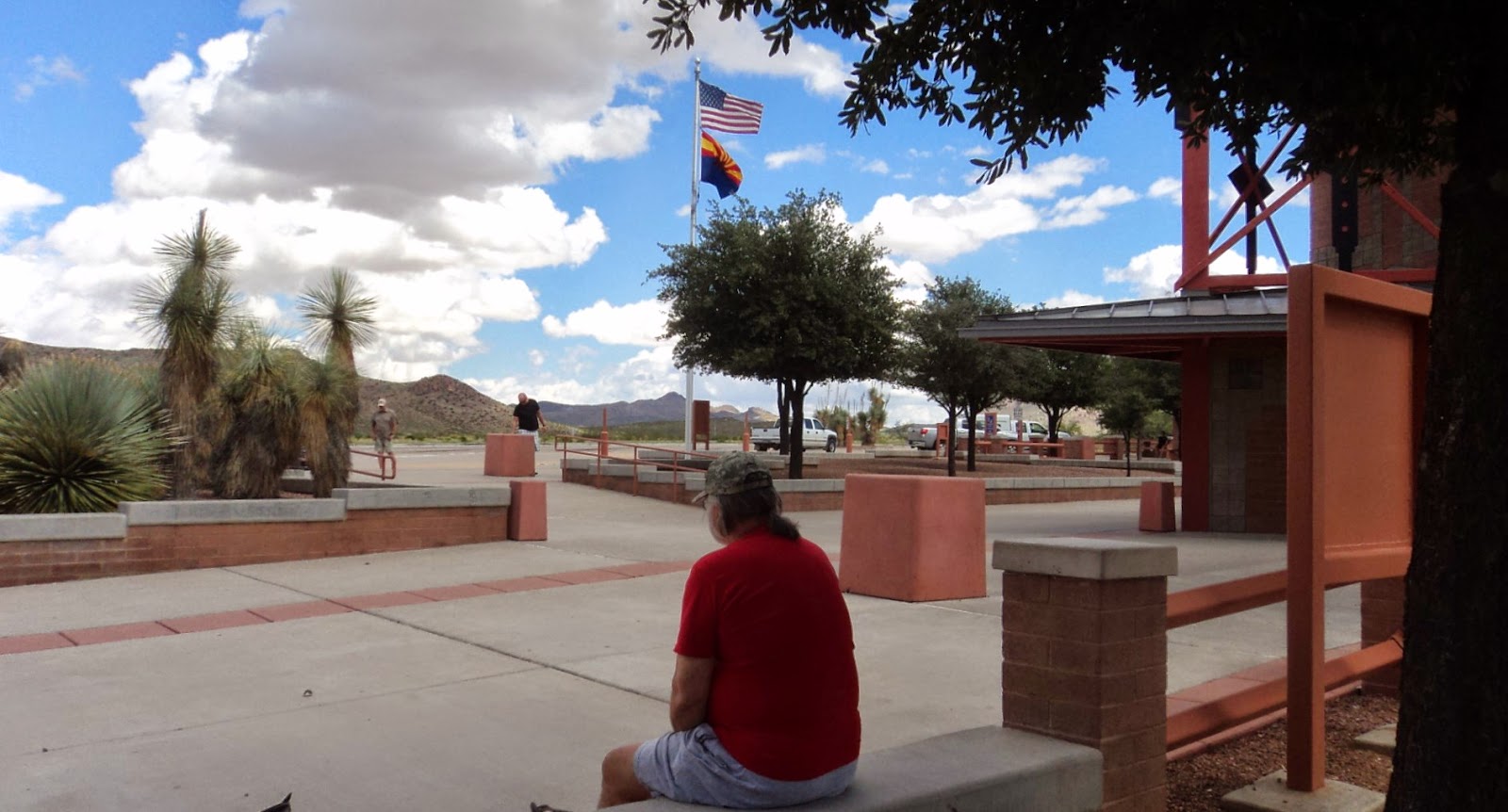 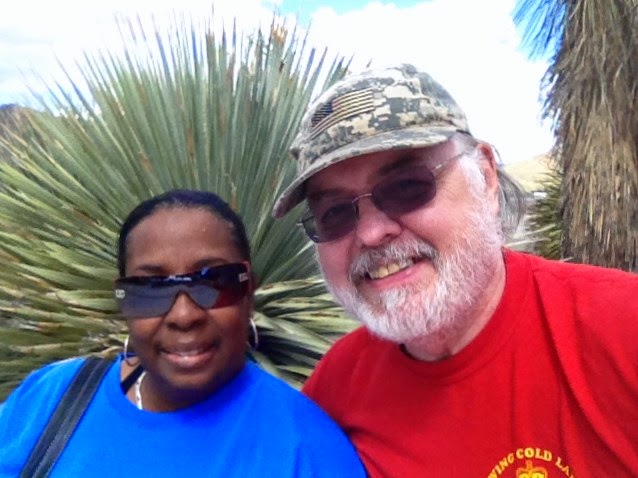 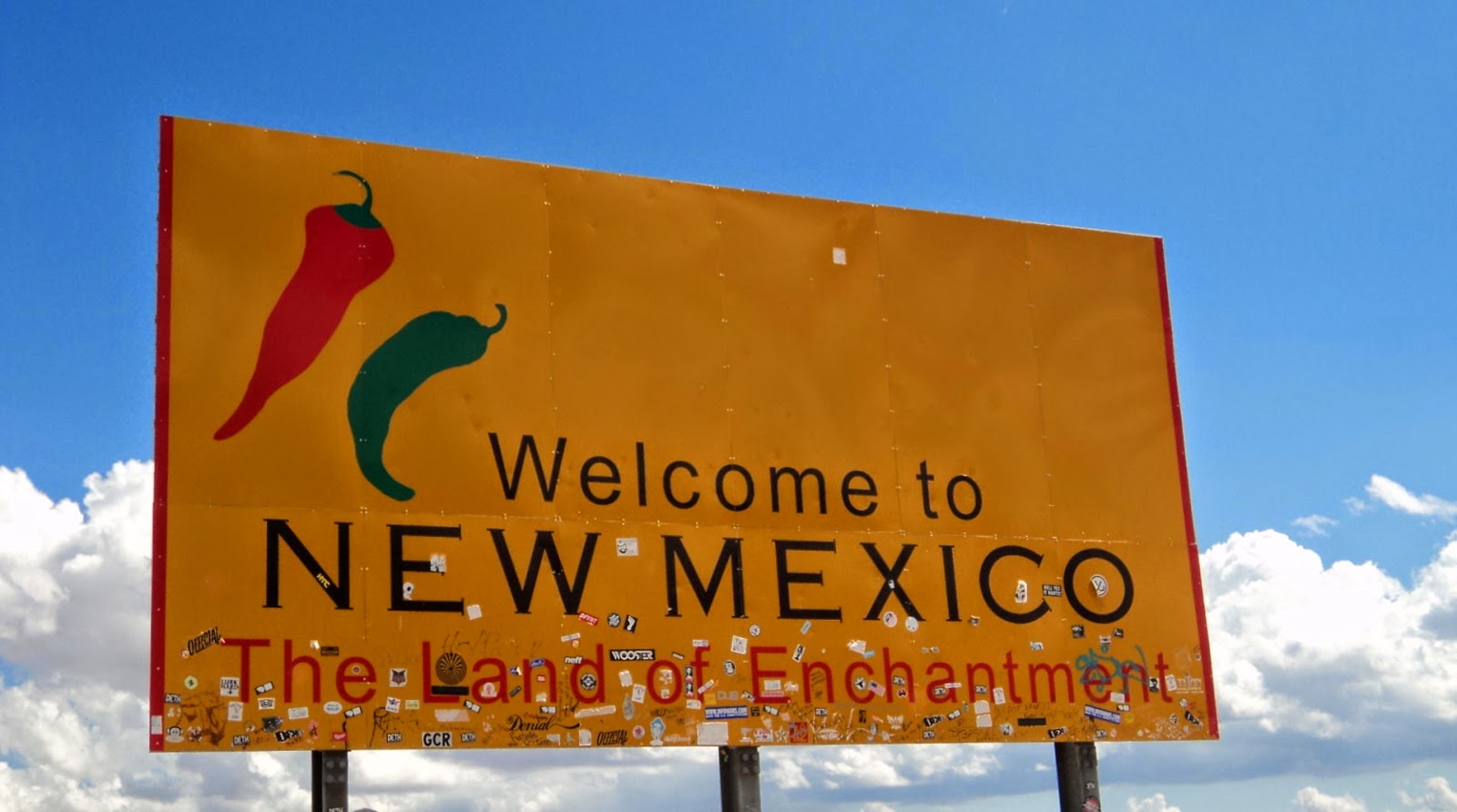 I'm told I fell asleep for this picture.  I don't want to imagine for too long that "somebody" was taking pictures and driving at the same time!  smh....... 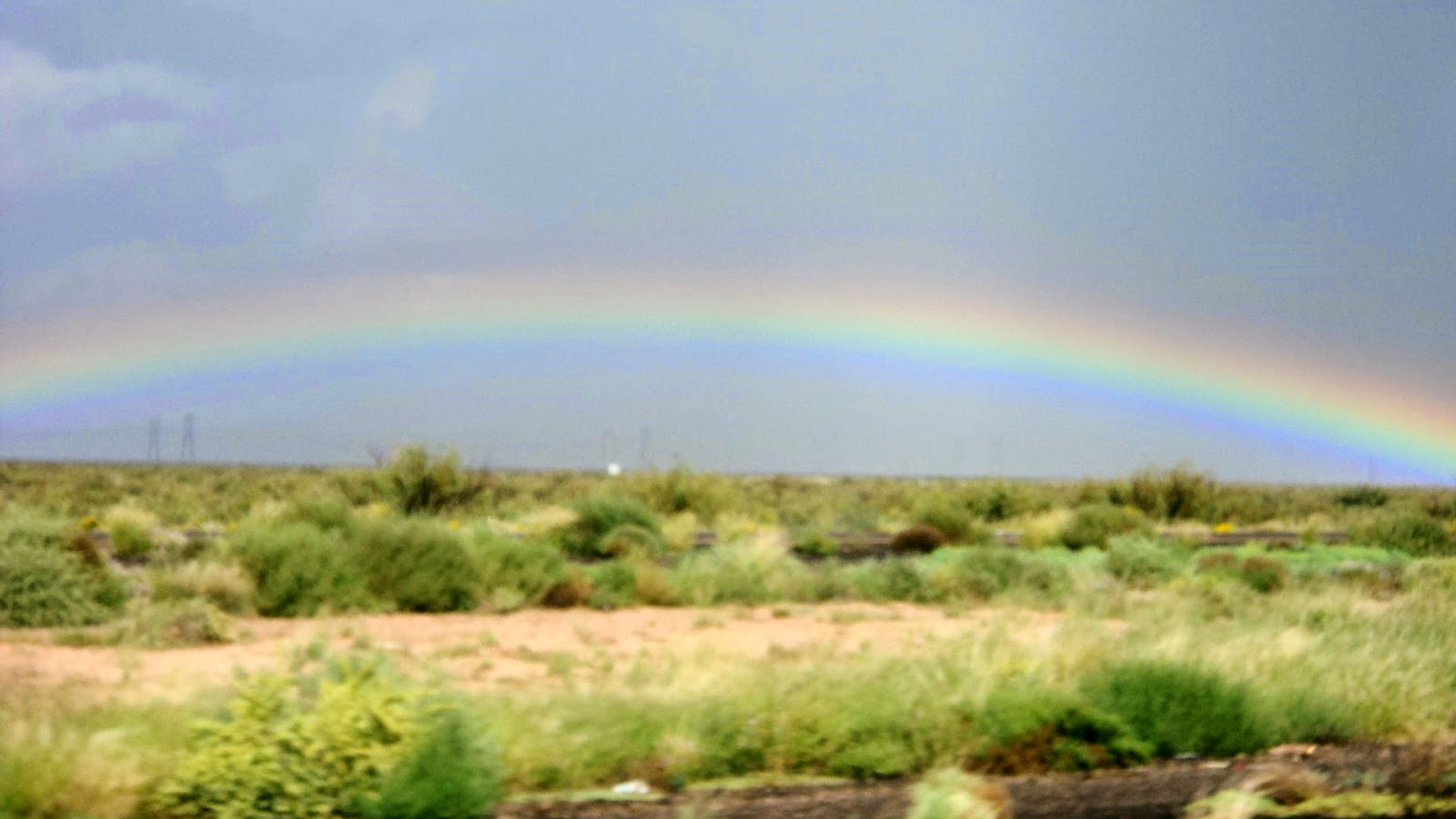 When we approached Las Cruces, New Mexico there was a huge road runner bird sculpture on the
hill side. 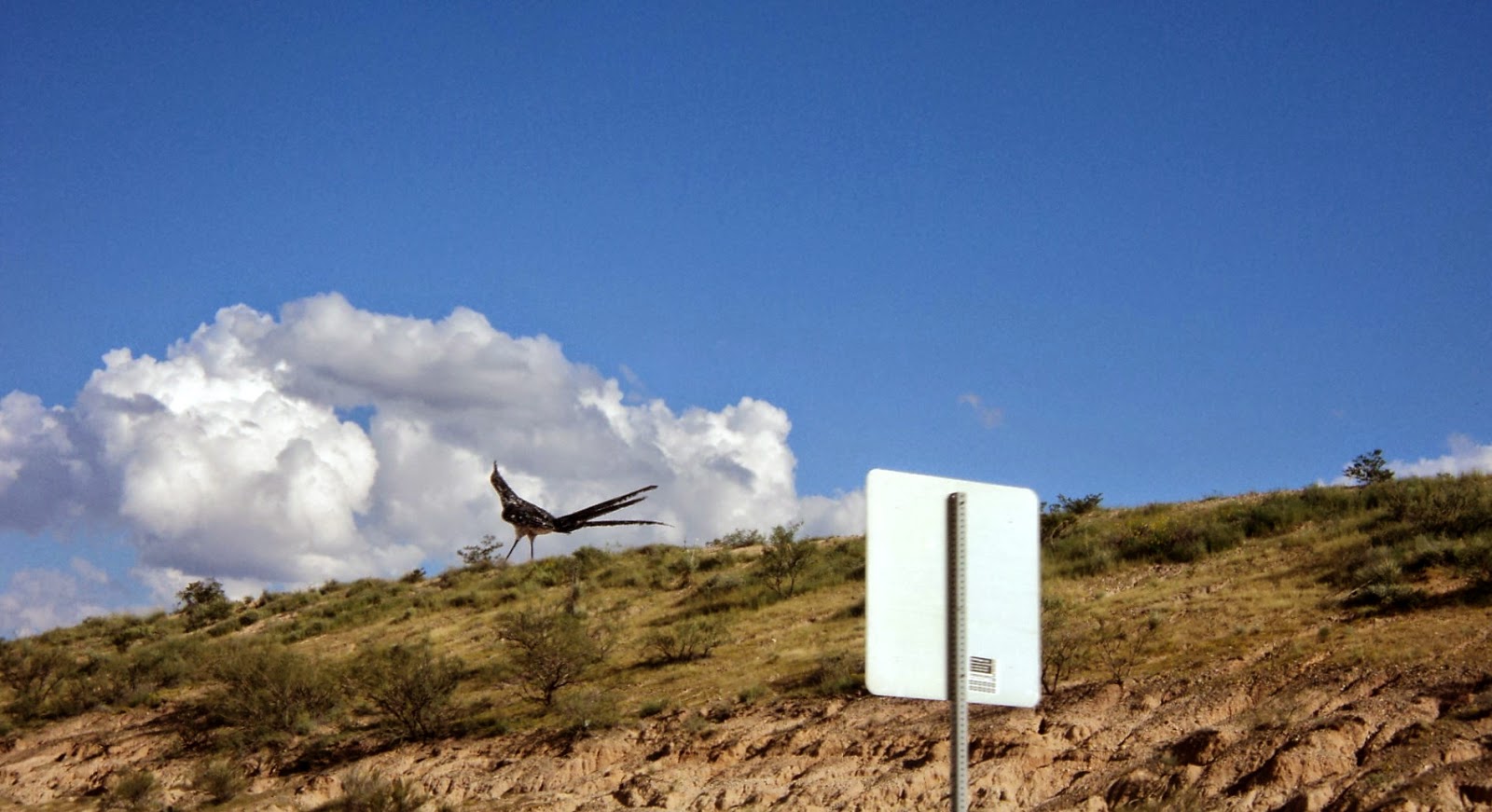 there is the city ahead. 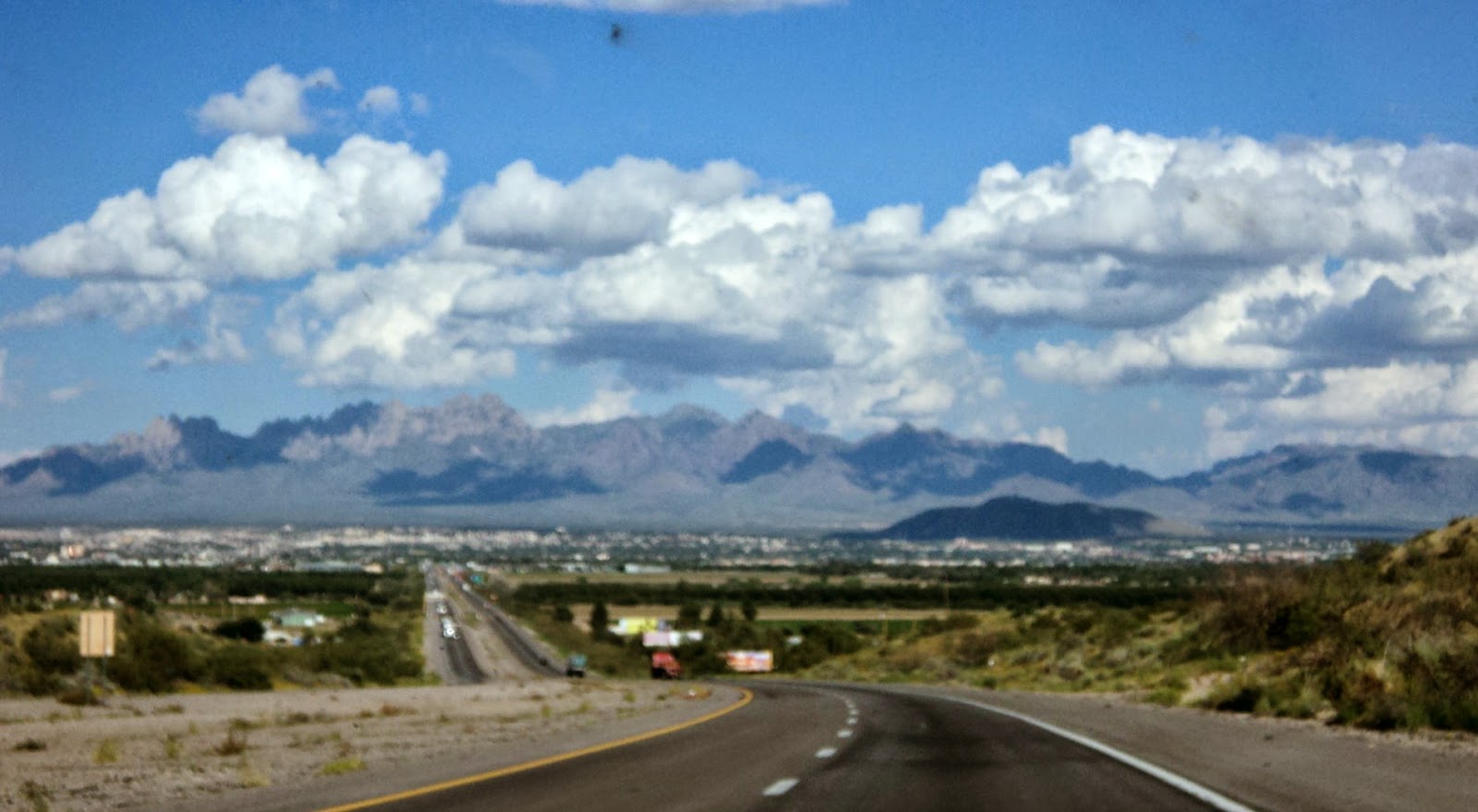 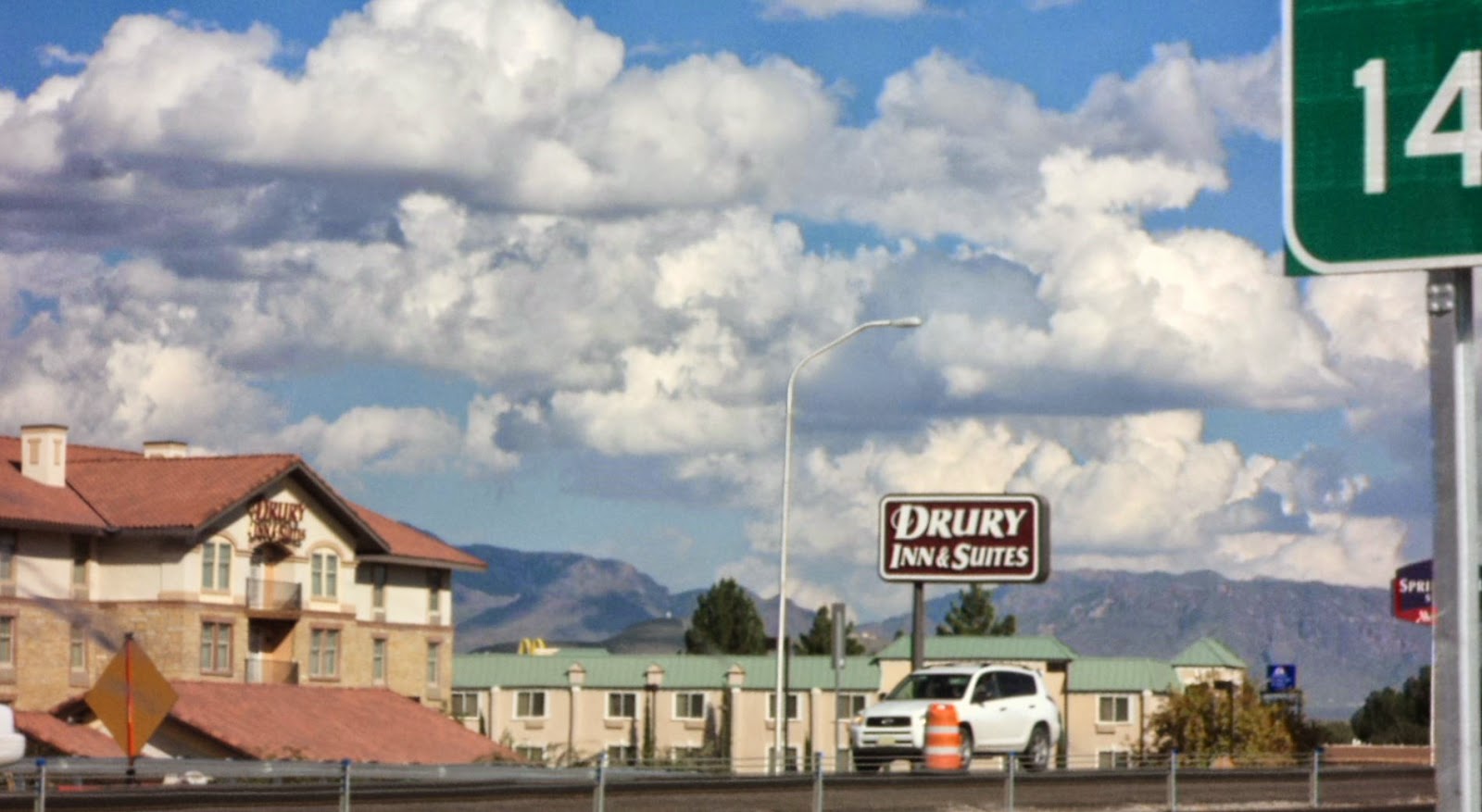 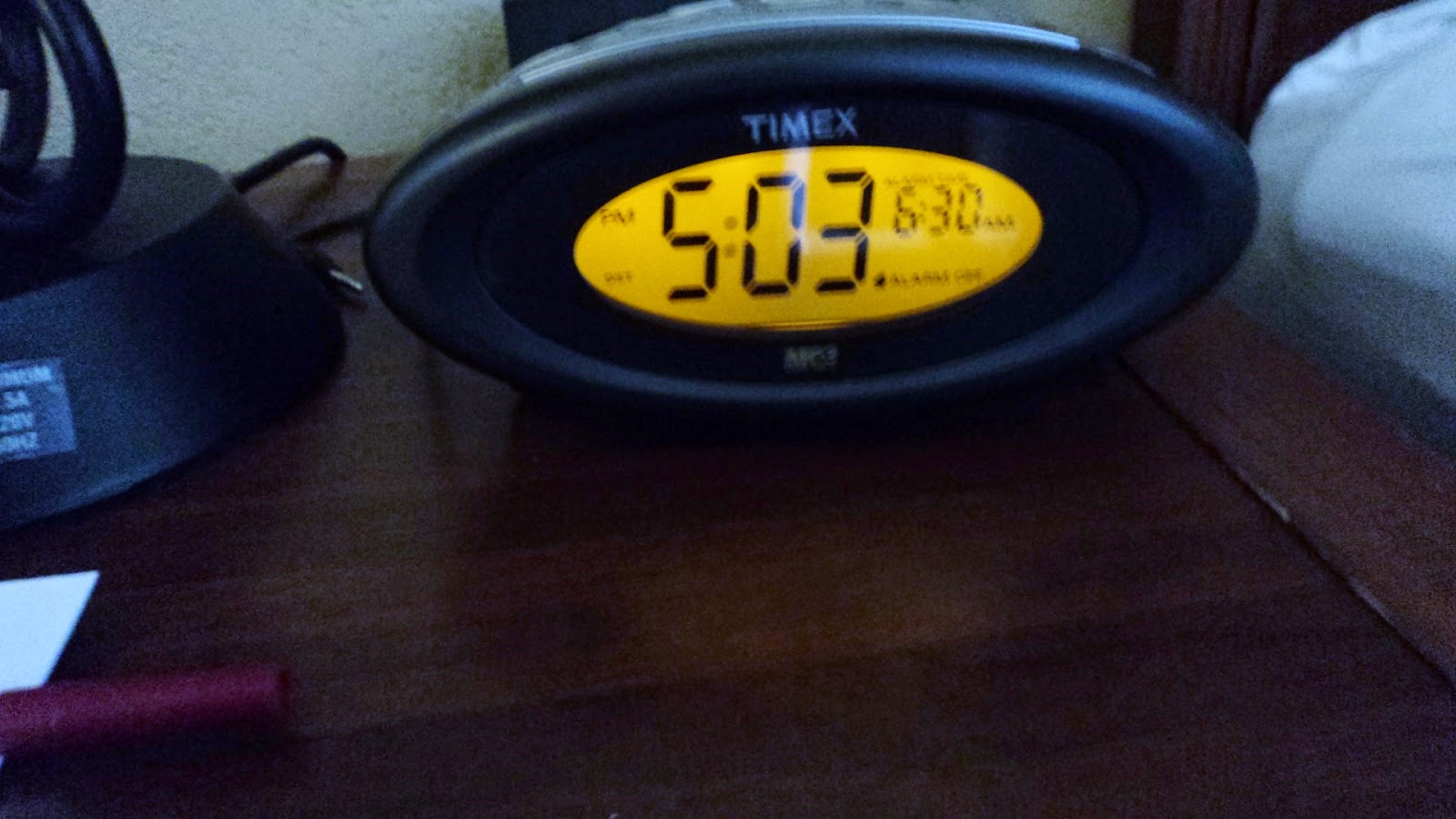 and it is hard to believe that a week has gone by since doing laundry.  It's that time again. 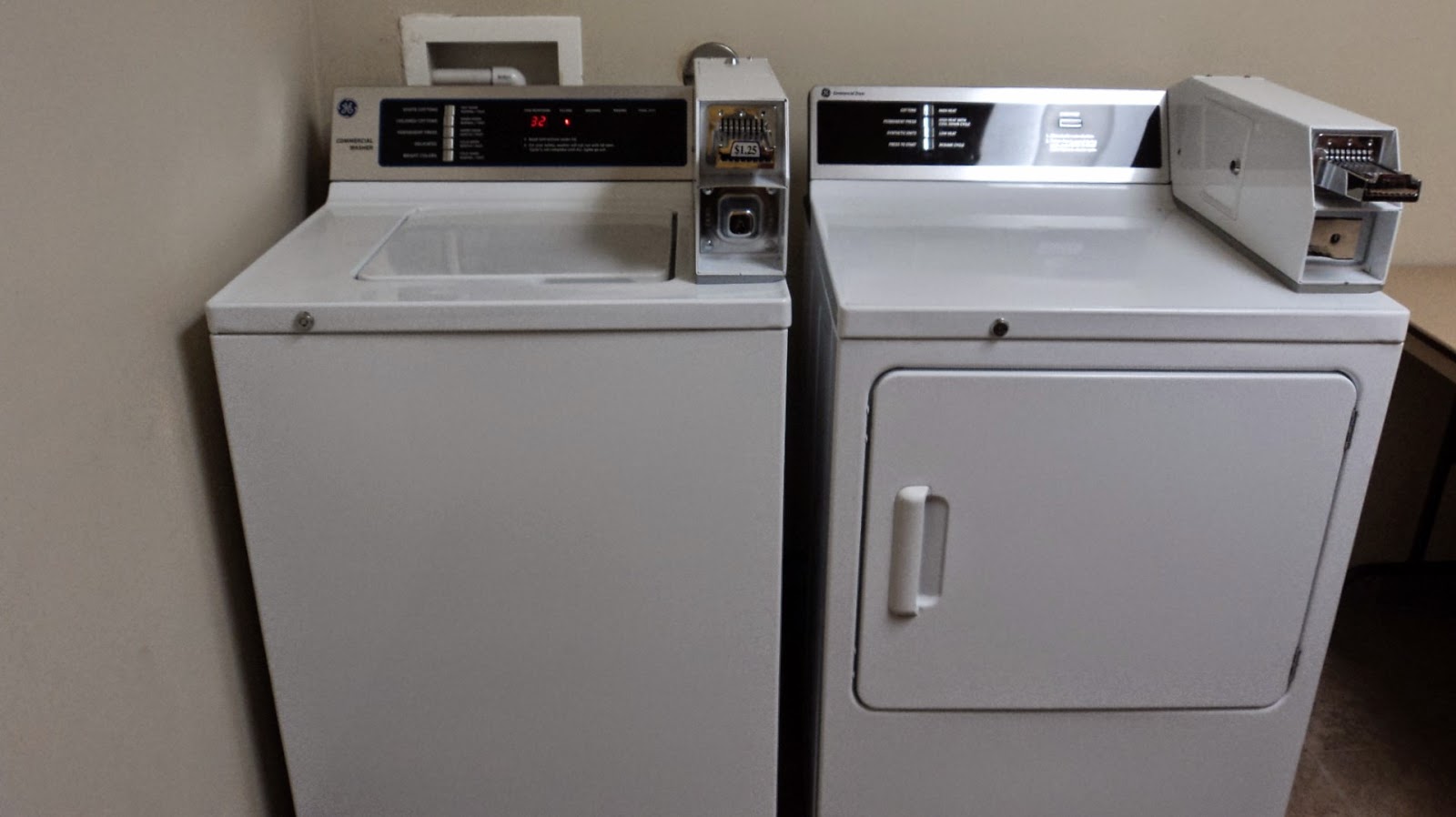 The prices were not as bad as some places, but I wished I had supplied my own detergent.
Somebody looks really tired now.  He is such a trooper doing all of this driving and then helping with the laundry.  Thank you, Christo....:-). 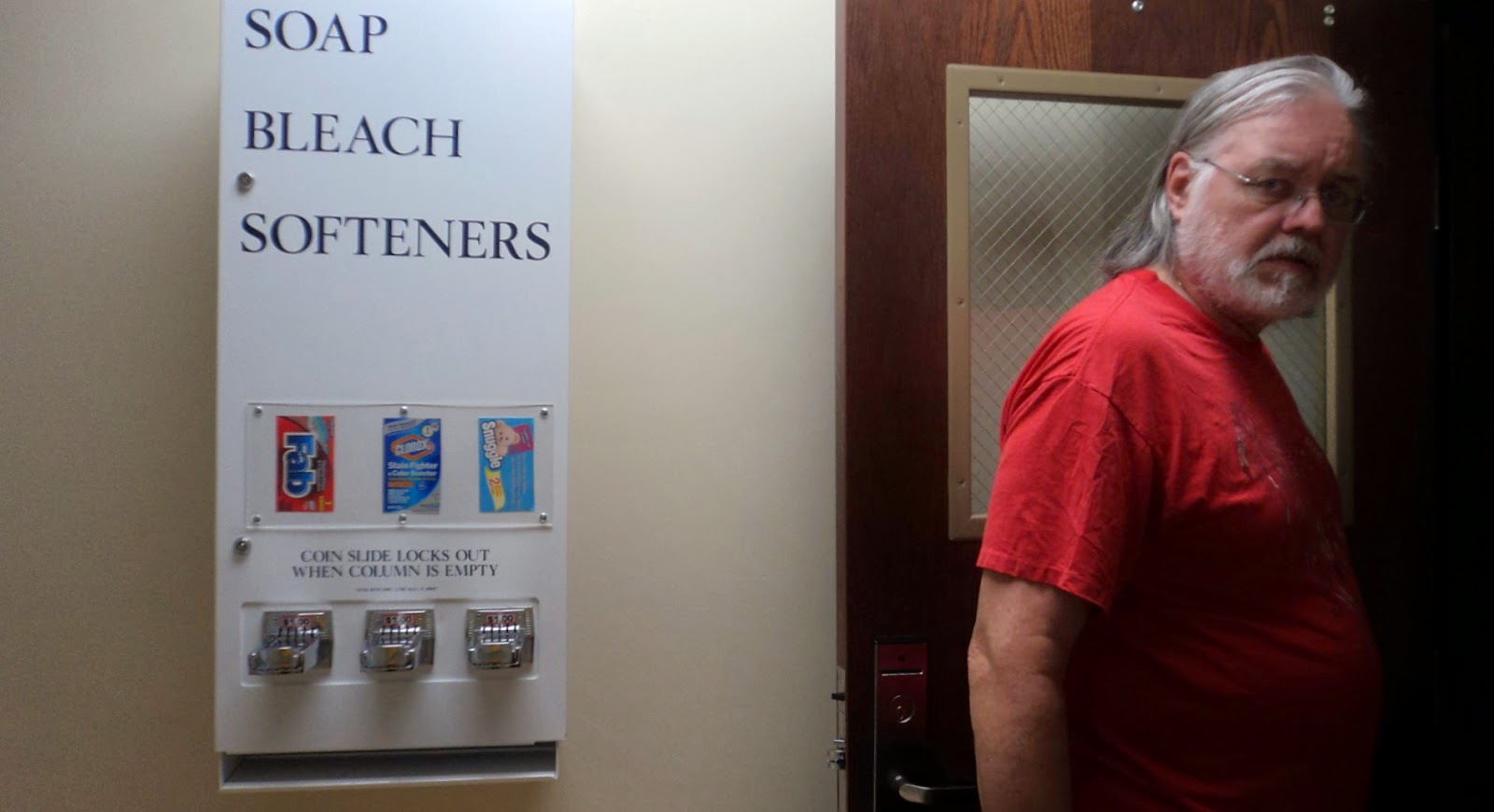 This hotel offers a free meal from 5:00-7:00pm to all of its guest.  The food is not the greatest, but we have never stayed anywhere else where this is done.  I was grateful that we did not have to go out for dinner or make another stop along the way to eat. 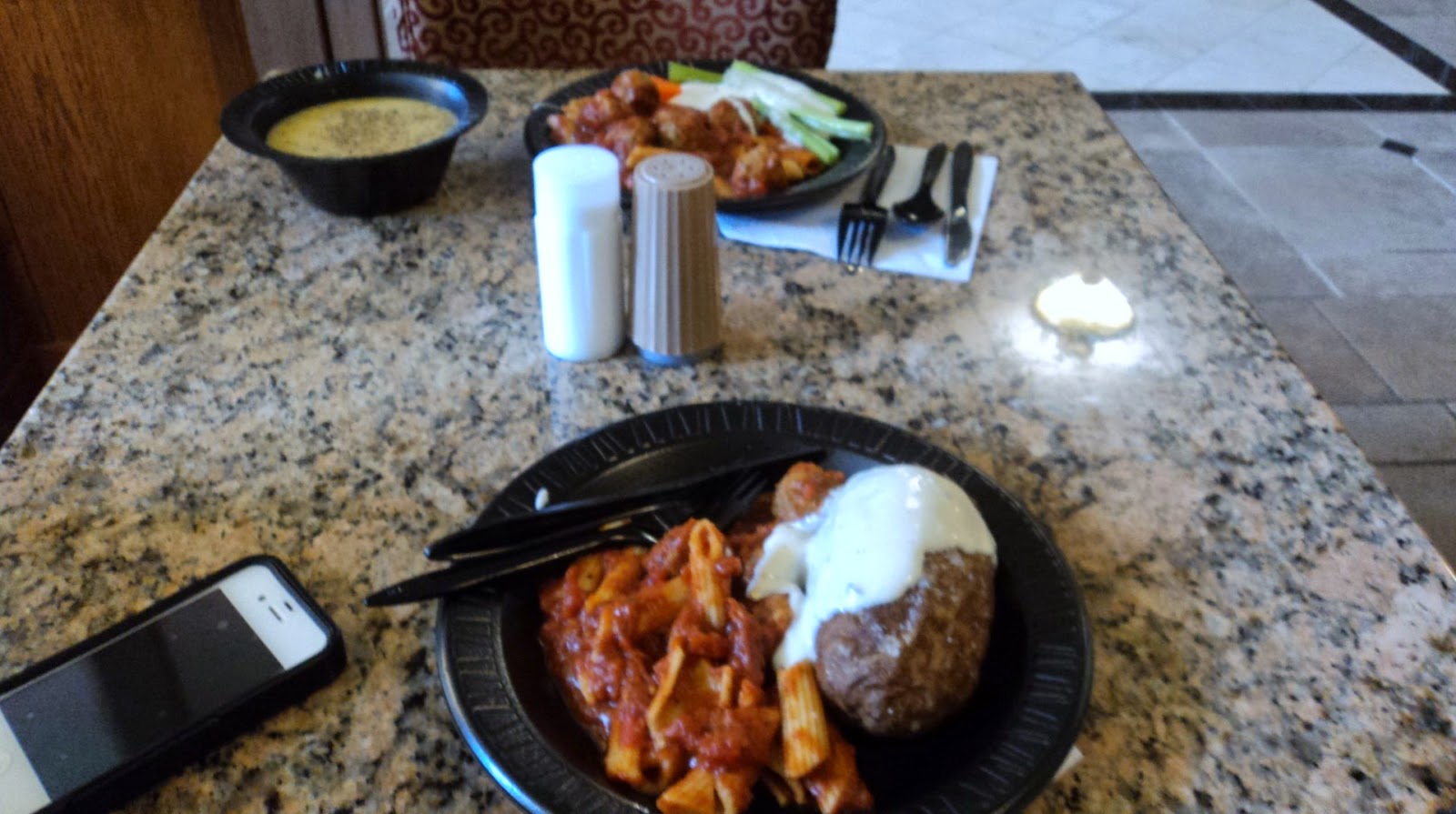 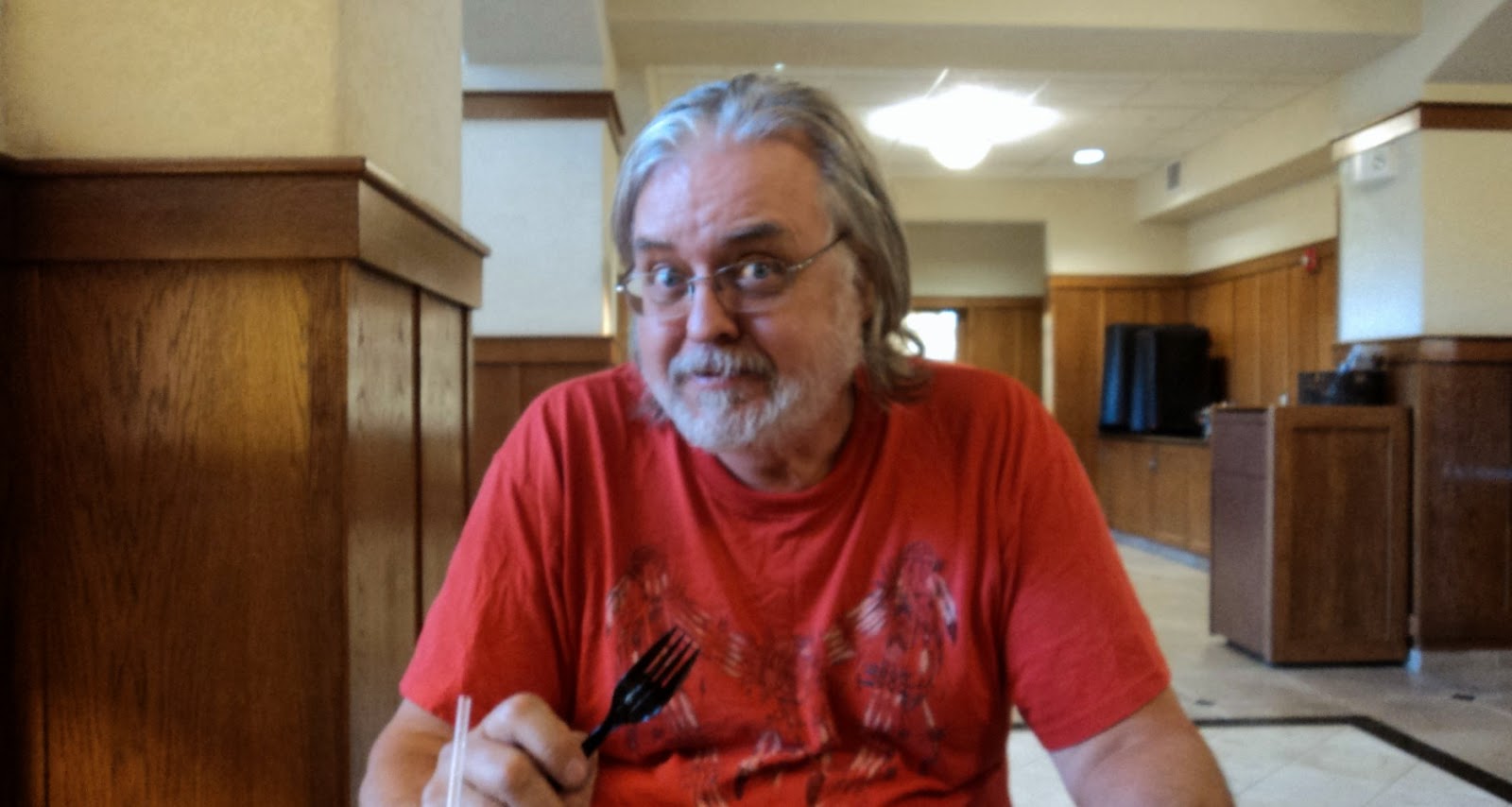 There is a beautiful patio area outside of the dinning area where I decided to go sit after dinner. 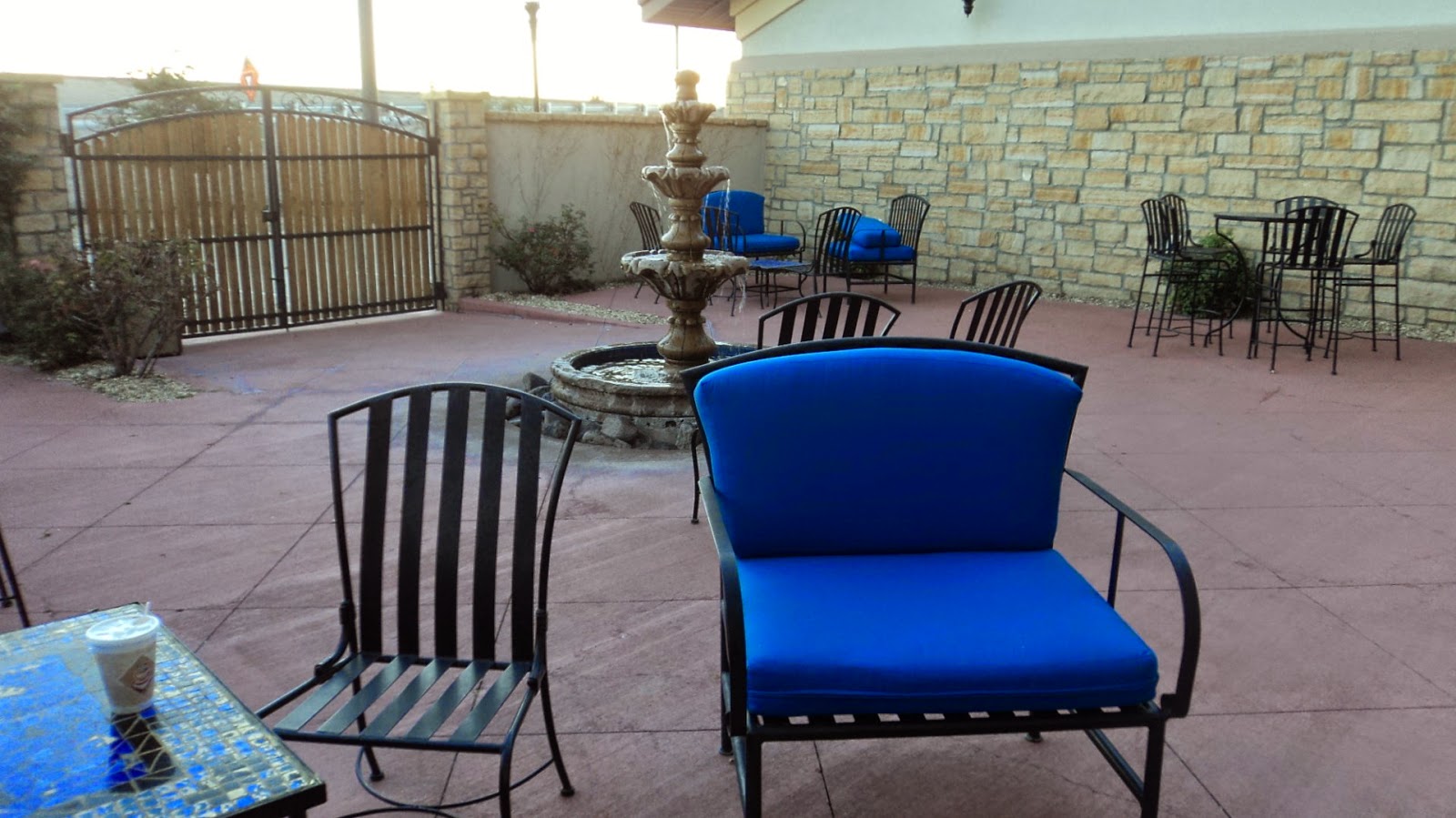 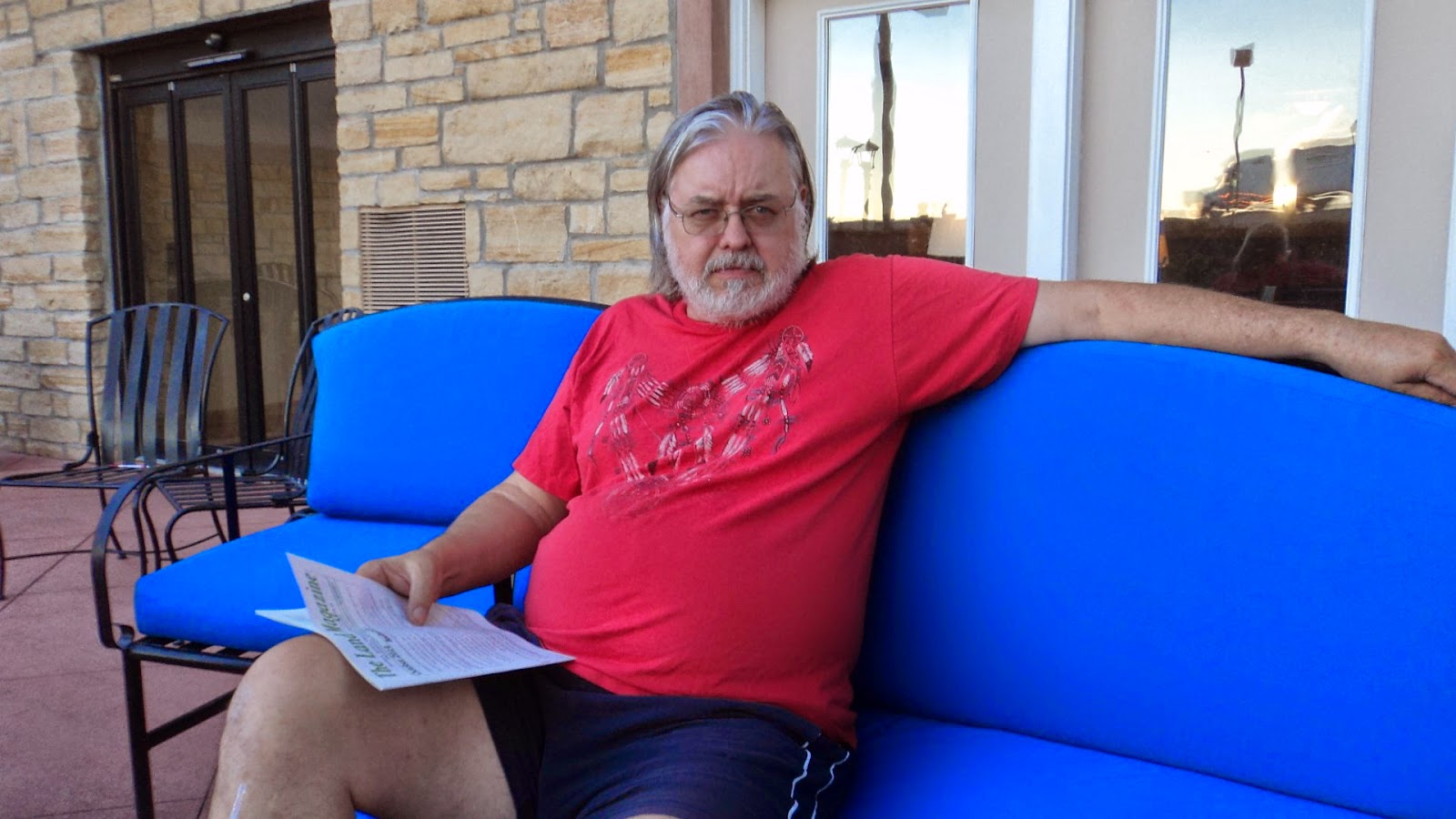 Well, the mosquitos were taking bits and pieces of me away, so I had to retreat to the room and lather down in tea tree oil to stop the burning that they caused me.   After administering "first aid" to myself, I peered out of the window and caught this beautiful sunset. 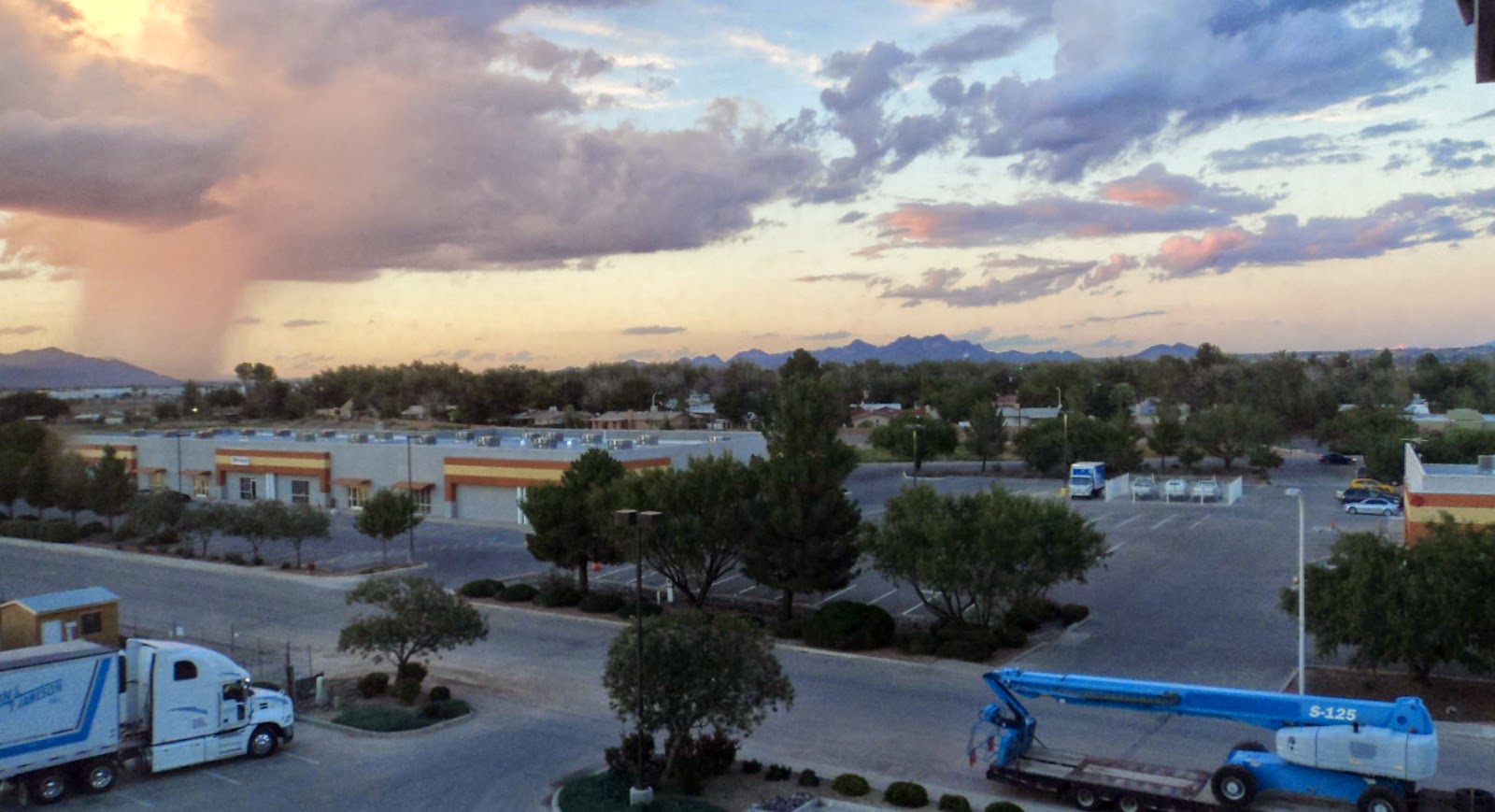