Slowing down to Catch Up!

Well, it has been several days since my last post.  The reason is we have had to make an unexpected drive back to Oklahoma after taking 6 days to get to San Francisco due to a death in the family of a very dear friend.

The good thing is before we got the message that this wonderful lady had passed away, I was able to have a long overdue 2 day reunion with my brother who lives in California.  My brother is 11 (or 12) years older than me and left for the Air force when I was very young; perhaps 5 or 6.  I never saw him again until the death of our father in 1976.  I was 17 and he was close to 30.

I didn't recognize him and never had the opportunity to speak to him as he left so suddenly afterward.  So, to be able to reconnect with him after 43 years of a gap was like being in a movie....:-).  We had it set to meet the day before the Super Bowl for lunch.  This is our first look at each other after so many years.....:-).  And the beautiful lady beside him is his wife Susan....:-).  Scootard had the task of capturing as many pictures as he could....:-) 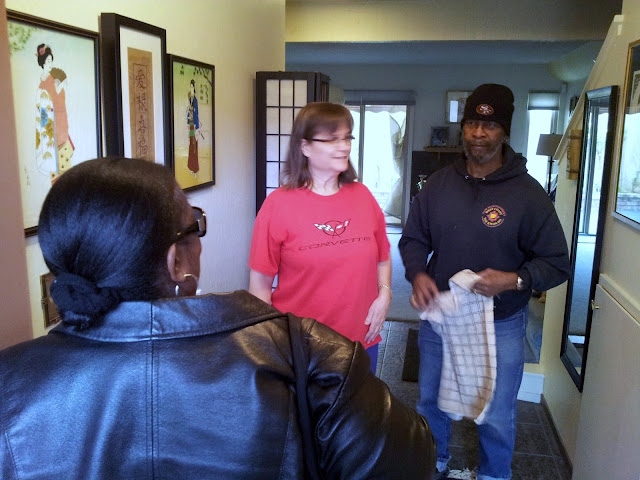 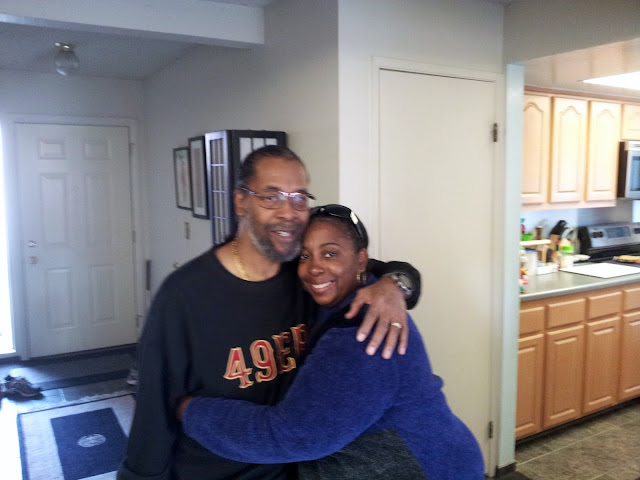 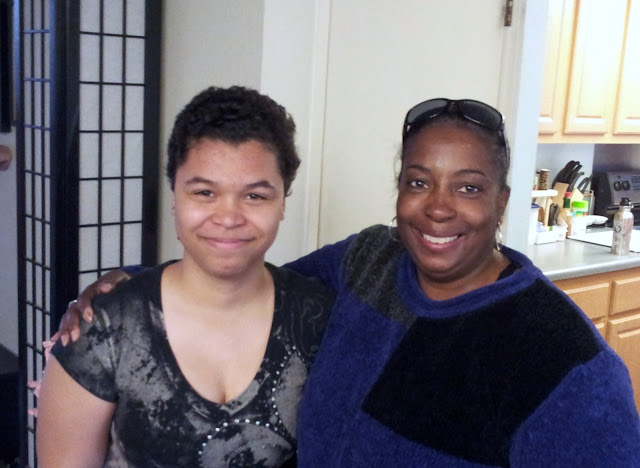 After a few moments of....well, taking in the moments...ha...we headed for lunch. 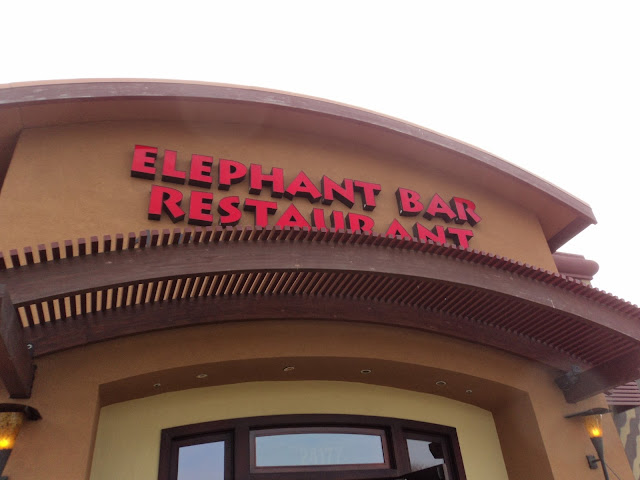 Scootard and I had never been to this place, but it didn't take long before we connected the name with the place! 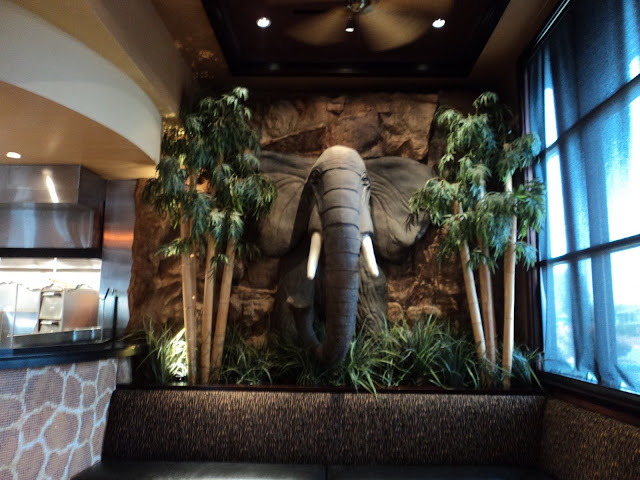 I mean how often is a person greeted by safari creatures when they go out to eat?  Cool-eh? 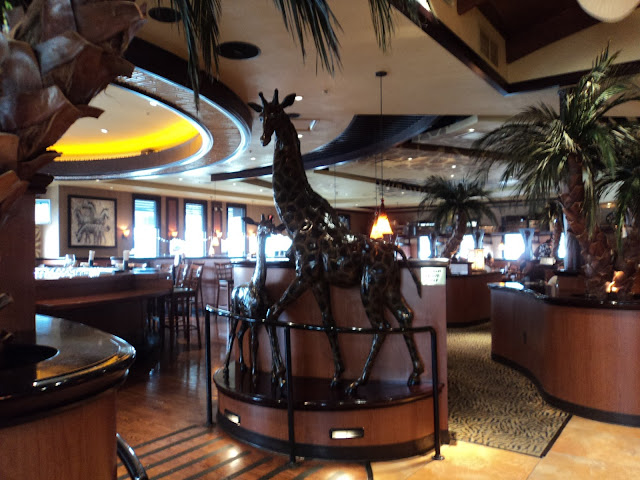 We ordered our food and then made plans to meet again the next day and watch the super bowl together. 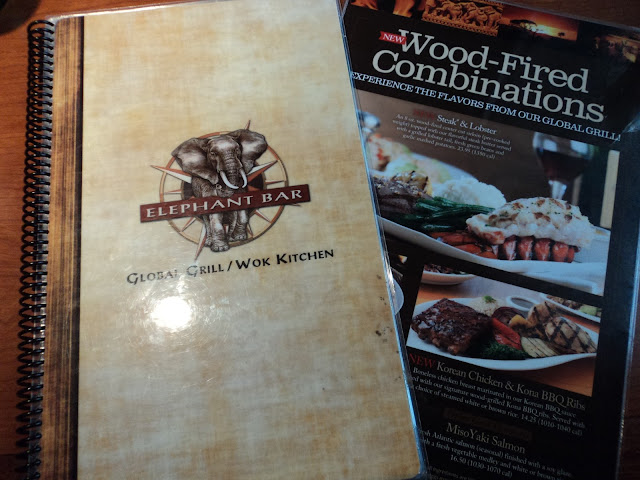 Needless to say that I didn't sleep that well that night with everything whirling around in my head.  The morning came quickly, but for some reason it seems we got a late start.

Since I was too excited to really think of anything else, Scootard and I decided to make our way to the second largest flea market in the US which is located in San Jose, California to pass some time before the big reunion. 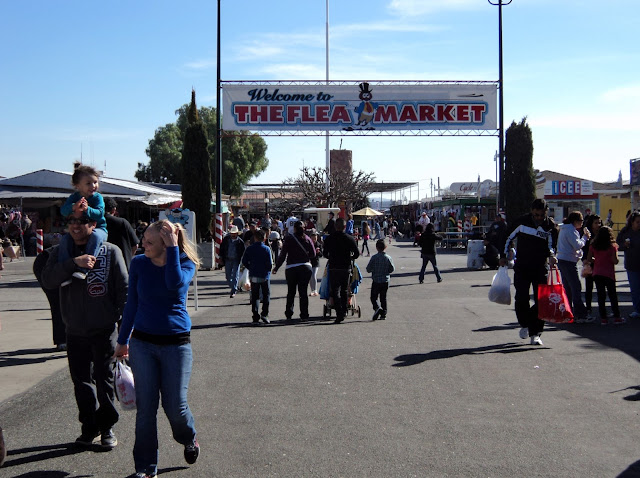 We thought tennis shoes were probably our best bet if we were going to make a whirlwind trip around the market before the reunion.... 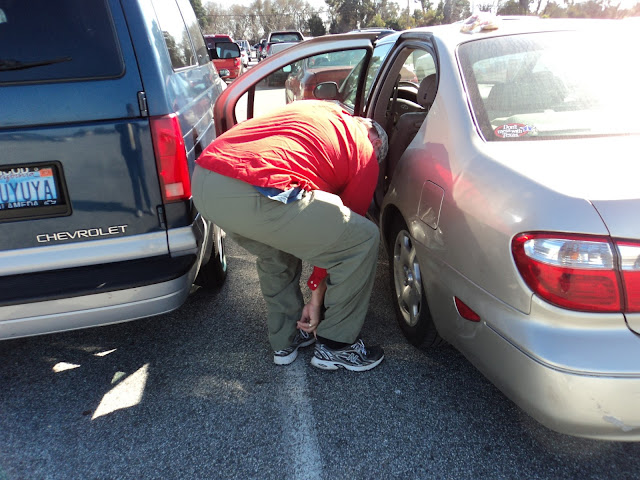 And as flea markets go, there was something for everyone..... 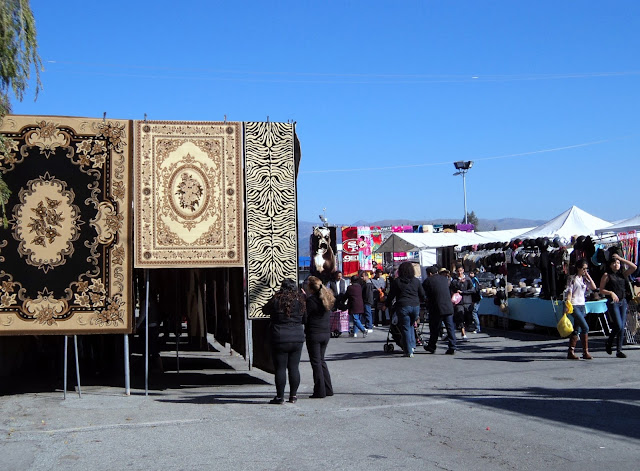 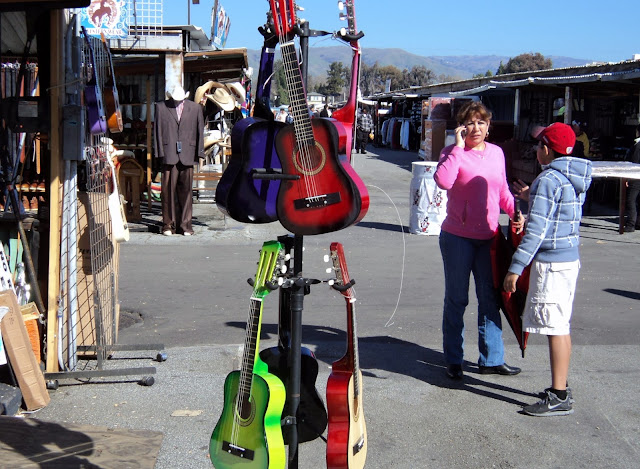 I'm not sure of what these were.  Everything there had a Hispanic "flare" to it.  Pinatas maybe?? 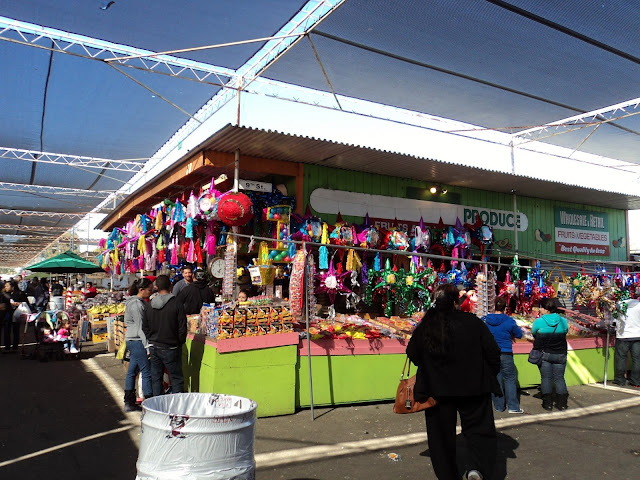 And there were these stove like thingees that could have made a cool outdoor grill depending on what you wanted to cook. 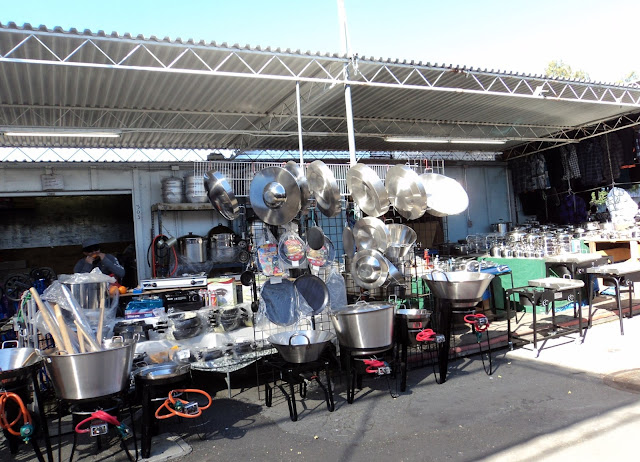 The plan was to meet at my brother's house and then go over to some friends to watch the game.  We didn't have much to eat that morning and decided that we had better grab a little something before heading over there..... 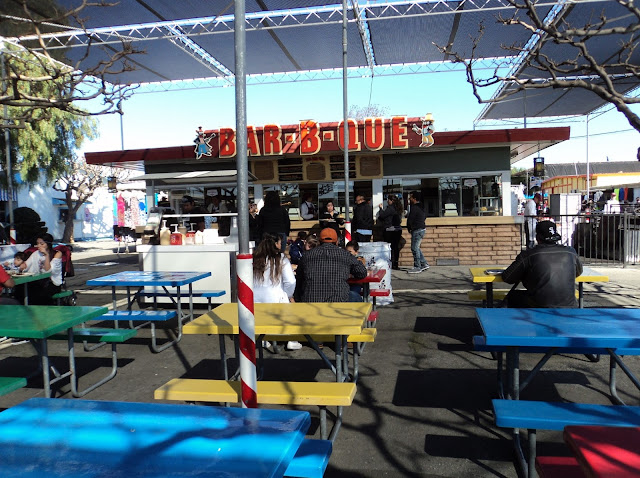 on the way out, we saw that they even had a rock climbing wall set up!  Who does that at a flea market?? haha  Wow! 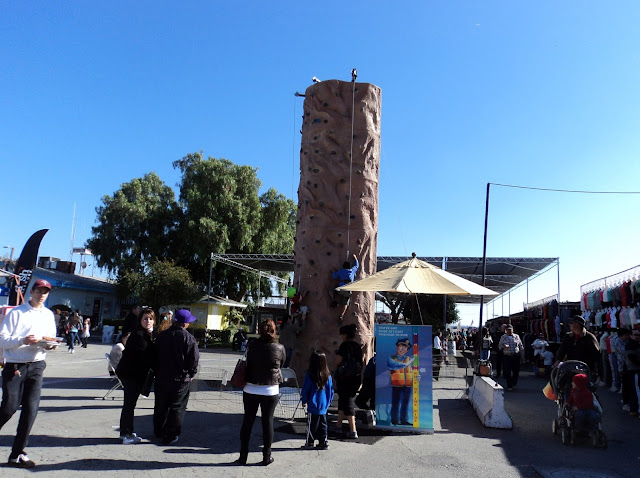 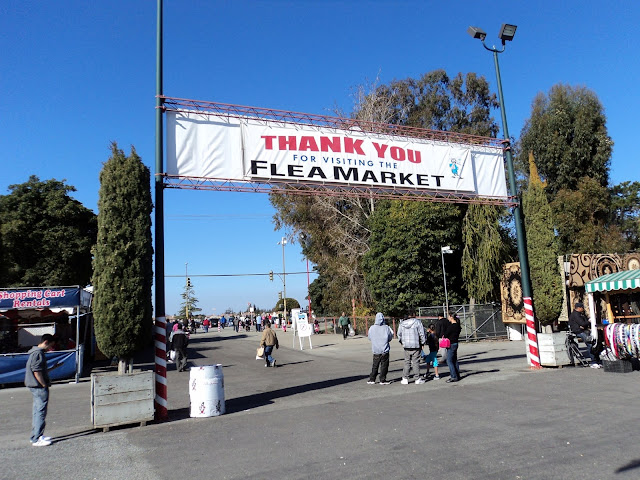 One of the things that I learned about my brother was that he is a professional race car driver.....:-).  And he even let me sit in his "baby" who was parked  and covered. 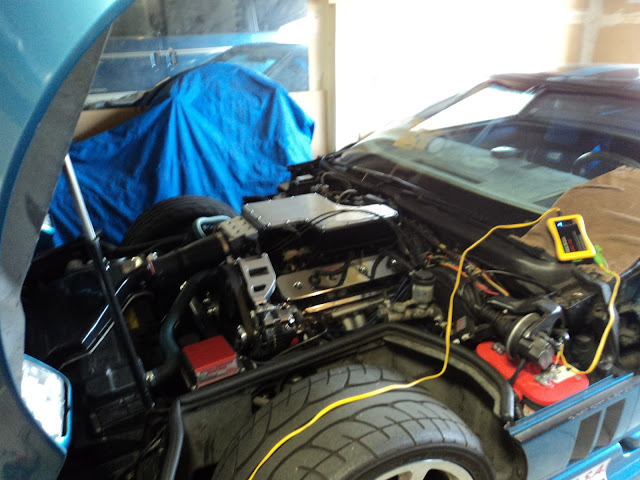 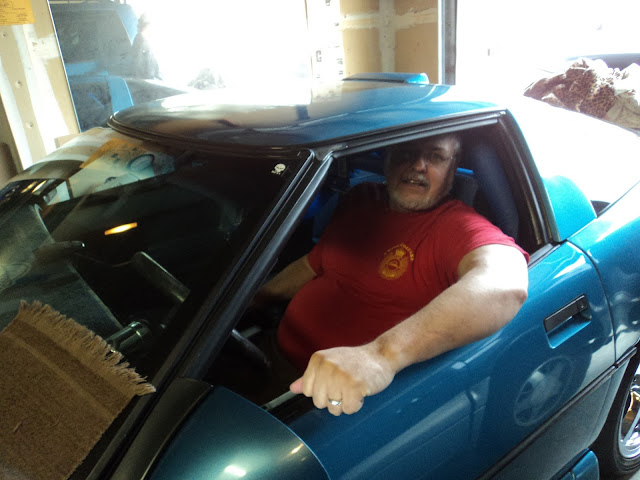 It was a tight fit for me, but not because I'm tall!  haha 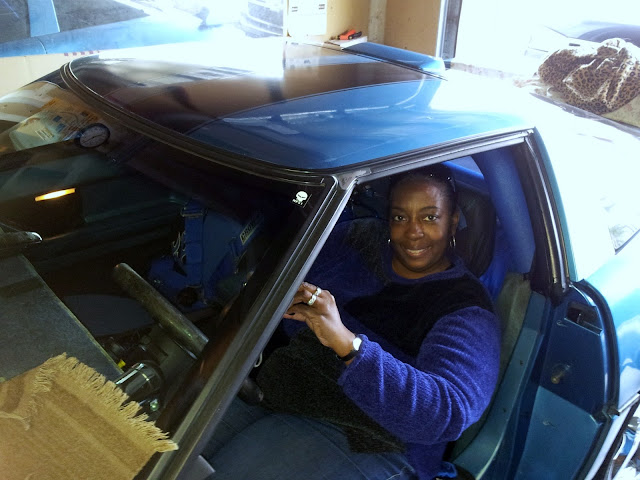 I saw all of these stickers under the hood and remembered that "Ms Vickey" (my scooter), still didn't have a sticker to cover her "sore" from the tie down straps rubbing against her paint job....... 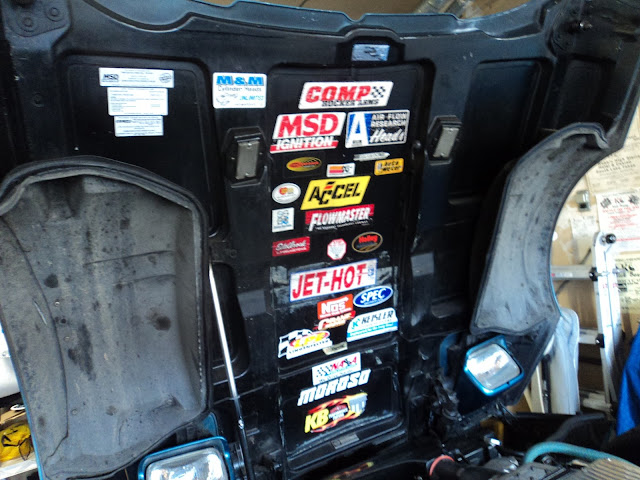 It was Sunday and time to head over to a friend's house to watch the game... 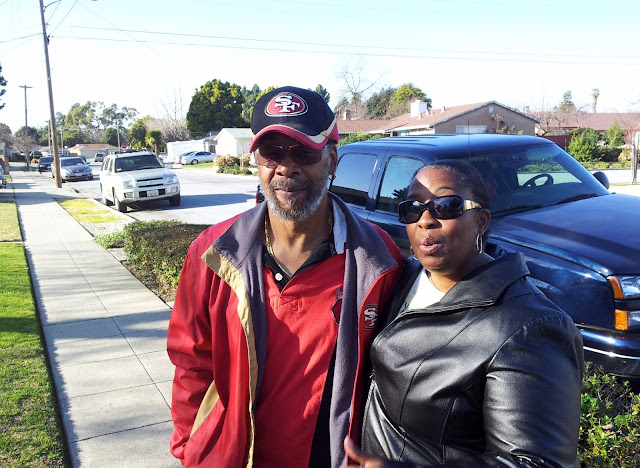 There was a lot of food being prepared in the kitchen and we didn't want to be in the way.  Scootard and I decided to give ourselves a sort of tour of our new friends backyard.  She was growing a Meyer Lemon tree.  At first glance they look just like oranges....... 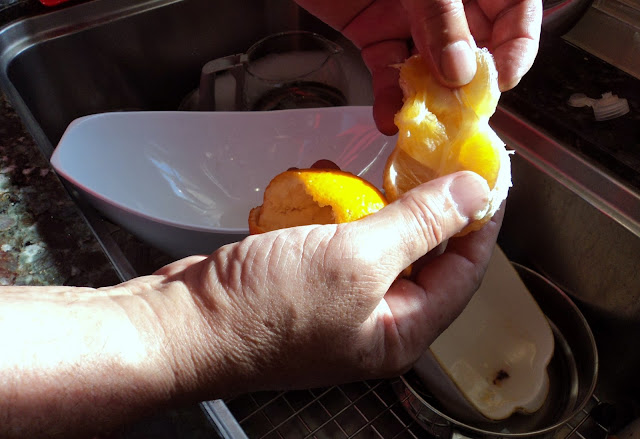 This is what happens when you bite one!  hahaha......I DID NOT follow suit........for obviously reasons. 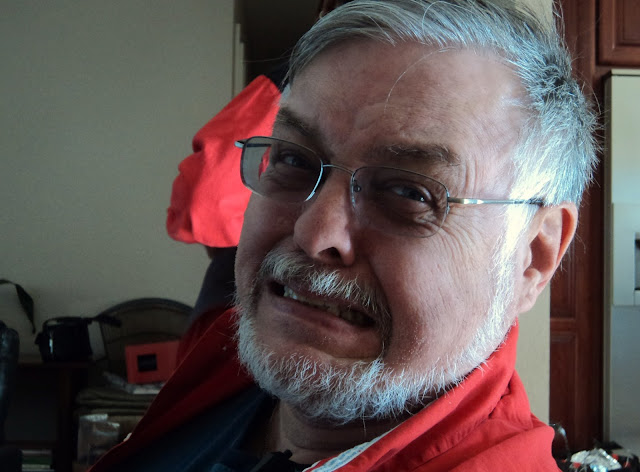 Scootard decided that the next thing he would eat should be a cupcake instead! haha.  The cupcake had a football ring sitting on it which Scootard took the opportunity to use as a proposal of marriage to me again......ahhhhhh...:-).  Well, I figured since we were already "hitched", I might as well say yes...again. 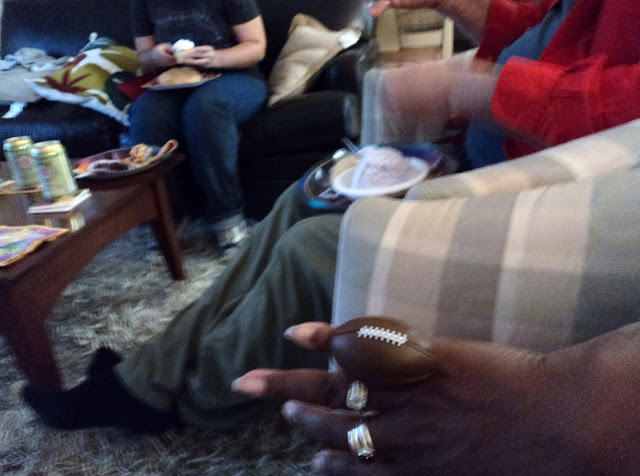 I am not a sports person, but enjoy watching other people get their knickers in a twist over their respective teams.  My brother and his friends are 49ers fans.  Needless to say, it was quite "intense" in the room....haha.  I kept telling them to root for whoever was winning.  That way, you can't lose! 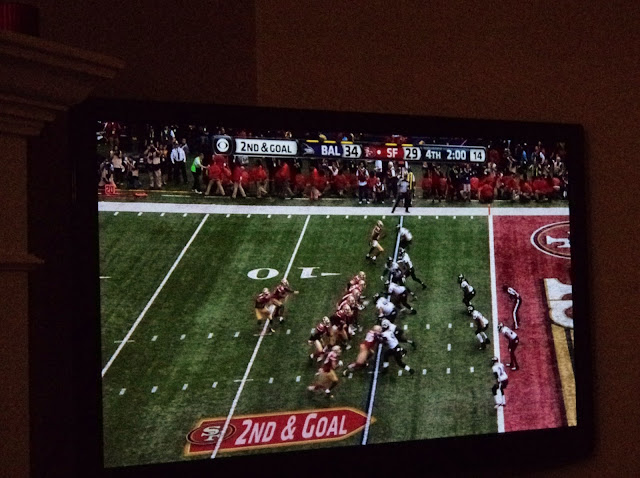 It was a good day and I am glad we had that weekend to spend with my family.  Because the very next day at noon, we were unexpectedly on the road headed back to Oklahoma. We hope to see them once again on our way back to Canada when we leave.
Posted by Tripping Sister! at 5:55 PM 8 comments: