For the past two weeks, we have been working away in our "garden" trying to make it my own oasis away from Canada.  It has been an experience to say the least.  We actually had to give the local home improvement stores the low down on "zones" after having to relocate just about everything we put on the North side of the yard....:-(.  Strange thing is the north side should have been the cooler side, but since the south side is the side with mature pecan trees, it is actually cooler and shaded over there.  Nevertheless, there are some that are doing very well inspite of the ones that have just about given up the ghost to the heat.

I had it in my mind after having read some ideas on Pinterest to repurpose an old vanity that had been sitting in my storage room for years.  So, I did this....The only thing is the patch behind it is so large that it over shadows the beauty of it.....:-(.  Anyway, once the petunas start to fill in, they will hang over and give a lovely display.....:-) 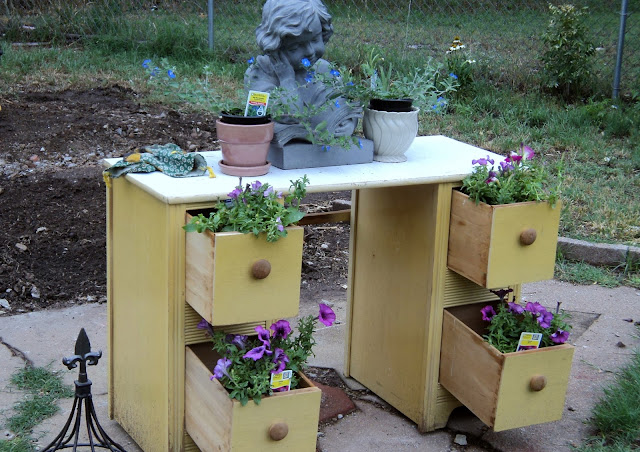 We purchased 5 "knock Out Rose" bushes.  All of which are struggling with the exception of this one that is not doing too badly.  We had to move all of them and put some landscaping fabric on the trellis to help block the sun and keep it from burning..... 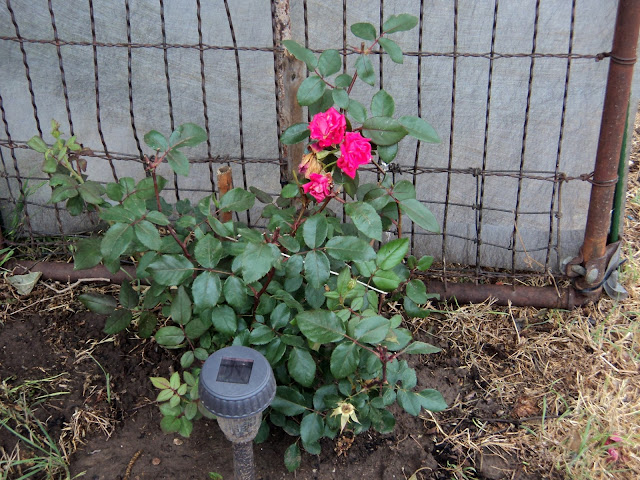 The rest of them developed "black spot" which is a disease that roses can get from humidity and mold in the soil.  This one is on its last leg......sadly. 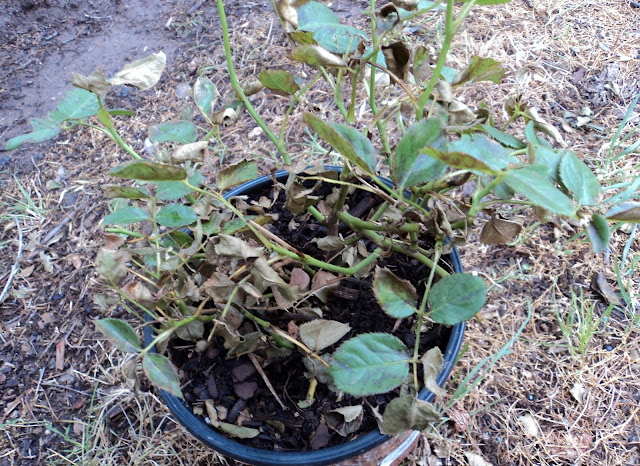 We added some wooden garden trellis that we planted some Montana Clematis.  Chris put a large stick in the back to brace it as we have read that the sheer weight of it can push the trellis over or pull it down if it is not braced somehow.  This variety will grow 20-30 feet and we hope it will give a good show once it is established.  Right now, it is young and is only about 1 1/2 foot tall. 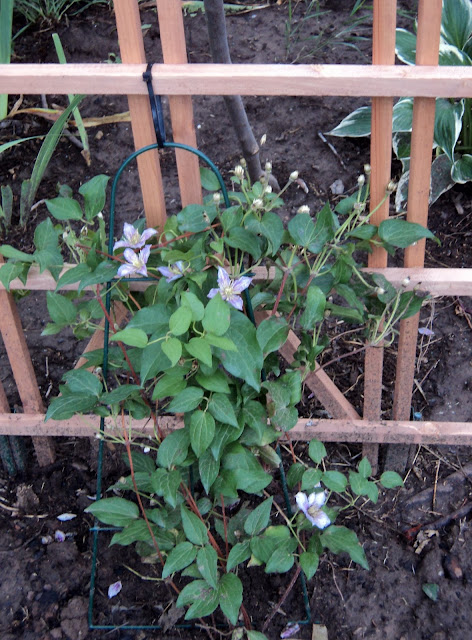 My daughter gave me this for Mother's Day, but I just got it yesterday.  She knows how hard I have been working in my little oasis and wanted to add something to it.  I sat it in the place where I had to relocate some Shasta Daisies......:-). 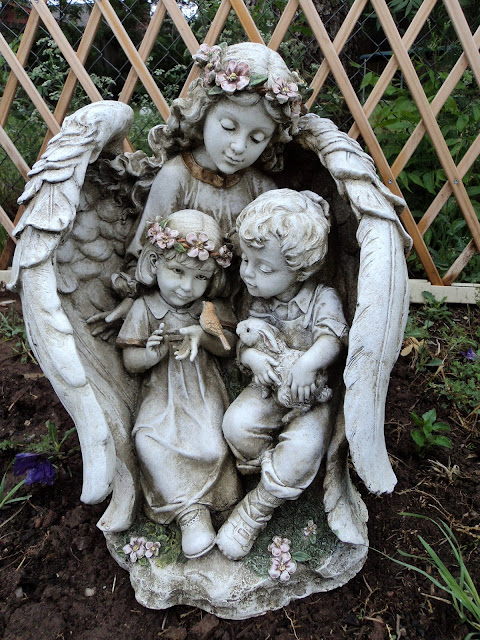 Meanwhile, Chris was pounding aways with this machine that made the whole earth shake!  What a racket!  That thing was so loud that one would have thought there was some demolition going on nearby.  The purpose of the machine is to help level out the ground where that monstrosity of a grill used to sit.  Unfortunately, when we had it taken out, it left a huge gash in the ground.  The workers tried to backfill it with old rocks from the grill which Chris removed most of and used the machine to pound the ground. 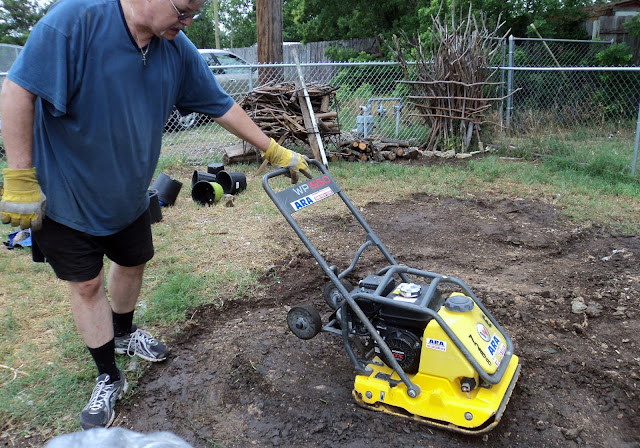 For that huge patch of ground, we purchased some grass seed to help fill in that area.  I'm sure that after the grass fills in, it won't be such an annoyance to me. 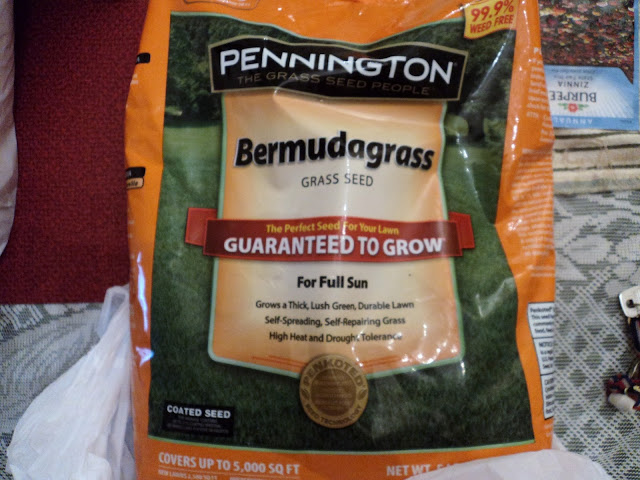 Since only one of us could use the machine at a time (thanks Chris!), I decided to take some more shots of what we have planted. We picked these up yesterday.  I cannot remember what they are called but when they wither the remind me of petunias.  I love this color blue! 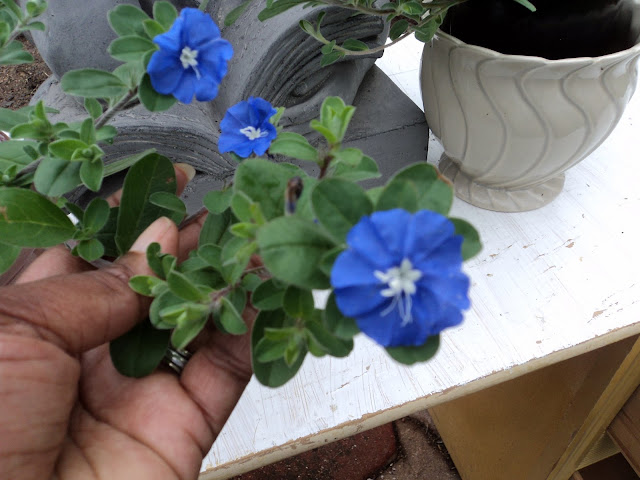 The Zinnia that we planted was struggling terribly in the heat, but seemed to be doing better.  So, I have not moved it as of yet. 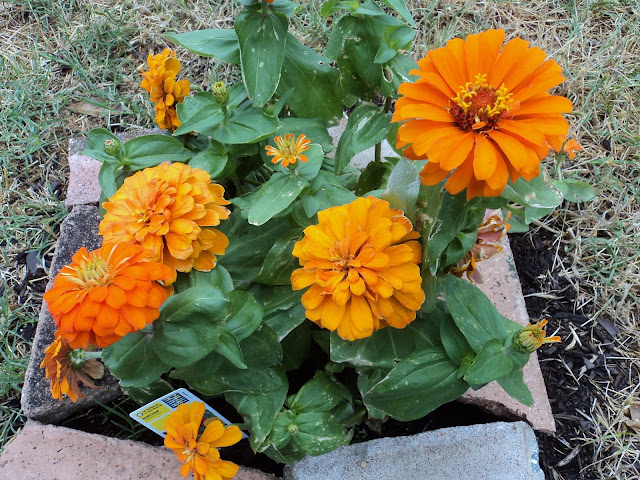 We purchased some cheapo chaise lounges that we could use the watch the sun set once we get the mosquitoes under control and the grass cut down a bit. 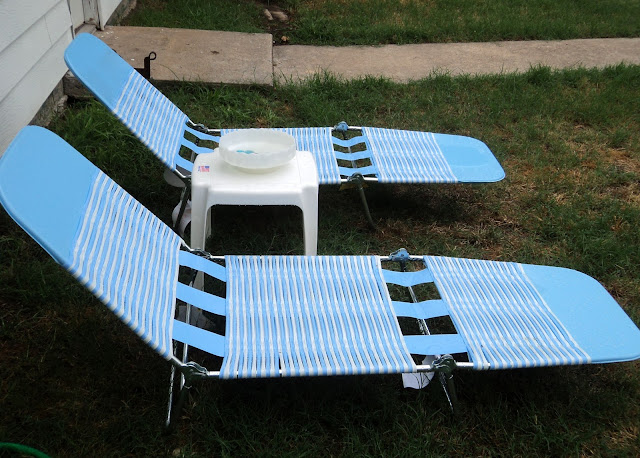 I was able to take my first cuttings from my Peony bushes from the side of the house.....:-).  For some reason, it smells just like a rose....:-)  Unfortunately, they are becoming over run with ants!  EEKKKK!!! 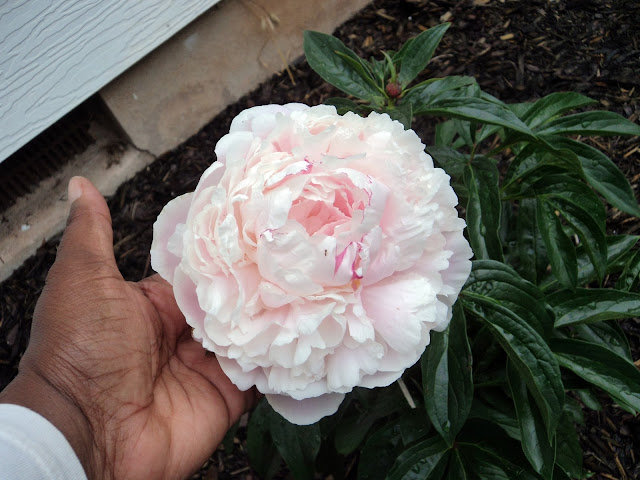 I bought some traps for the little guys.....I refuse to let my hard work get eaten up by ants! 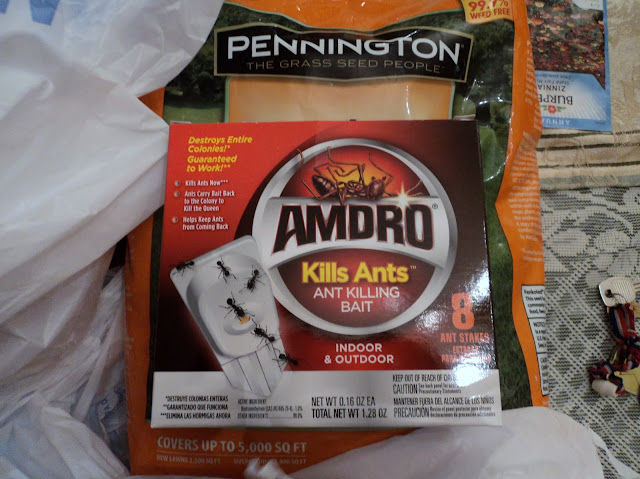 Chris was just about done...as done as he could be considering the ground was very muddy from rain the night before.  There was also some foundation left in the ground that no matter how hard he pounded, it wasn't going to move..... 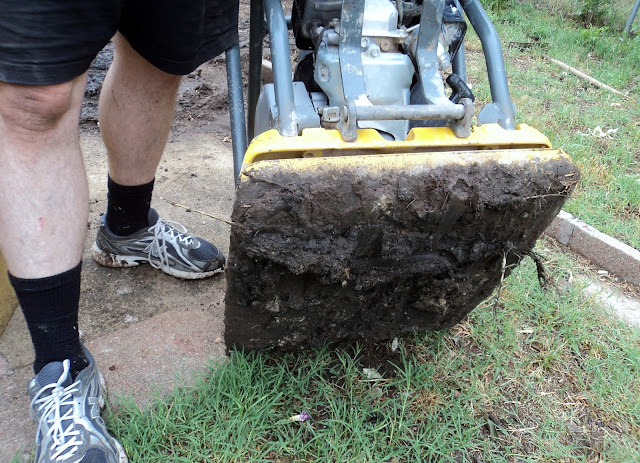 There had to be about 3 inches of mudd caked onto the bottom of the machine that had to be cleaned before we returned it to the store.....:-(.  nasty! 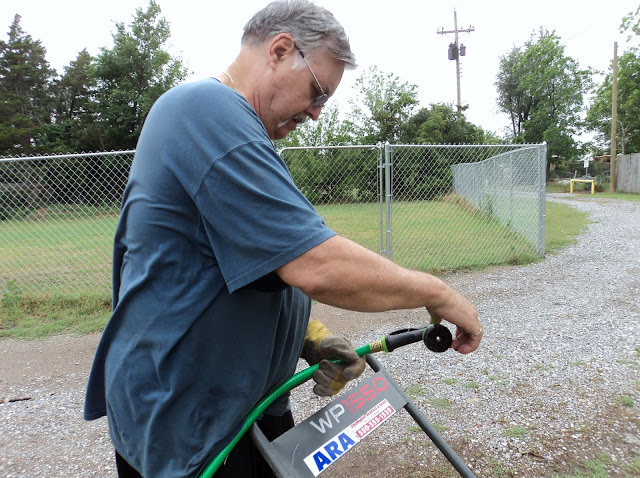 both of our shoes were mud laden once we got done with the wash. 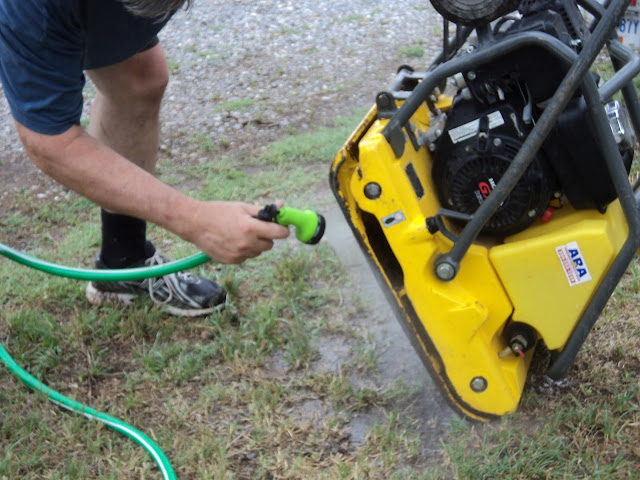 Loading the thing was no joke.  It weighed about 200 lbs..........HEAVY when it is all concentrated into a little 2x2 square space of metal! It took two guys to put it on the trailer at the store.  We had to do it ourselves to get it back there.  Sheesh!  Chris did most of the work as all I could do was help steer it on to the trailer. 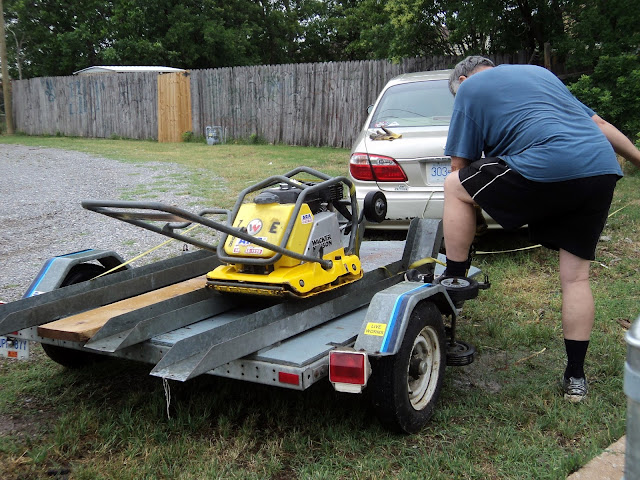 We returned the machine and stopped at the store to pick up more flowers seeds for the front.  Seems that we may have gotten a bad batch the first time around as they seem to be quite sparse in the front. 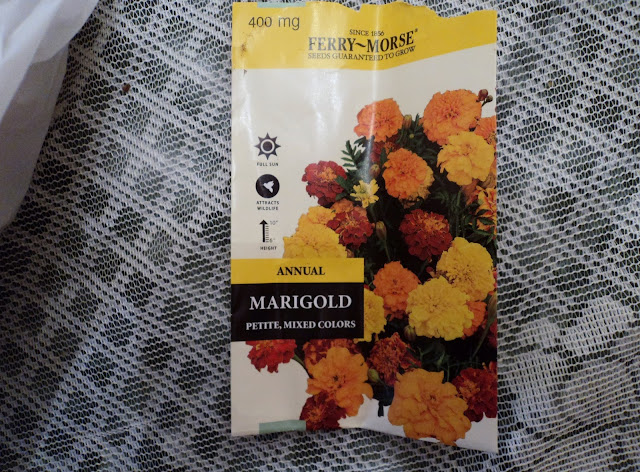 We relocated the Honeysuckled that we wanted to use for a fence cover as it was dying in the "full sun" instructions that came with it.  We replaced them with these that are for our zone which is 7 and is suppose to be very heat and drought tolerant, grows to be 4-5 feet high and 3-4 feet wide.  It might take some time, but hopefully it will do the job for us in regard to providing some privacy. 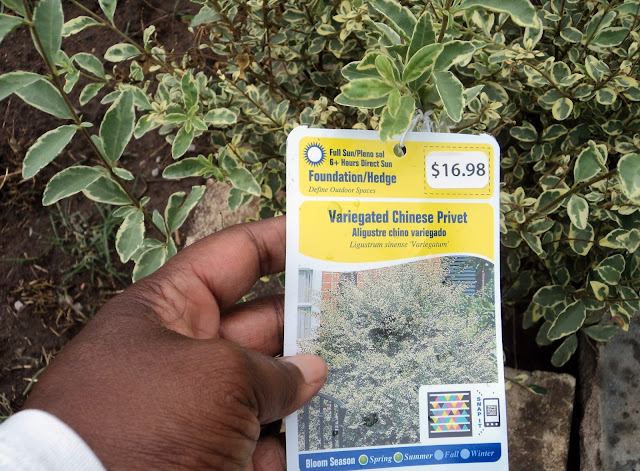 In the meantime, we put a little color on the fence in a couple of places to fill in the gaps. 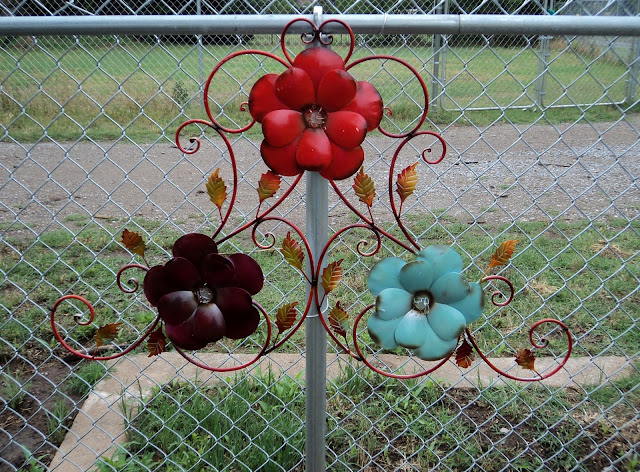 the last battle is to get rid of  the large weeds that did not surcomb to the weed and feed that we put down twice already. 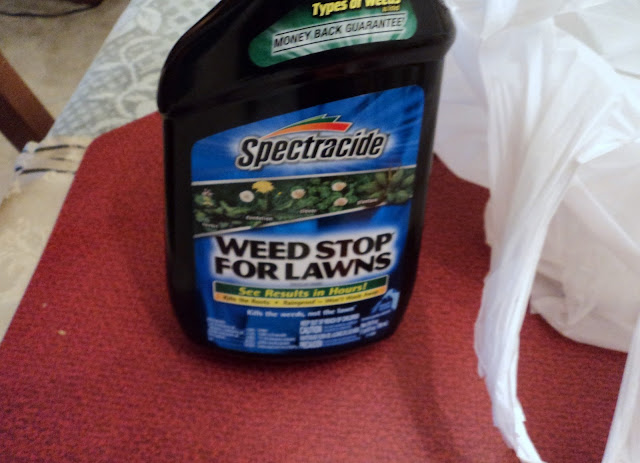 I have high hopes that since we still have a few months to be here, we will be able to really enjoy the fruit of our labor....:-)

chat with you again later!
Posted by Tripping Sister! at 1:55 PM 5 comments: