I really enjoy being in my home in Oklahoma. It seems that I am forever doing some kind of major work or repair to the house and never really staying around long enough to enjoy the expense of it all. So, the thought of returning to the great North Wet does not hold "warm fuzzies" for me.  This is me looking head to the next 4-5 months of mostly rain.  oh well.......:-(. 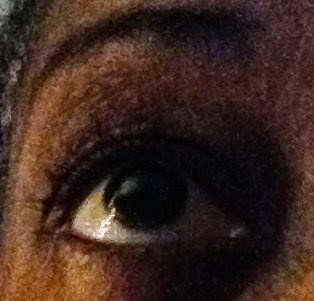 since we still had some time left, we decided to get our last time out on the town so to speak and decided to go out to one of our favorite restaurant for a meal.  I don't remember what I ordered, but I do remember the Cesar salad that we started with. 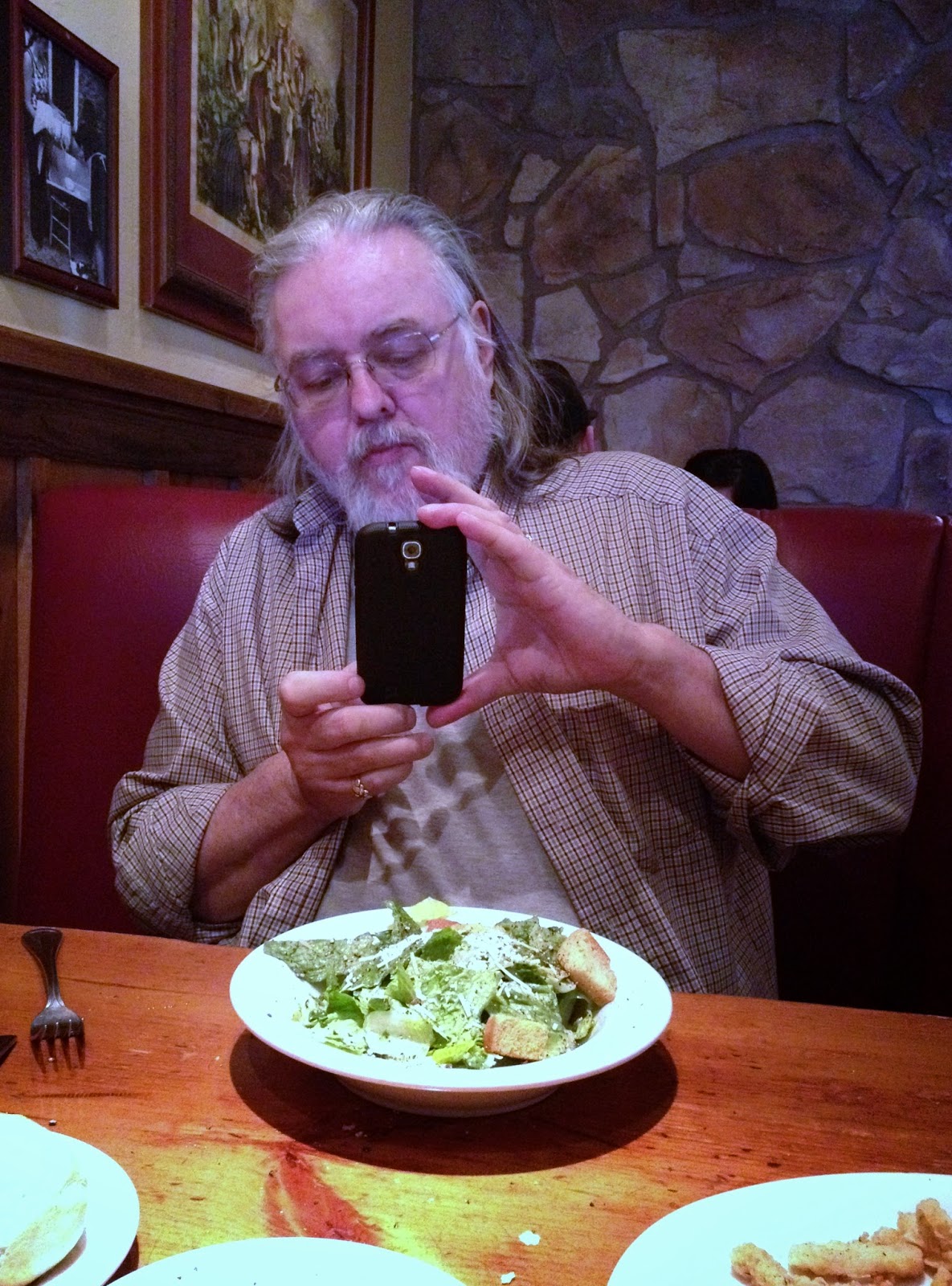 come to think of it, I think I ordered some tilapia in a spicey cream sauce with spinach and lots of Parmesan cheese. 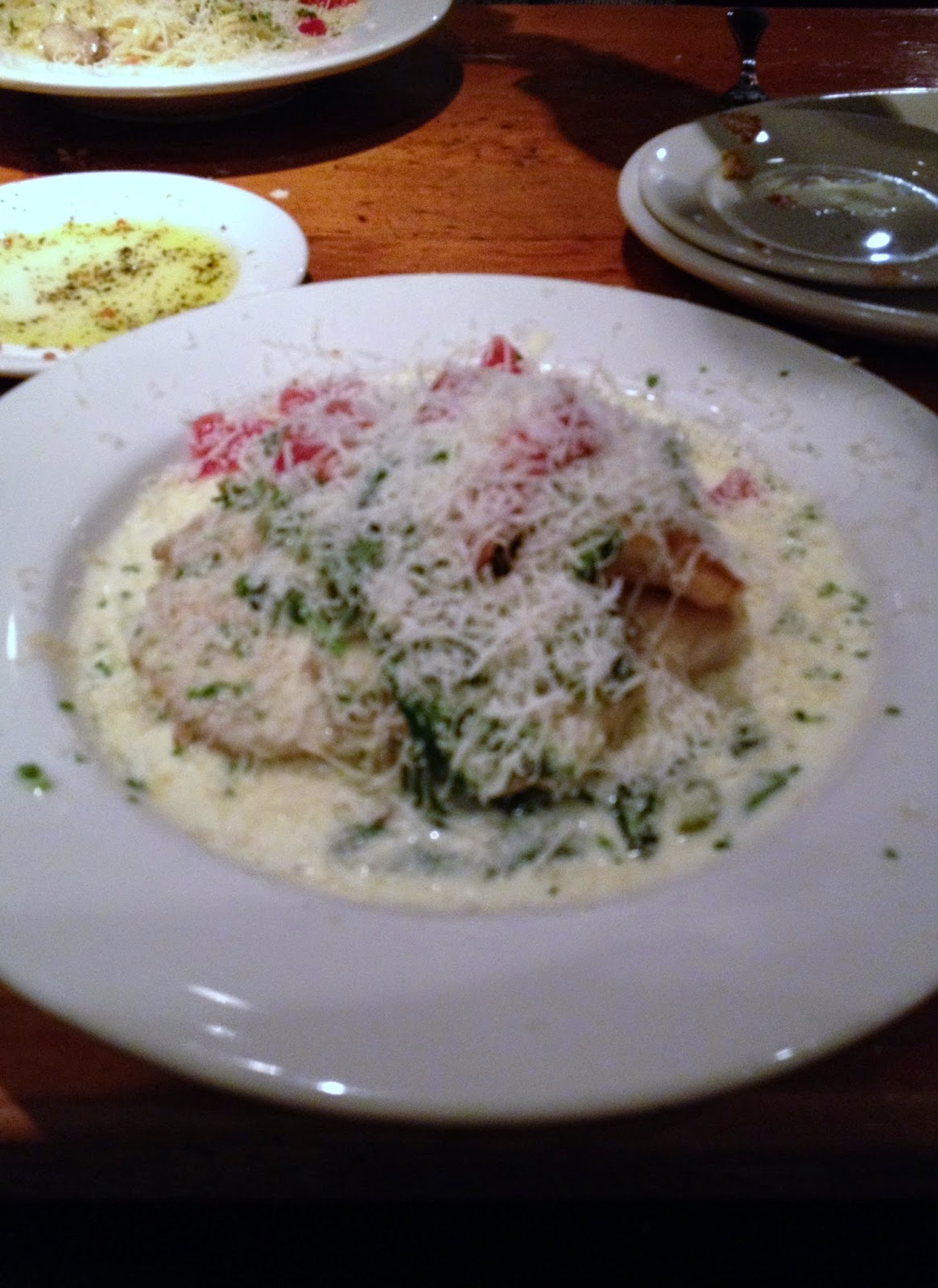 The waitress kindly volunteered to take our picture........:-) 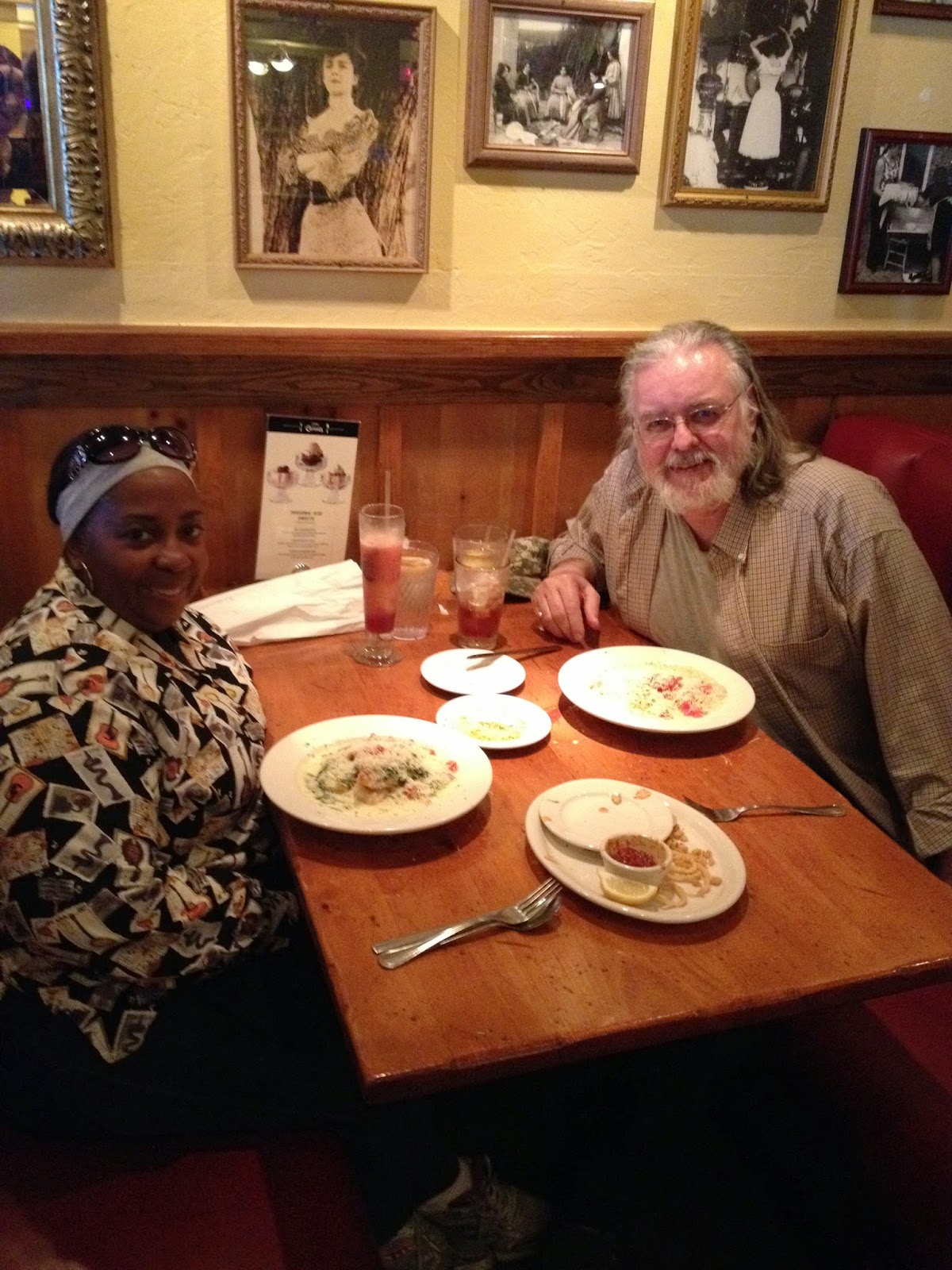 We eventually made our way to Lake Thunderbird near Norman, Oklahoma.  We only stayed long enough to take a couple of pictures.  Chris wanted to get a closer look out on the peer. 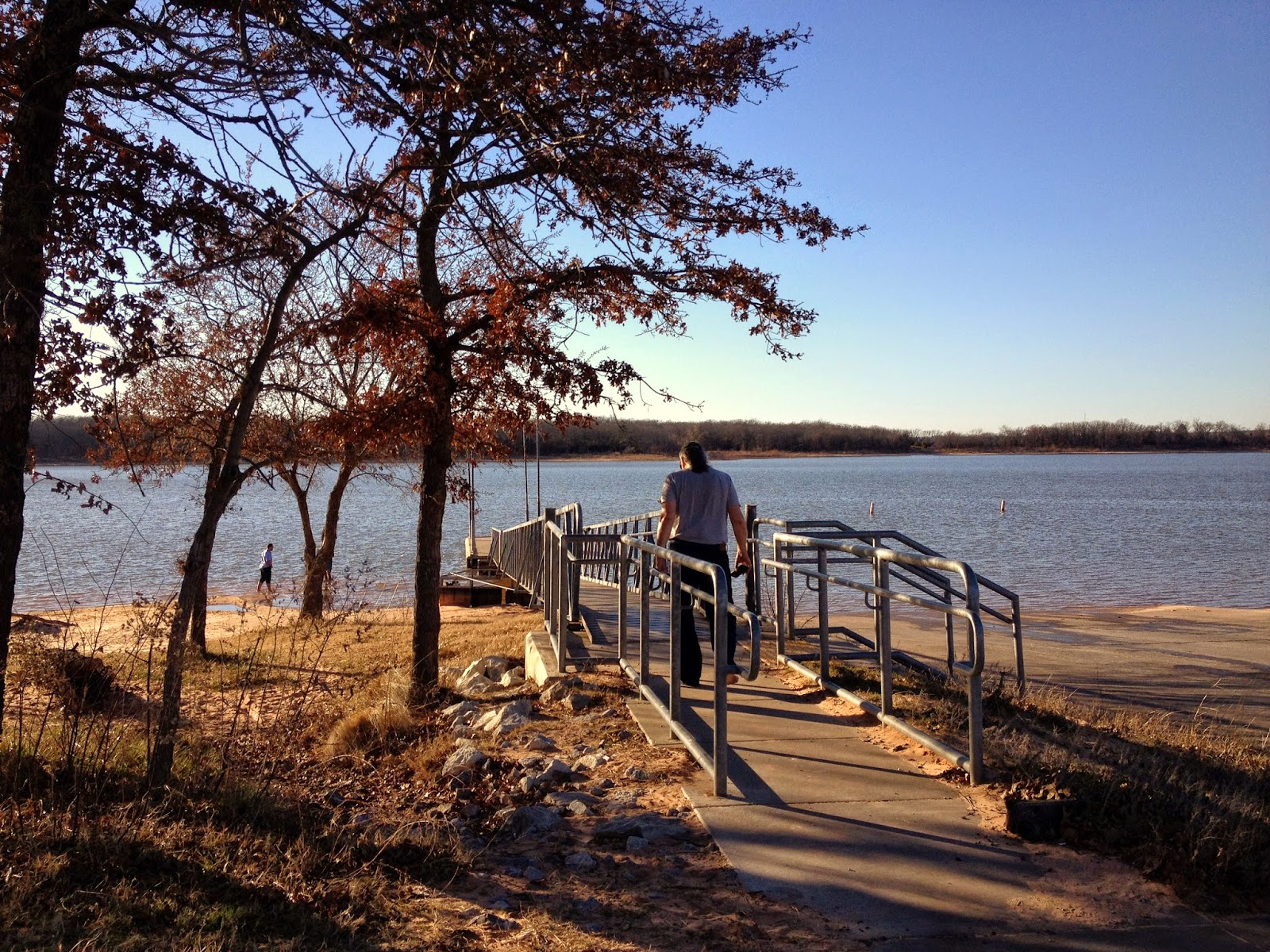 We didn't see the sign going it, but this shot was taking "backward" on our way out...ha.  So, there you go! 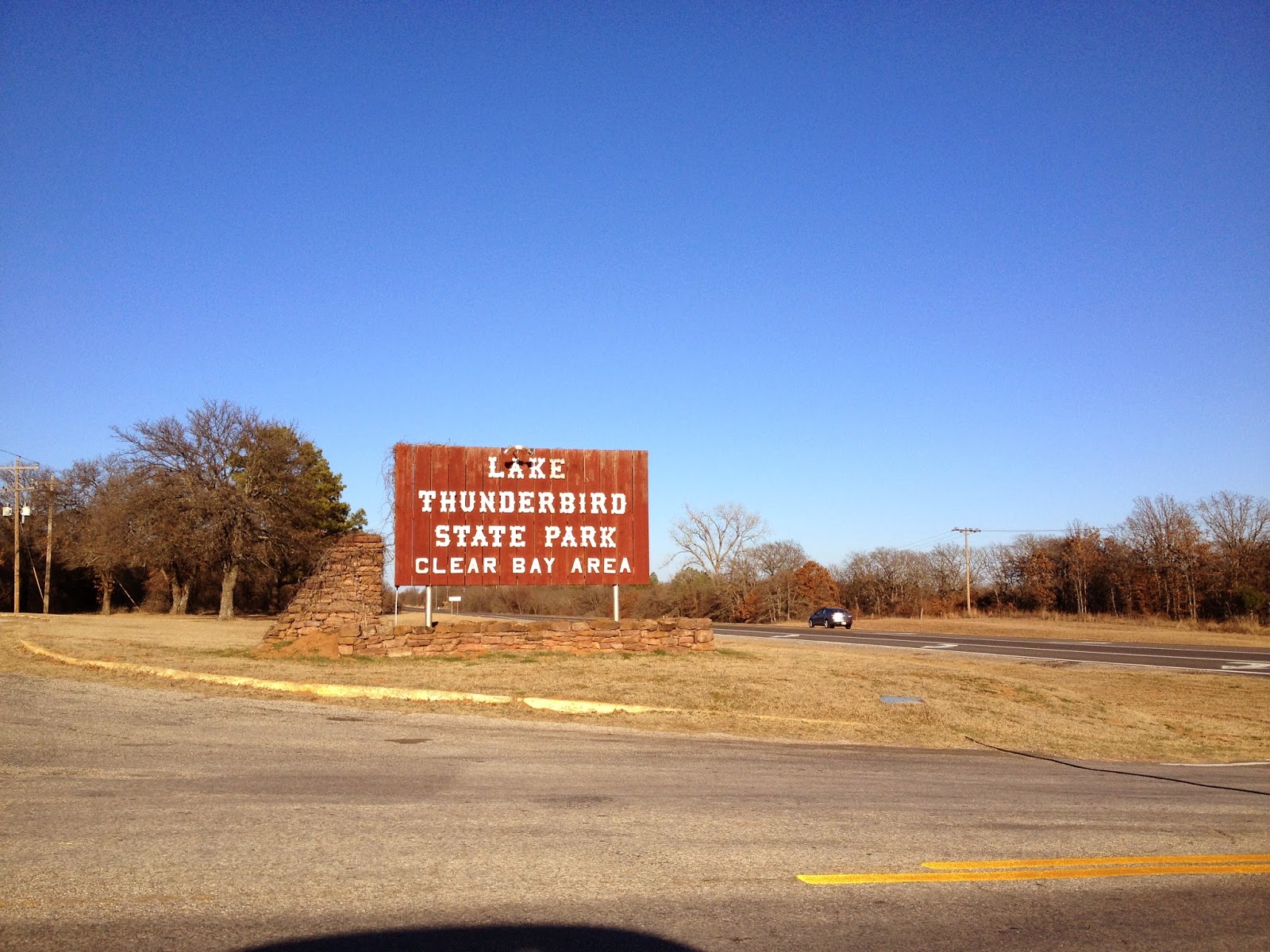 The Lord was painting a beautiful sunset again.  We got to enjoy that for a few minutes on the way back to Lawton. 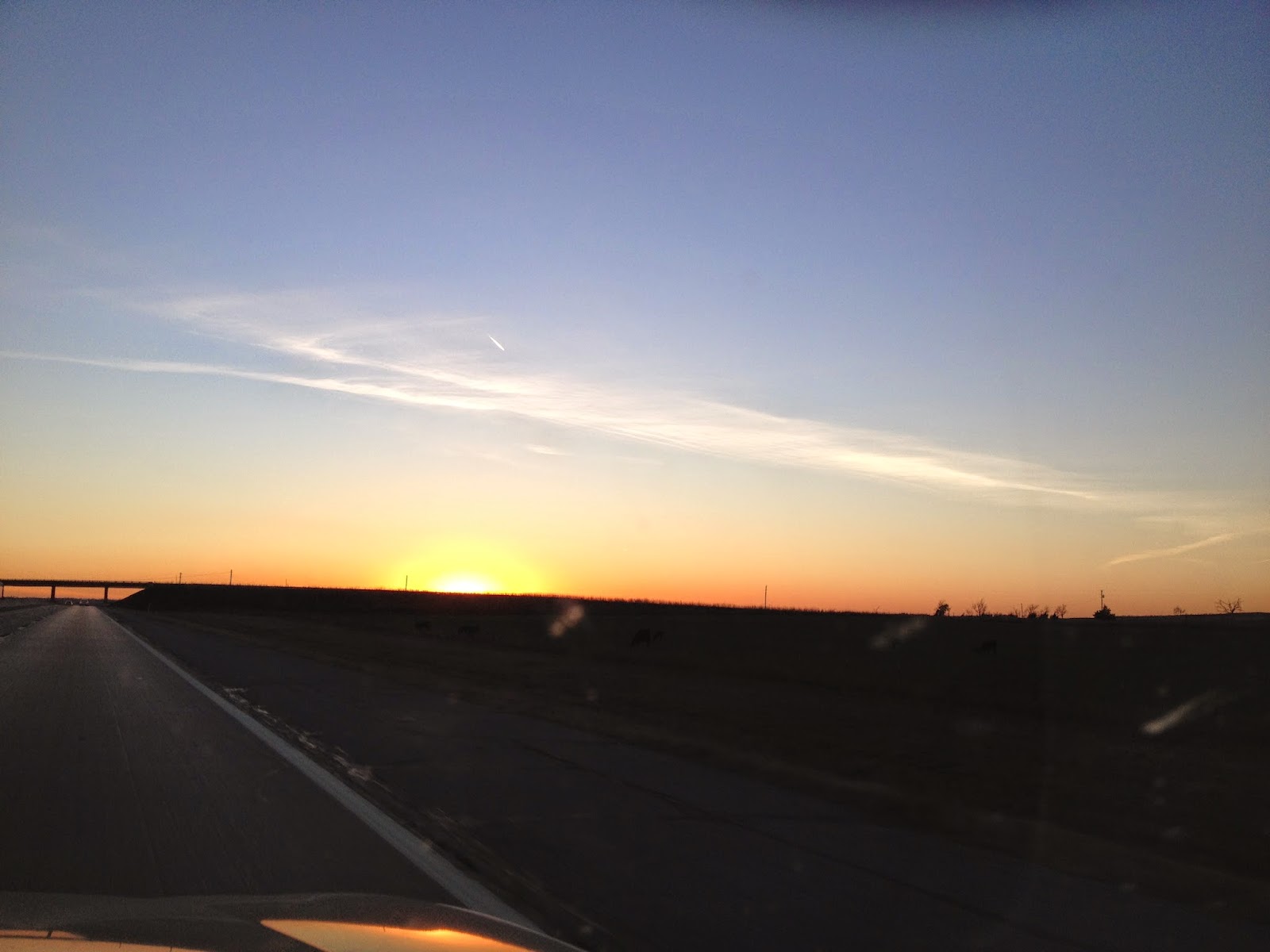 Soon, time was drawing nearer for us to get things in order to be loaded into the car. 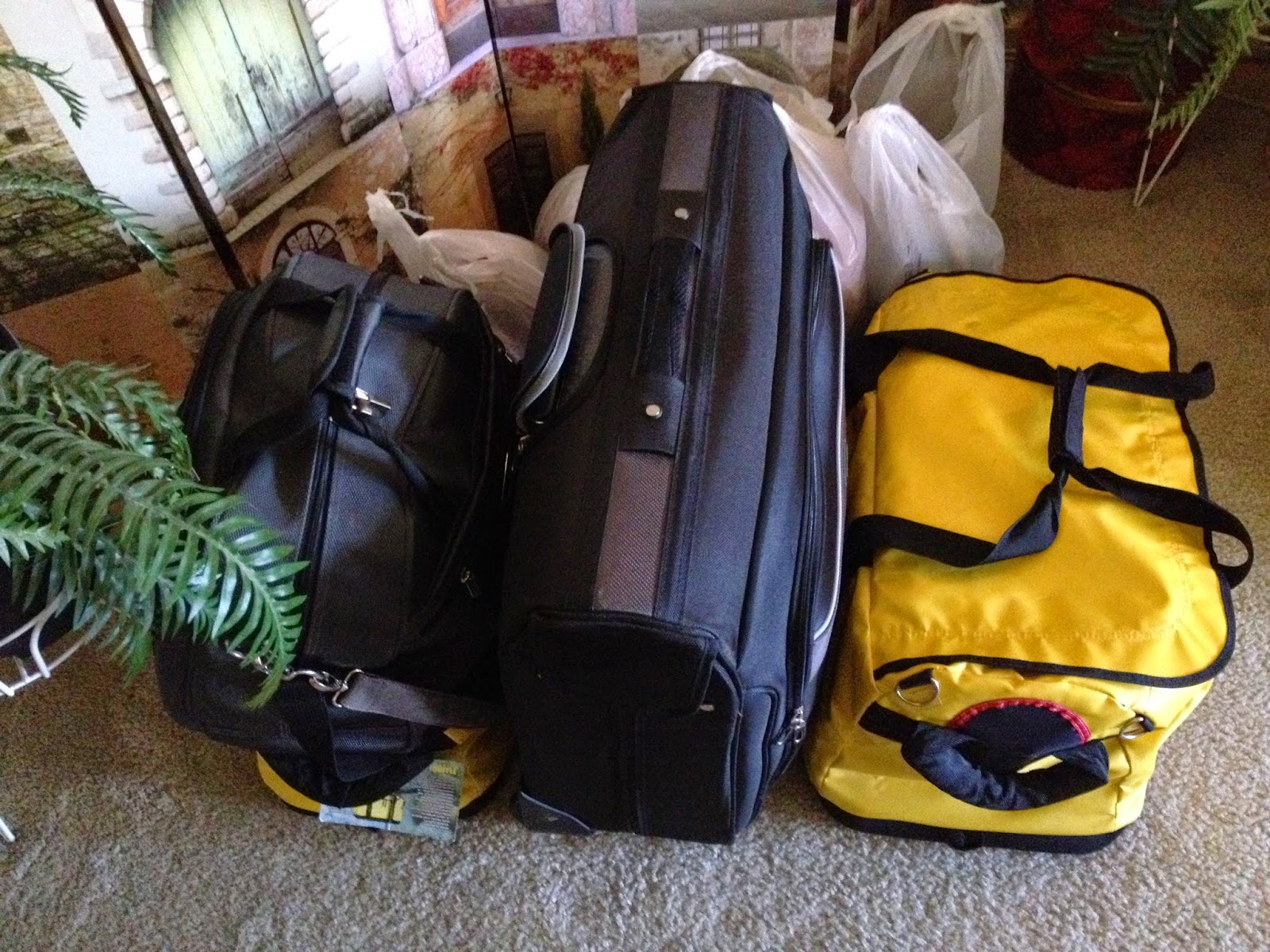 We were leaving most of the things we brought with us behind. 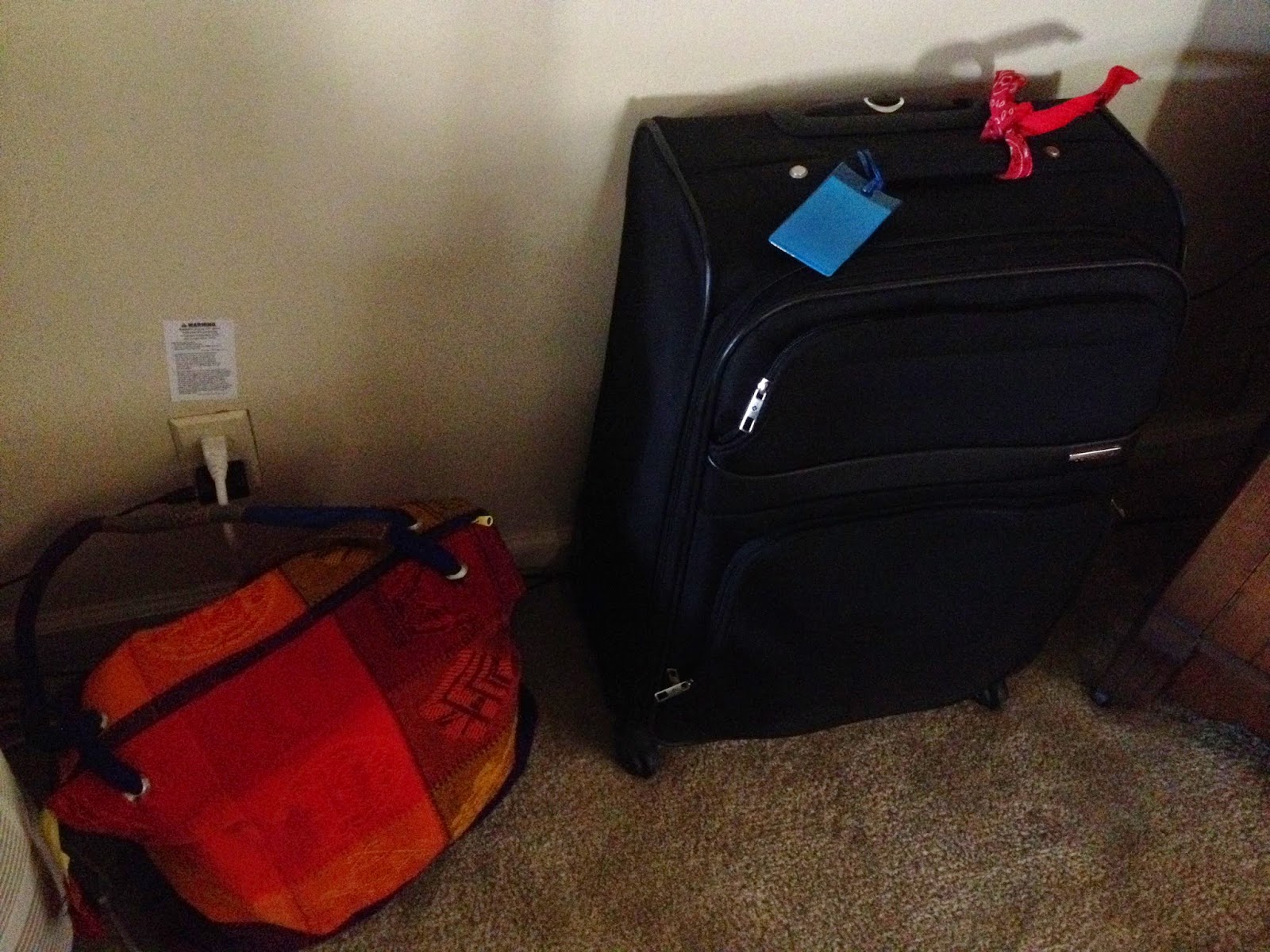 But you wouldn't think that were the case since the trunck was already full! 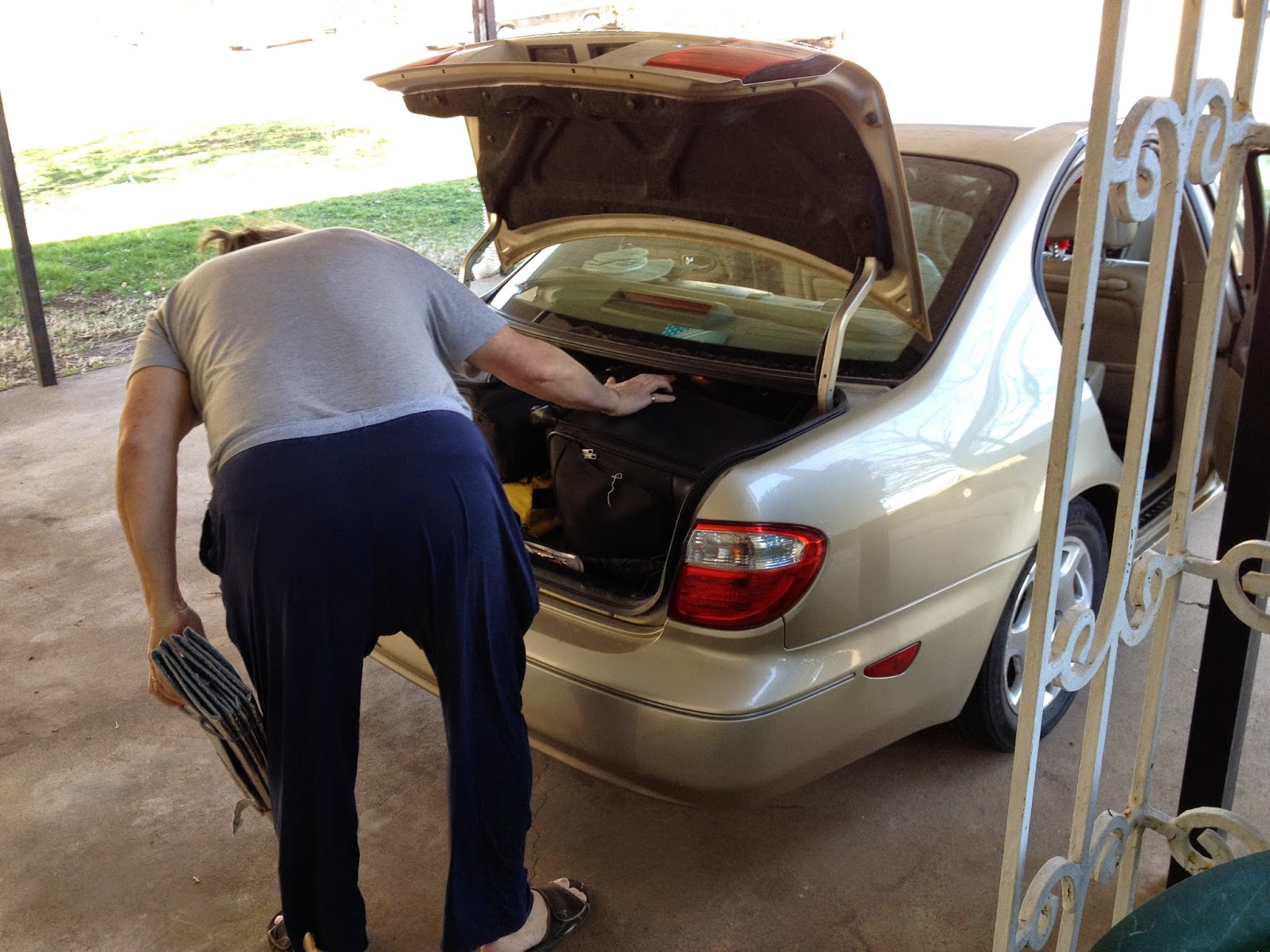 The morning finally arrived when we pulled out and started our trip.  I hate getting breakfast on the road, but when you get up at 5:00 am, there ain't much else going on!  Especially having been fighting what appears to be a terrible cold or a vicious flu bug for the past three weeks; fast food was not appealing.  Nevertheless, here we were. 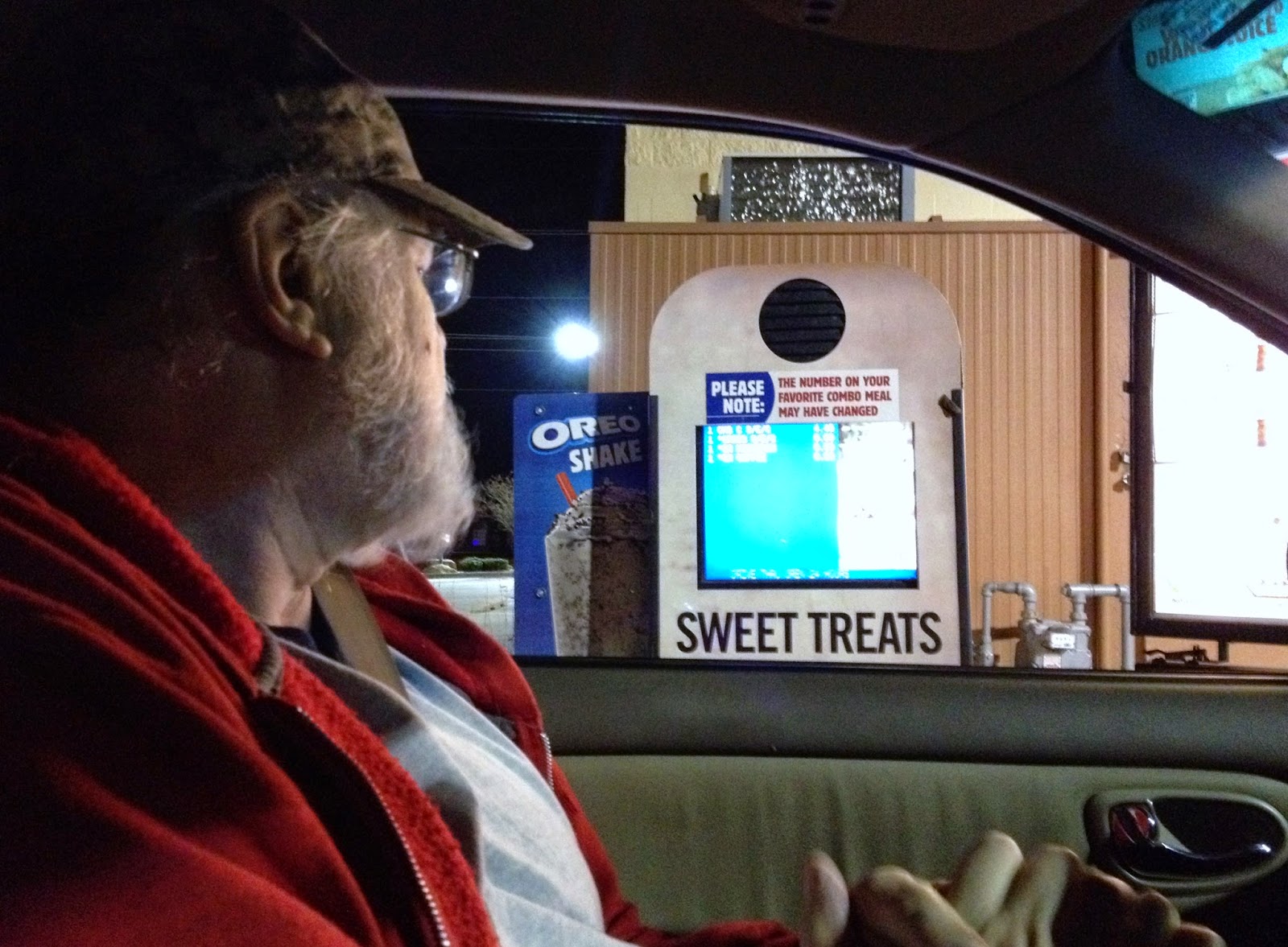 We were clipping along pretty good until we got closer to Texas.  Then it got really hairy.  It was quite slick and I was glad we did not have the scooters with us or the trailer! 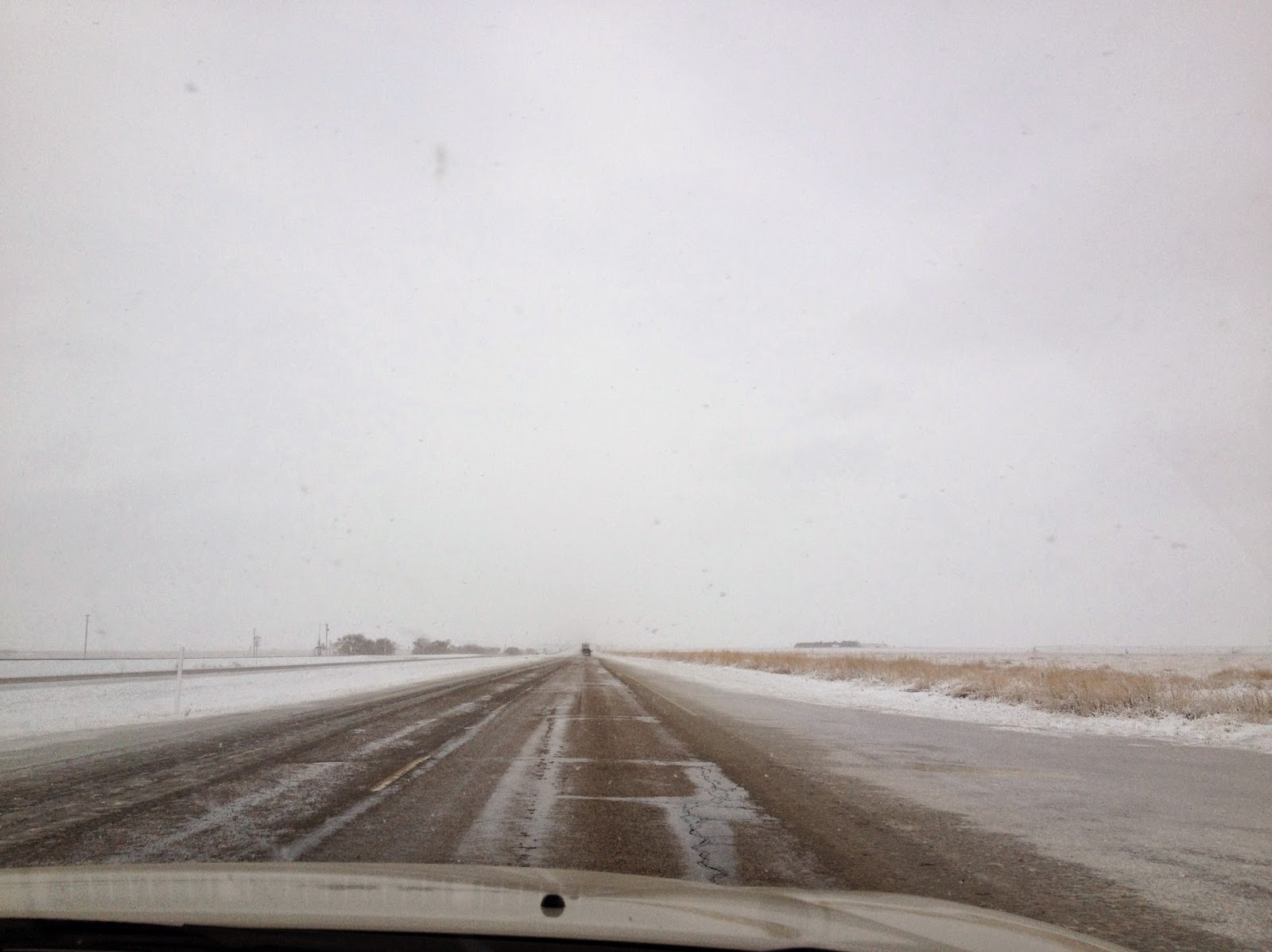 The temperature dropped to zero degrees with the wind chill to prove it!  We finally made it to New Mexico.  I had been so sick that I slept through most of the drive. 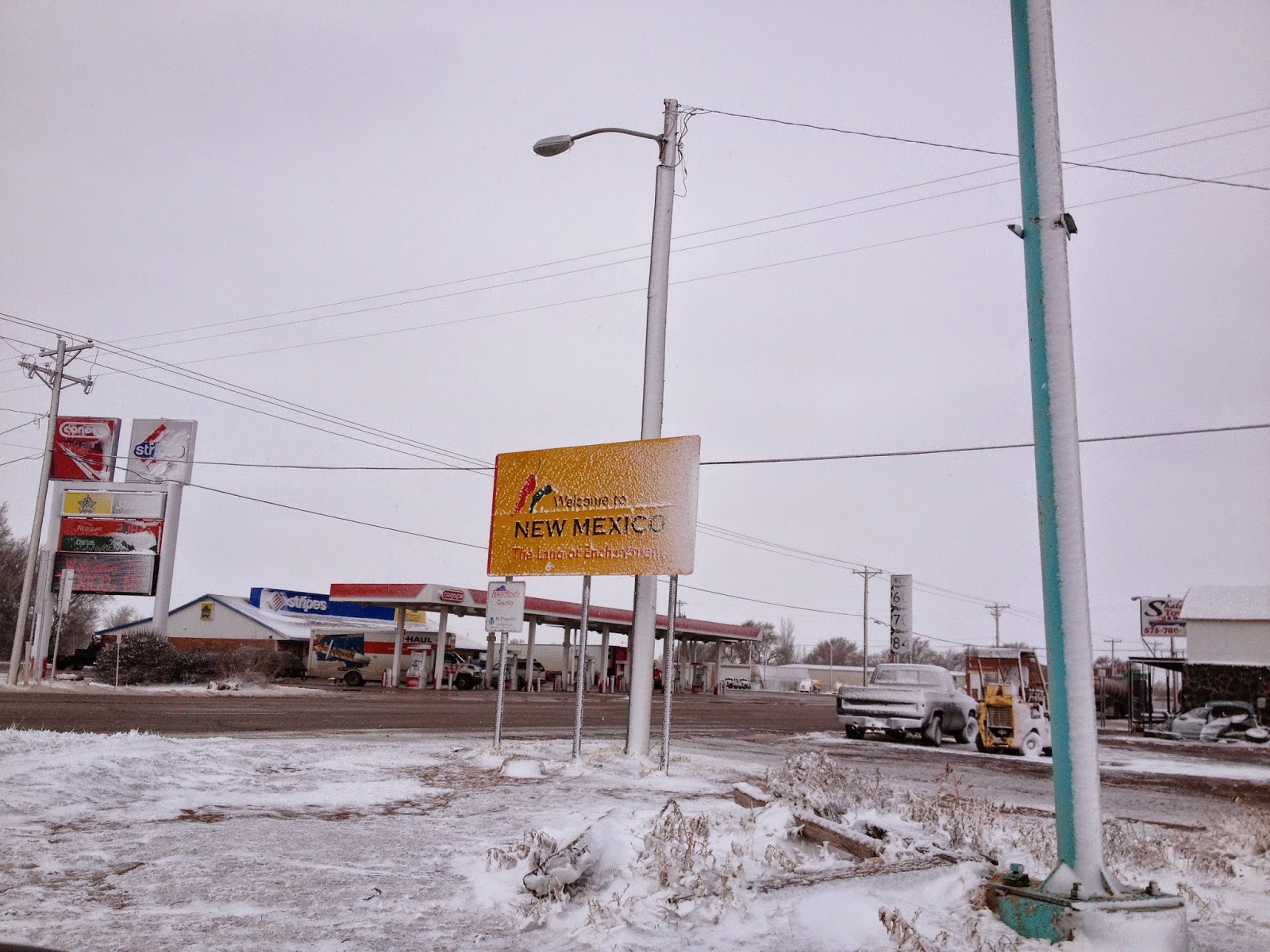 getting out of the car was quite the experience.  The wind was kinda high and biting and the car had these really weird ice formations on it that this picture does not do justice. 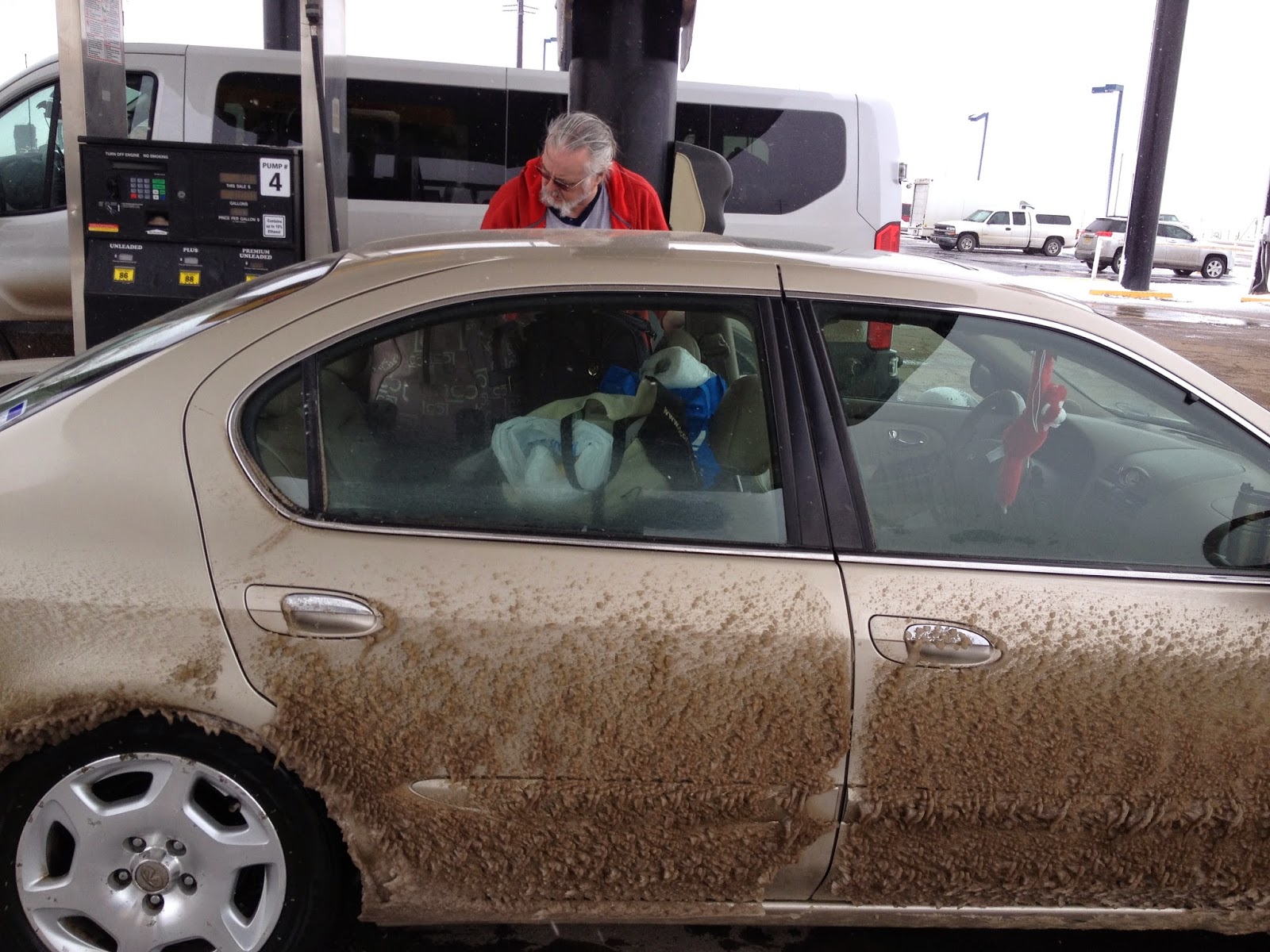 After gassing up the car, we thought to press on to Las Cruses, NM and spend the night. 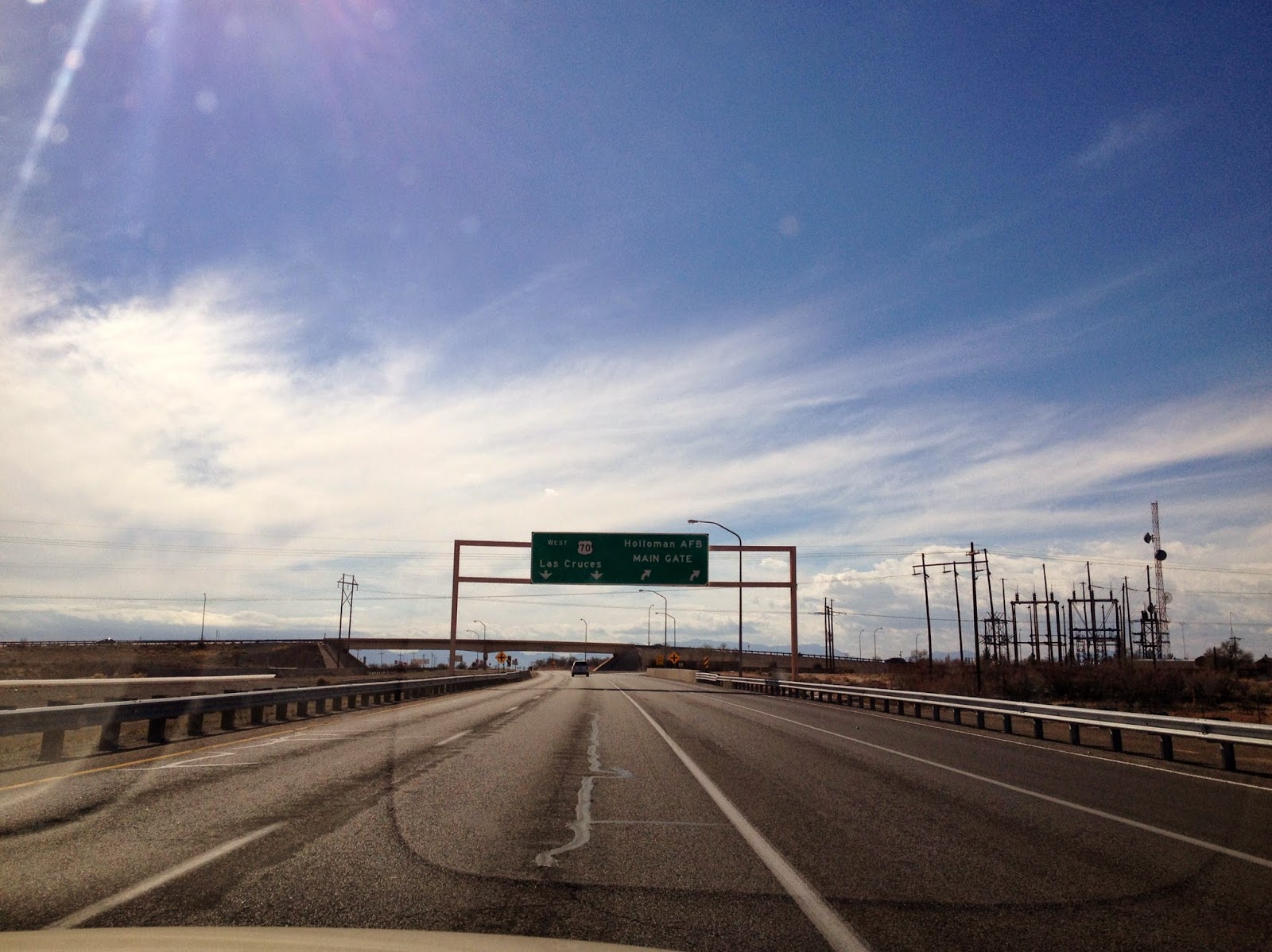 But then Chris got a second wind and decided to push through to White Sands, and stop at the Visitor's Center for a coupon booklet.  Sometimes, you can get really good deals on hotels. 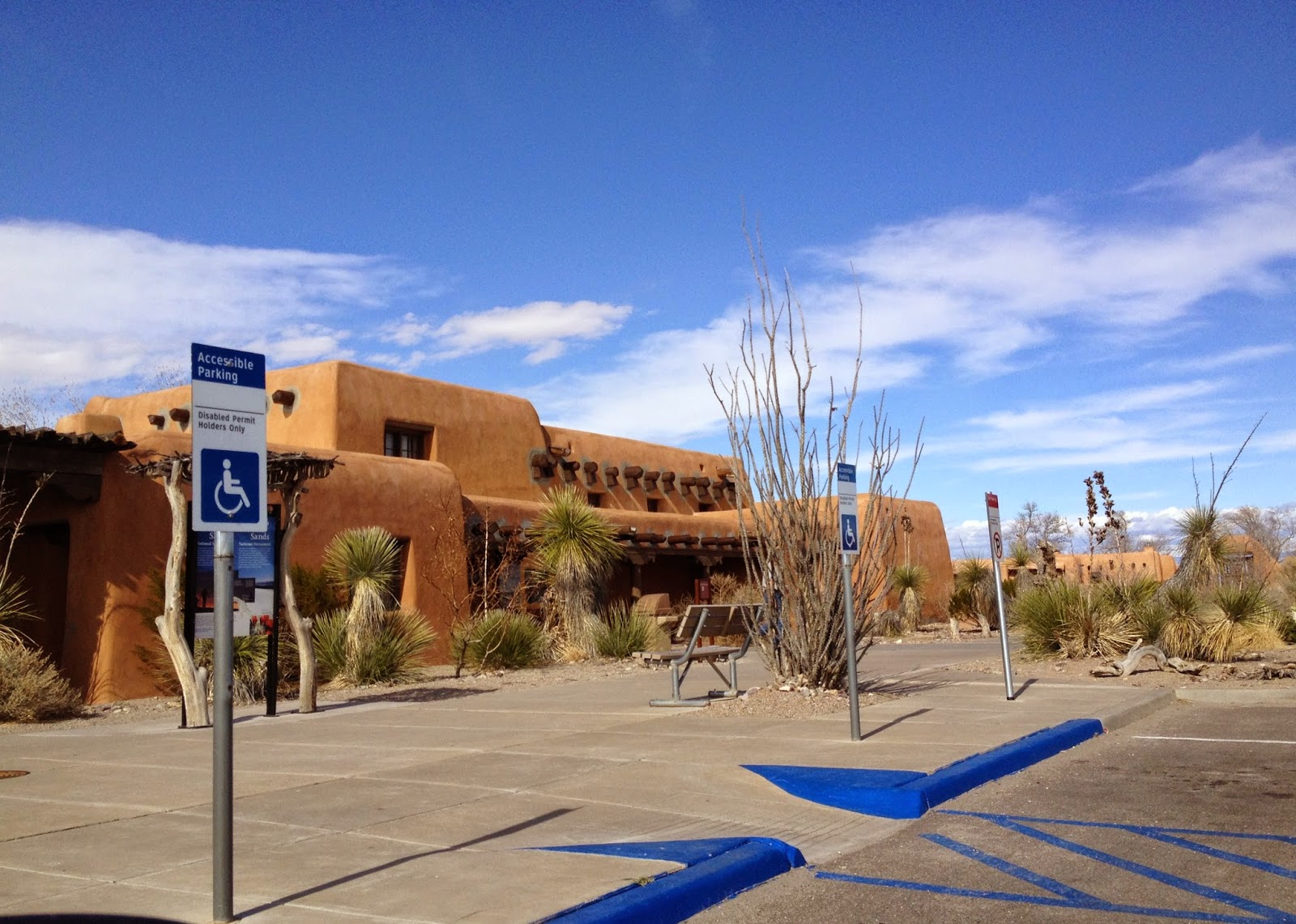 I am always so amazed at the color of the sand and the science behind the color.  I can't explain how it all happens, but it is quite a story for it to get that way. No wonder New Mexico is called the "Land Of Enchantment".....:-) 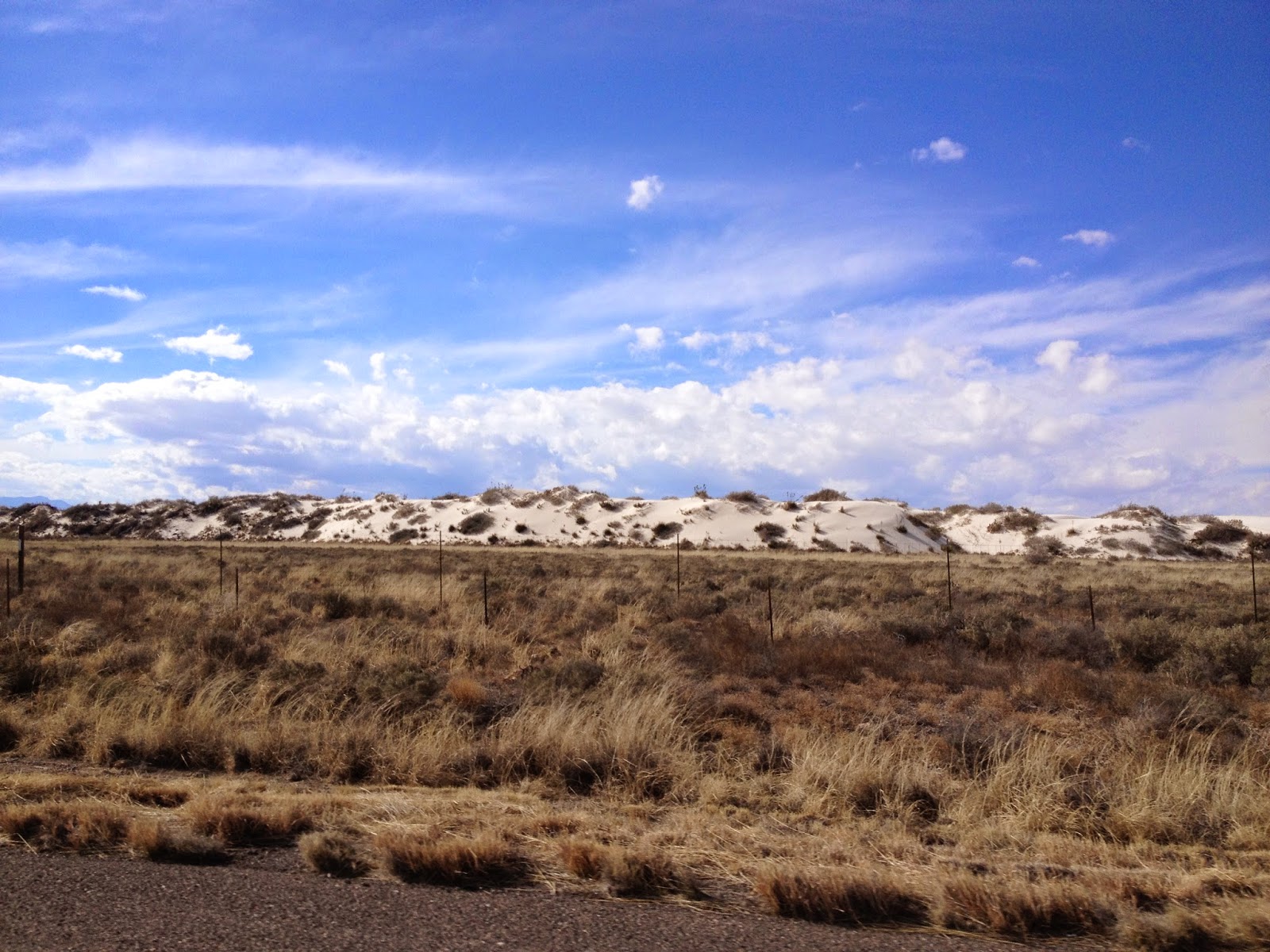 since Chris had his second wind and it was still going.  Then we got as far as Deming, New Mexico and decided to pack it in for the night.  It was a 12 hour day.  Time to get some rest. 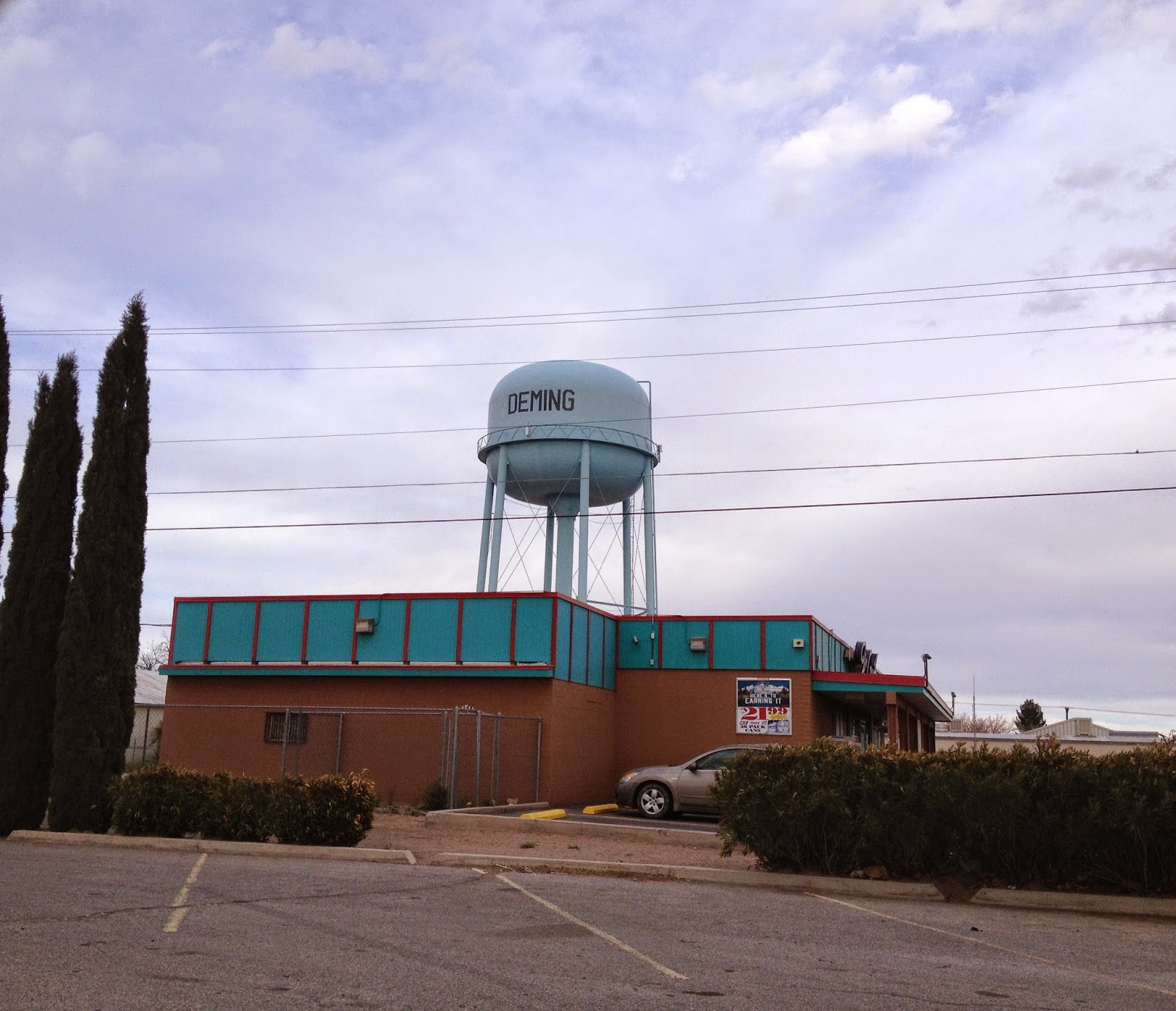 The hotel we checked into seemed almost deserted, but that was ok.  Better than a lot of noise! 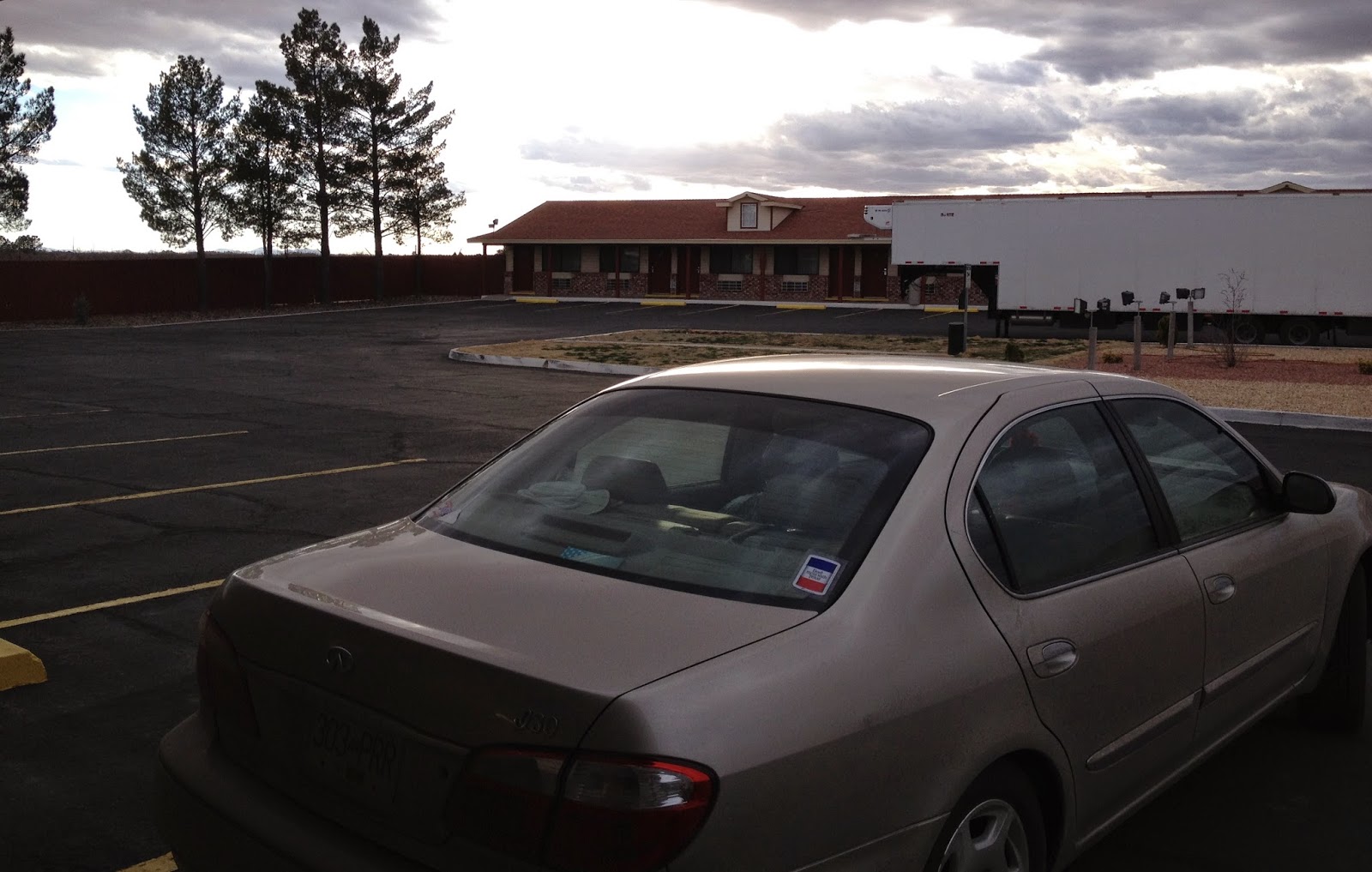 The sun was setting and so was I at this point even though the flu bug and me sleeping most of the trip. 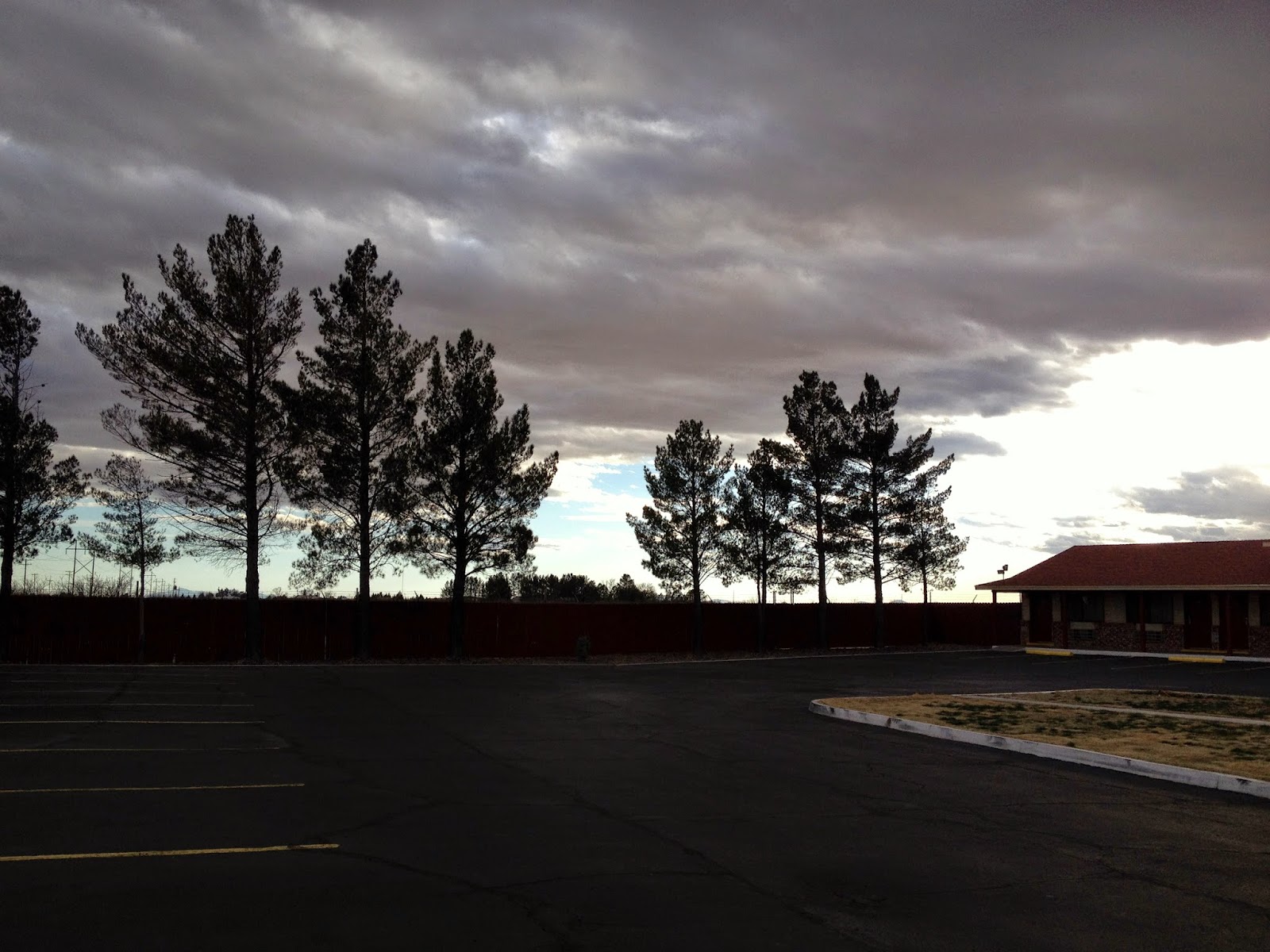 Here is my sweetie getting his last pictures of the day...... 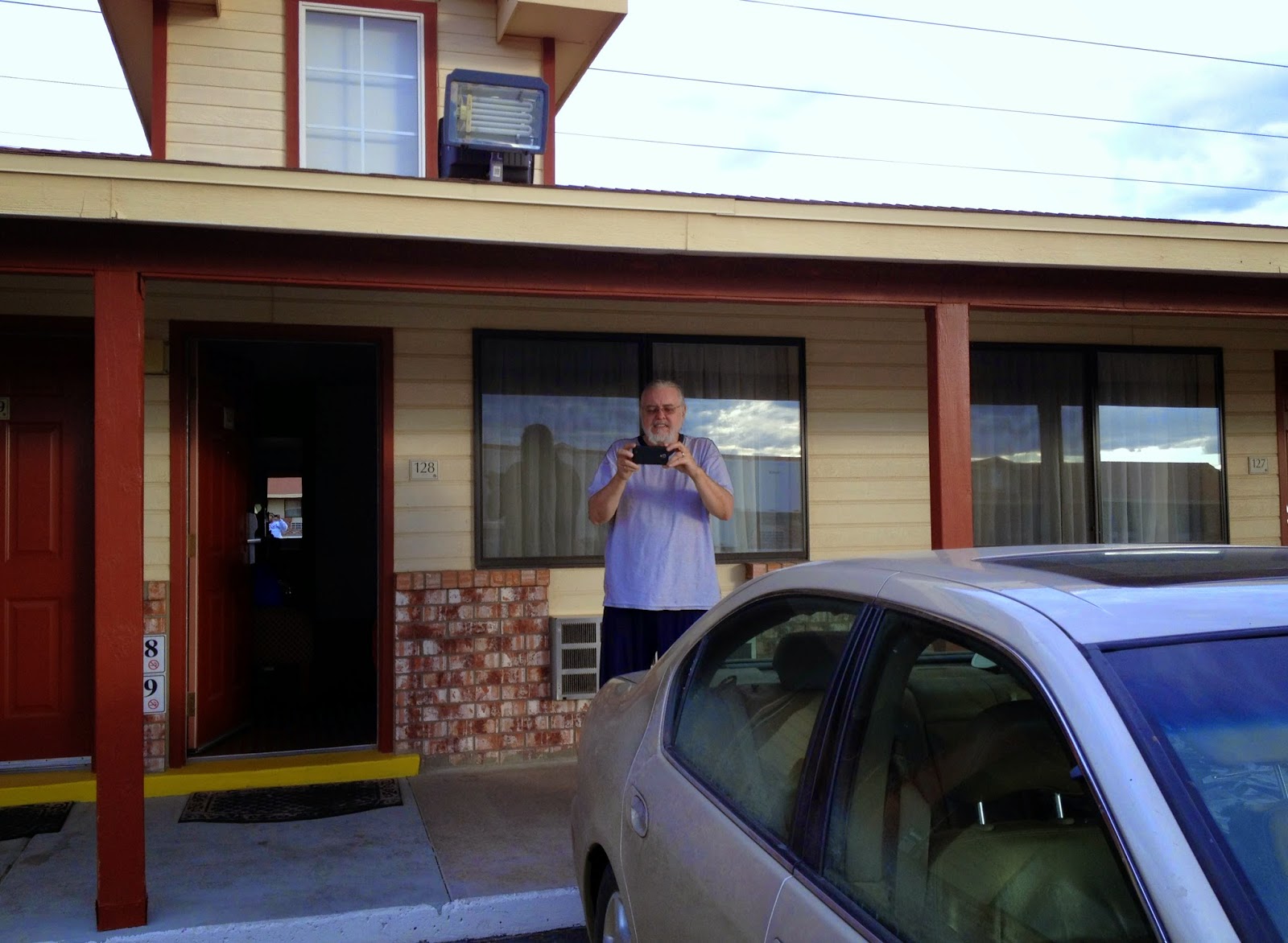 But once he got in the room and sat down, that was all she wrote!  Road fatigue set in.  Well, 6:00 am comes early.  Next stop, Los Angeles, California! 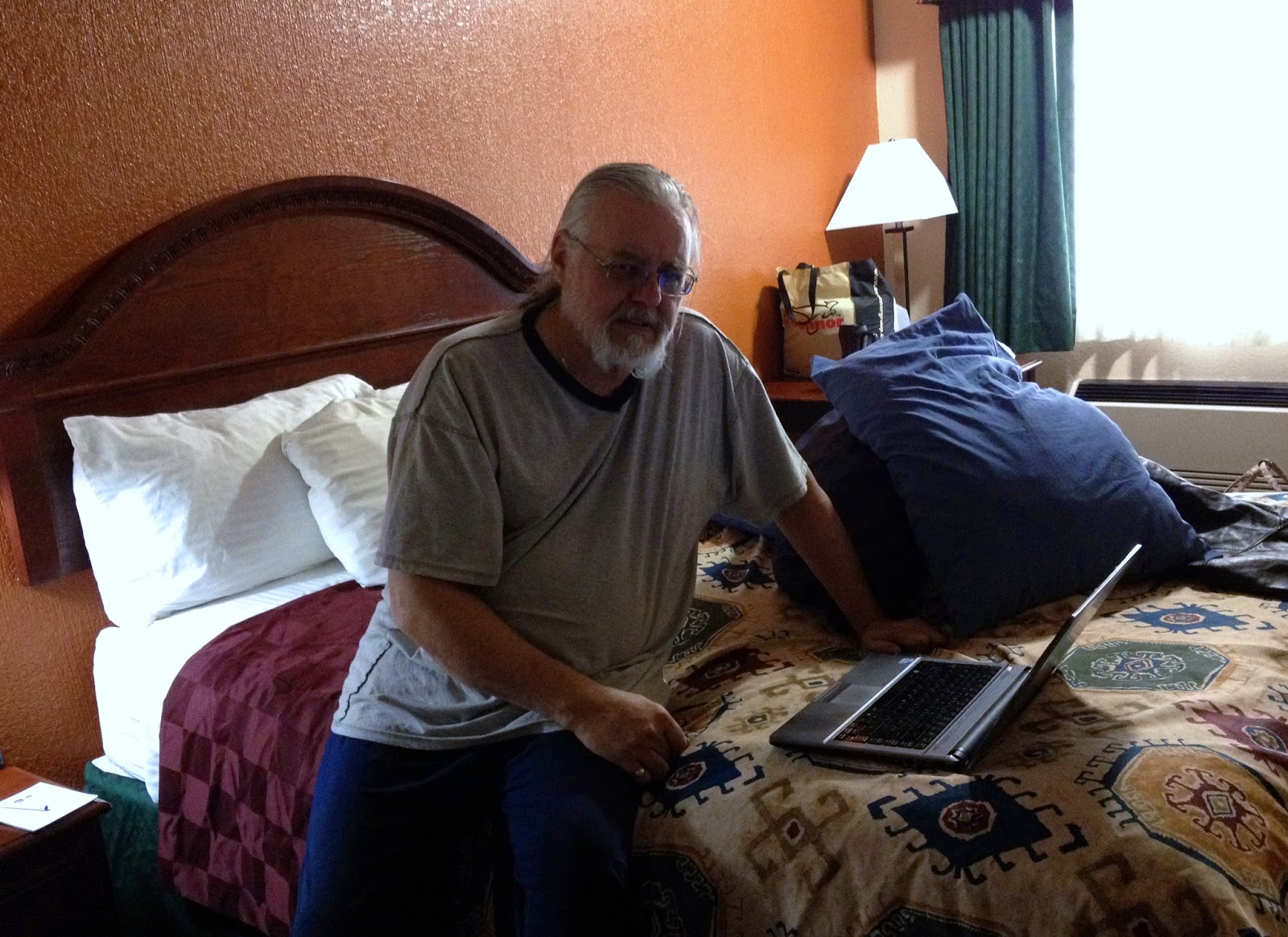