We woke up to 36 degrees and quite brisk outside.  It was very dark and 5:30am.  The plan was to be on the road in one hour.  We made it!  Breakfast was gross, so after tossing that in the can, we headed out.  I was glad I had packed some heavy jackets for us.  I needed it. 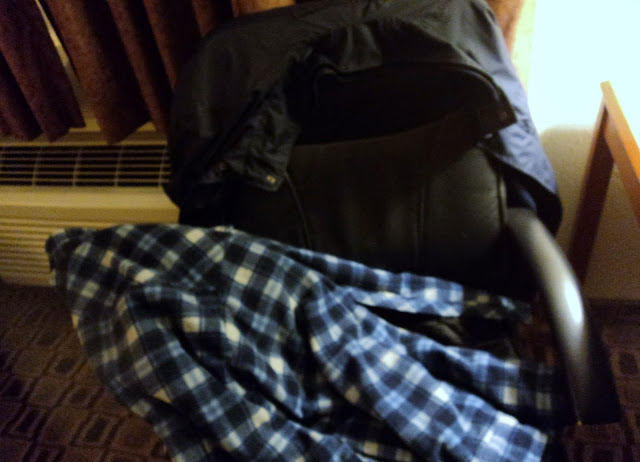 First order of business was to get some gas.  There is so much land with nothing happening on it that it was hard to tell when we would run across the next gas station.  Better safe than sorry! 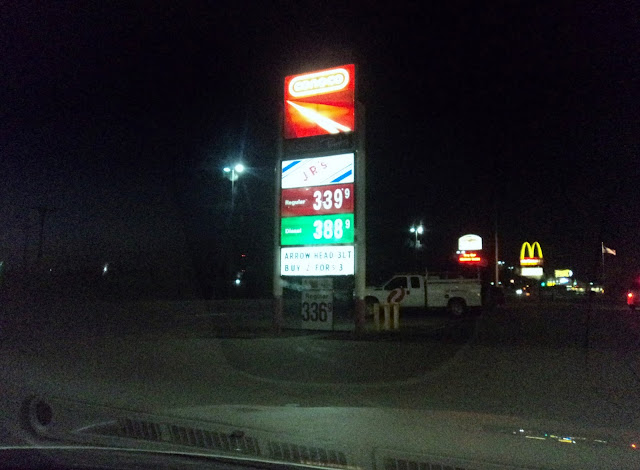 The sun started to come up a while after we had taken off.  It was beautiful as always.....:-) 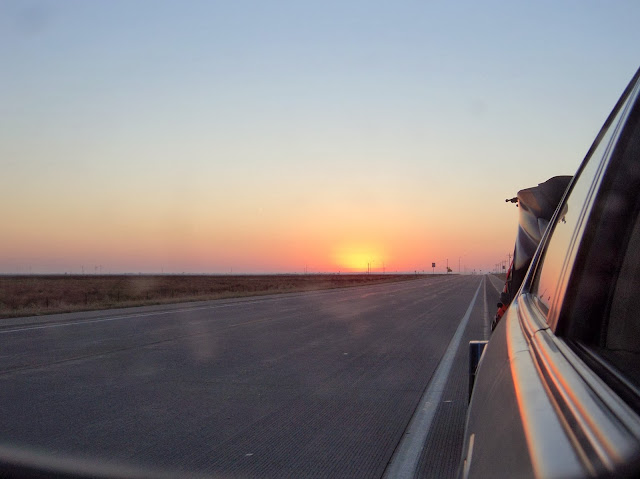 The sky went from an orange, purple-ish color to a light pink and blue.....very cool. 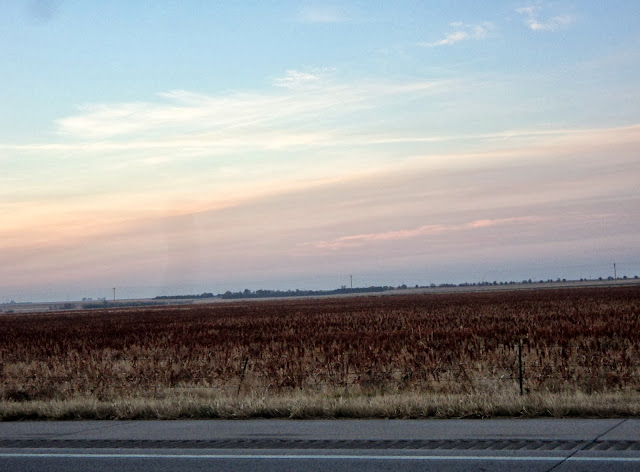 We came through Kit Carson, Colorado.  I had heard of Kit Carson, but didn't remember "what" I had heard about him. After plugging his name into the internet, I found this:

There was a museum in his honor, although I have no idea what was so honorable about fighting Indians.... 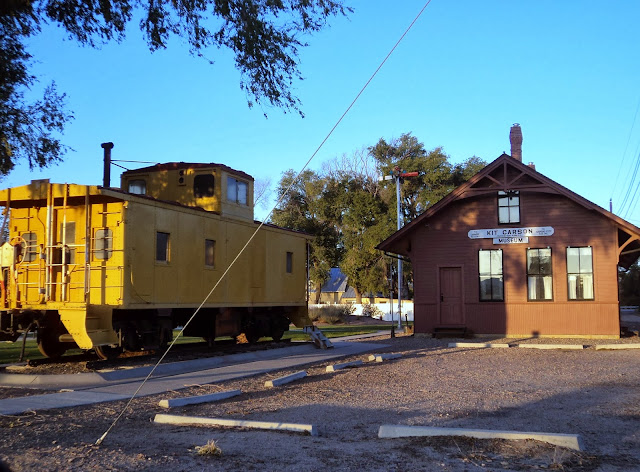 Across the road from the museum was this gated yard that had all manner of stuff that I would have loved to have in my humble garden back in Oklahoma... 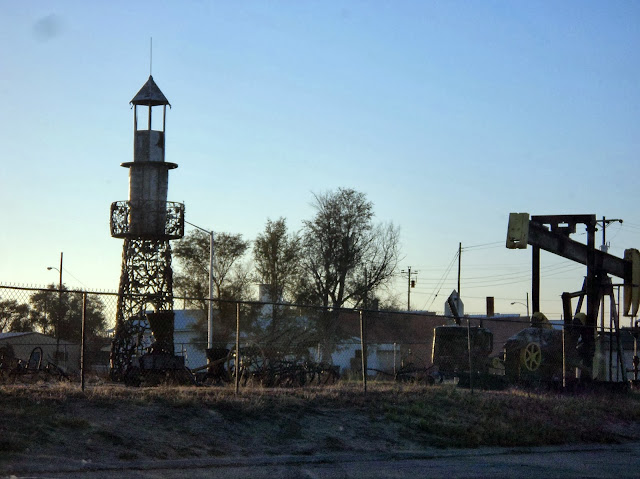 We circled the block and took this frontal shot of the museum.  It was about 7:30am and it was closed. 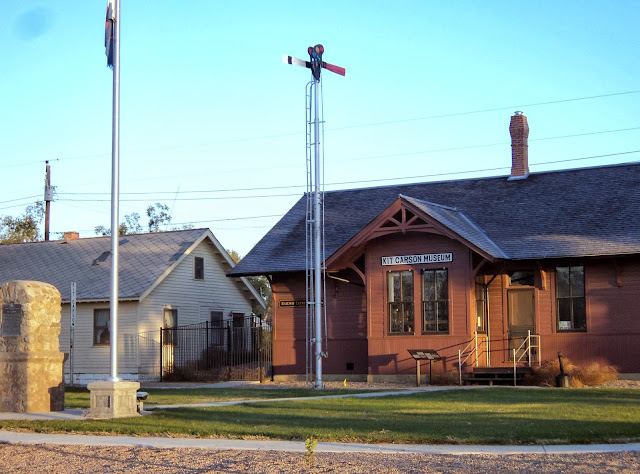 I guess they really like the guy to have a town named after him. 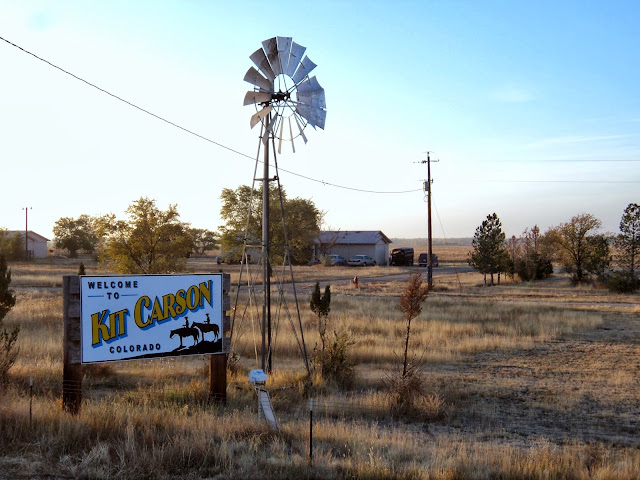 After driving a while longer, we decided to get some gas.  It was really brisk out and I almost decided to take my potty break after the sun warmed up the place a bit more...but alas!  It was not to be.....ha. 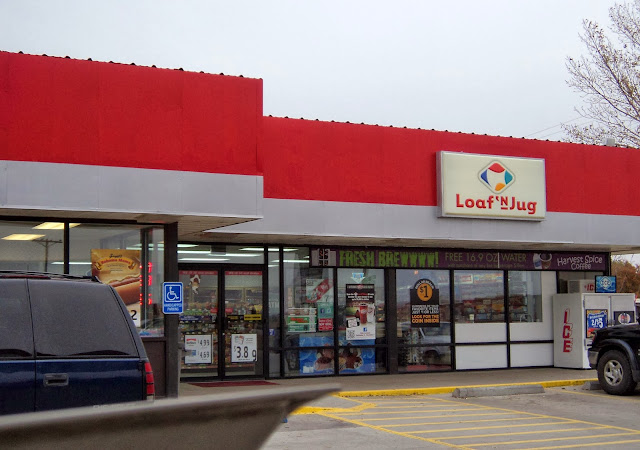 You know it's cold when you see Mr. Chris rooting around in the car for something a bit more appropriate to where for the temps...... 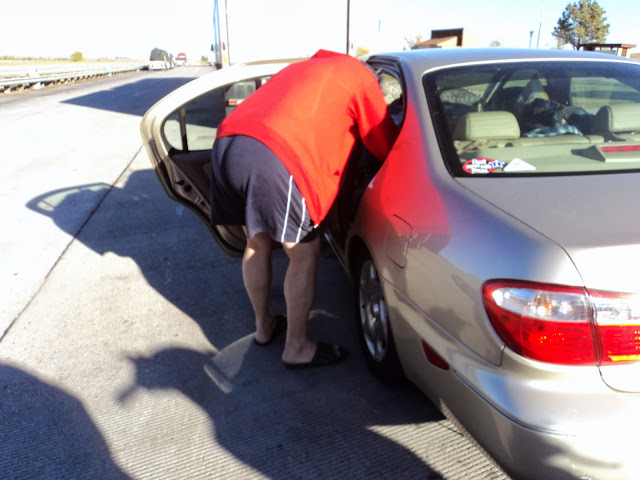 Ms Vickey and Maj almost dissappeared into the hay load on this truck. 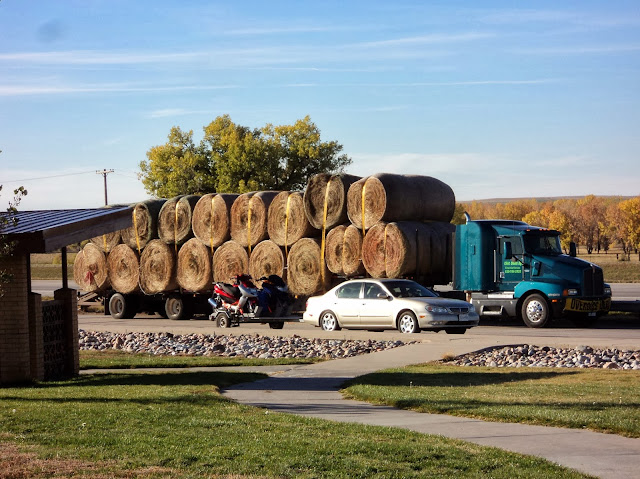 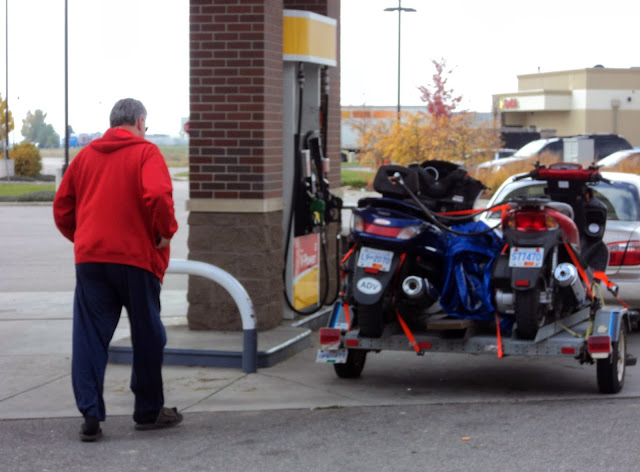 gassing up and getting ready to go again..... We FINALLY made it to Wyoming and talked about how far we would continue before stopping for the night again. 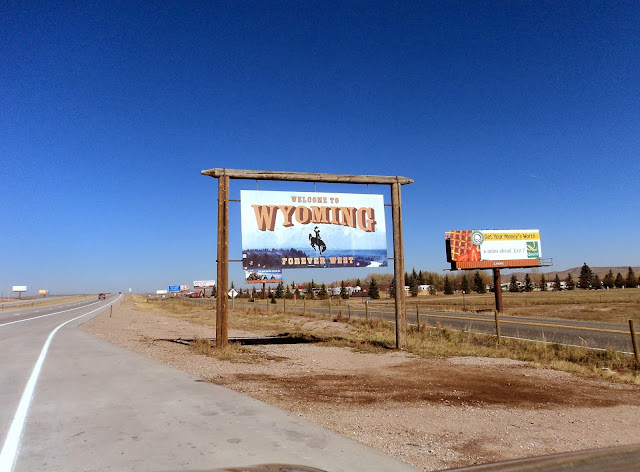 It's amazing how these rock thingees are formed. 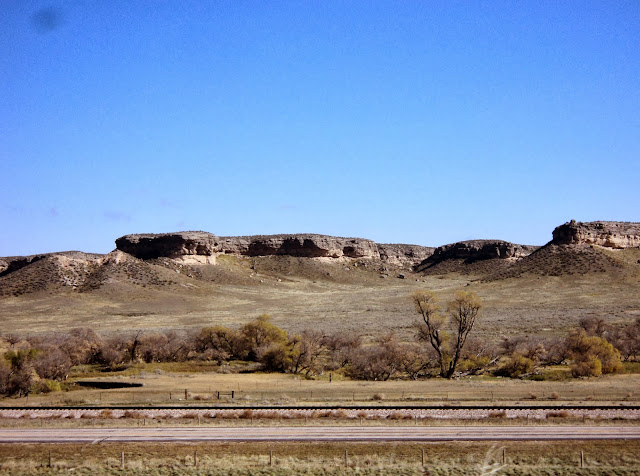 Some of them have the strangest shapes....! 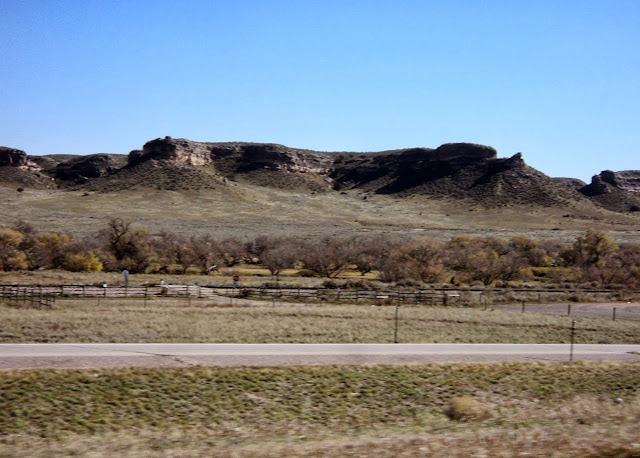 Chris was exhausted and I don't like him drinking those overloaded energy drinks.  It was time for me to drive some and let him sleep.... 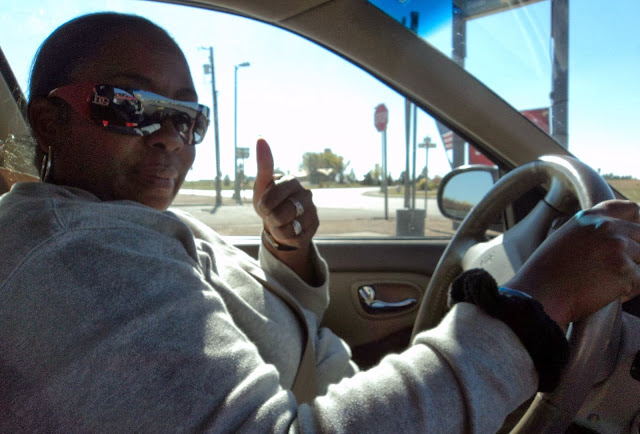 It was less than 5 minutes and he was out like a light.  I decided to try to take a couple of shots when it felt safe to do so. 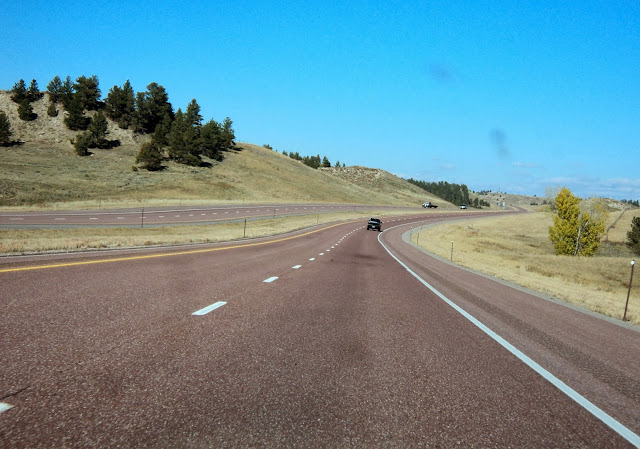 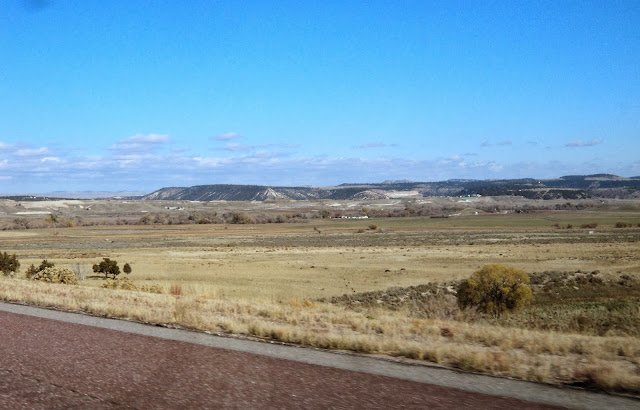 I loved this, but was not able to get the whole thing because it wasn't my day to die....haha 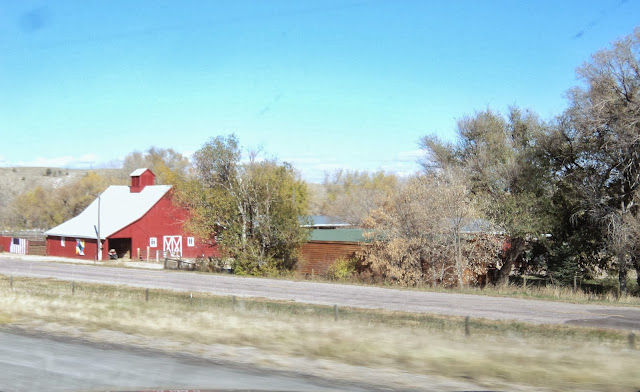 I had tried for the longest to get pictures of the many trees with all of the fall colors, but always spotted them while I was already passing.  This was the only one I was able to get.  Sorry about the reflection of the dashboard....:-(.  I got a little "hinky" trying to drive and take the shots.  So, I decided to put the camera down.  This was the last "moving" shot I took. 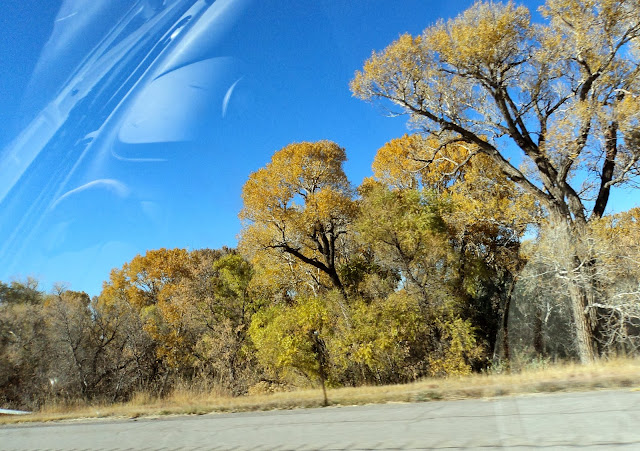 Chris slept for about 45 minutes and then took over driving again.  He'll see what I had been doing all that time when he sees this post! hahaha.  We finally reached Caspar, Wyoming and checked into a hotel.  We found out AFTER checking in that they had no luggage rack!  ??????  What hotel doesn't have luggage racks????  THIS ONE!  Alrighty then....got a plan be that we can work.....haha.  I took the screen out of the window and had Chris pass me the stuff through the window.  Who needs a luggage rack anyway! 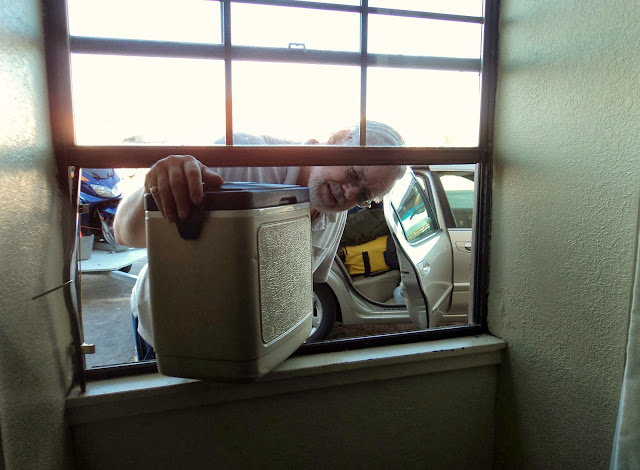 After getting our overnight stuff in through the window and replacing the screen, we settled in for the night. 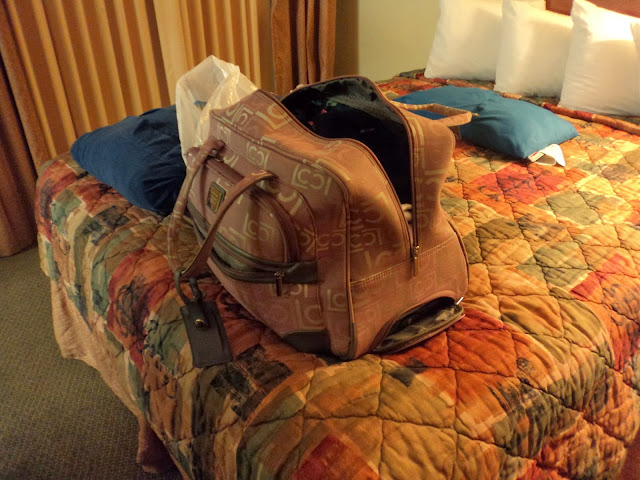 Our plan is to try to make it to Butte, Montana tomorrow.  It will be another early and very long day.
See you there!
Posted by Tripping Sister! at 7:21 PM 6 comments: