I know, I know!  Seems like a stranger just poked her head into the world of blogging.  It has been a very long time since I have posted.  Lots going on here along with the crazy weather that most of us have been having.  I usually hibernate when it gets cold.  So, other than writing about food; which I have no problem doing, there isn't much to talk about.

All of the pictures in this blog were taken through one of my windows.  So, please forgive the shadows or strange reflections that you may see.  The weather here had been quite impressive for a while.  We had snow and a lot of it!  I love the snow as long as I am not driving in it. 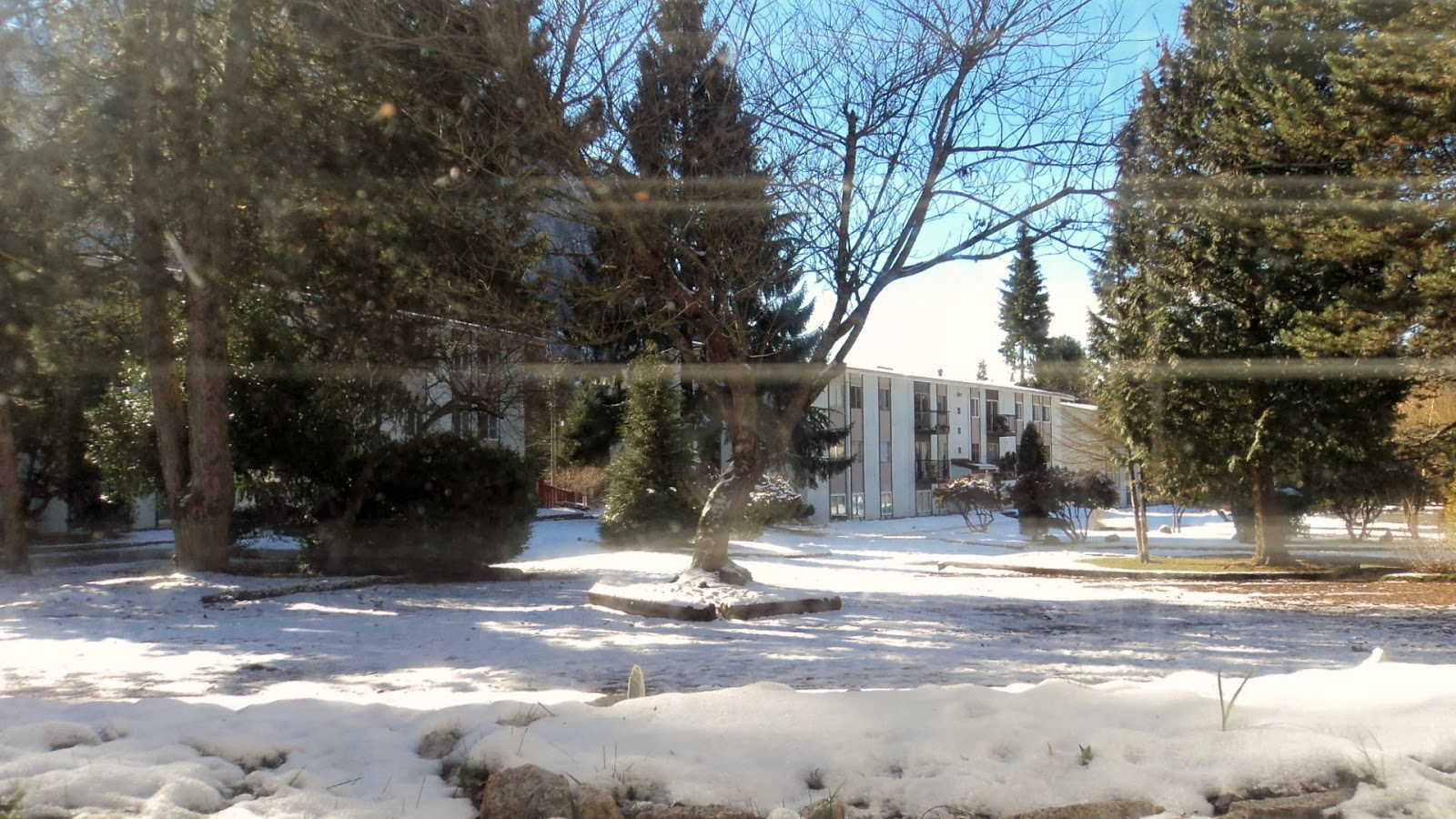 The weather cleared up for a little while and I was already thinking of the Spring flowers that were going to start showing...:-). But then,  we received word from the Strata that the condo complex which we live in was due for a drainage remediation around all of the buildings. This meant that whatever we had previously received permission to plant in our little area had to be taken out or destroyed. At least for now.  We do still have permission from the Strata to replant flowers if we want.  But we don't know what kind of area we will be left with.

The contractors were going to be doing extensive work around the buildings to help alleviate the problems that come with aging buildings and poor drainage. We decided to snatch out of the ground whatever seemed worth trying to salvage and let the rest go.  This is what we were able to save:  Two pots with about 8 hyacinth in each,  three pots of tulips with about 8 tulips in each pot of various sizes and colors and one large pot with grape hyacinth in it.

Here are some "before" pictures from previous Spring plantings:

Tulips. These were planted just outside of our living room window.... 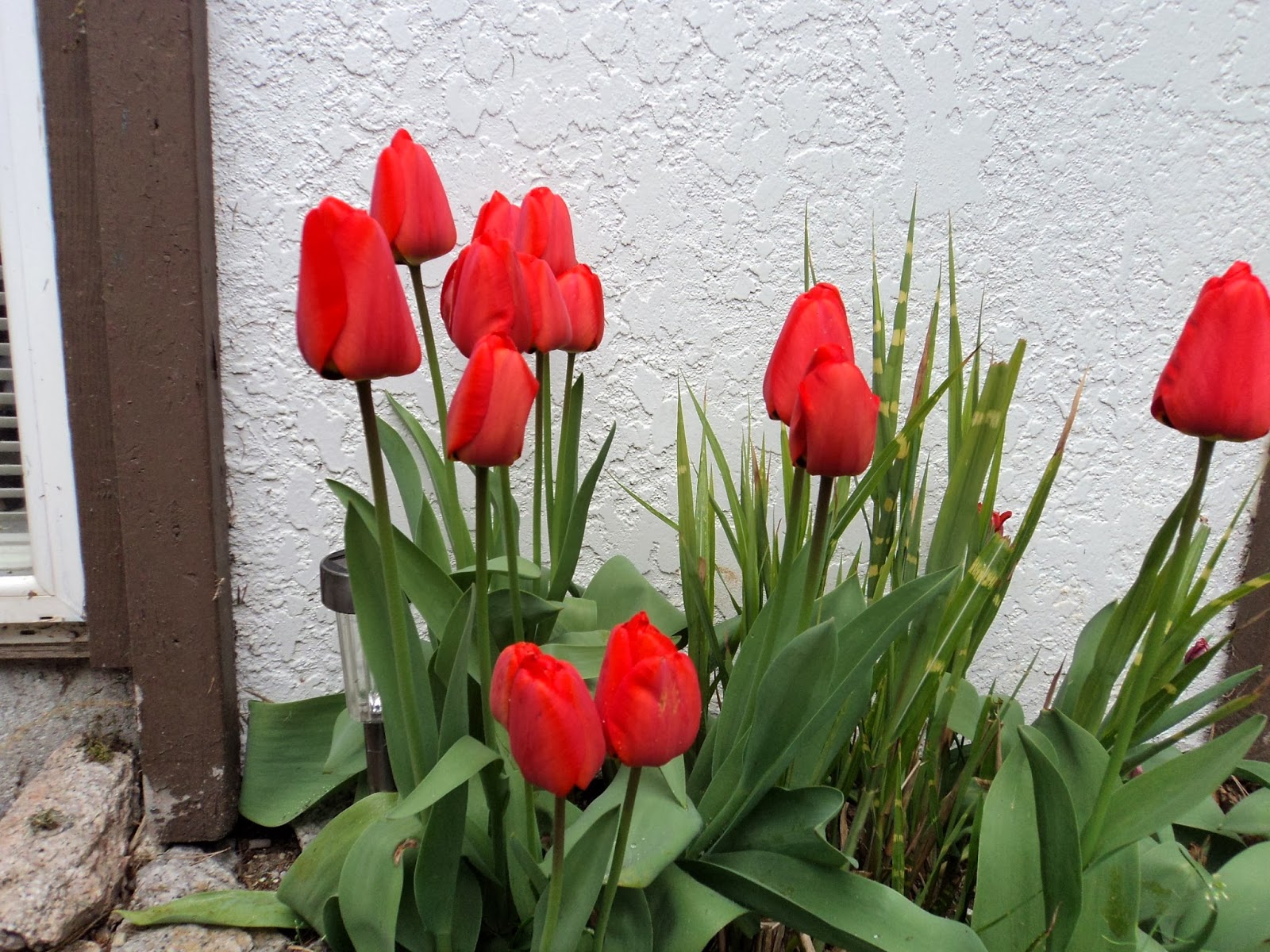 Hyacinth. Next to the wooden retaining wall at the base of the garden. 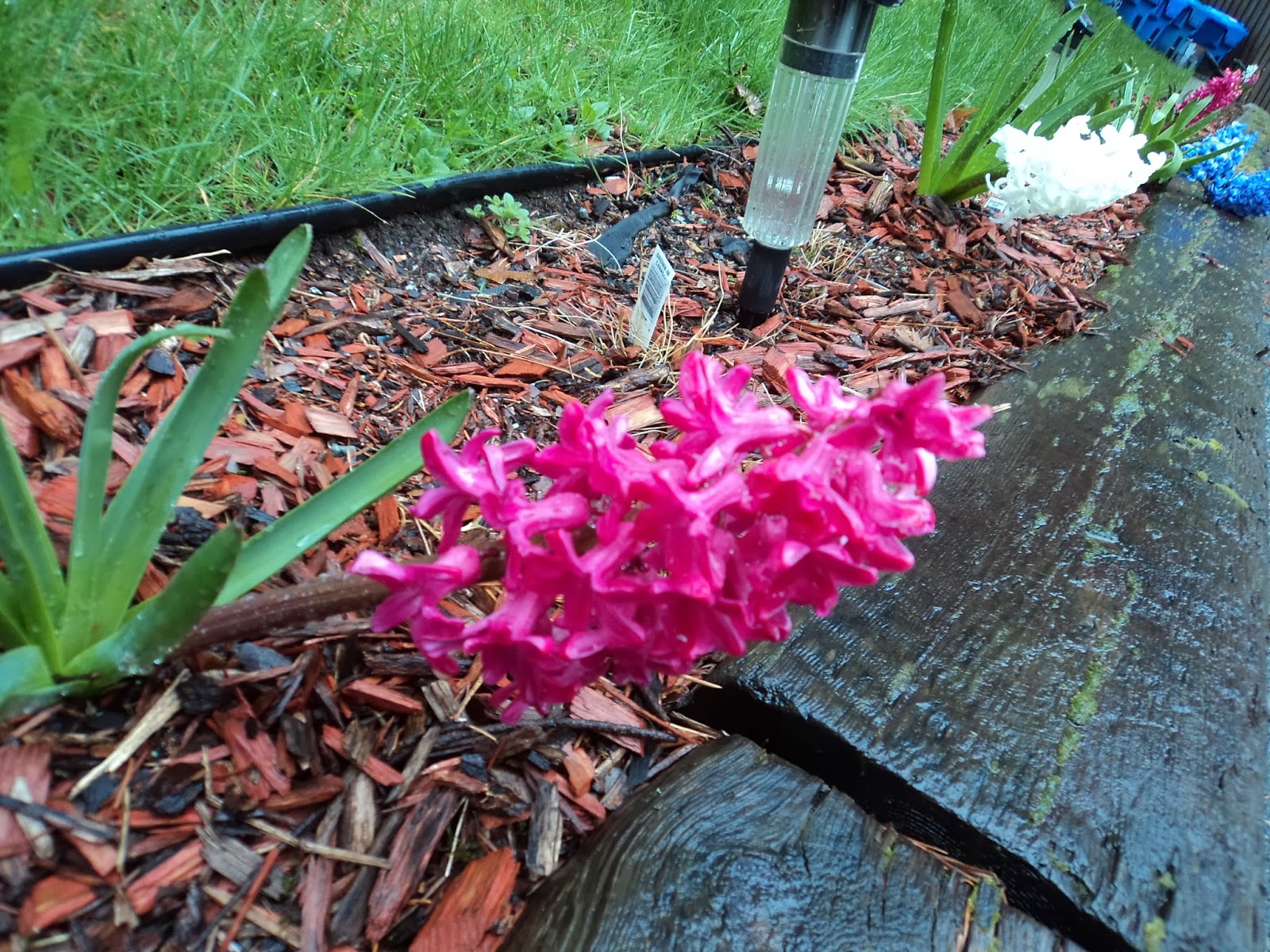 Grape Hyacinth. We got these from Chris's Mom and planted them one year outside of our office window. 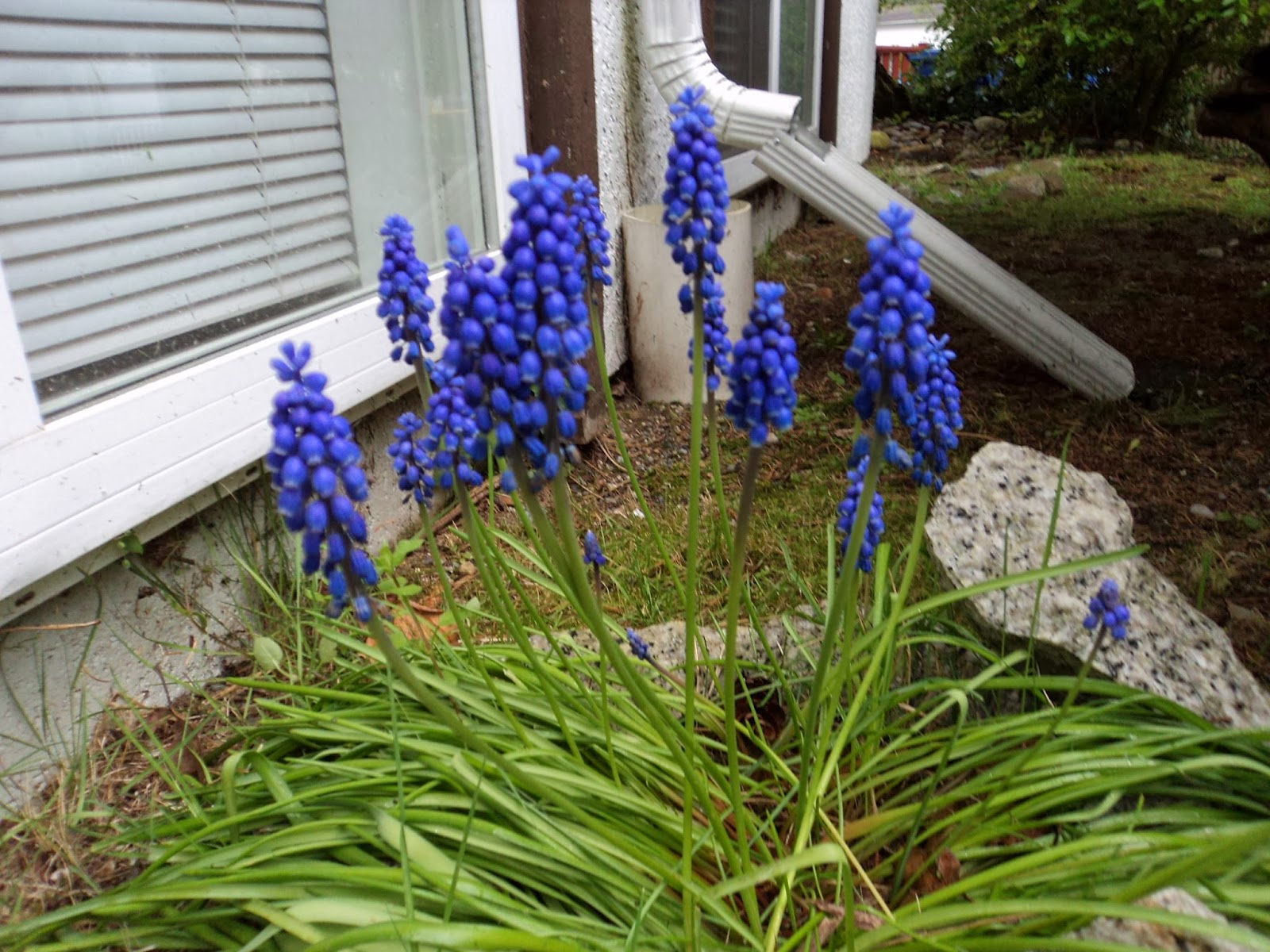 "Stock"....at least I think that is what it is called.  They smell like ....well, I don't really know, but they were under the window one year too and I loved to sit there and smell them as the fragrance came into the living room.....:-) 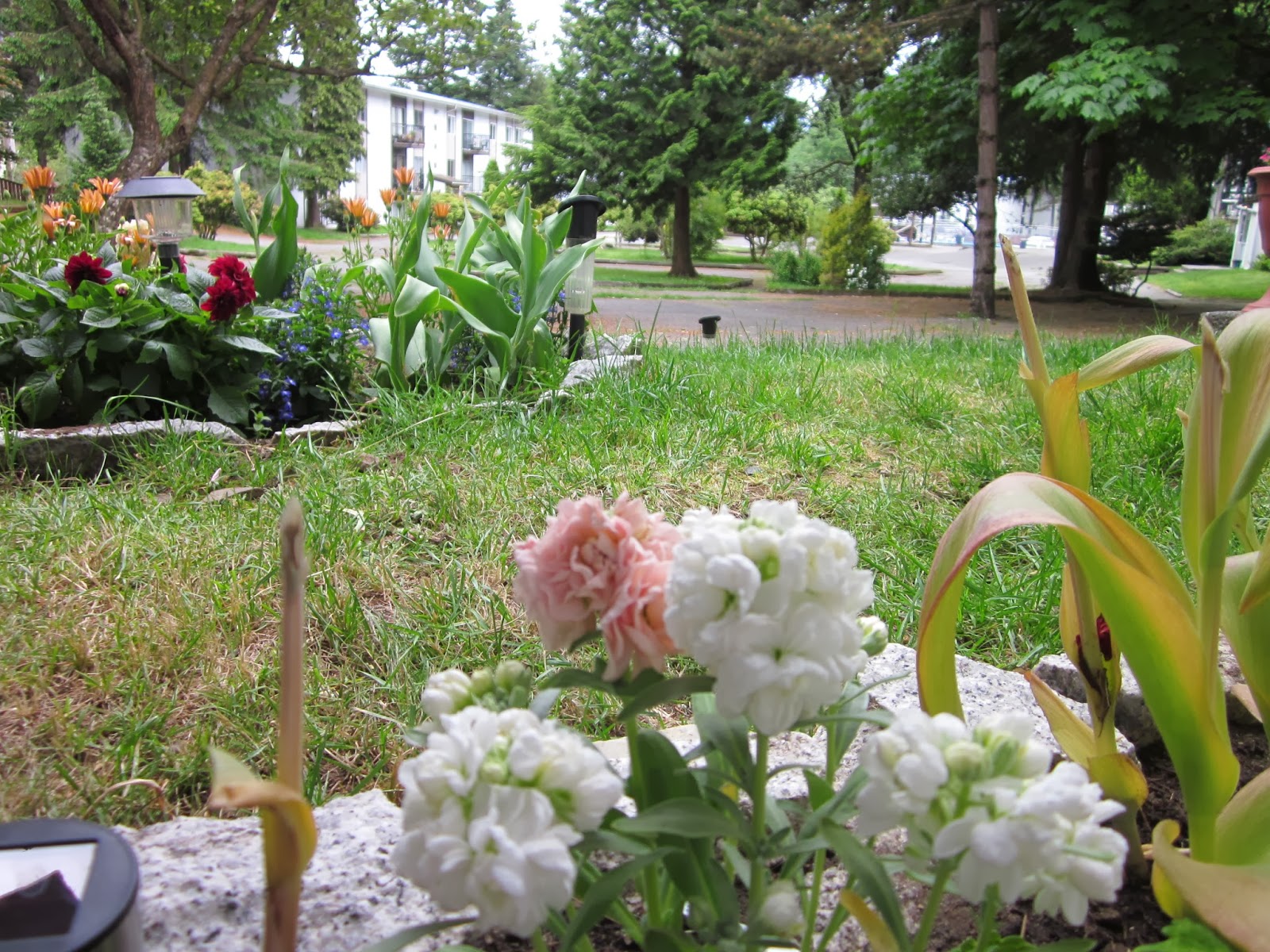 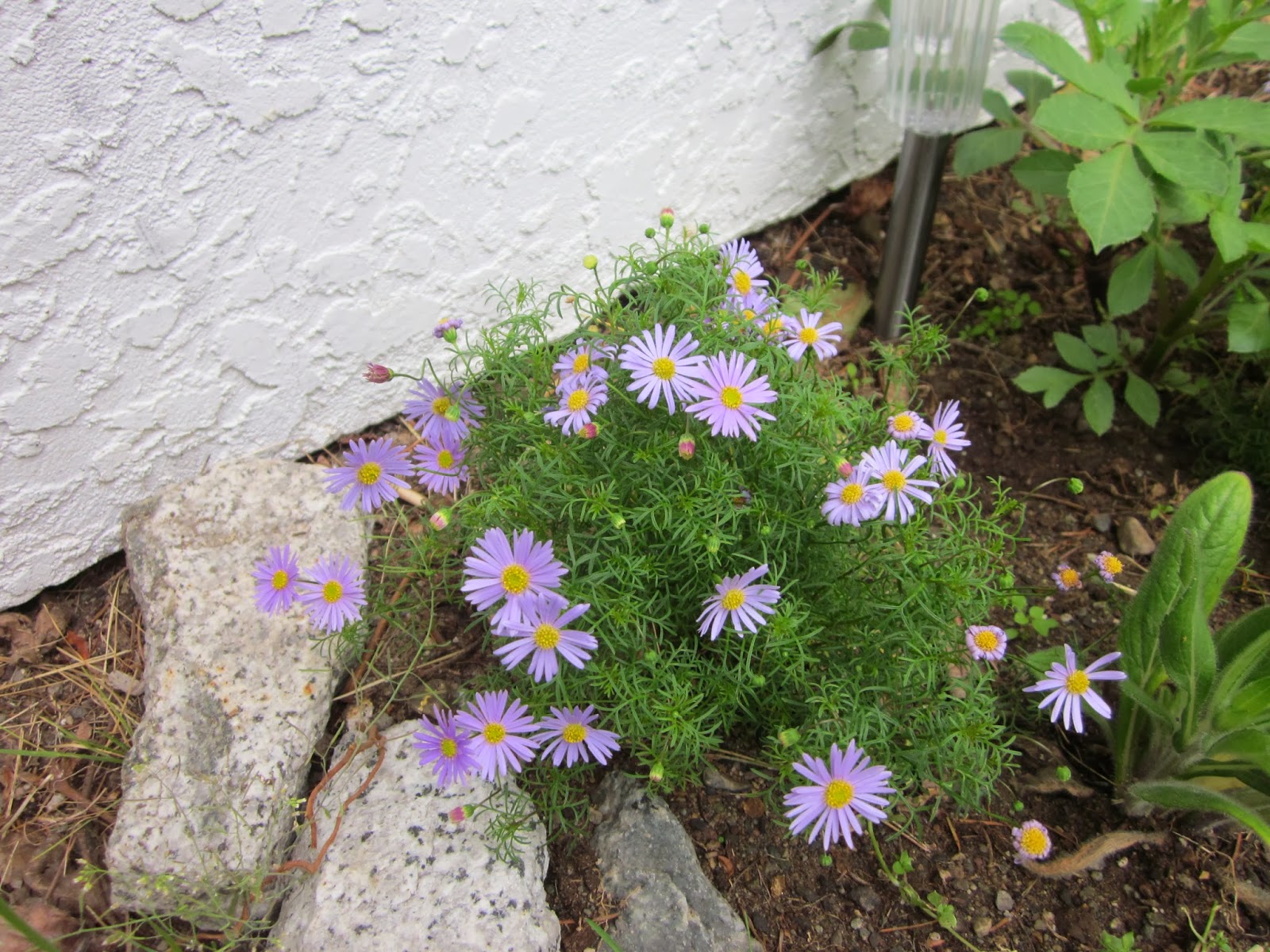 We planted these one year too under the window, but I don't remember what they are called now. 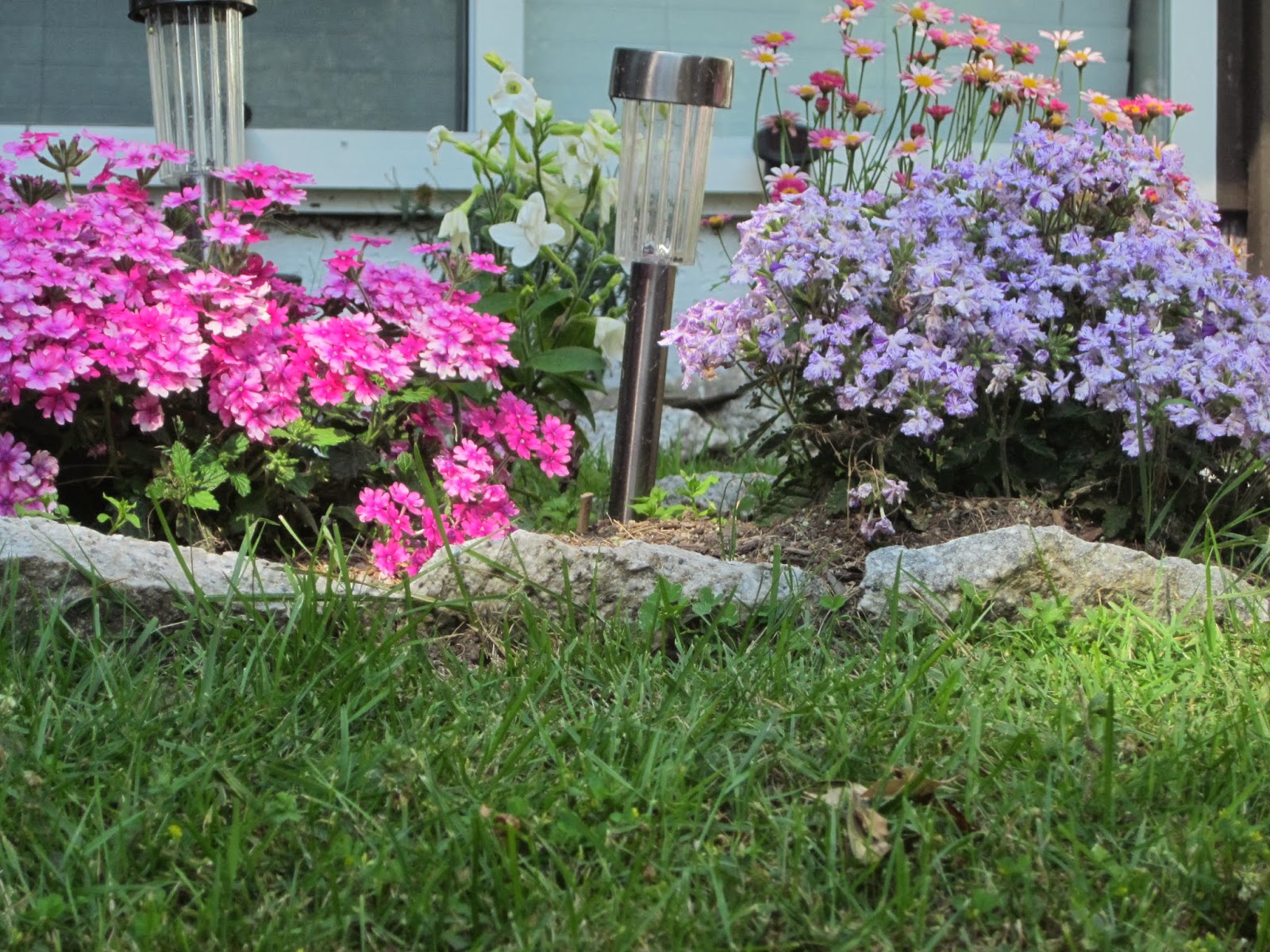 Since when we returned from our last trip the Rhododendron bushes were practically dead from inconsiderate neighbors dogs and cats, we told the contractors that they could dig out the bushes and dispose of them.  They offered to keep them in a ball for us,but since we didn't know what size area we would be left with, we said no.  It didn't take them long to scoop them out. 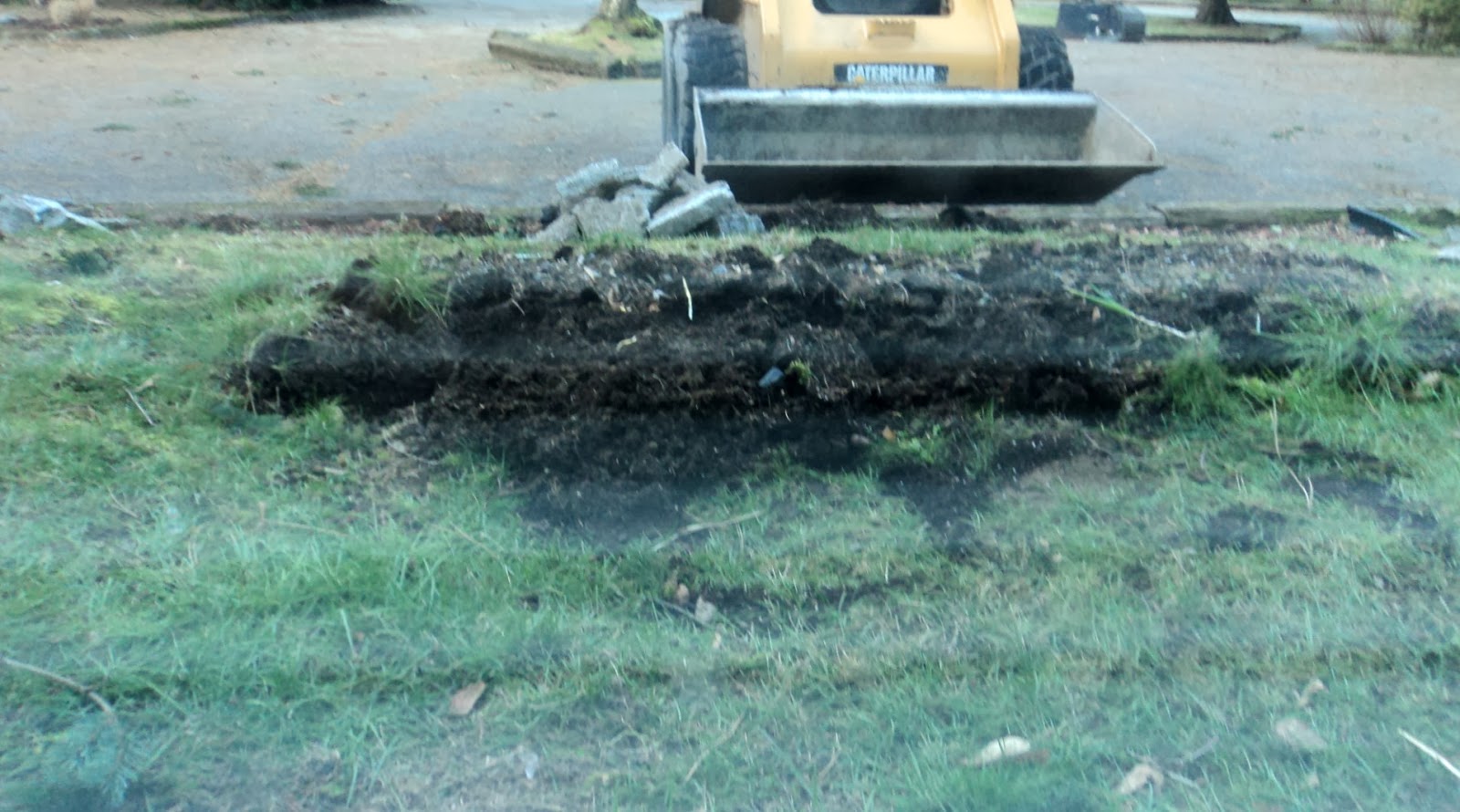 This is the center of the garden one year 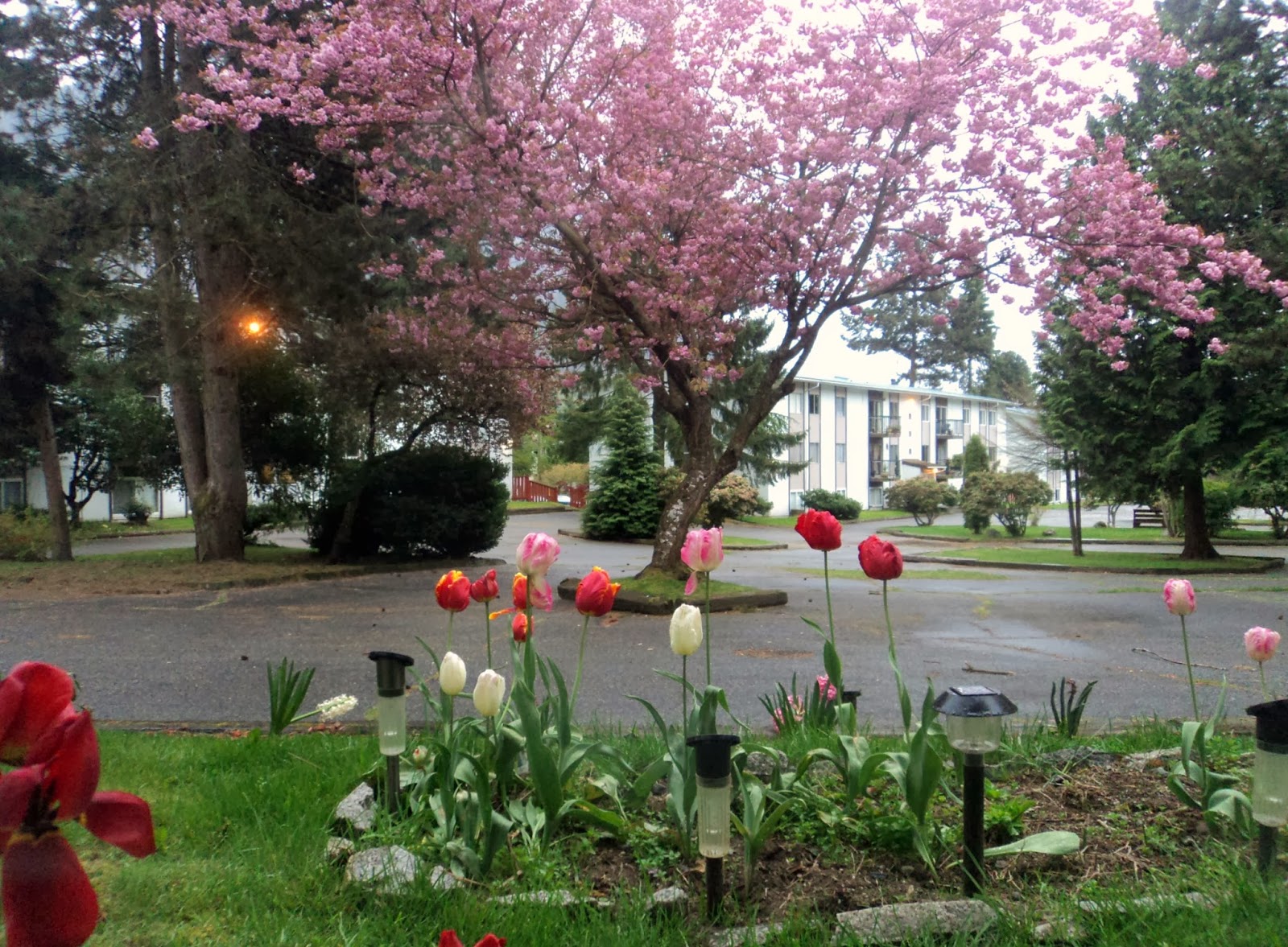 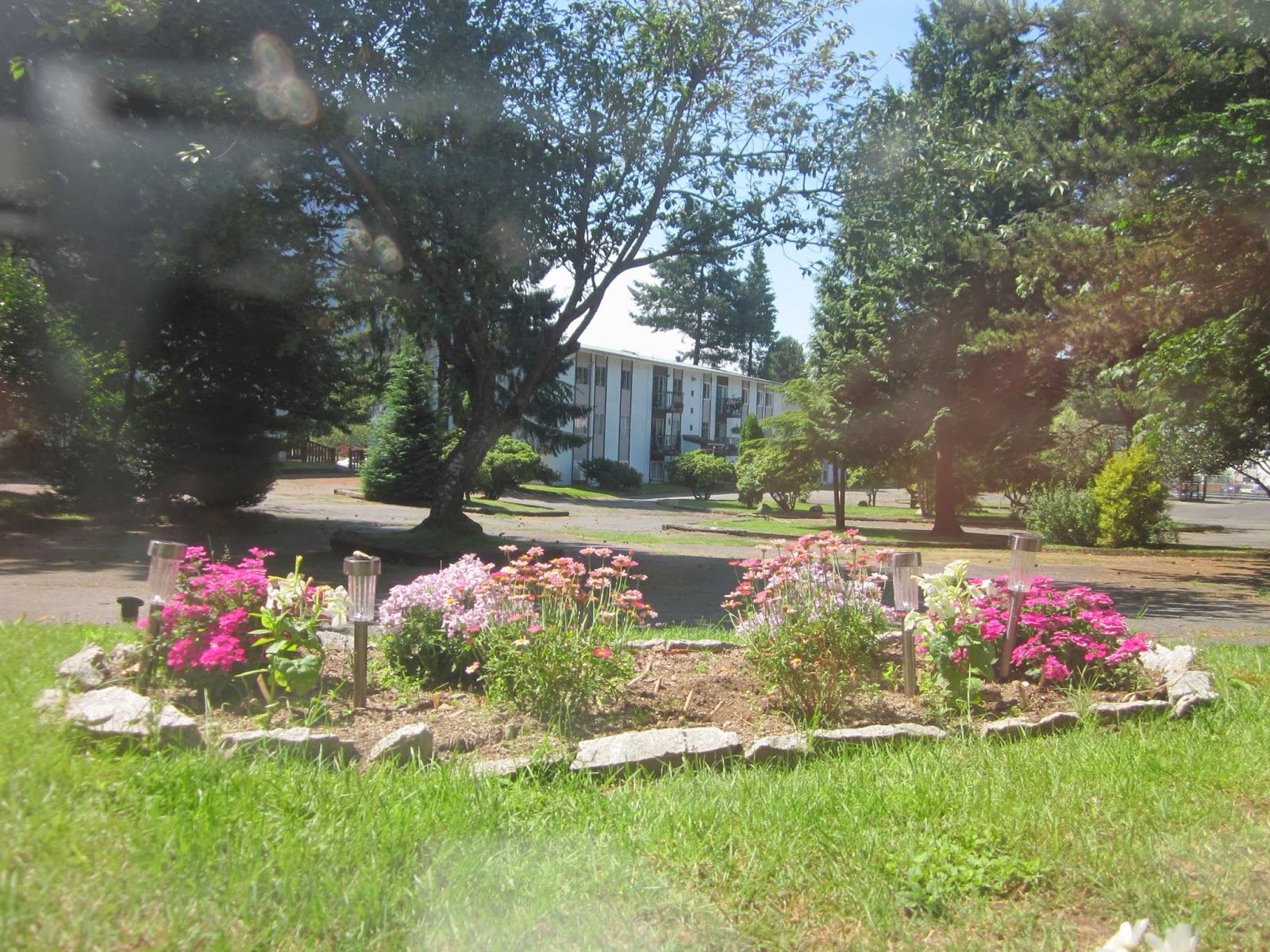 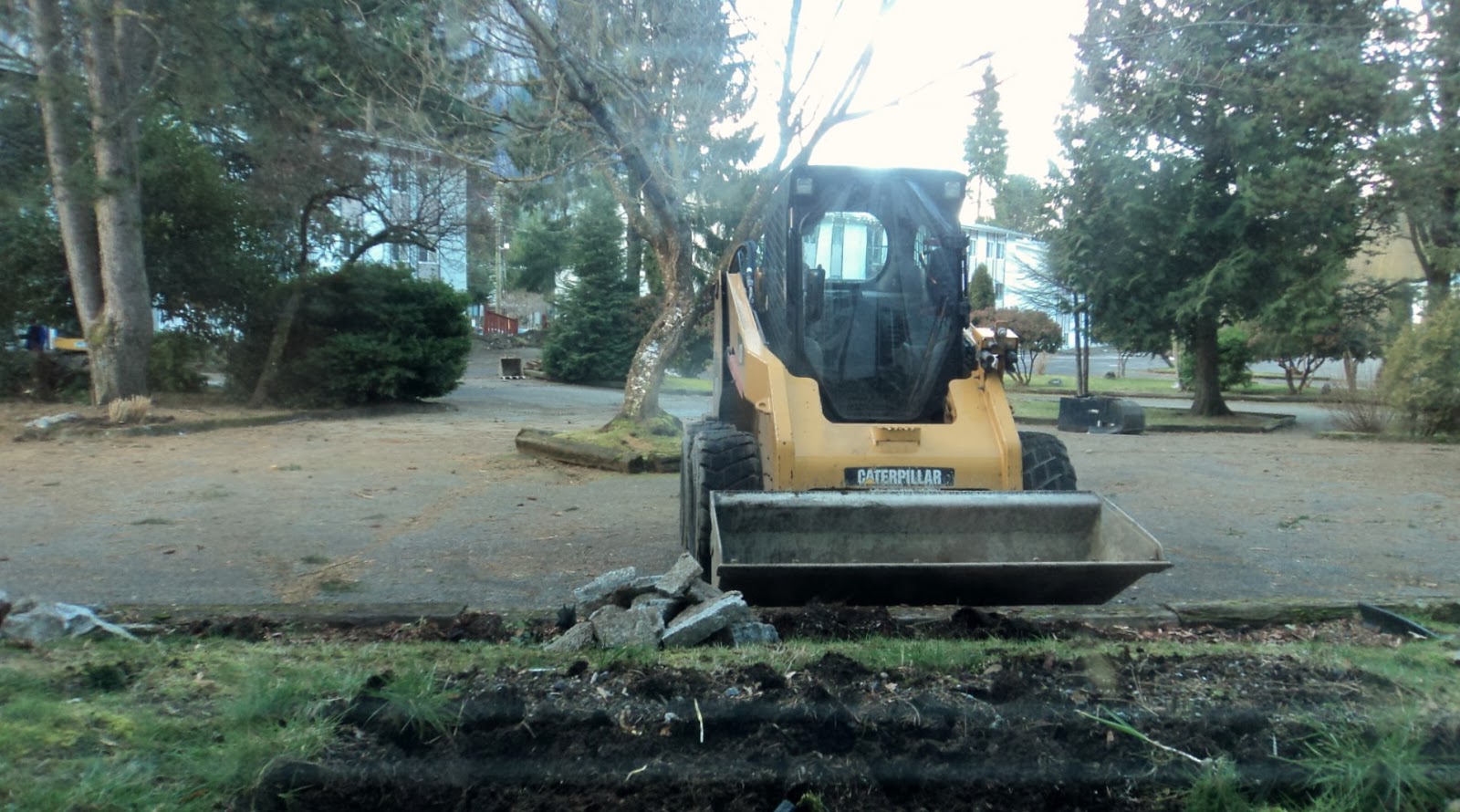 We did manage to get our decorative grasses out and plant them across the courtyard under a tree before they were forever lost.  Good thing they are still dormant. 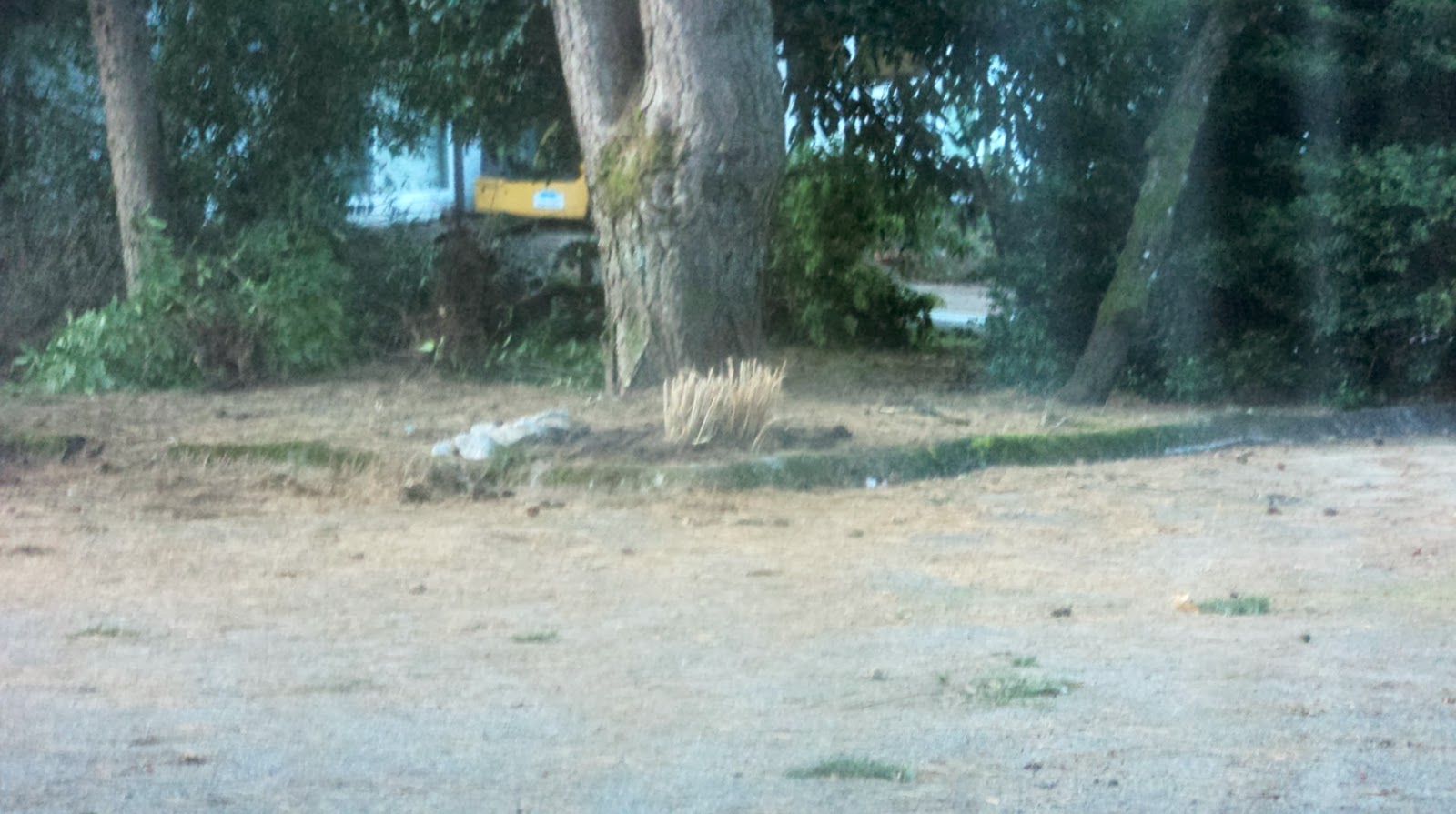 Next thing you know, there was another dump of snow.  It did this off and on for several days.  This picture was one that I took before they ripped the bush out of the ground.  In the background you can see a large pile of granite that was part of a larger pile we used to make borders in the garden area.  These are the pots we put the plants in. 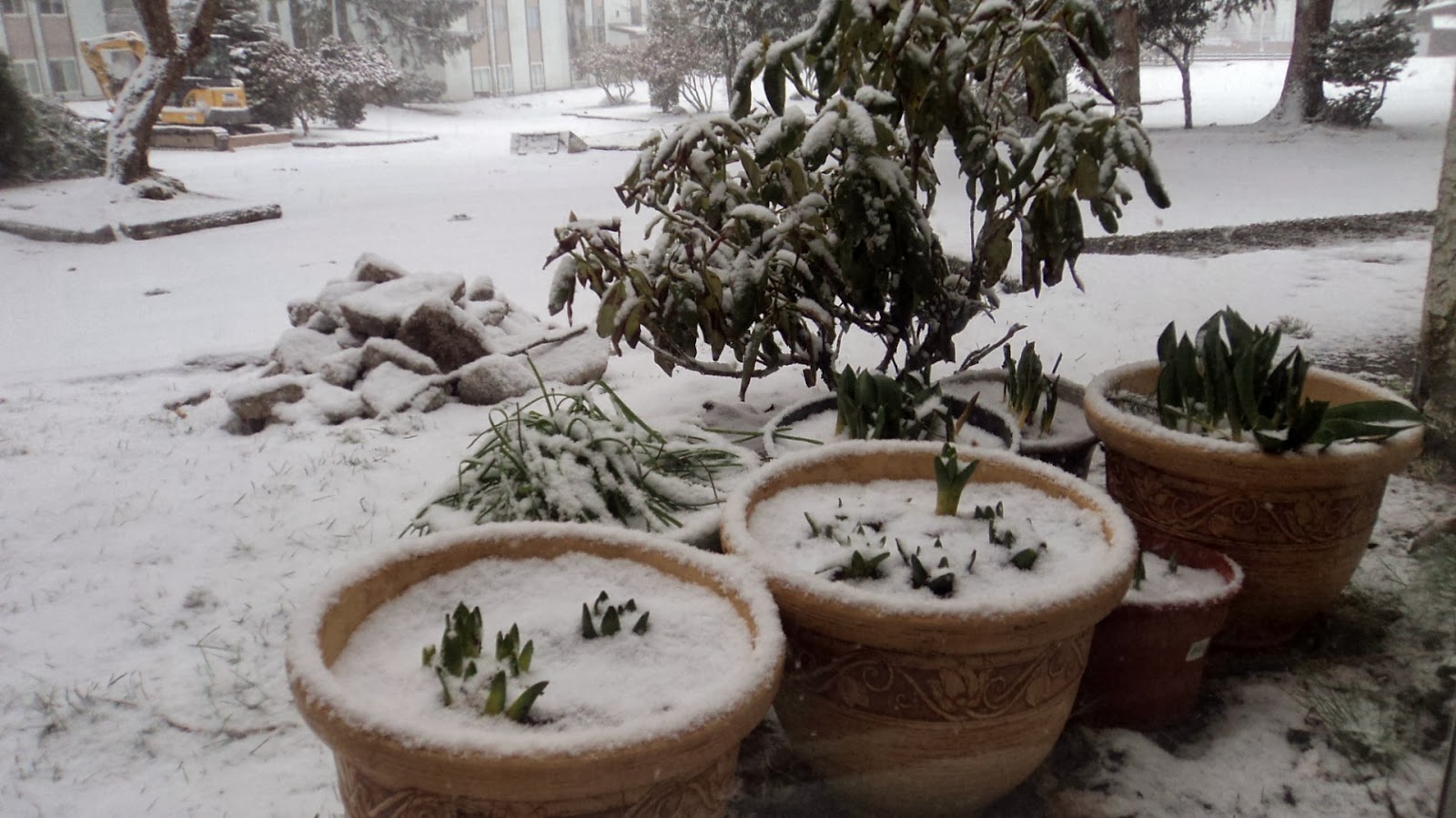 They had more than one crew working around the buildings.  The remediation called for some of the older trees to be cut down.  Some people lost a great deal of shade as a result of it. 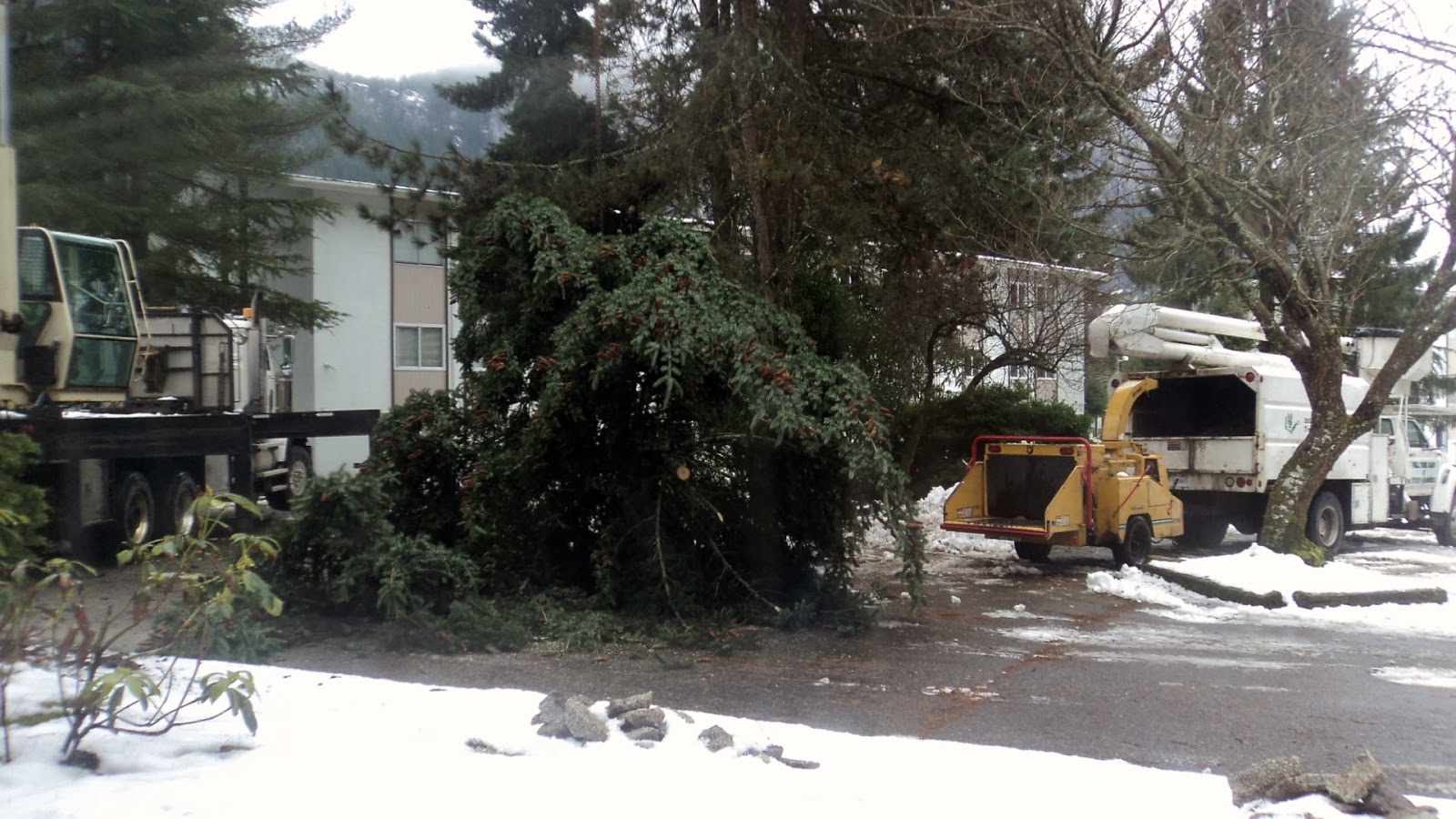 I was amazed at how tall the tree actually was and how much lumber could come from it although I was sad to see it go....:-(. This was one tree, so you can imagine how tall it really was.  I love shade trees.  Especially coming from a climate where nothing survives the harsh summers except ......me! 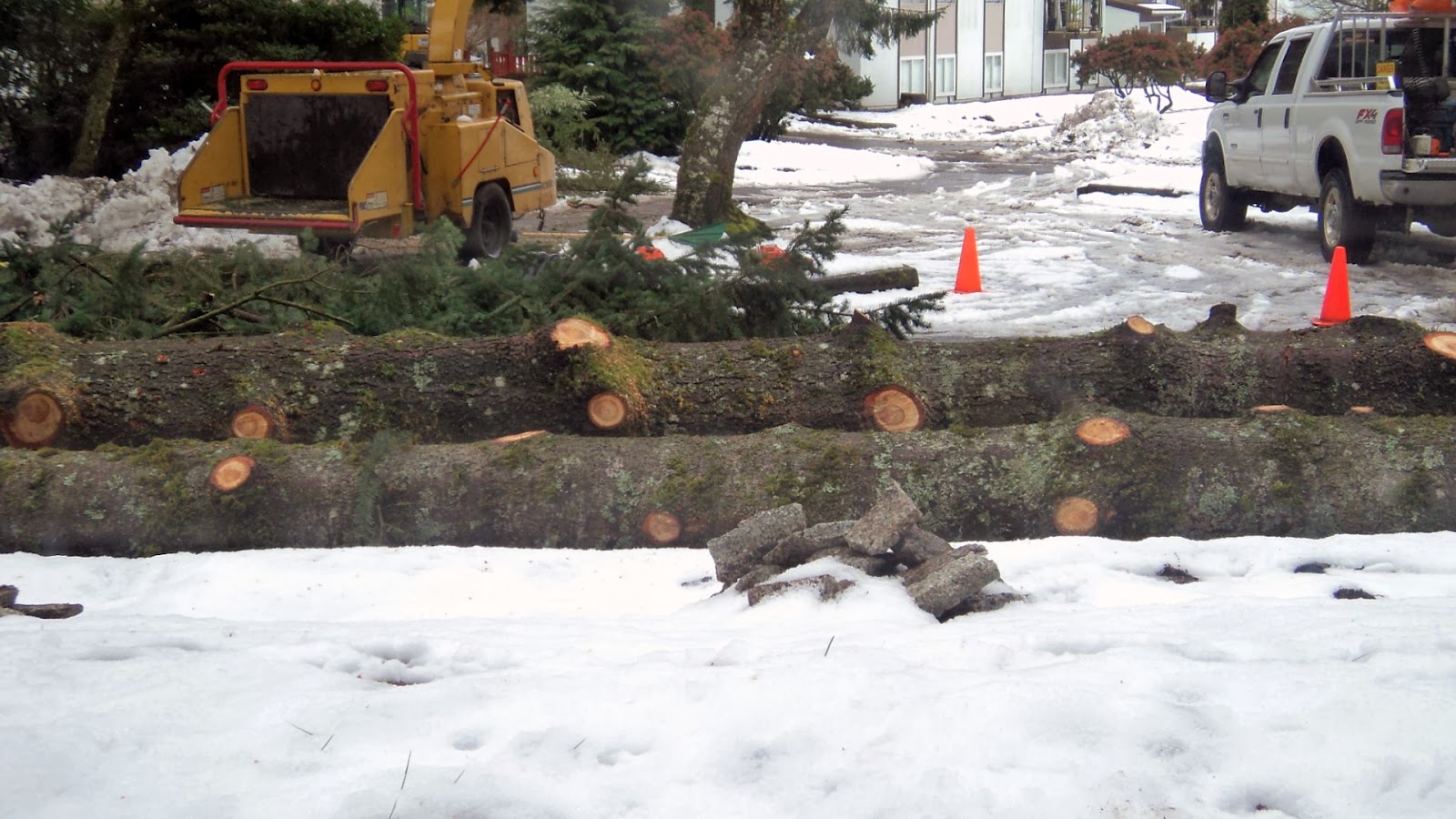 The process seemed to drag on forever...it took days to do this stuff.  Now, the wooden retaining wall that was at the base of the garden is gone..... 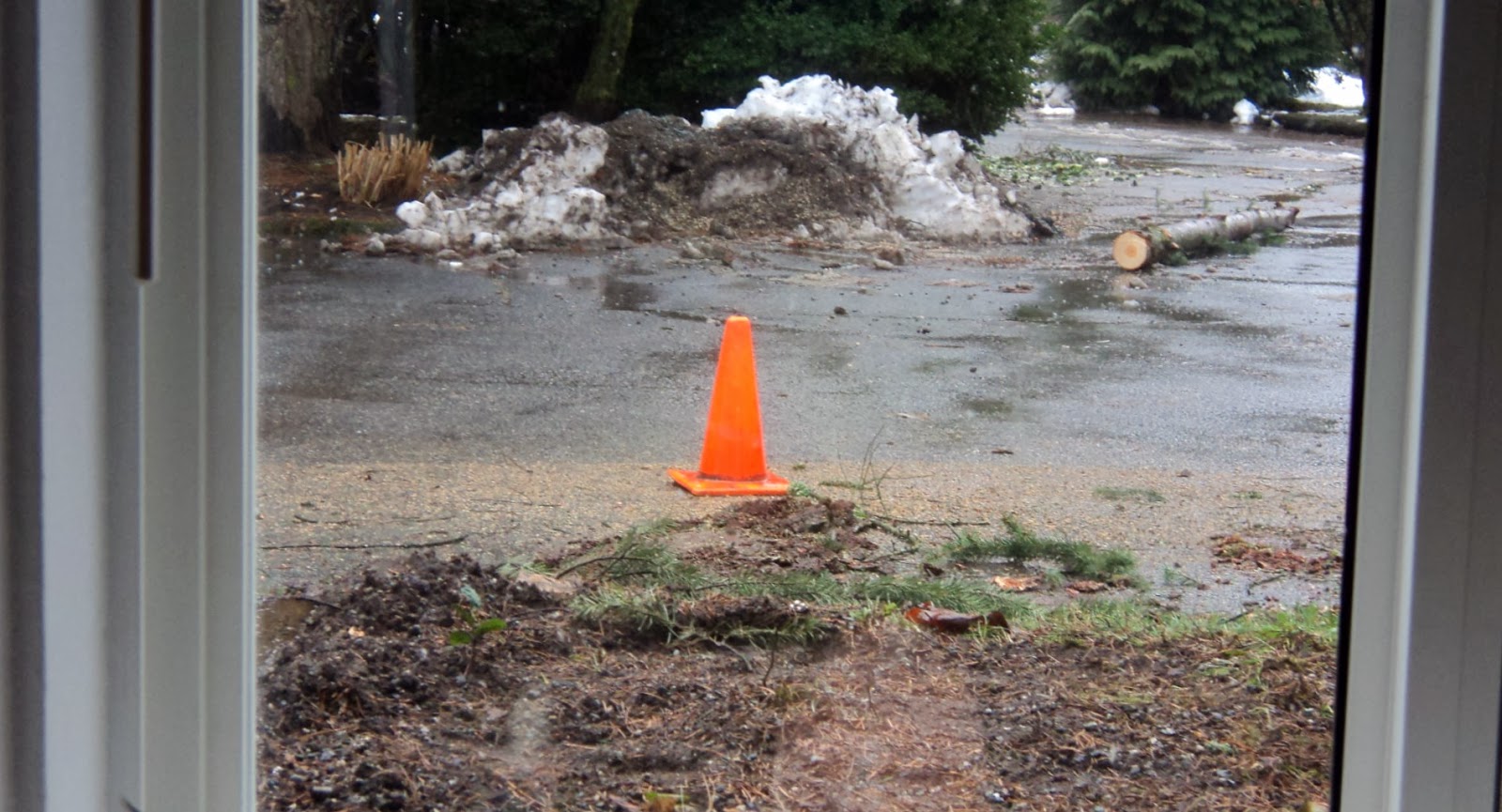 Things are getting serious now!  They are scooping all of the dirt out..... 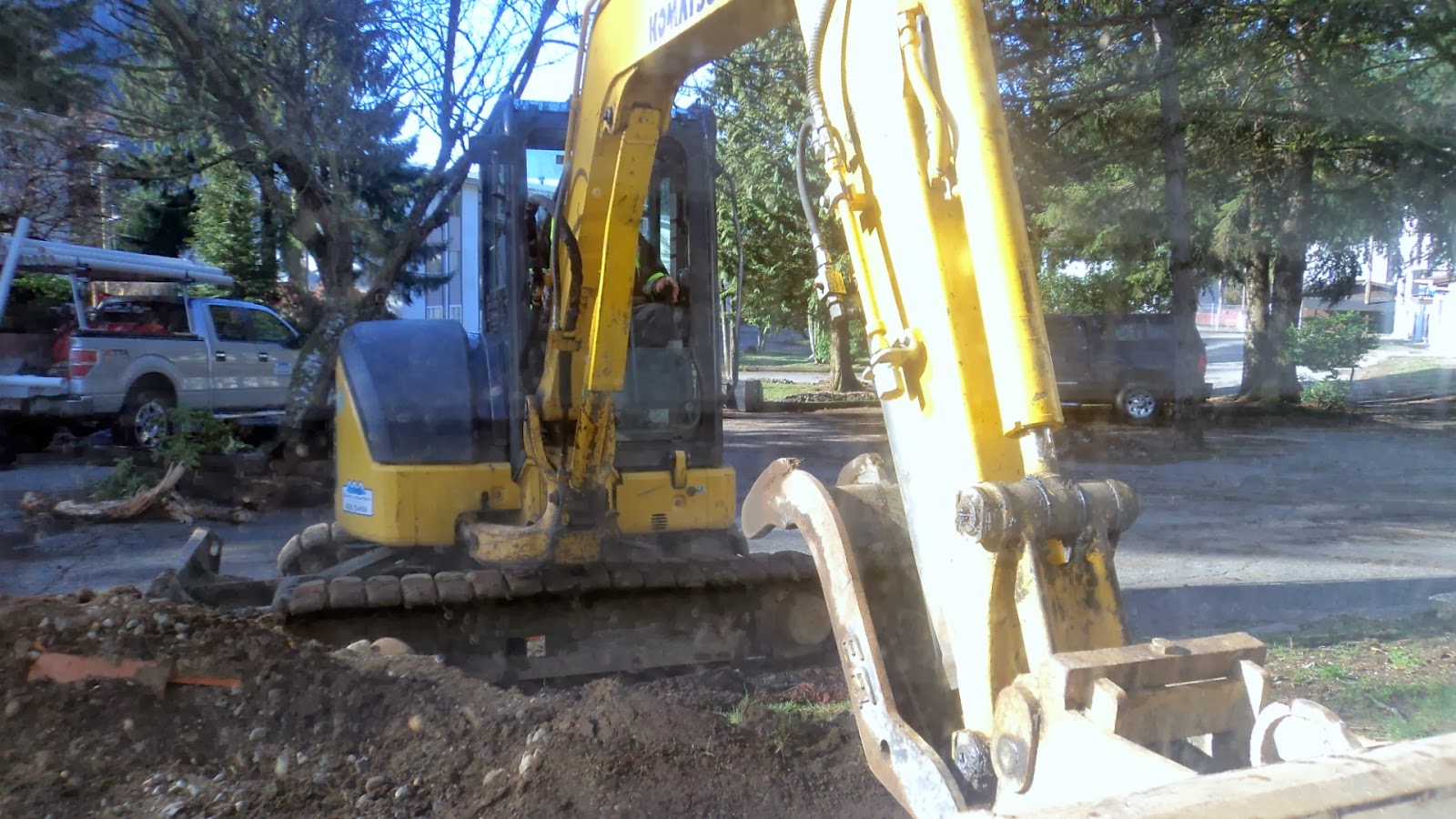 Yikes!!  For a moment I thought he was going to break our window.  He came very close to it and dug a trench.  I guess the guy has "mad skills"! 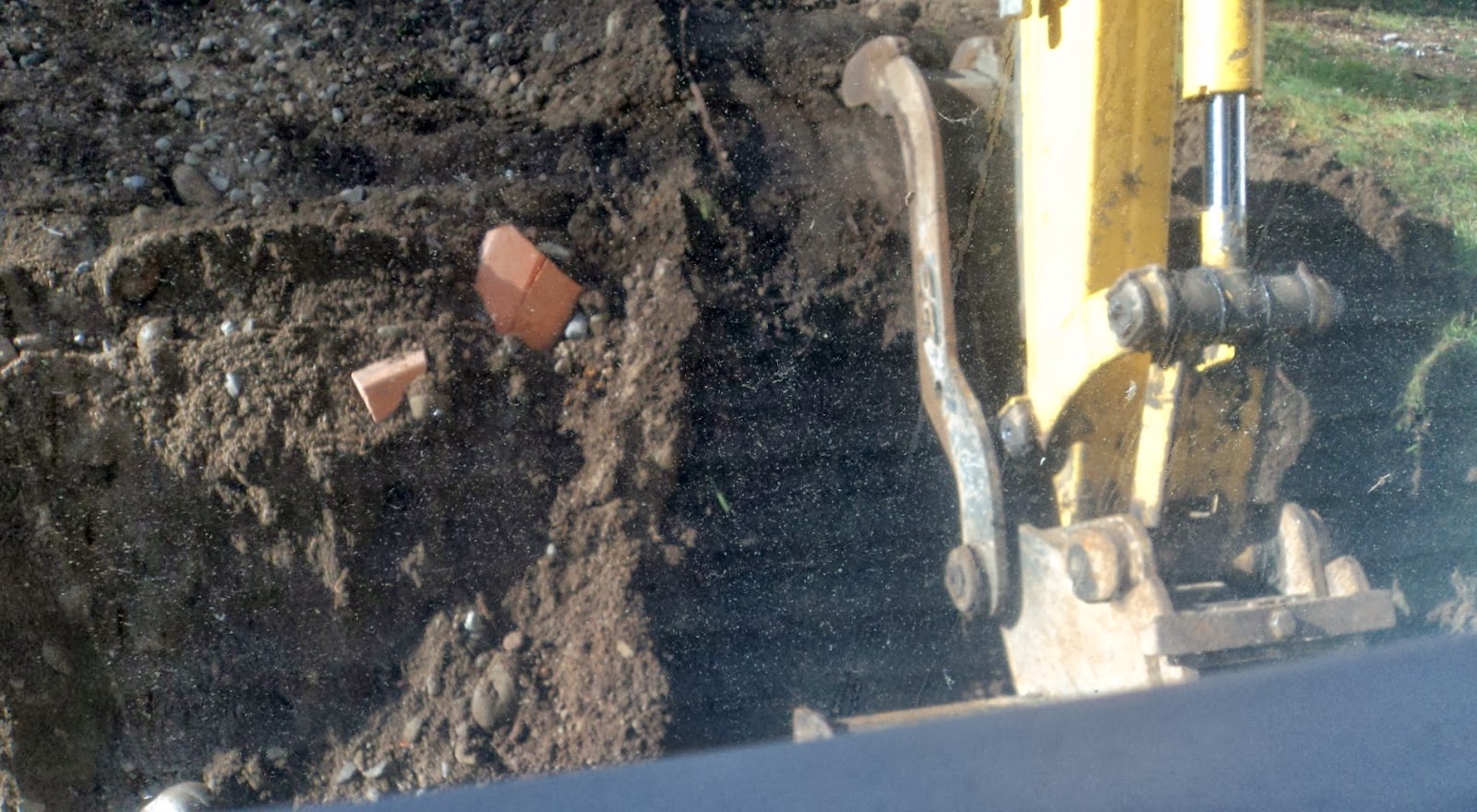 And after it was all said and done...we were left with no planting area under the window.... 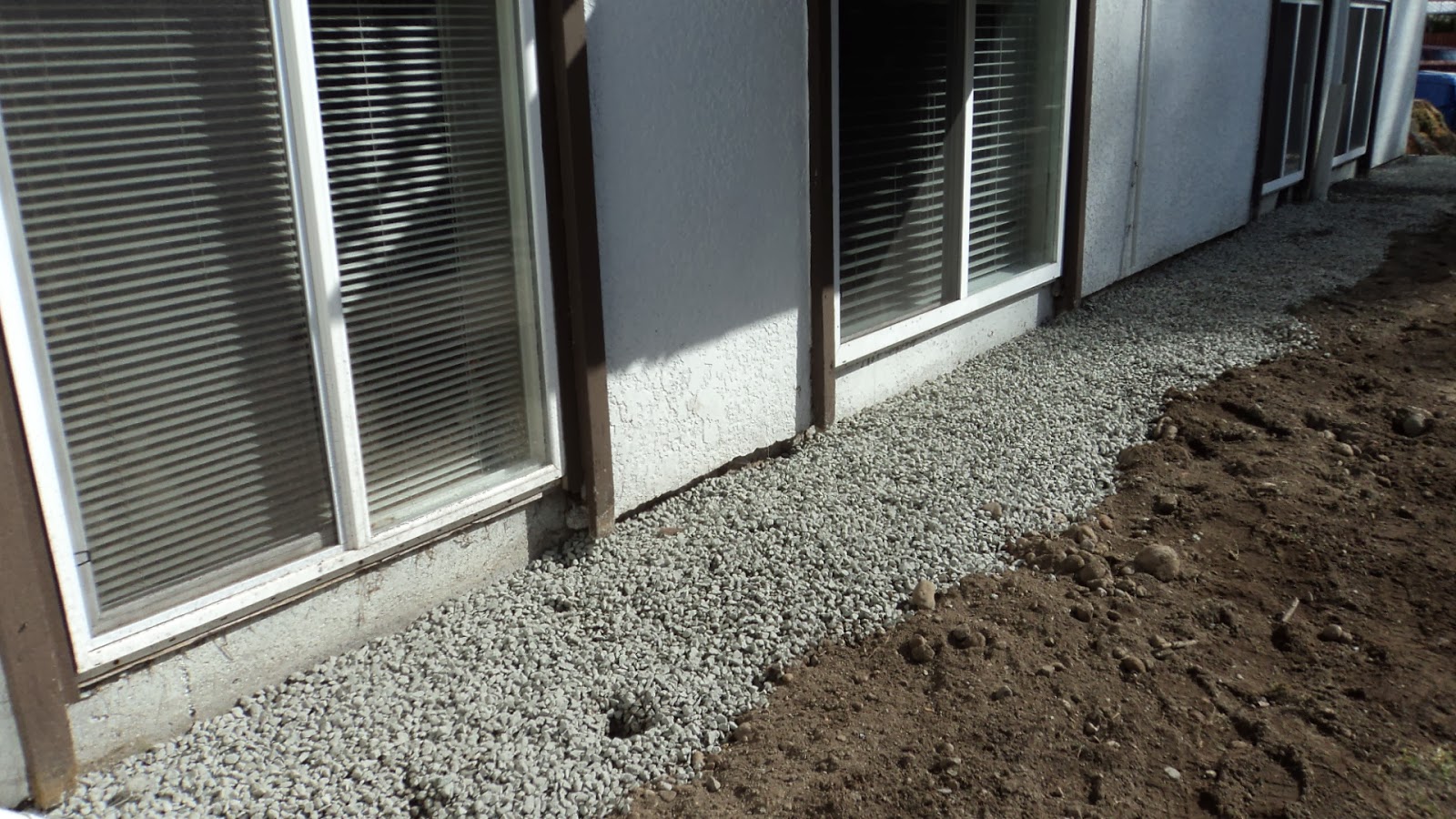 All the bushes and shade trees outside of the office window were gone as well.... 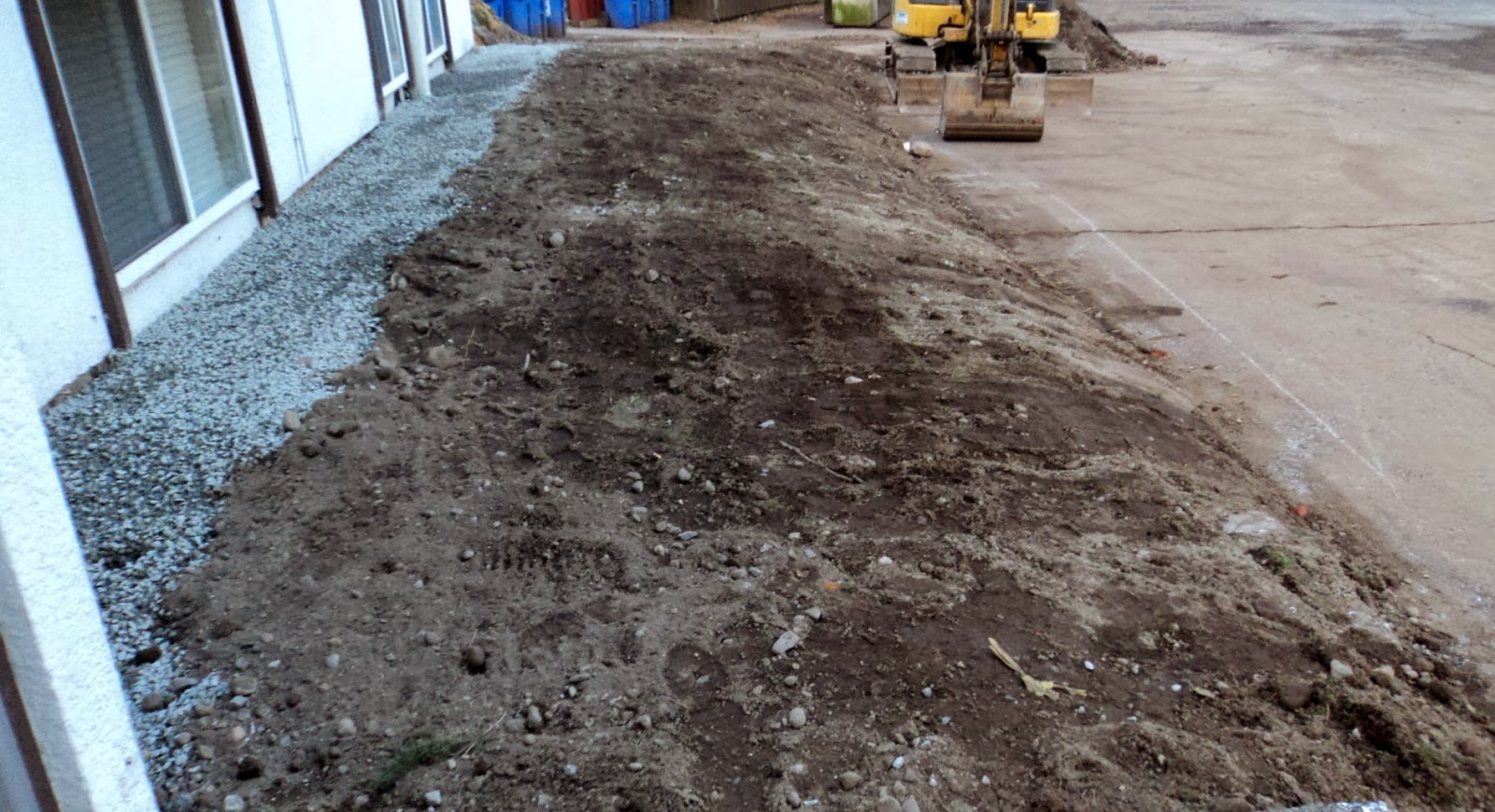 It reminds me of a post war situation.....:-(.  Fortunately, we have also been told that landscapers will be coming to finish up and put down some grass seeds.  We haven't decided if we are going to replant or just leave them in pots.  But for now, here is what we salvaged, starting to wake up for the Spring. 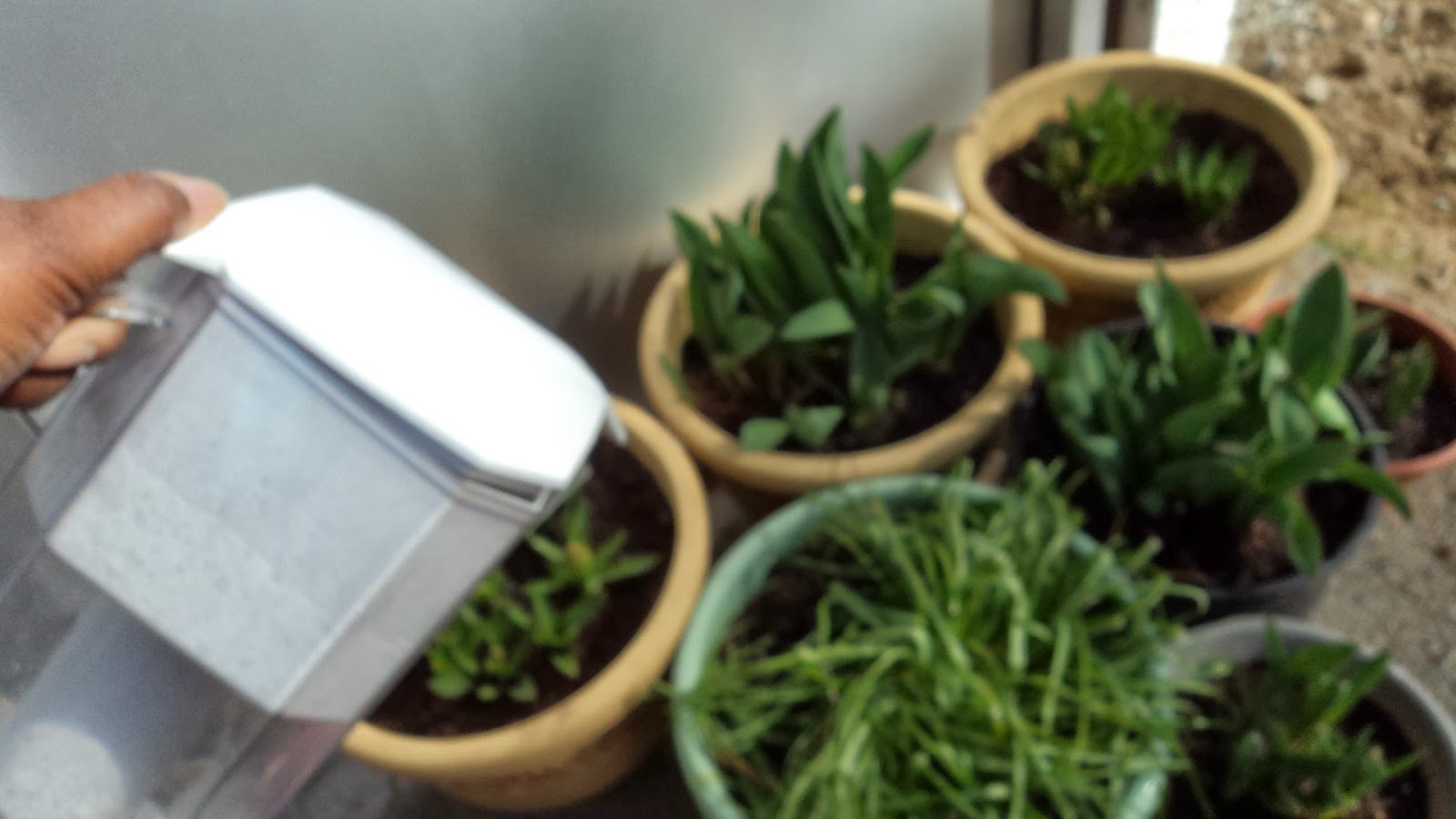 We will probably keep them here until we see what the landscapers are going to do.  But it is likely that they will remain in pots and hopefully endure storage while we are away in the United States this fall.