It has been almost two weeks since Ms Vickey had been on the road. Since today was very pleasant and in the 70's, it seemed like a good idea to get out on the open road before winter really set in on us. 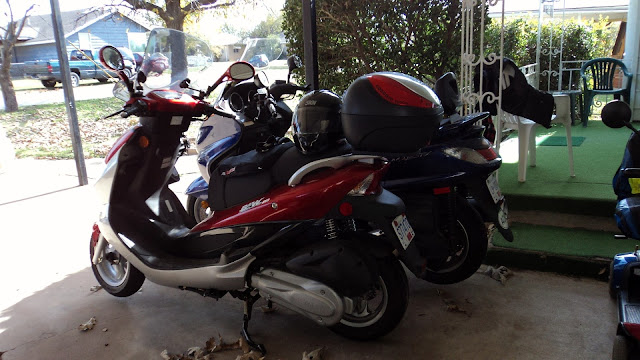 But first things first.....off to the court house to pay the property taxes for the year.  Since we paid our Oklahoma home off last year, this would be the first time taxes were paid by me and not an escrow account.   Ouch!!  I looked at the itemization that was on the bill and all I could say was "why am I PAYING FOR THAT!?"  I thought the taxes were for "my" property; not everything one elses too.....:-(.

The good thing is that Scootard was still able to transact business on his cell phone on the way out of the building.   I was still stinging from the large tax bill, but at least it was paid in full for the year........yikes!

We started down the highway and the further I went, the more aware I became that I was not feeling well at all.......my throat was hurting and my sinuses were itchy.....:-(. 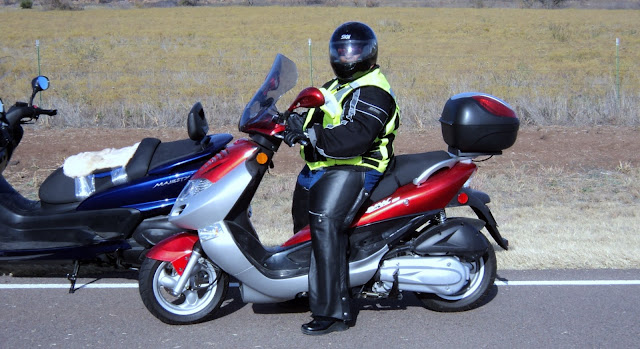 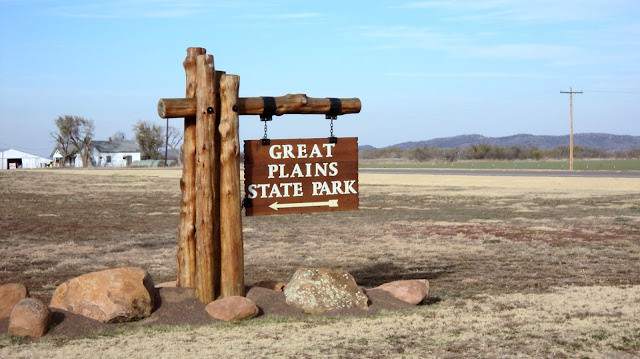 There wasn't one single soul at the park.  It was completely deserted with the exception of some water foul that I was too far away from to get a picture of. But it was beautiful and quiet... ﻿ 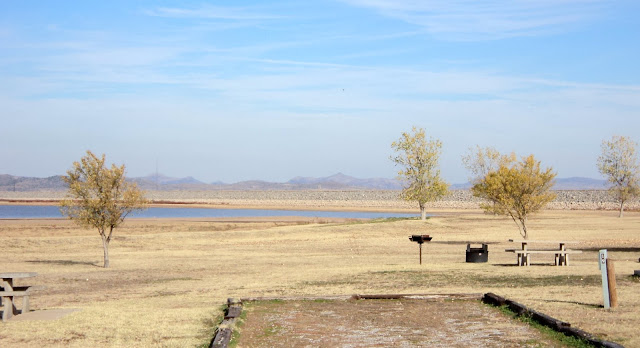 Now, whenever I go on rides like this, I always have to go to the bathroom.  And as bad as I had to go, how is it that I drove right past it!?  haha....oh no!  I didn't feel confident to turn the bike around where I was as there were slight drop off's on either side of the road.  So, I decided to take the long way back around.  Scootard met me when I got half way there and came to my rescue.  We met where the drop off's were "not".....ha 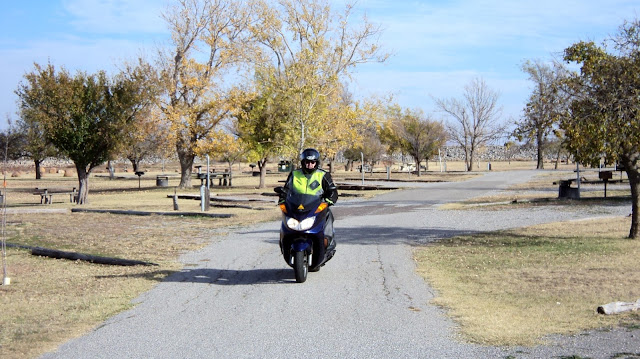 I was in desparate need of a rest since I was not feeling well at all..... 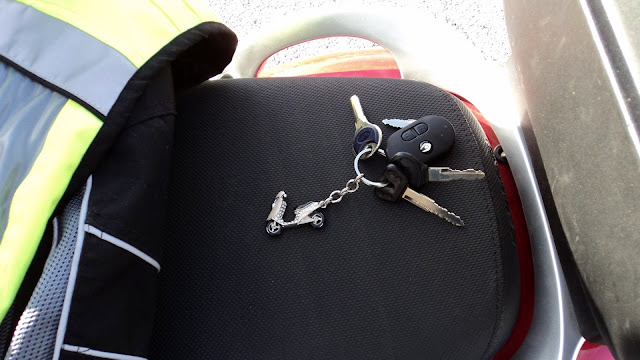 Wow, that was too close for comfort! 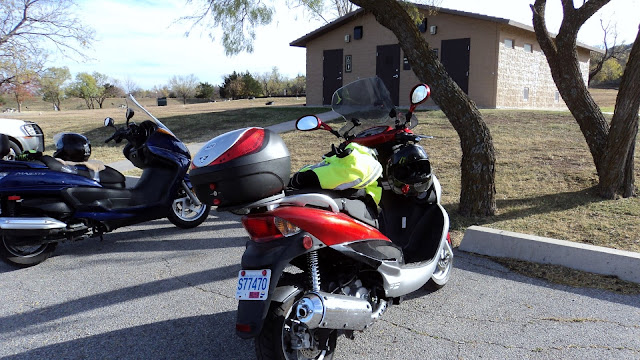 I came out of the bathroom to discover that Scootard was practicing being the master of his universe.....hahaha. 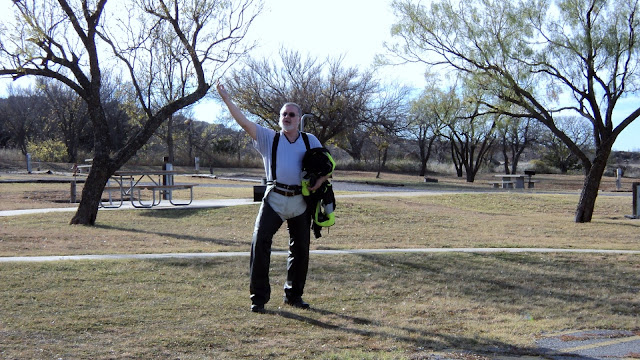 Next stop was to the Tom Sneed Dam.  I came here many years ago, but now it was different.  911 had taken place and the Dam was now gated off.  Scootard was taking pictures while I stood there in disbelief.... 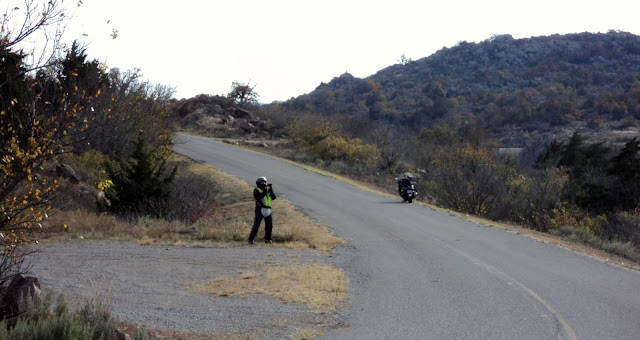 I decided to take other area pictures. 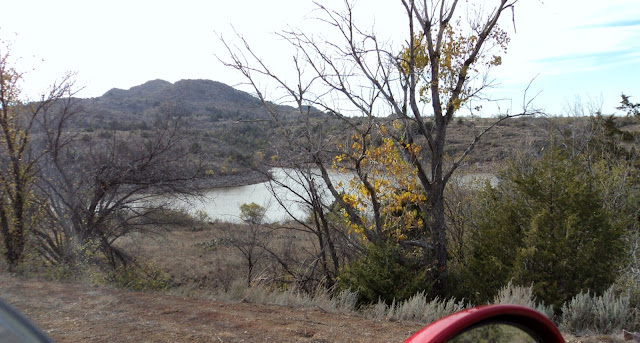 I don't know if these are prickly pear or not.  I didn't see the red flower that would normally be on top of that kind of cactus.  Perhaps the flower had faded already?  I'm not sure.... 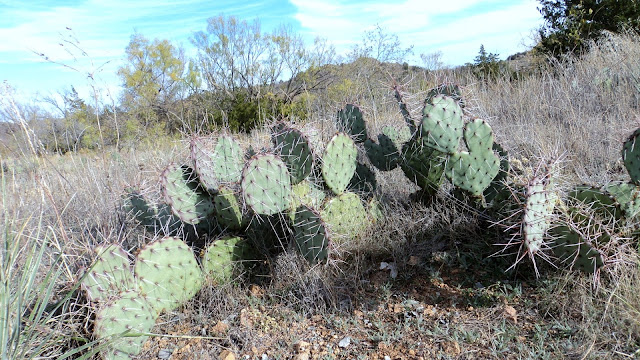 Scootard drove across some loose gravel to get pictures of the dam.  I was not going to do that, so I waited for him to come back. 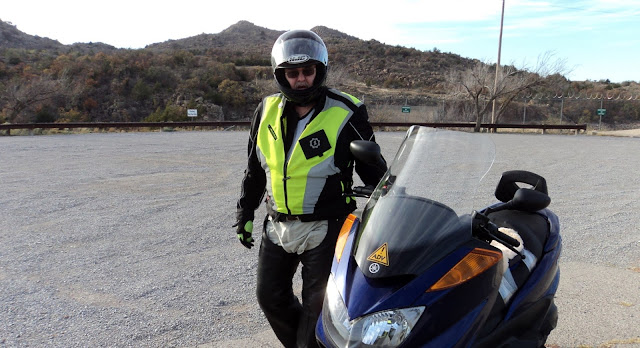 He wanted to get a shot of me "in action" as he calls it.  Not sure it was a good one as I was moving pretty fast when he took the shot.  Oh well. ha 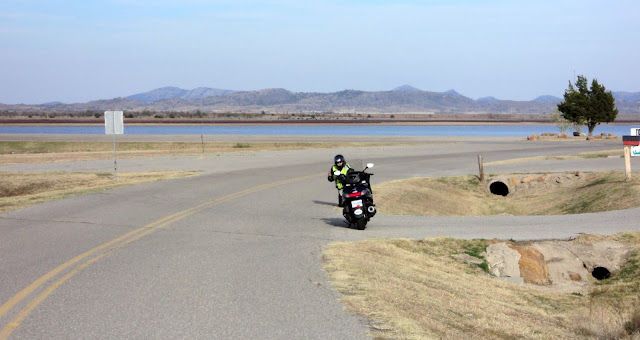 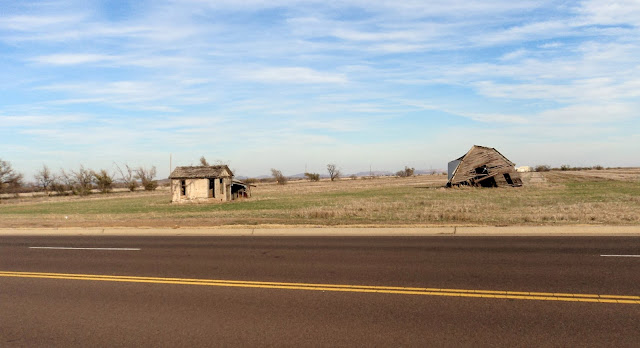 I couldn't help but think that someone used to live here.  Or maybe it was just for the "help" who would come to work the fields many moons ago.  I was somewhat surprised that the county has not made the owners knock it down.  I mean, they would only have to do half the work now anyway! 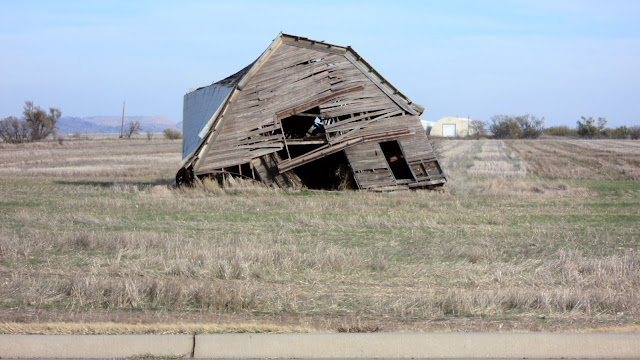 The road was calling me. And I was feeling increasingly sick like I had the flu or something..... 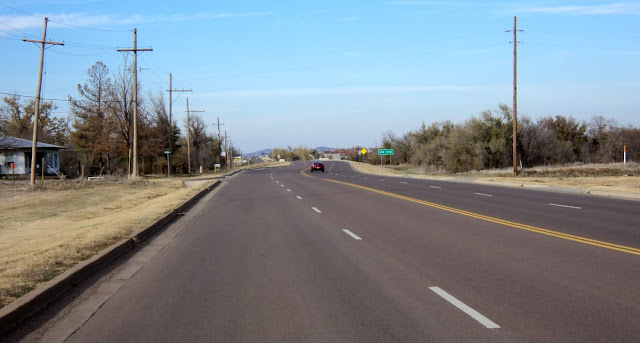 When we got into the town of Snyder, we found it sleepy and pretty much deserted.  I did find this old pressing machine interesting, though......:-). 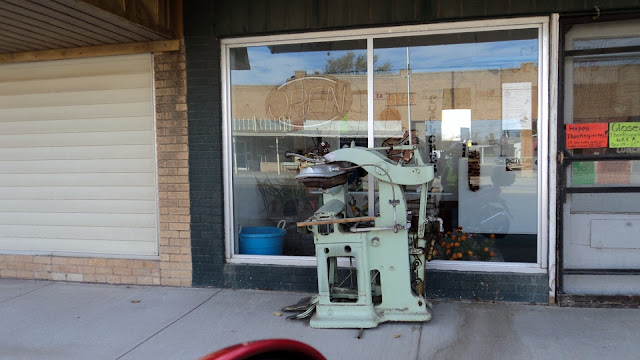 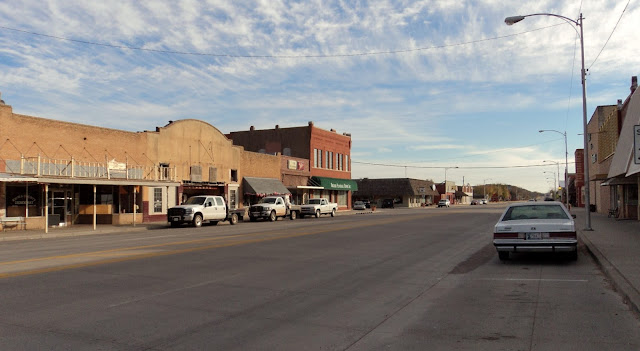 I guess this is the name of their team?  I have no clue... 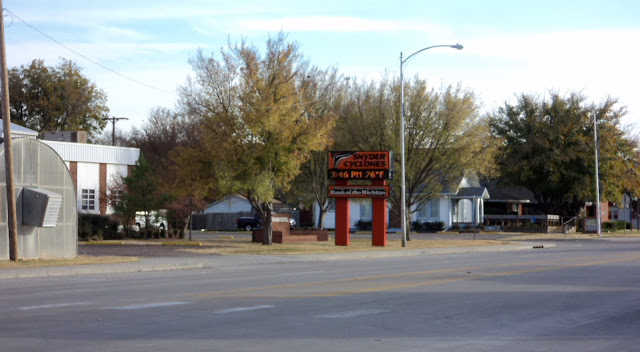 After what seemed like forever, we finally made it back to our city and were on the hunt for dinner.  I was starving and in need of medicine. 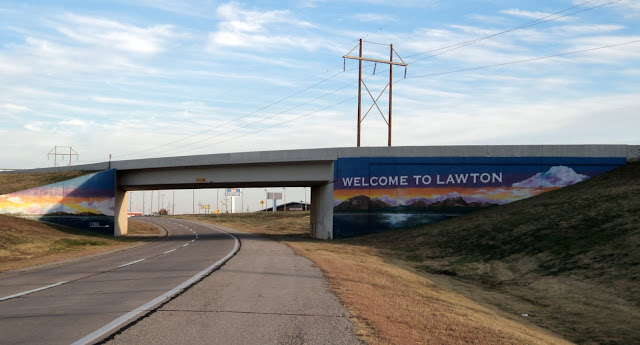 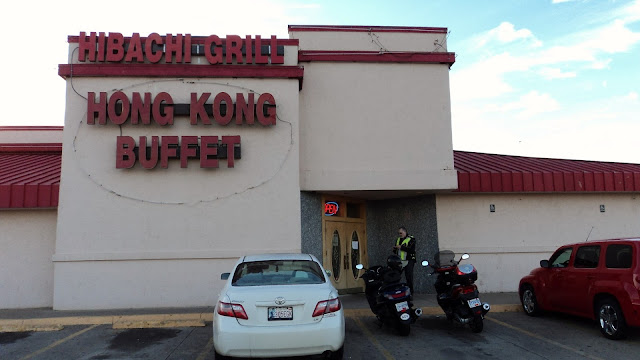 Scootard was in great anticipation of what was beyond those doors......:-). 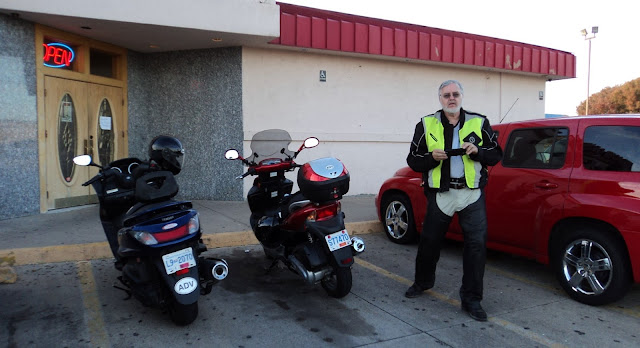 I was exhausted and starving.  I loaded up my plate which is my custom as I do not like going back for seconds.  Not because I wouldn't eat them, but because by the time I eat the first plate, I might be too full to get up for the second one..ha.  Notice the frog leg on top?  Kinda looks like a fish of some sort. 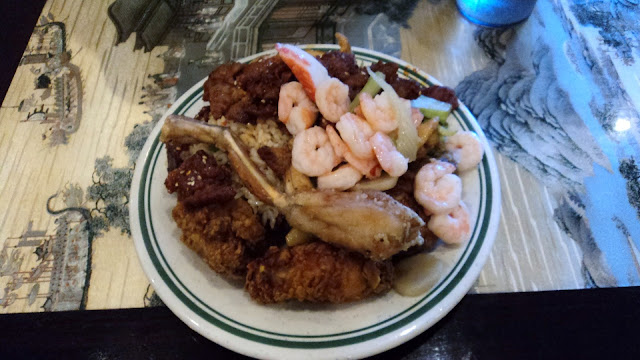 Scootard was ready to attack his food like he was mad at it!  hahaha 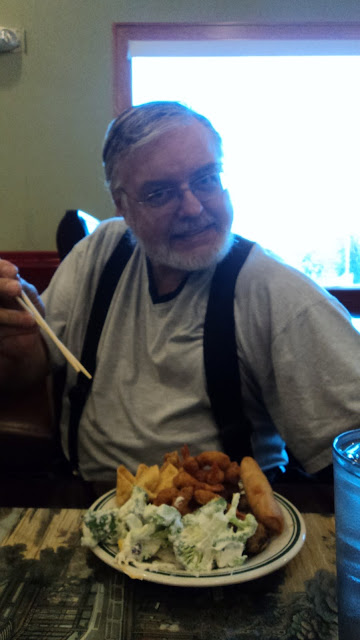 by the time we finished eating, the sun was setting.  I was still in need of some meds and we needed to gas up Ms Vicky. 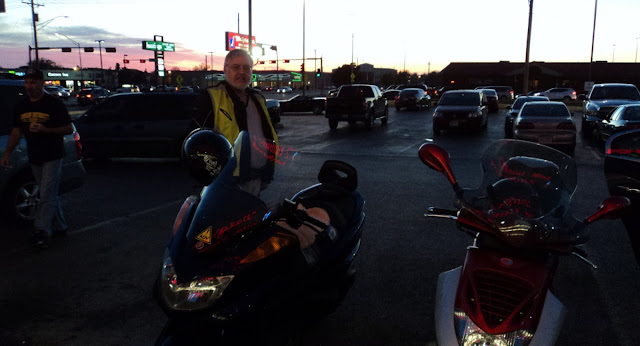 For some reason, Ms Vickey burned a LOT of gas. We just changed her oil and checked the spark plug. So, I don't know why other than the fact that I had the throttle pinned; which is something I had never done before. But at least I had found out that she will in fact do 75mph, but not a mile more...ha. Bless her little heart....:-).


After we got gased up, Scootard decided to get the "bug matter" off of our windshields as well.

﻿
And now, off to more important things﻿.

YES!  DRUGS!  We decided on the "night and day" variety since we have to make a trip out of town again tomorrow. 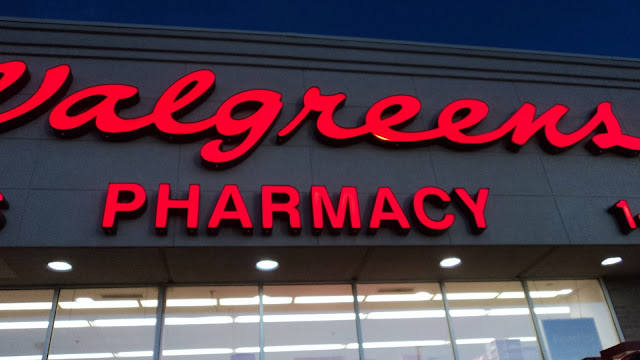 ok.....so I made it home and am ready to kick this cold/flu -allergy thing that is trying to get me.  You can't keep a good Scooterchick down for long! 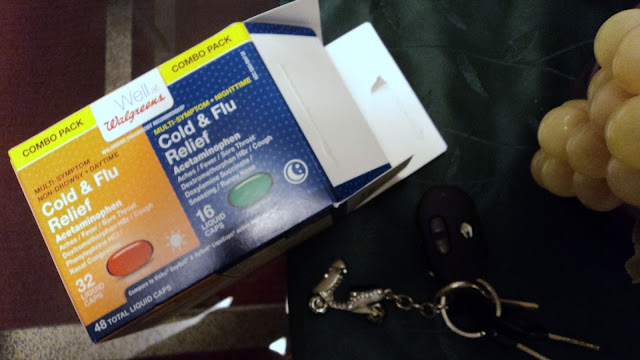