Japanese Cuisine and Fall Clean Up

It has been several days since my last post.  Possibly three weeks.  But there is good reason.  I have been BUSY since we got back from Europe.  We realized that with all of the planters and things that we prepared during the last season, the stuff had to be put away before heading back to Canada.

But first...a lunch date with my daughter and the rest of the crew.....:-)  I had seen this place in passing before.   So, when my daughter offered to take all of us to lunch, we took her up on the offer.  It was a bit weird that no one else was in the parking lot.  I began to wonder if they had eaten the food and were buried out back! ha. 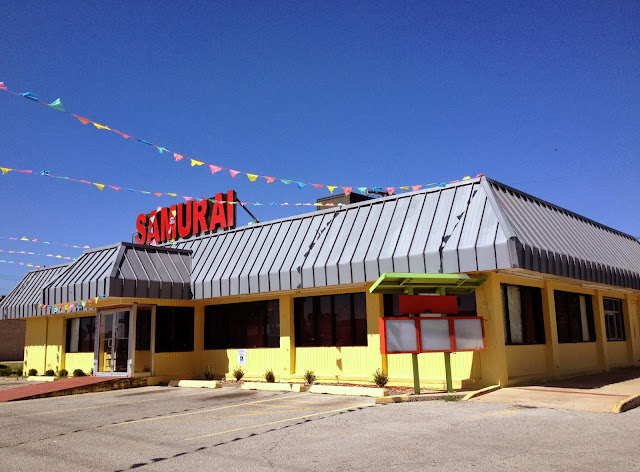 Surprisingly enough, we were the first ones there and the staff knew my daughter.  She was stoked about having chosen this place for us. Here is a picture of Tracey and Helen smiling over what was to come...:-) 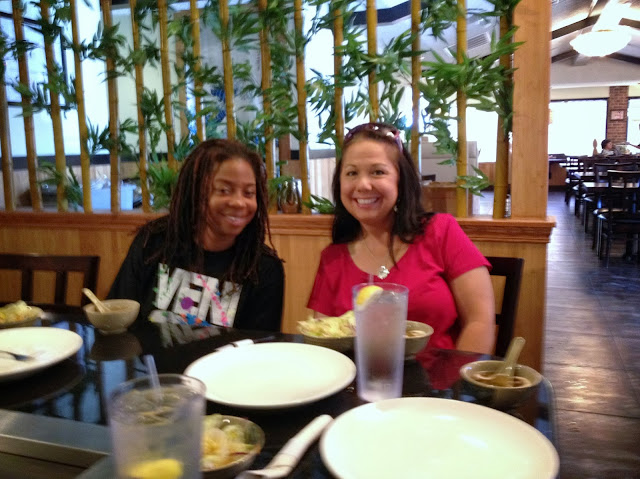 And of course, while they were busy playing with Chris's camera...he was anticipating the cuisine that was soon to be prepared right before our eyes........ 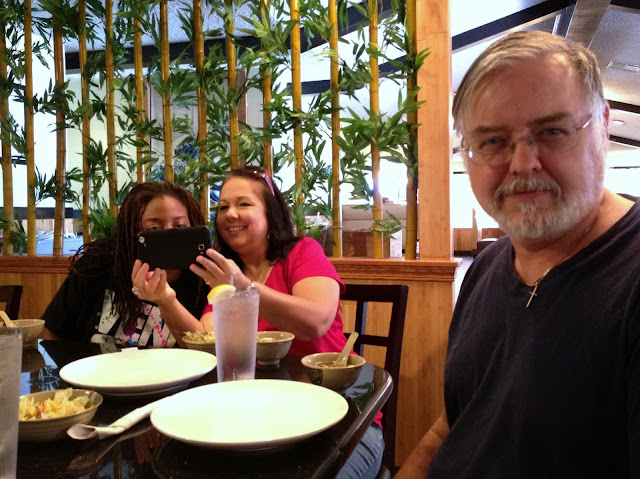 Our chef arrived with his cart stocked with goodies and all manner of cooking sauces to began the "show".... 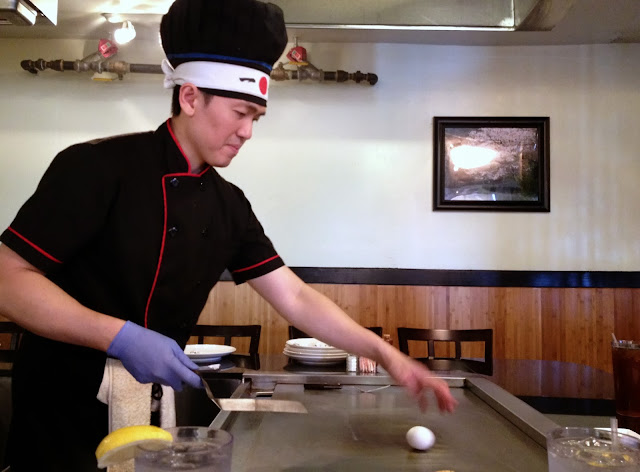 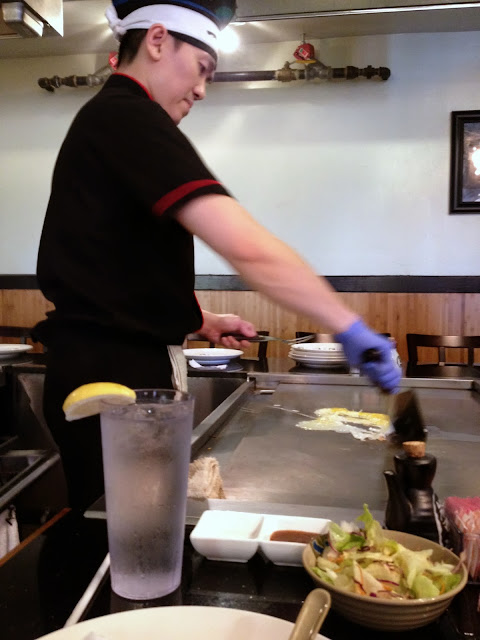 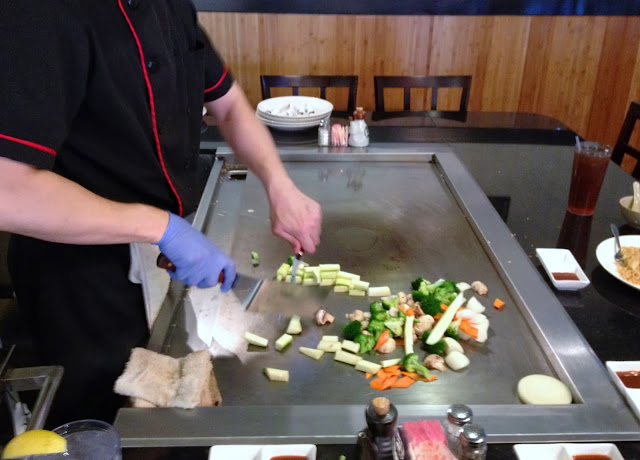 they must know something I don't know yet.....look at them! haha 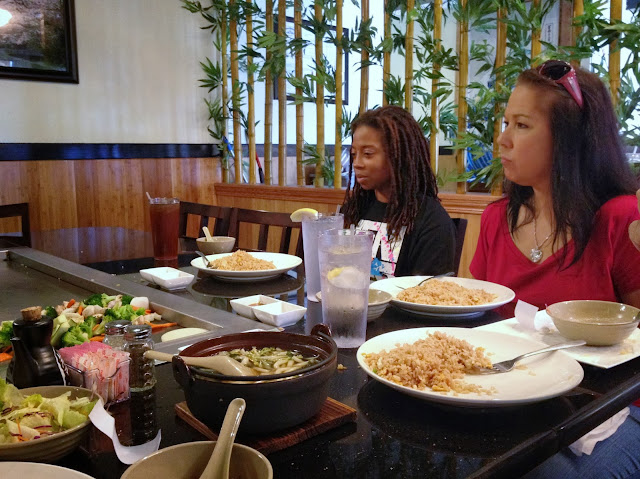 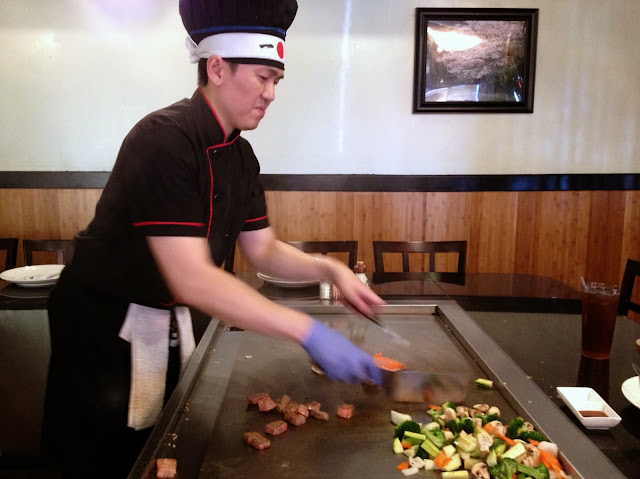 sheesh!!!  A girl better watch her hair around this dude!  Good grief! 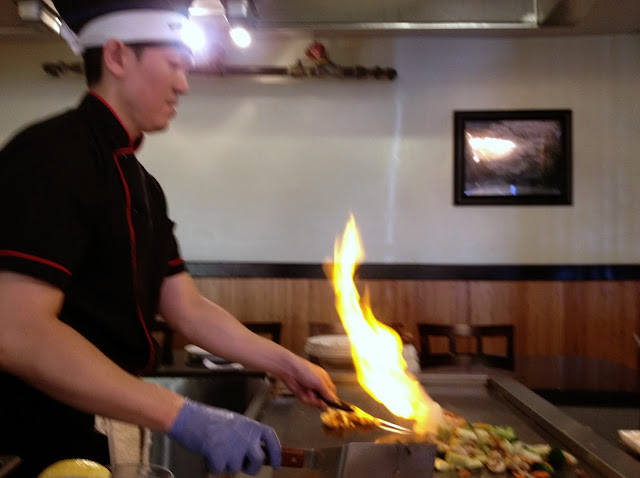 I had chosen the lobster dish.  Mine was one of the last ones to come off the grill and I was sure it was going to be over cooked, but it was perfect! 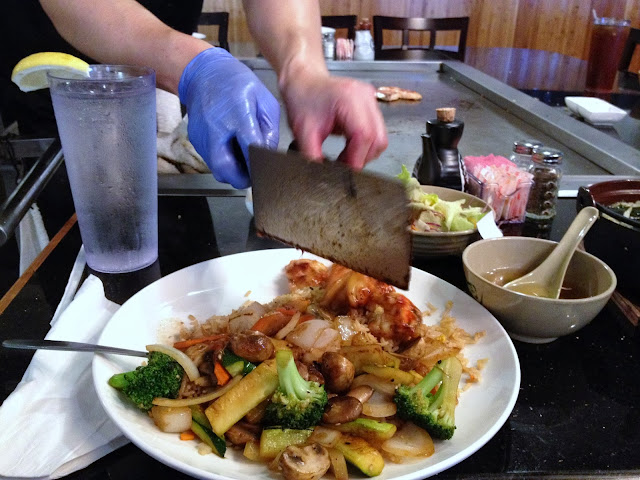 We finished lunch and returned home thinking of all of the work that still needed to be done in the garden before our return to Canada. All of the soil in the pots needed to be put into the wheel barrel, the indoors plants treated and brought back inside the house, most of the furniture put away, etc.
I decided to start with the house plants since it would take two treatments before I could bring them back in.  All was going well until I went to spray some Neem oil on them and saw something move.

YIKES!!!  It was NOT the tree trunk, but a mantis that had successfully disguised itself as part of my plant.    I screamed and I could swear he did too....haha.  I ran and got Chris and he took the picture.  I kept my distance.  All the while thinking to myself, I was about to embark on a dangerous endeavor of treating my outside, indoor plants. 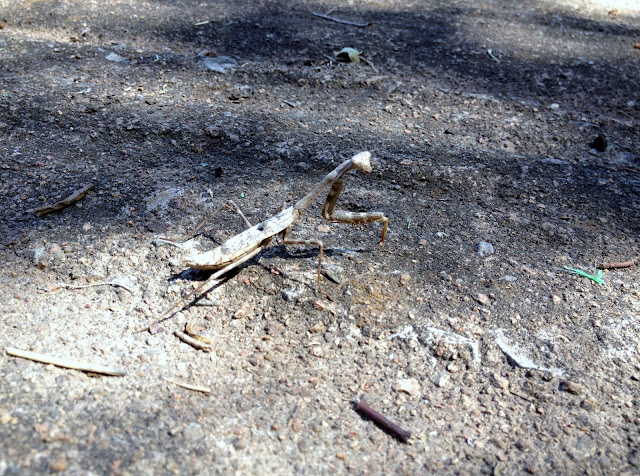 After surviving the bug on steroids, I got the plants treated and dumped most of the dirt from the pots in the garden into the barrel. 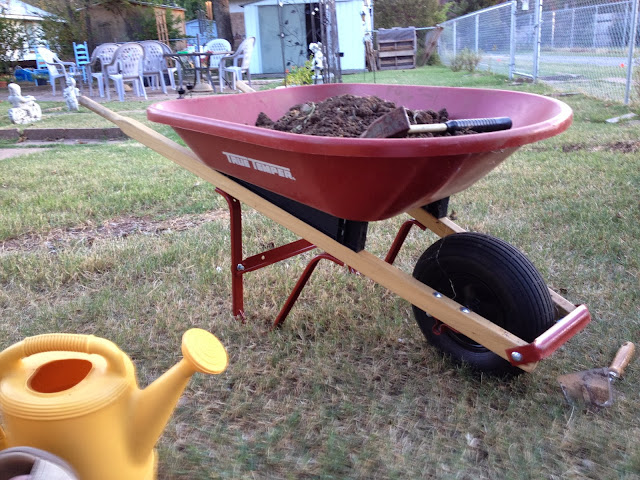 I think he's ready to get his hands dirty....ha 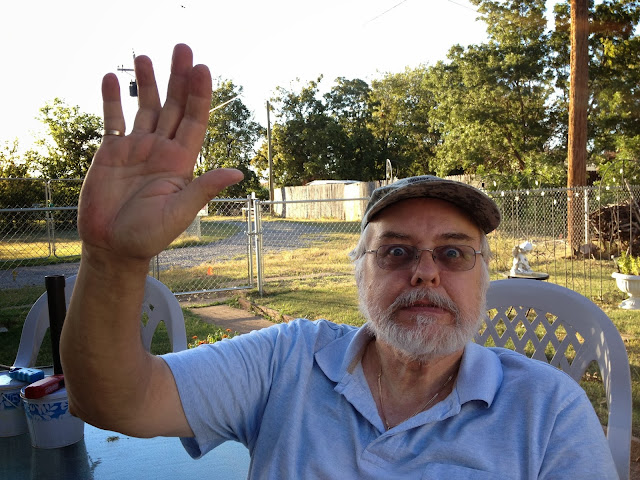 We had chosen lots of color and had hopes that these would fare better than the plantings that we had done earlier this year. 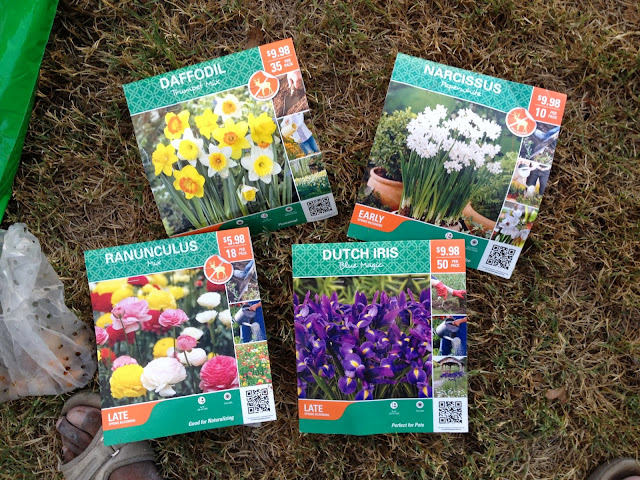 We dug several holes that seemed to be large enough to put a tree in. But they were only six inches deep and two shovels wide. These are a combination of Daffodils and Dutch Irises. 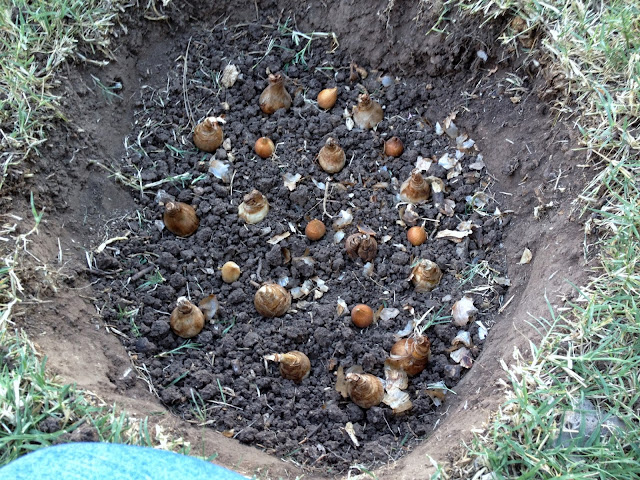 After digging several holes from the side of the house clear to the back, we were finally finished planting the over 100 plus bulbs that we had purchased. My angel had suffered a broken wing and had to be resettled elsewhere in the garden....poor dear.....:-( 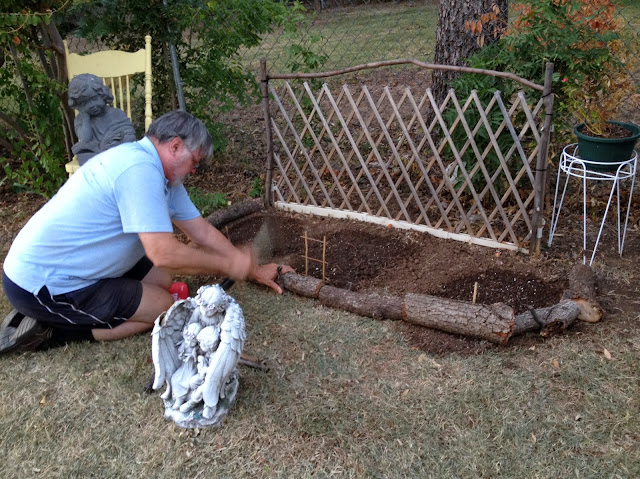 Unfortunately, we will not be here in the Spring to see how things come up, but Helen has promised to take pictures for me......:-). 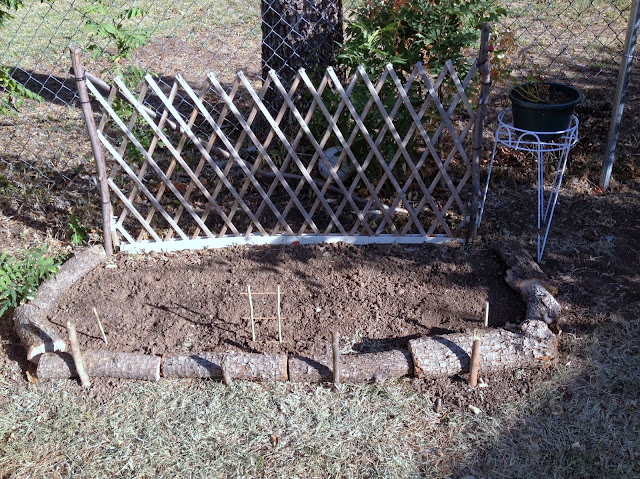 By the time we finished, the sun was setting, we were both sore from all of the kneeling, digging and bending.  But the work was done. 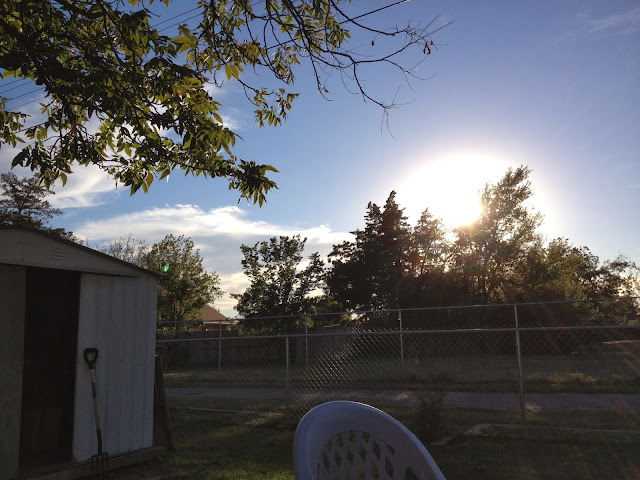 Now to get ready for the end of year bar-b-que that will be hosted in what is left of the garden.