I have spent several years living in the Southwestern part of the United States before moving to BC. So, when you move to a place like British Columbia where there is always more rain than sunshine, it can be quite an adjustment. I have NOT adjusted after nearly 5 years. When you can actually go and do something without feeling like a drowned cat is rare. Most of the time, I just brave the weather with Scootard or I would never go out for most of the year. This particular morning, we had some business in the "Big City" and decided to get going and try to make the best of things.. 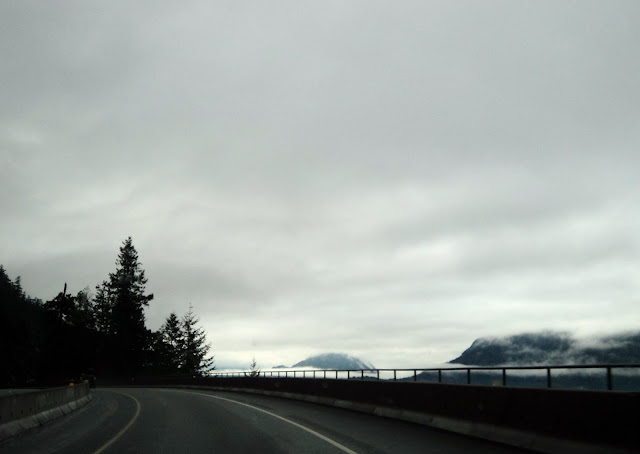 I love being by the water and I especially like looking at boats and yachts as well as RV's and other modes of travel.  Even though it was over cast outside, the marina was still beautiful....:-) 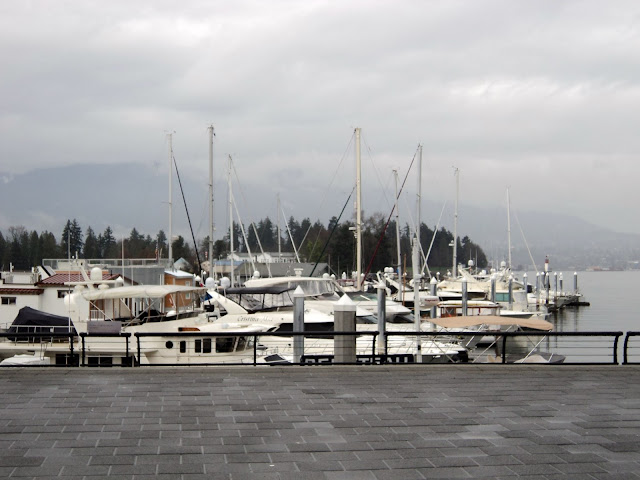 Strangely enough, I don't like it when my clothes get wet.  I figure if I have to do the rain thing, I should at least have an umbrella.  I didn't have one with me so I decided to take the pics from the car. 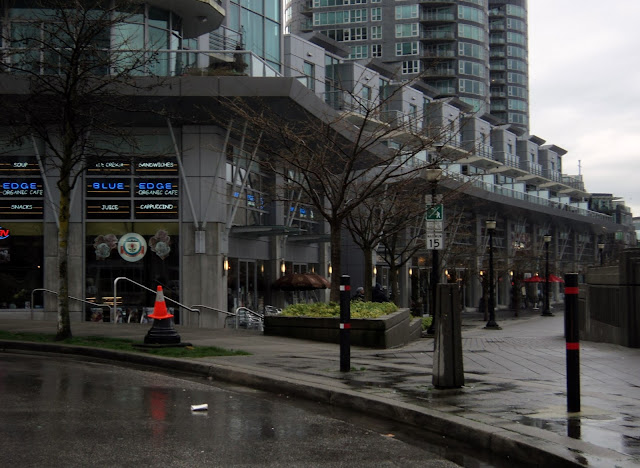 I did finally stop raining after a while, but we were on the move again.  I love to ride through the down town areas of big cities to see what they have done to beautify their surroundings.  I'm sure this has been there for a long time, but I don't remember seeing it before. 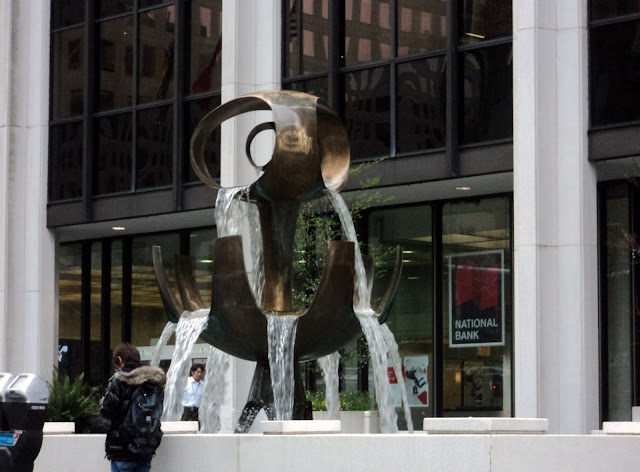 Cityscapes always make great pictures if you have the right camera to take them with.  They are especially pretty at night when everything has slowed down and people have settled in to their homes. 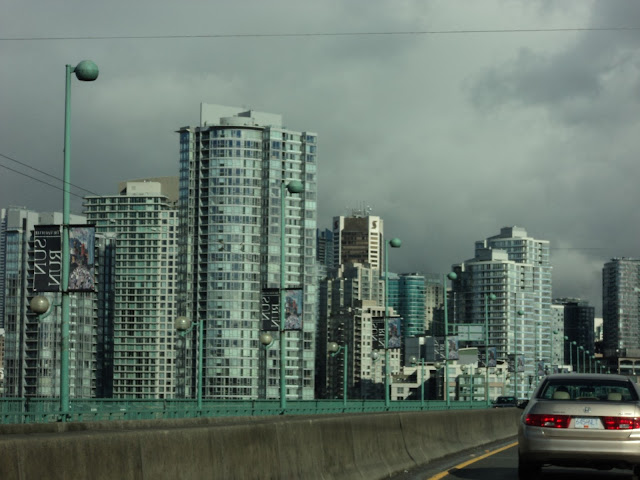 And this is a movie set that we happened upon while driving around.  I don't know what the movie is going to be or who is in it, but we got there just in time to see them shooting a scene where an older man was having a conversation with a younger man that turned a little rough.  They shoot a lot of movies in Vancouver or White Rock and places like that.  If you look at the guy in the "ribbed jacket" on the left, you can see him holding a long microphone or whatever that thing is.  You can also see the shade screens that they are using. 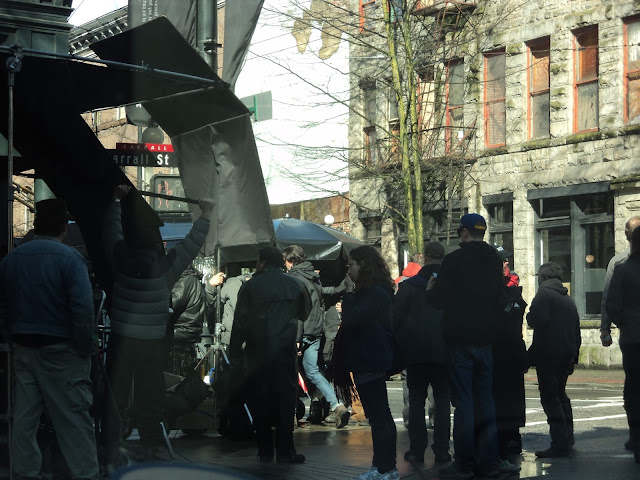 Here is the scene that they shot where the older guy got rough with the younger.....I wonder what this movie is going to be called and if it is in French or English......hummmm.
Oh well.... I guess I missed having my name in lights that day! ha 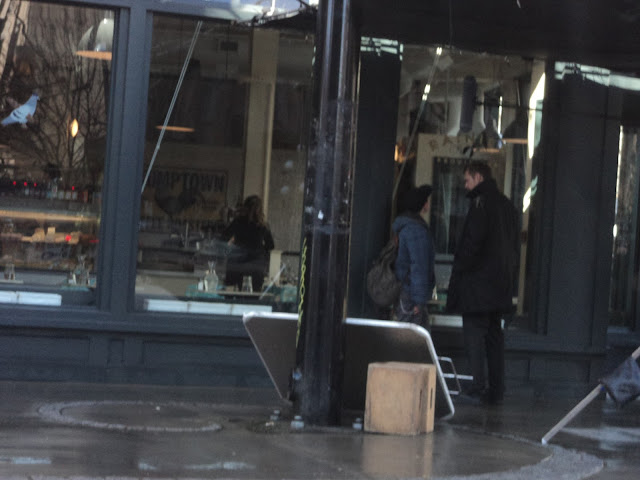 We were near a historic place called "Gas Town".  This is a statue of Gassy Jack Deighton.
He was a Canadian bar owner.  He most have sold a lot a liquer to get a bronze statue of himself erected!
He died at the age of 44 in 1875. 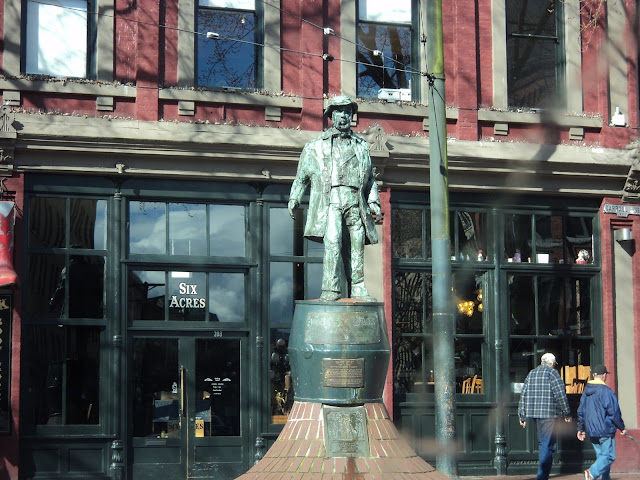 We made our way out of Gas Town and I took some pictures of other things I thought nice.  Scootard wanted to take fountain pics......:-).  I can imagine just sitting there and letting the water run over your feet.  That is if it ever gets warm enough here to do such a thing......:-(. 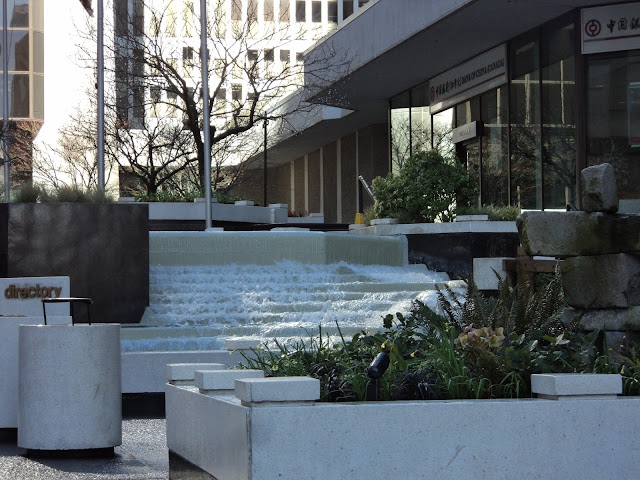 Some one had the idea that this would add to the beautification of Vancouver.....I find it a bit confusing..... 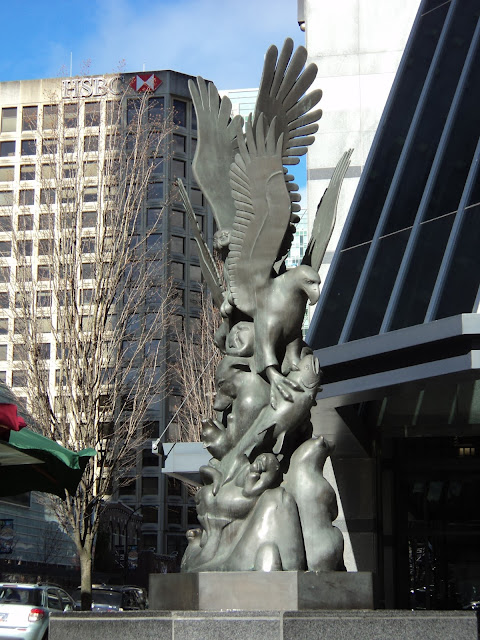 One of my favorite things to see are the lions that sit at the entry way of the Lion's Gate Bridge......  I just happen to be able to get this picture without car pollution. 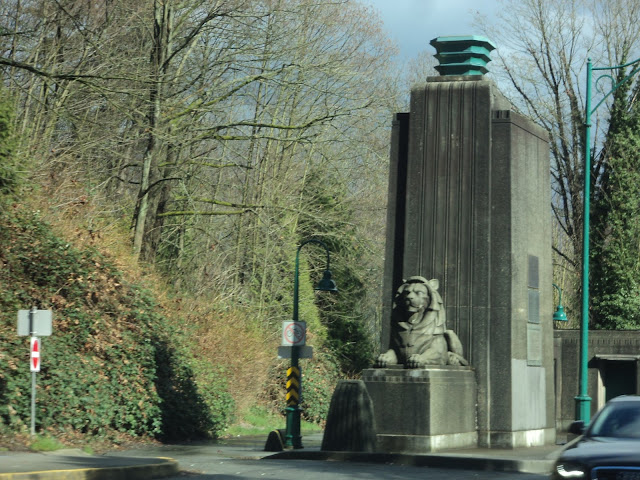 And I remember the first time I rode Ms Vicky across this.  It seemed like I held my breath forever before we got to the other side.  It doesn't look too bad right now, but at the time I was on it with my scooter....there were a LOT more cars than what you see here. 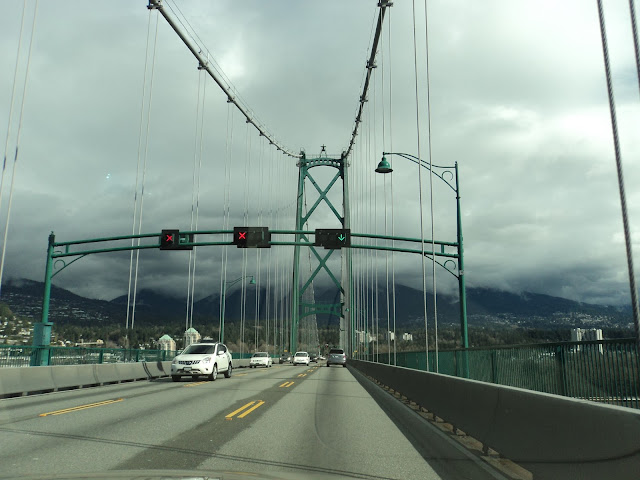 We finally decided to go for lunch some place and decided on a place called Lonsdale Quay ( pronounced Lonsdale Key).  I know.....weird.  I like all of the stores and shops here...... 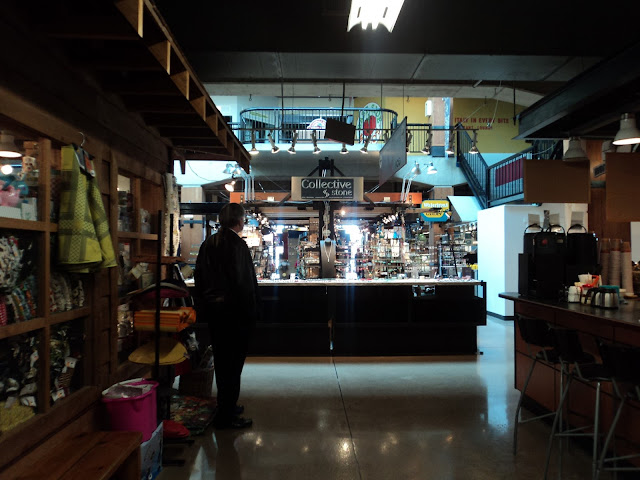 I wanted to sit outside as I find the water very calming and beautiful.  But if a Canadian says "if you go out there, the wind is going to suck the heat right off your bones".....you might want a table inside! haha 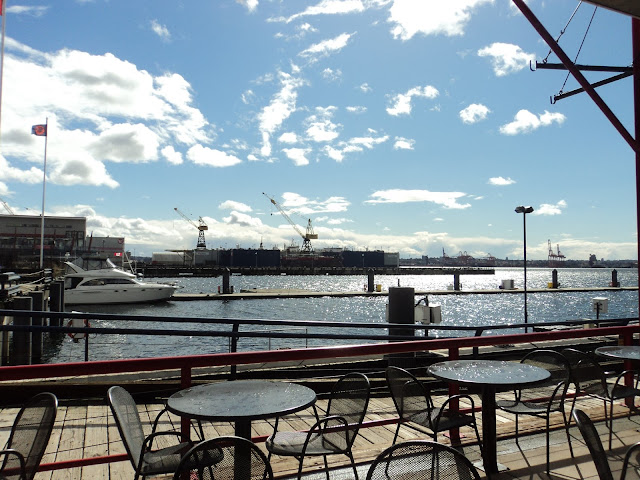 So, we settled down at a table right by the window and I asked about this boat.  It's a fire boat thingee.  Coming from the SW part of the United States, I don't see these unless I'm in Canada or some other coastal town where they have a lot of marinas. 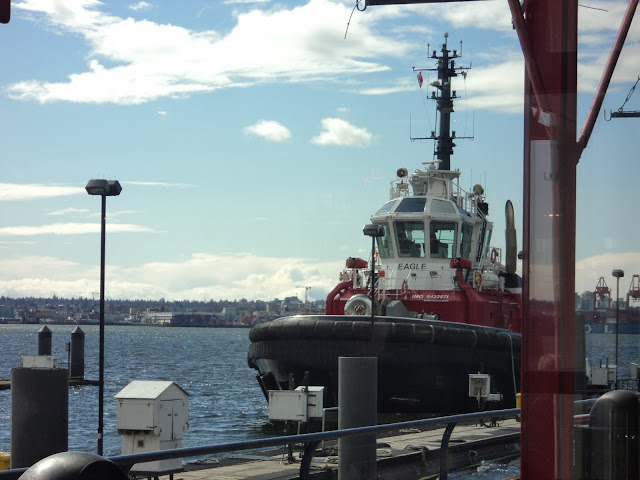 by now, we were starving.  I had a typical lunch.  I know some of my friends don't eat animal products.  I haven't gotten there yet although I have tried and almost starved to death. 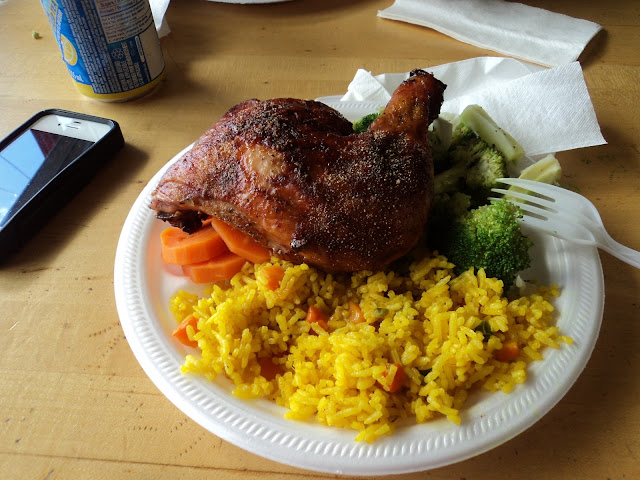 Scootard ordered some Spanakopita  which is a greek dish of spinach, feta and spices in filo wrapping.  Not enough protein for me although I would eat this with something else. 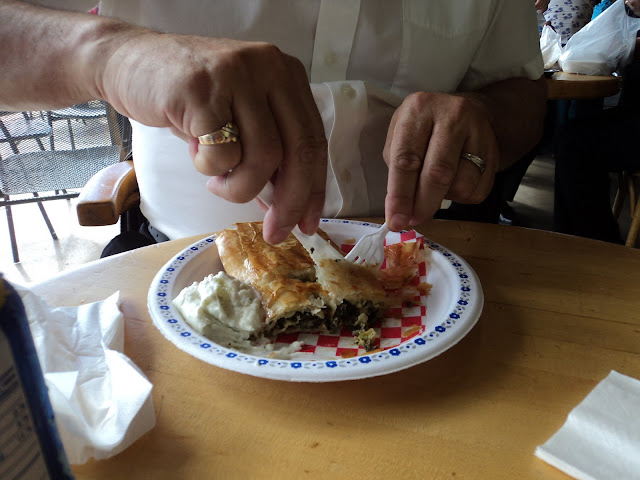 I looked around a bit and then we had to get going as we still had the rest of the day ahead of us for running the business. 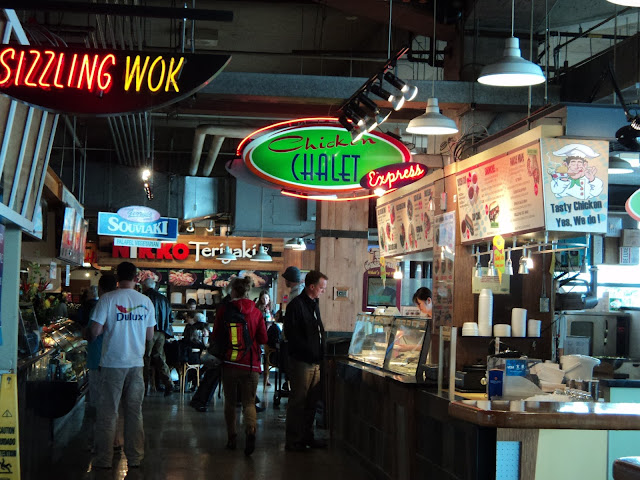 We made our way through the city and finally headed back home...... 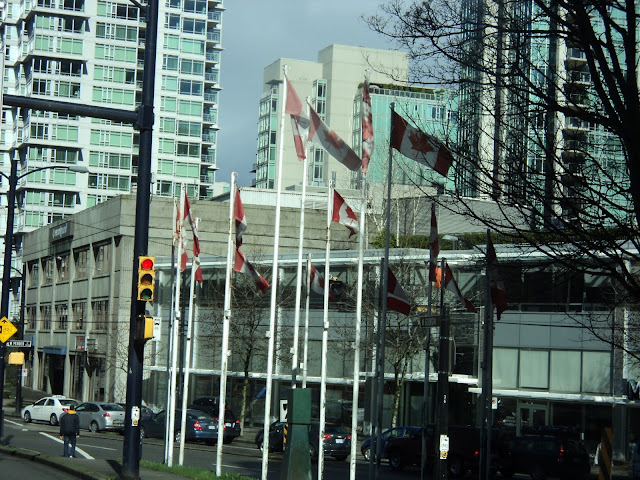 I'm glad it finally stopped raining, the sun came out for a bit and the day ended with warmer weather than when we started out in the morning.....:-)