Our bikes sat for a couple of days as the temperatures were simply too hot to enjoy ourselves staying at 100-106 degrees.  So, it was good to be able to ride in 80 something degree weather.  We washed Ms Vicky and Maj the day before and got them ready to roll again. 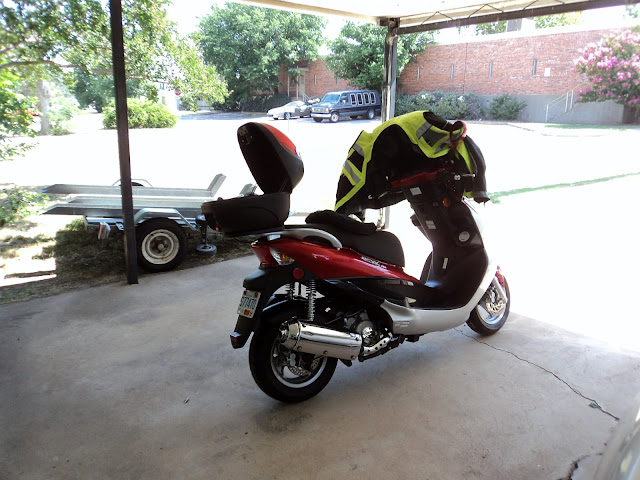 Our first stop was a town called Duncan.  It only took us about an 40 minutes or so to get there.  It was still a little warm though and the wind just about pushed me into Texas!  We made it in one piece and decided to take a short break and get some water. 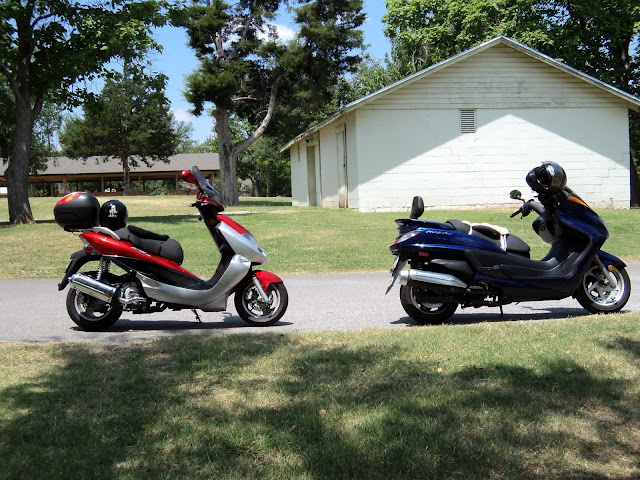 Scootard put a small cooler bag in his bike with one of those freezer thingees.  So, the water was nice and cold.  I was too hot to even try to strip off my gear  for such a short stop. 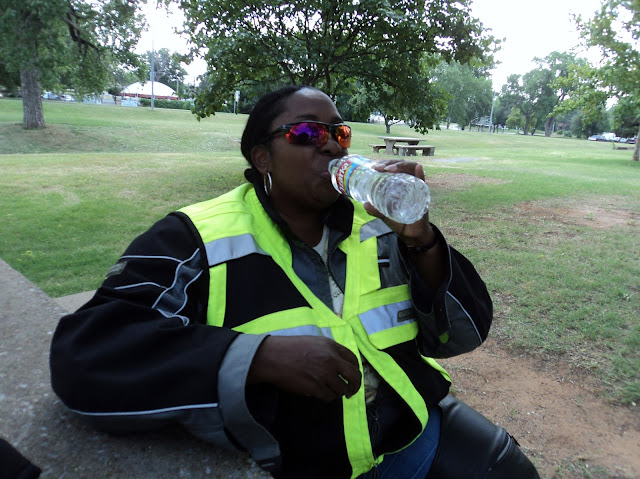 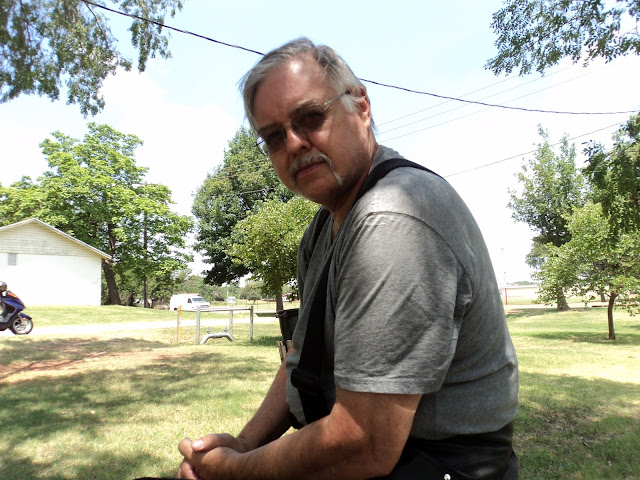 We wanted to ride out to a tiny town called Comanche which was just another 15 minutes.  A lot of the towns and counties in Oklahoma are named after the tribes of the first nations people.  It is a tiny little place with not a whole lot going on.  This is a picture of the post office.  I think we saw two cars pass us in the town and not another living soul. 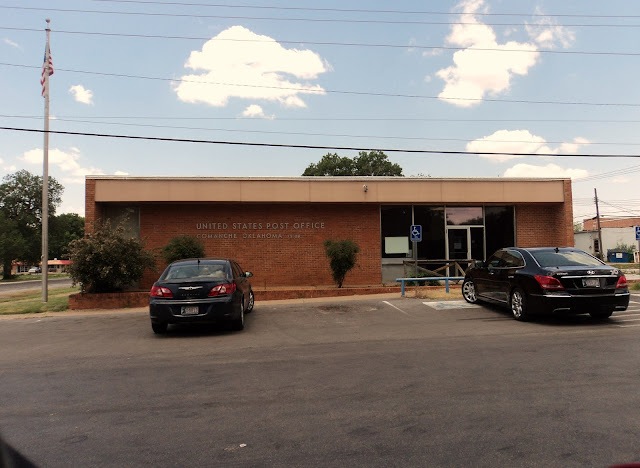 One of the things that I love about small towns is their love of wall art.  This one is very old as you can tell, but still cute.  I wondered how long it has been there. 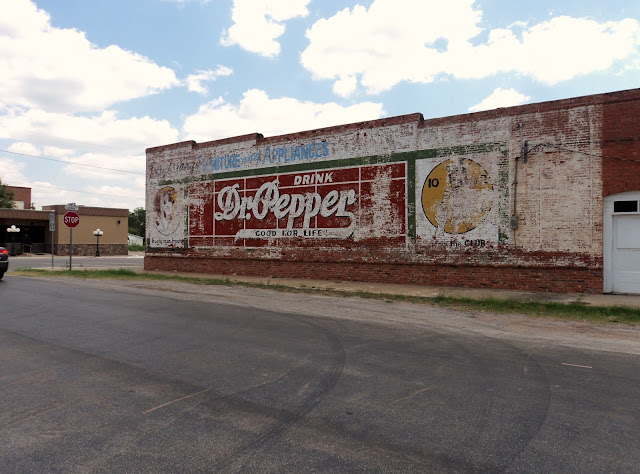 We also try to get a shot of the main street of any town we ride through to give our fellow bloggers an idea of what we experienced. 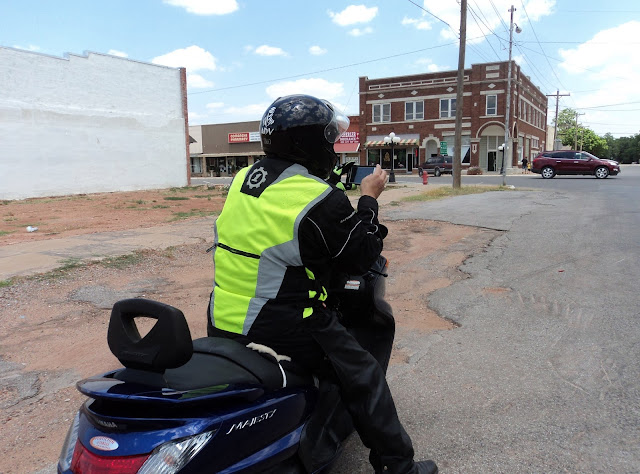 Here is a long shot of one of the main streets.....  Not much going on and this is on a Tuesday! 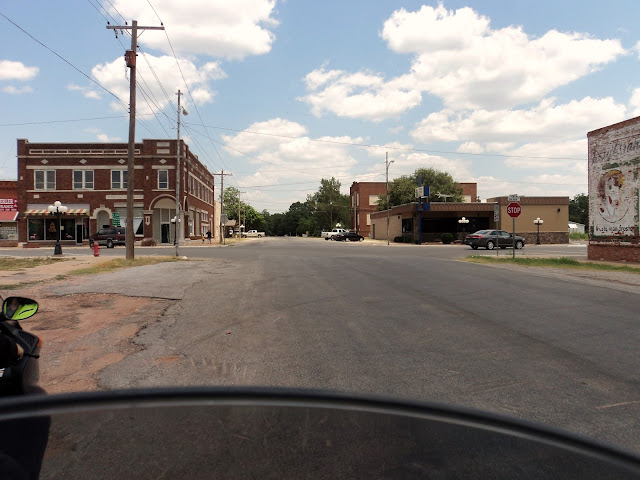 Our next stop was a tiny town called Temple which took 40 minutes to get there.  I get a little nervous when my gas gage drops below half full.  So, it was time for me to get some petrol. 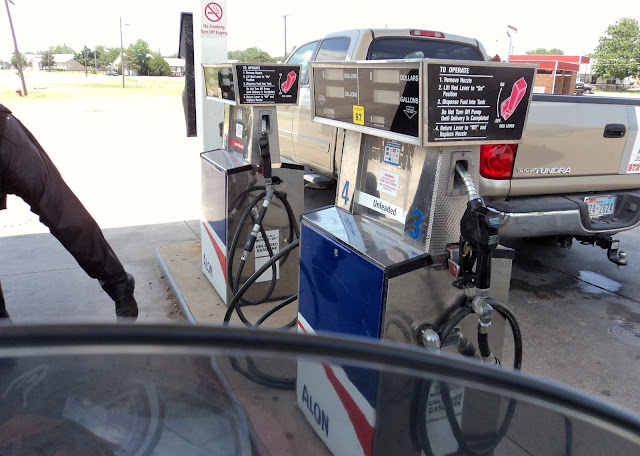 Scootard doesn't get as nervous as I do about the whole gas thing, but decided to put in a "splash" as he calls it. 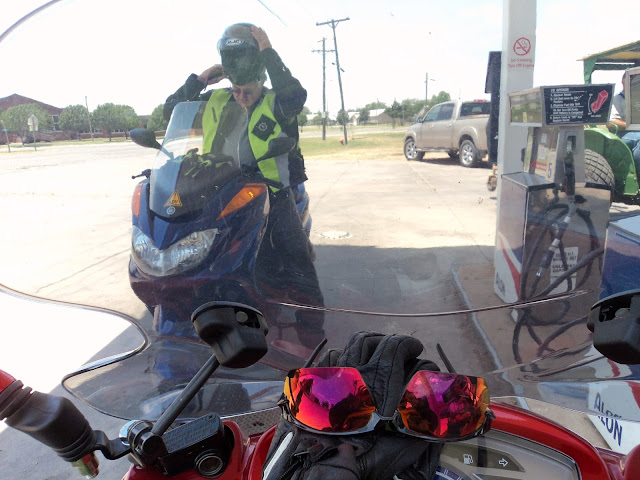 The prices here were not terrible compared to other places, although high for the Southwest.  Eat your heart out, Canada! haha 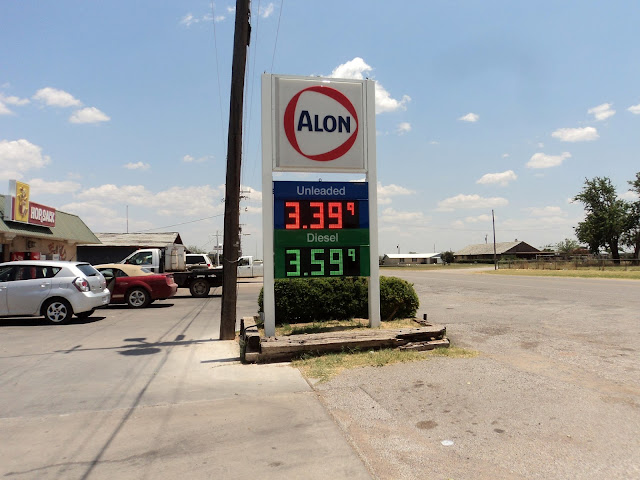 The post office in Temple almost seemed smaller than the one in Comanche if that is even possible! 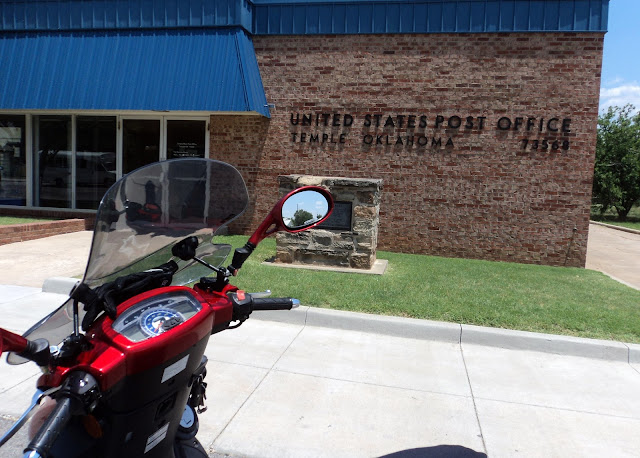 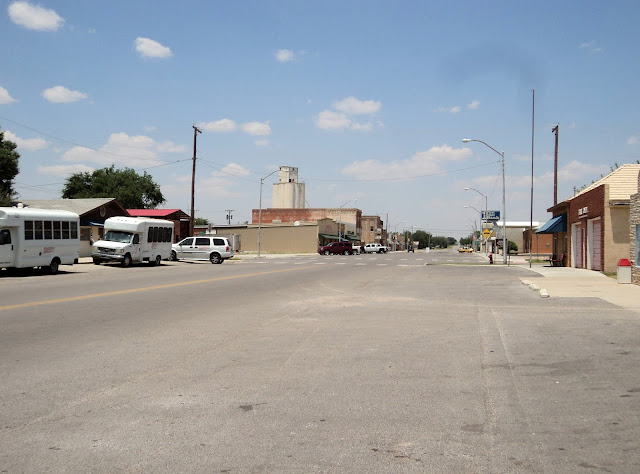 Temple has this tiny little museum.  I have no idea what is inside as no one was there to let us in.  But it was true to the size of the town as it was itty bitty as well. 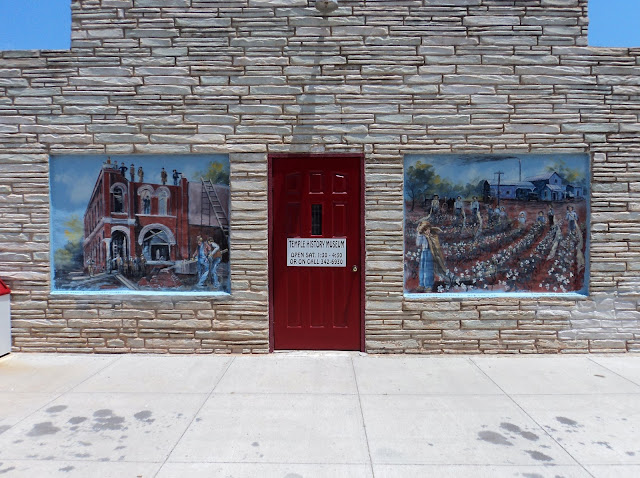 this is the side wall of the museum.... 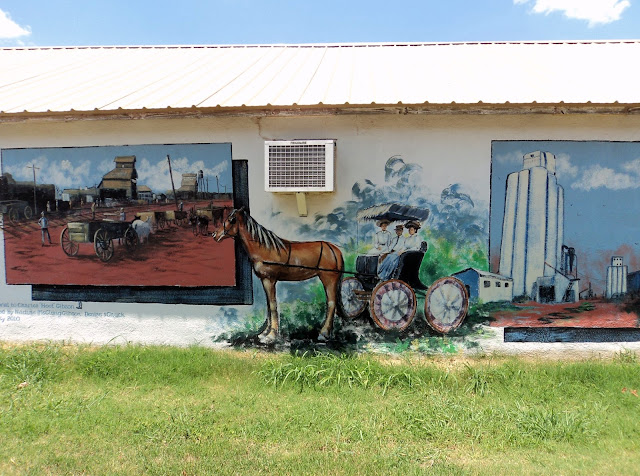 Ms Vicky and Maj were patiently waiting for us to return after our photo shoot...... 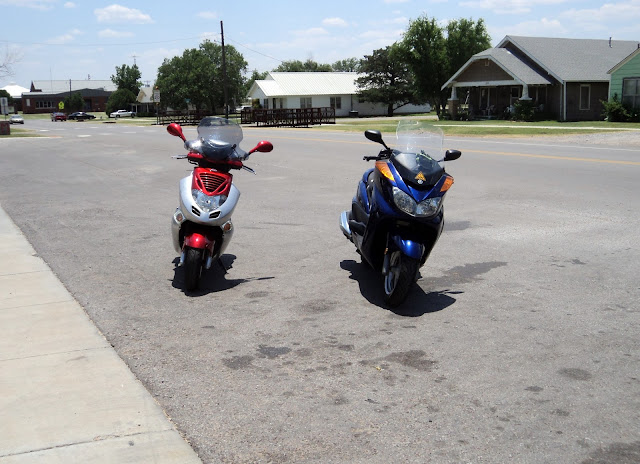 I decided to get a shot of this plaque just for information sake...... 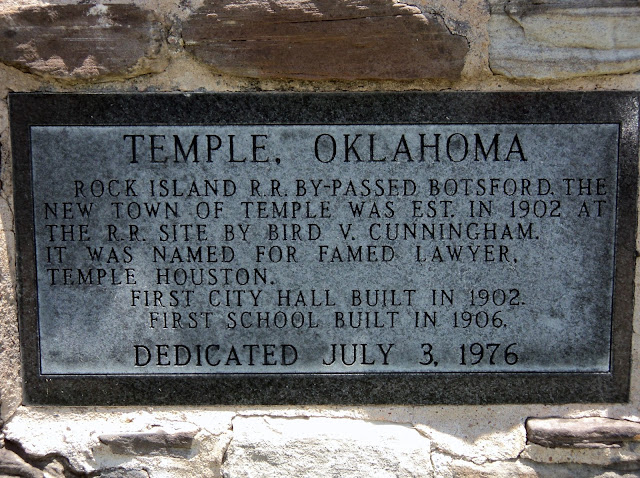 We found a drive in restaurant and decided to stop and get some ice cream.  When Scootard turned around to talk to me, this is what he looked like.  I FREAKED RIGHT OUT!!  I mean I felt them pelting my legs and gear as we were moving, but had no idea that he had this going on.....ha  YUCK!!  Here's to bugs in your teeth!  EEKKKK!!! 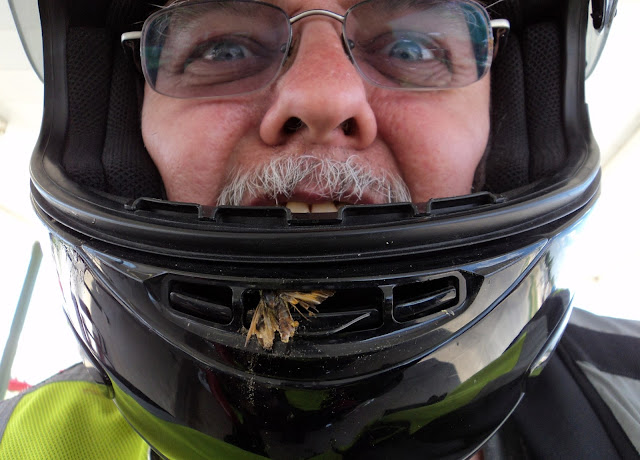 We asked if we could use their rest room and also ordered a snack to help cool us off a bit. 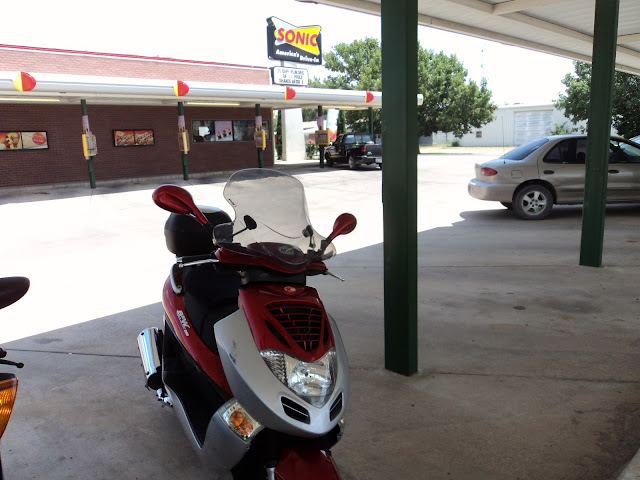 Didn't get any of this although it was looking pretty interesting..... 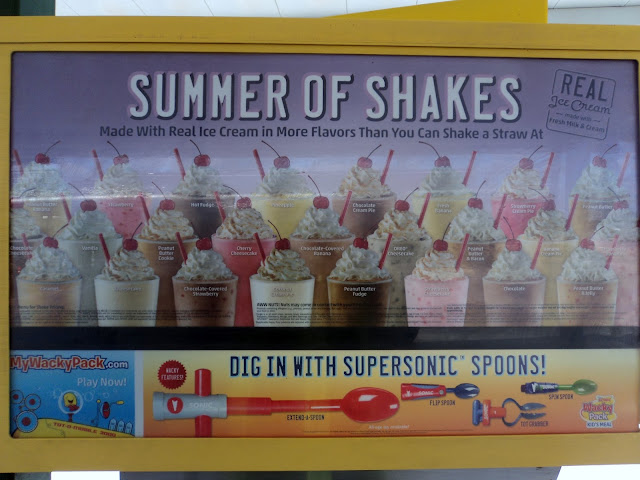 Scootard ordered a hot fudge sundae and it took us no time at all to plow through it.  The sun was coming out full swing and things were heating up a bit. 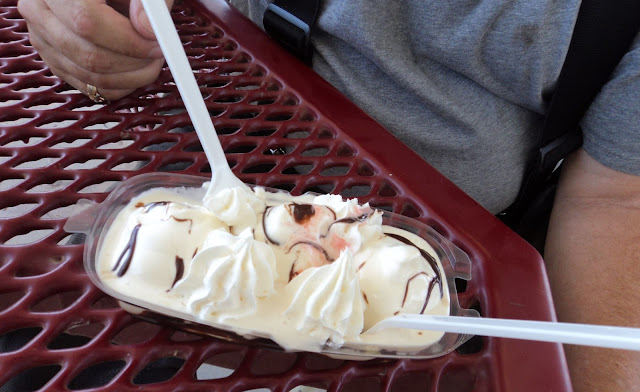 We hit the road again and started out journey back to Lawton.  On the way, I spotted these space ships complete with antenna! ha 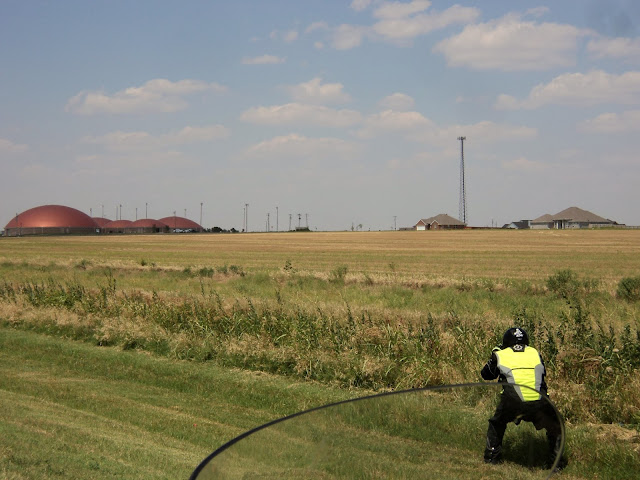 Here's a closer look.  I made sure Scootard was glowing when we left.  You know all the moon dust and stuff might rub off on me! 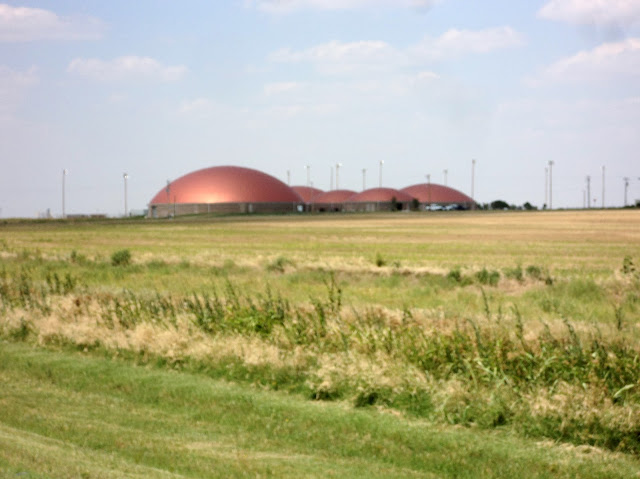 And of course once we got back home, 30 minutes later, this huge thing was stuck to the grill of my bike...  OMG!!.  I mean really!!!??  I don't know why they come all the way "around" his bike and find me!  He was riding ahead of me for a lot of the trip.  geeze.....I zoomed in close so that I wouldn't have to stand that close to it.  Sorry but bugs make me squeamish.  I have no idea how I ever went camping!   this one was just a tad bit smaller than that big black thing that went up my sleeve...... 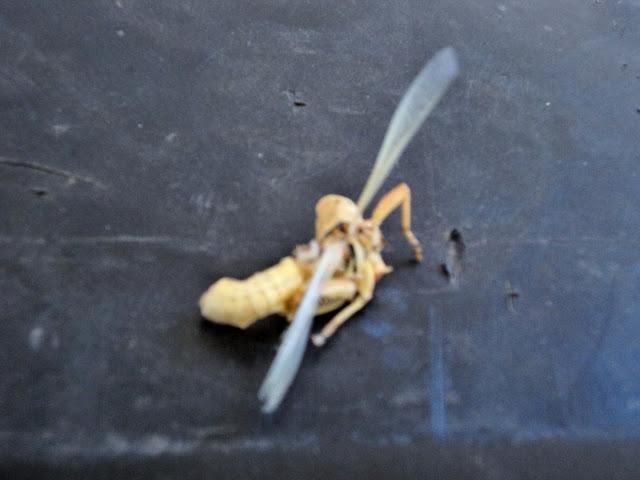 Scootard decided to dispose of it for me...... 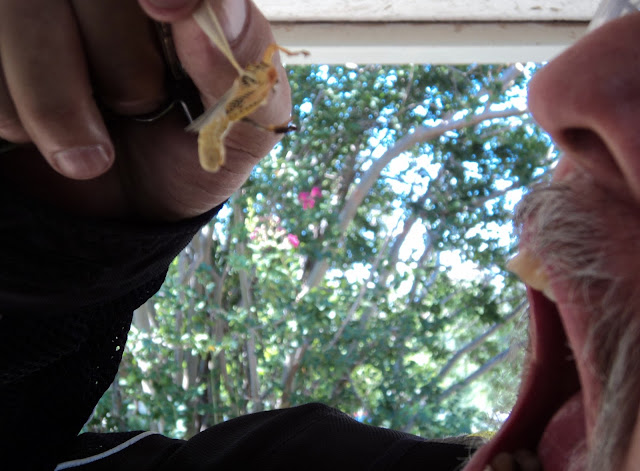 I know!!  Is that not the nastiest thing you have ever seen?  I'm glad he changed his mind at the last minute.   The next kiss would have been several years away! haha

see ya next time!
Posted by Tripping Sister! at 7:41 AM 9 comments: