When I moved to Canada, I started really experimenting with different recipes and spices to pass some time.  One of the things I concocted was a pepper blend that I gave various names to depending on which peppers I actually used.

I figured since our trip has been delayed until January, I might as well get busy in the kitchen making some of my famous blend.  We went on the local Army base and visited the commissary and loaded up on peppers.  The included Serrano, Jalepenio, (green and red ones), Pablano, Anahiem, crushed red pepper, Habanero and a white pepper that didn't have a label. 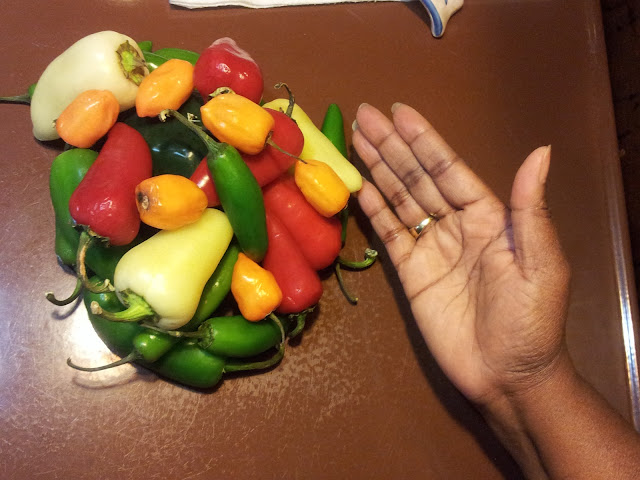 Having done this before without being properly prepared, (believe me, I paid dearly too);  I decided to take some precautions this time around.....Now, I'm armed and dangerous!  I pulled my hair back, turned on the exhaust and put on my "protective gear".  They teach you that in the military when you are under threat of a chemical agent.  haha  Oh, I wore plastic gloves as well......:-). 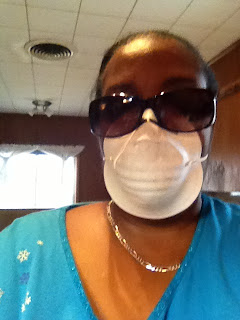 We had just purchased this small chopper from the store last week and I wanted to try it out.  This picture is actually AFTER I used it to chop everything.  I had to tear it apart to clean it.  It worked like a dream.....:-).  The cutting and chopping of the peppers and fresh garlic took about 20 minutes.  The peppers had to be cut into smaller pieces that would fit into the chopper.  AND THEN, the chopper stopped working at one point.  It took me an addition 15 minutes to get it figured out with the help of Scootard.  He said it had some kind of saftely mechanism on it that will not allow it to start unless all of the parts are properly seated. 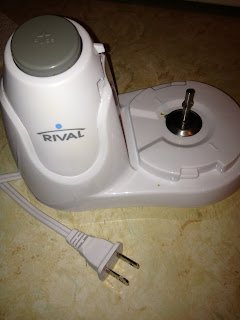 After getting everything chopped, I heated a large skillet and added some virgin olive oil (first cold pressed), and added all of the peppers including the seeds.  After cooking them for about 12-15 minutes, I added some ground Cayenne, White, and Black pepper that I had already blended in another container.  I guess by now you understand why the mask, glasses and gloves.....:-).  The house was filled with the smell of pepper even though I had the exhaust on full power. Once the peppers were tender, I turned the heat off and added 6 large cloves of fresh garlic that I had chopped in my new chopper.  I wanted the garlic "cooked" but not "toasted" which is why I turned the heat off before putting it in the pan.  The oil was already hot enough to do the trick. 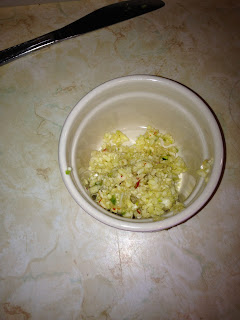 ﻿
And of course, I had to have something special to put it in.  I just happen to bring my jar from Canada already labeled.  After letting it cool for just about 5 minutes or so, I added about a tablespoon of Buckwheat honey.  I used that particular kind because it was the only honey I had on hand.  I didn't do this in my other recipes.  But I wanted to see how it tasted.  I experimented with a small amount first before adding it to the entire batch. 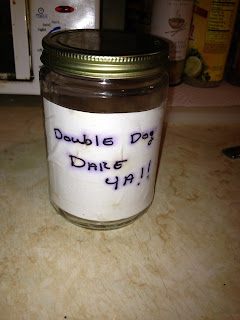 But after looking twice, it occured to me that it may not be the right size. So, I found another one and decided to go with it instead.  It was till too small and I had to put what was left over in a small dish.  No matter though.  We could use it for dinner that evening....:-).  Now, the filled jar was placed in the freeze for about 15 minutes to help create a seal 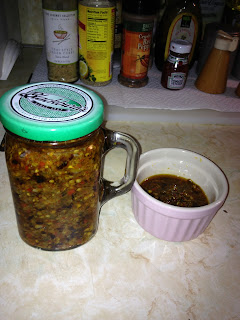 We had wild salmon, augratin potatoes and broccoli for dinner with my pepper sauce topping the fish.  It was excellent.  So much so that I forgot to take pictures!  haha
Oh well, trust me.... it was good, but you really need very little.
See ya next time
Posted by Tripping Sister! at 5:33 PM 4 comments: