Bugs In My Gear!

For the last 3 weeks, we have been working away in our "garden" and trying to make it an oasis for our time away from Canada.  All is done with the exception of the big gaping brown patch that used to house a brick oven type thingee for several years.  We (actually he) raked the soil and added 14 bags of topsoil and some cow manure to help amend the soil and added some Bermuda grass seed.  We have our fingers crossed that "something" will actually grow there... 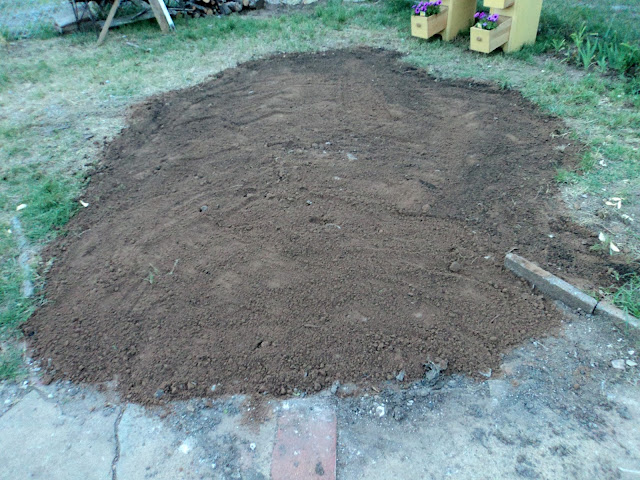 Now, it was time to relax a bit and think of the next adventure.The temperature has been in the 90's and sometimes over 100 degrees.  Since the back of my property faces the West, it is difficult to enjoy the backyard unless we use the blue chair sitting area or the chaise lounges that we recently purchased.  Even then it is best to go early in  the morning or when the sun is going down in the late afternoon.  We do both. 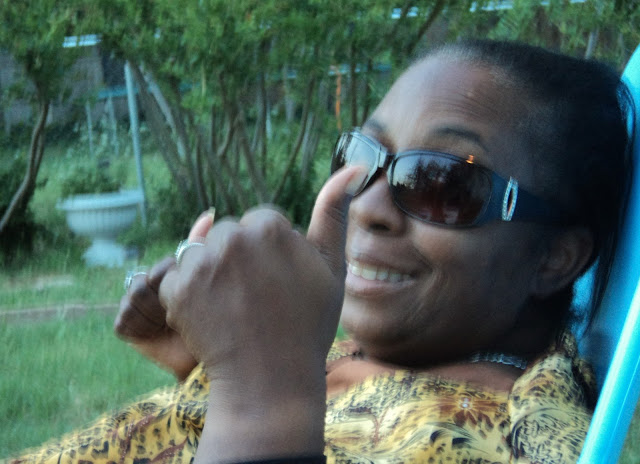 Somebody is having a really good time chillin out here....ha 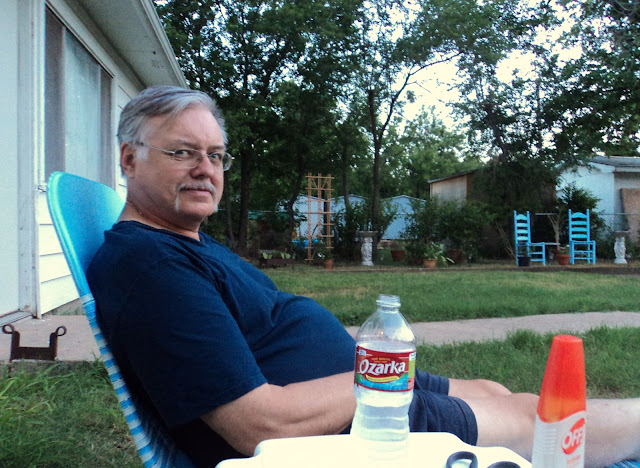 I guess the good thing is that Scootard built this "thing" in the corner and we have Honeysuckle growing up onto it.  He used the sticks that we salvaged from the cuttings off of our Crepe Myrtle trees last year when we trimmed it. We call it "the grand construction". 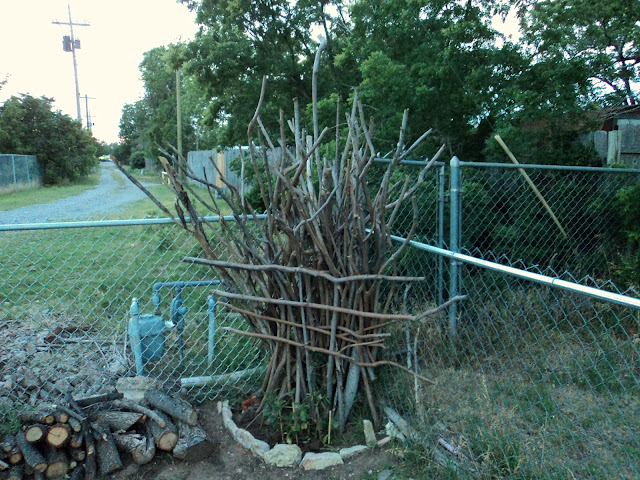 We waited for a spectacular sunset, but it never really happened....:-(. 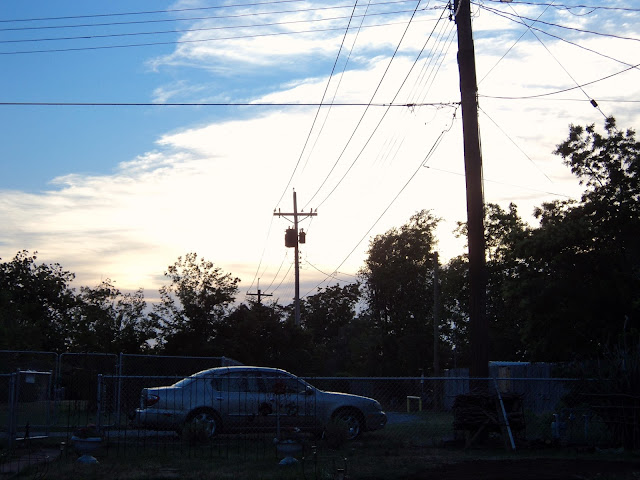 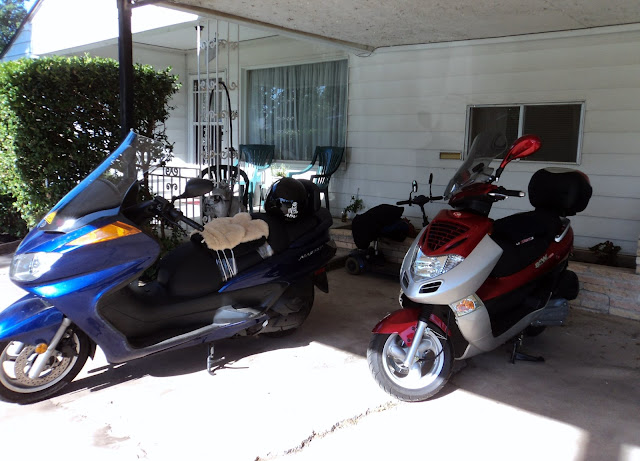 Scootard was getting things ready while I wrestled with my gear in the house.  Ms Vickey acted like she didn't know me and didn't want to start when I sat on her.  Also, my seat had gone back to it's original condition which made the airhawk that I had purchased last year impossible to use.  It had me too high off the ground even after letting most of the air out.  "Monkey Butt" here I come! 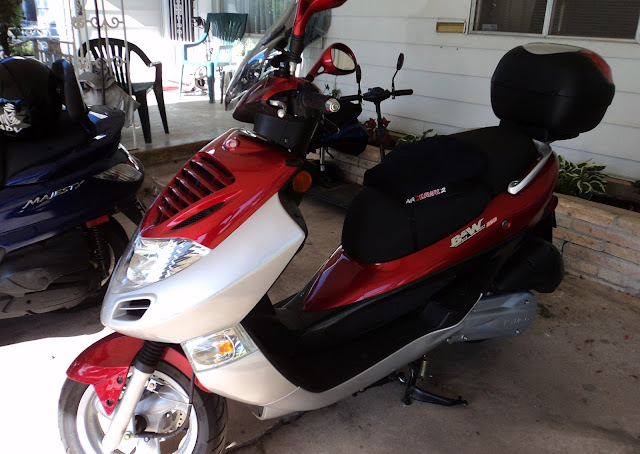 We hit the road and headed out of town toward a little town called Carnegie.  The road was flat and uneventful as always in these parts.  But I like that....:-).  I don't like blind hills, pin hair curves and nasty surprises!  I like to actually see where I'm going....haha. 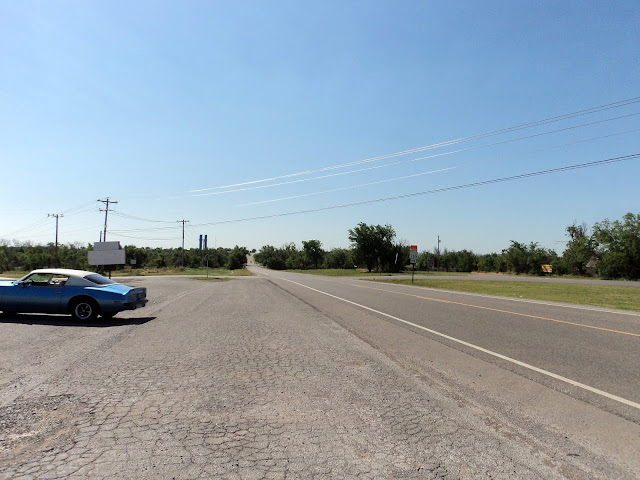 We stopped at a little cafe called Ann's Kitchen where we have stopped a few times before in our travels.  I was in need of coffee and some breakfast.... 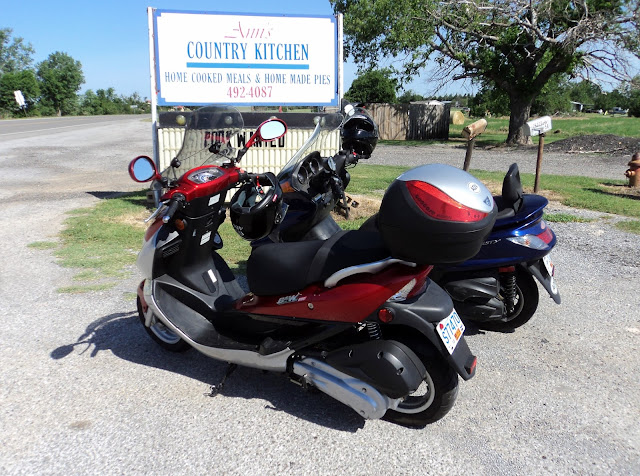 I chose a table by the door and window so that I could keep an eye on the bikes.  The  tables are covered in business cards and little brochures with laminate on top to protect them.  Cool.....:-) 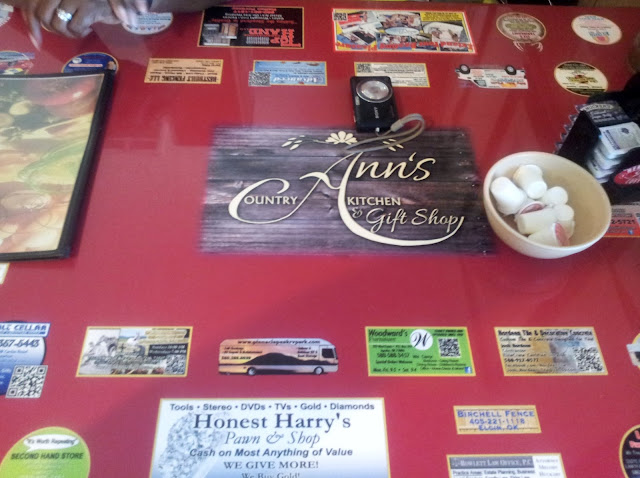 The waitress was very friendly and of course the first thing I ordered was some coffee and breakfast. 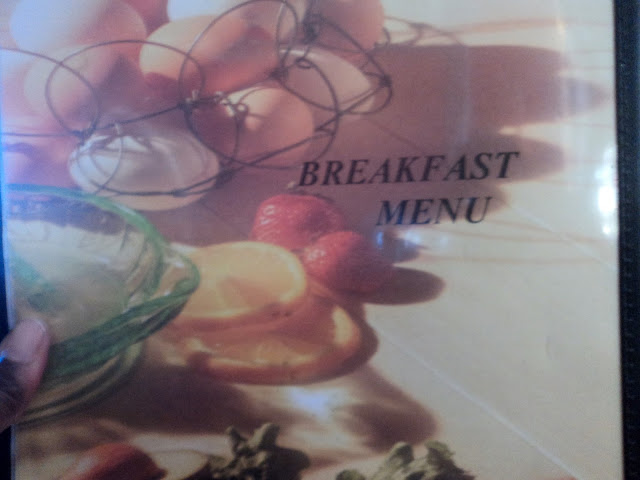 Scootard looked as if he was about to fall asleep while reading through it....haha
It had been so long since I rode that I was a bit tired too and we had only gone 25 miles or so from the house.  I think it was the heat though too. 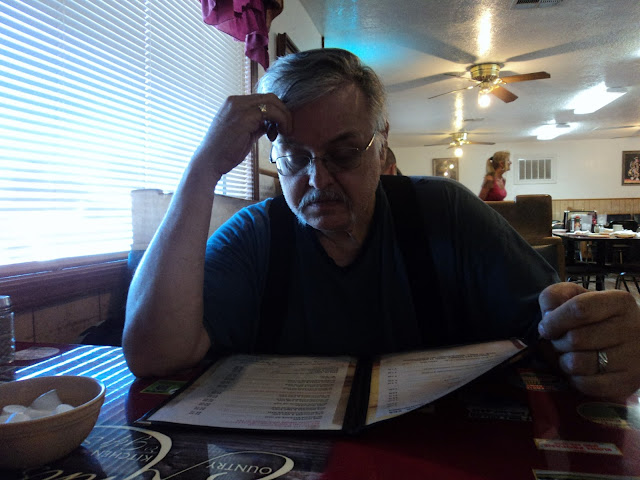 We drink our coffee from a French Press, so it is difficult to please us with restuarant coffee anymore.  It usually taste too weak.  This was one of those time.....:-(. 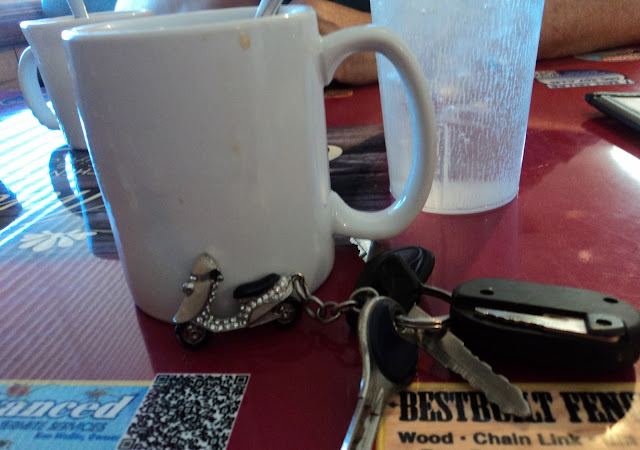 After breakfast, we hit the road and headed toward our destination again. We passed through Windmill country for a few minutes.... 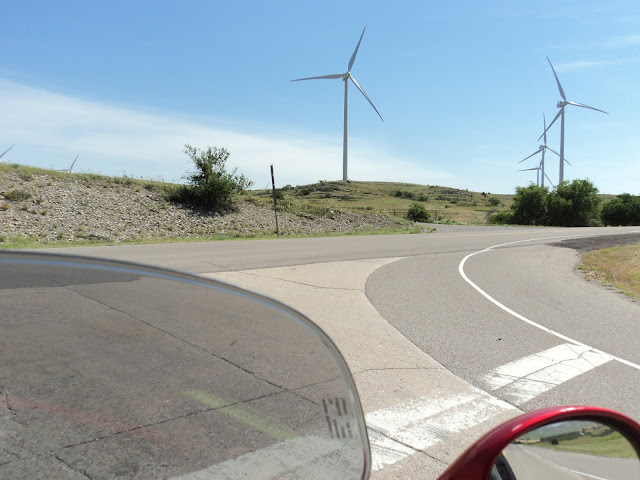 And after another 20 something miles we made it to our destination.  I had been here before several years ago (almost 15 now), but Scootard had never been here and was anxious to see it. 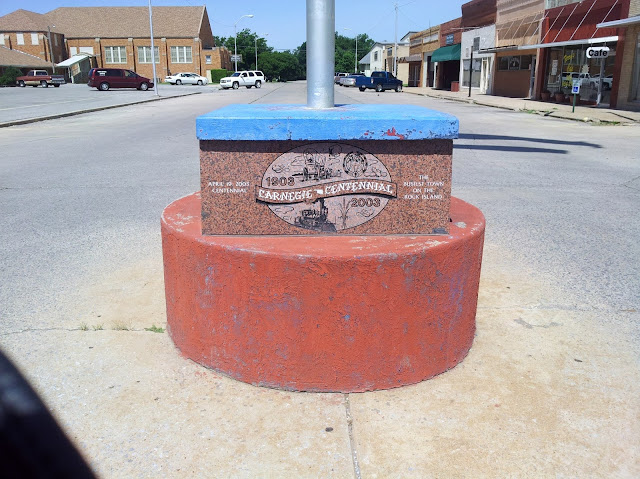 What I like about a lot of these small towns is that they always seem to put some part of their history in a mural. 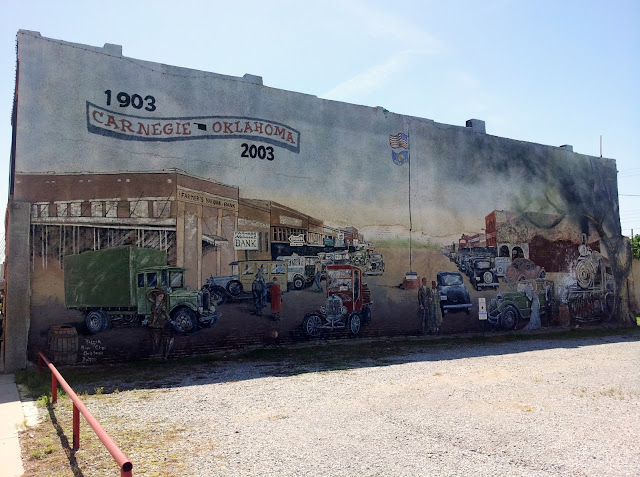 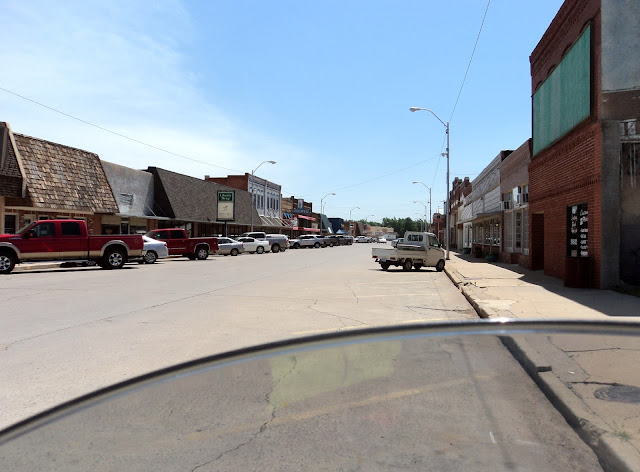 It took a grand total of 7 minutes to "see" the town center before we were on the road again headed back toward home. 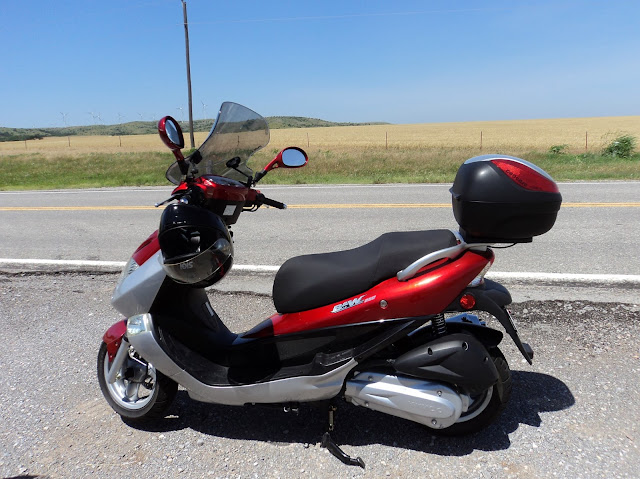 We passed an old homestead on the way there that Scootard wanted to get pictures of. 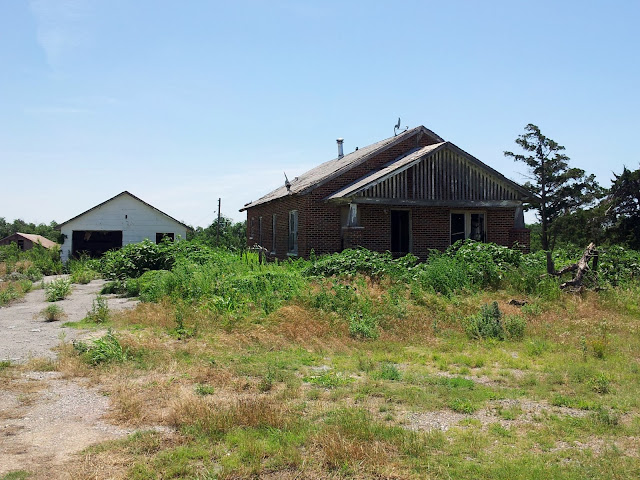 I was amazed at this flower that was growing straight up out of the asphalt in 90 degree heat.  I don't know what kind of flower it was, but after giving it a few tugs, it was evident that it was thoroughly rooted into the ground and was not going to budge.  Pitty....:-(.  I knew just where I would have put it since one side of my yard gets sun all day. 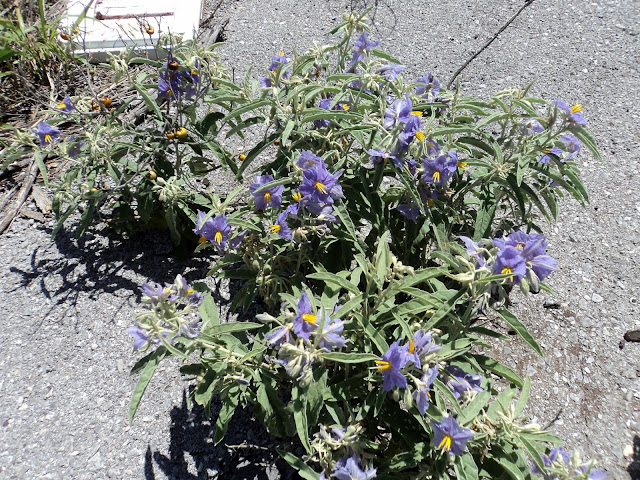 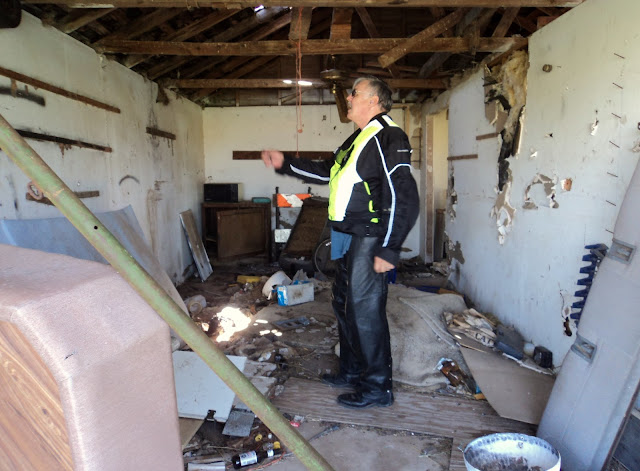 This was taken in one of the rooms that I think was a bedroom of some sort.  There was stuff everywhere in this place as if whoever used to live here just up and left without taking anything with them. 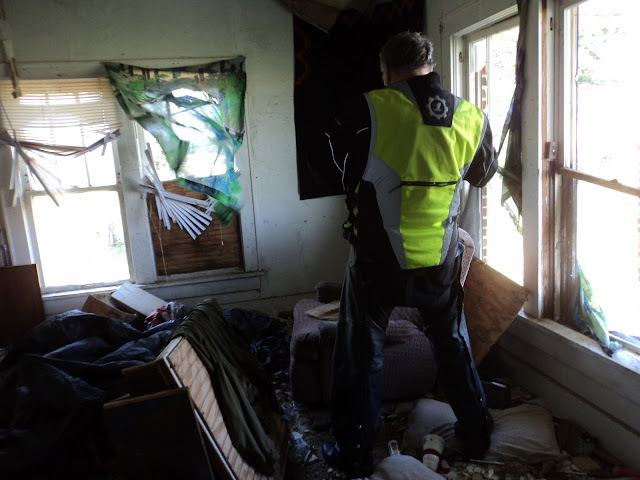 This was taken in the living room area.  I kept thinking the whole while that we were there; "there might be snakes in her under all of this stuff trying to get away  from the heat"....... 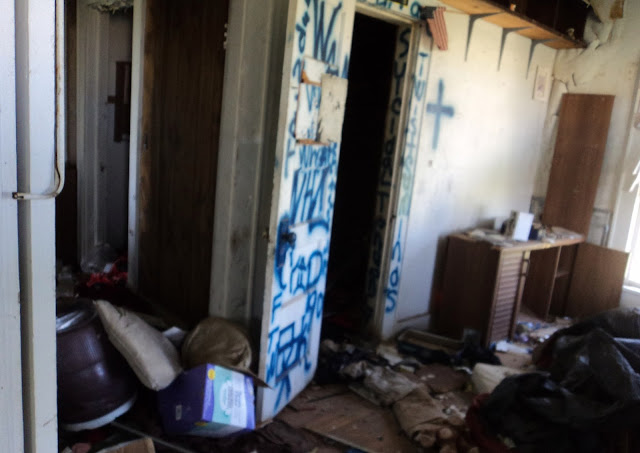 This is another shot from the living room door.  There were a lot of children's clothes and toys laying around. I wondered what there story was.  Why would a person just leave everything behind like this?  Were they on the run from someone? Did they die in an accident and didn't have any heirs?  Did they simply give up on life and walk away from everything? 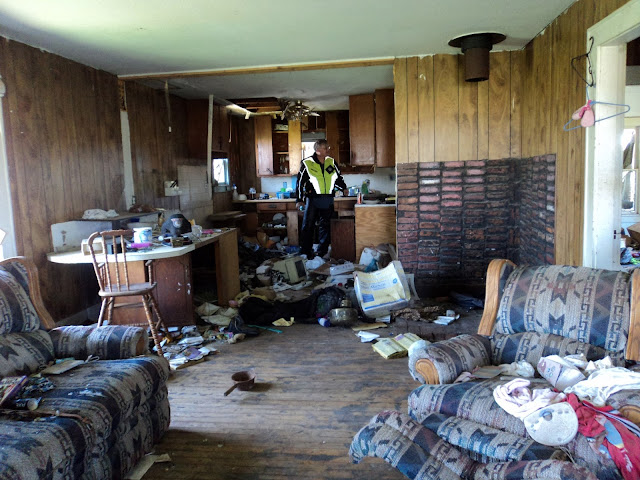 After taking our time and looking around a bit more, it was time to hit the road again. 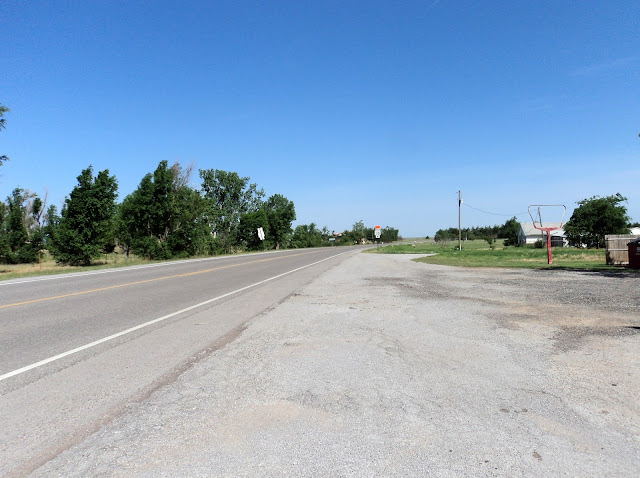 When you are on the road whether in a car with all of the windows down or on two wheels, there is always that moment when "something" flies into your eyes, hits you in the face or just takes your by surprise.  I had one of those moments when something that appeared to be a bug the size of a small bird flew UP MY SLEEVE!!!  I spent the next several minutes shaking my arm and shaking my hand and having a few interesting vocal challenges in my helmet!  I shook and shook my arm until I thought i was going to lose my balance.  The power of the wind was not helping either! 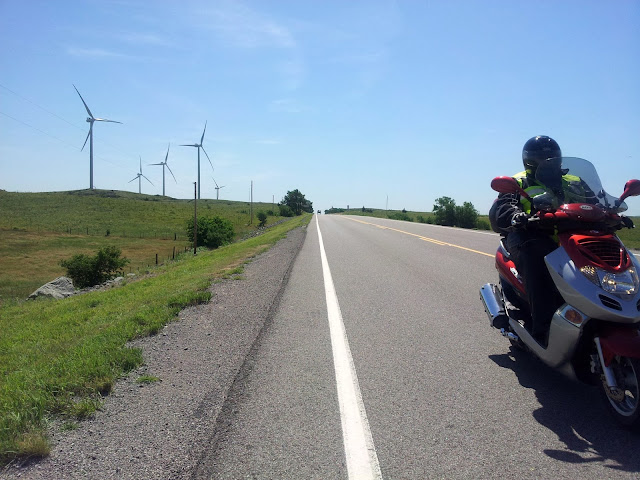 After returning back home and stripping off my gear, we found this thing which had a wing span of about 4 inches. It had come apart in "transport" inside my gear...... 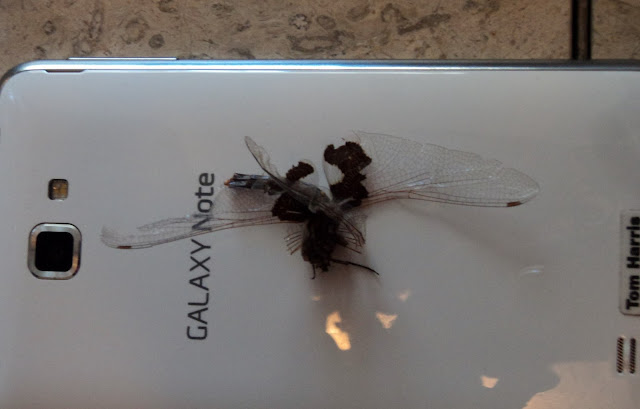 I, on the other hand came apart when I saw it!  hahaha......I promptly headed for the shower and washed off the grossness of the whole incident, settled into a chair with the Gatorade and thanked God that the thing did not bite or sting me!

Here's to keeping the shiny side up!