I have no idea what time I actually woke up this morning, but it was early and I did not want to move.  The road can do that to you sometimes. Scootard was busy loading the car and I was checking the room to make sure nothing was left behind.  It was raining and the skies were looking ominous again. 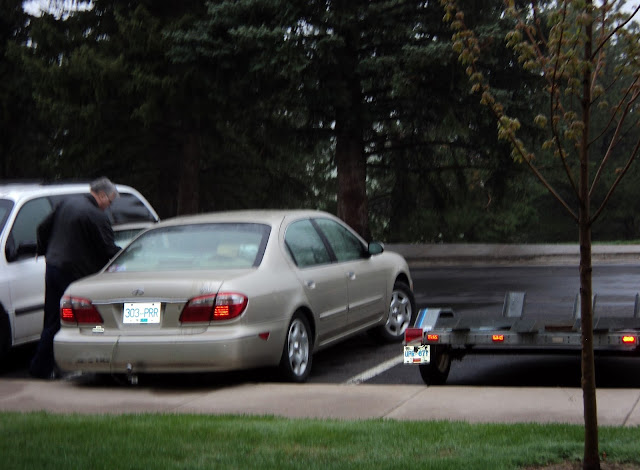 by the time everything was loaded and we were settled in,  it was later than usual. 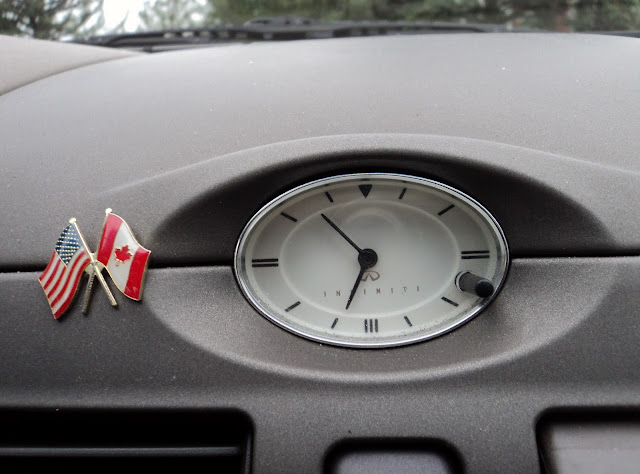 The fog was so thick, I was concerned about us making good time trying to leave town. 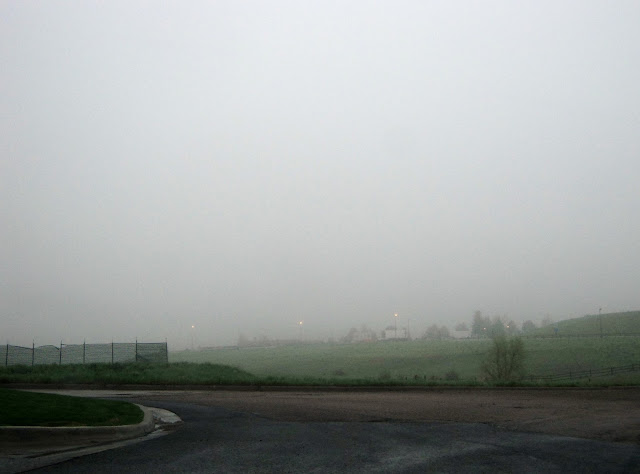 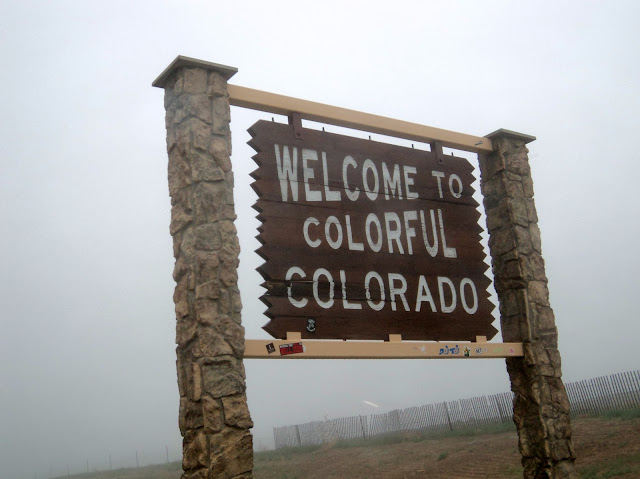 And the fog did not let up....I was nervous; "white knuckled nervous"...haha  Scootard was cruising long just fine.  :-) 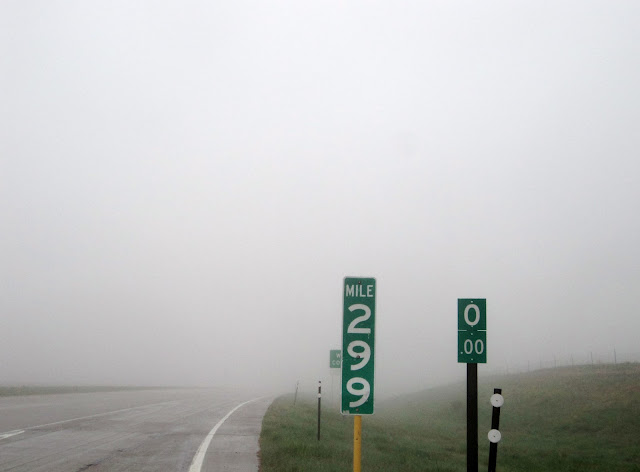 After a while things started to look a bit better, but I was doubtful that it would hold for long. And having that much "nothingness" to look at gives you a real good perspective of what might be ahead. 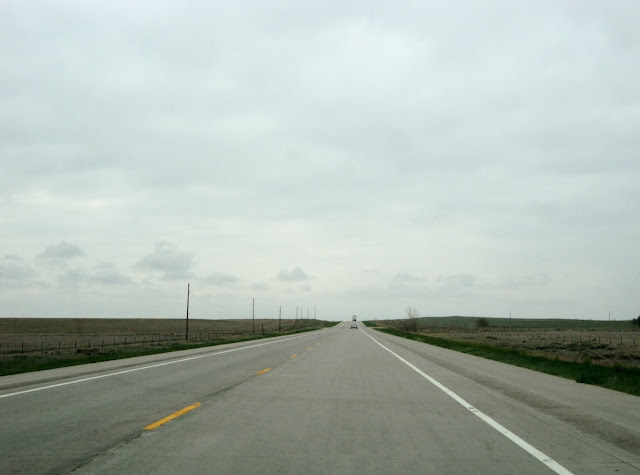 When came upon the tiny town of Hugo, Colorado and visited this antique shop where we met a wonderful lady by the name of Linda.  She informed us that a grand total of 840 souls lived in the tiny town and that most people who leave always come back to live. 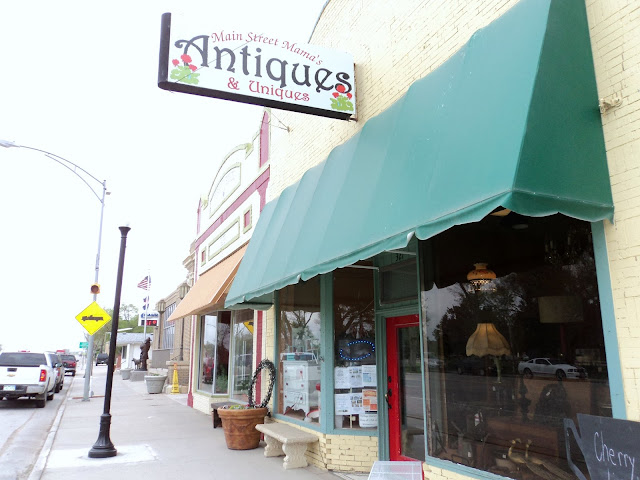 After our hour visit with Linda, we got back on the road and headed for more "nothingness".....It's amazing how much of that there is.  And how flat it can be.  Chris thinks if your dog every ran away, you could see him going for at least four days! haha 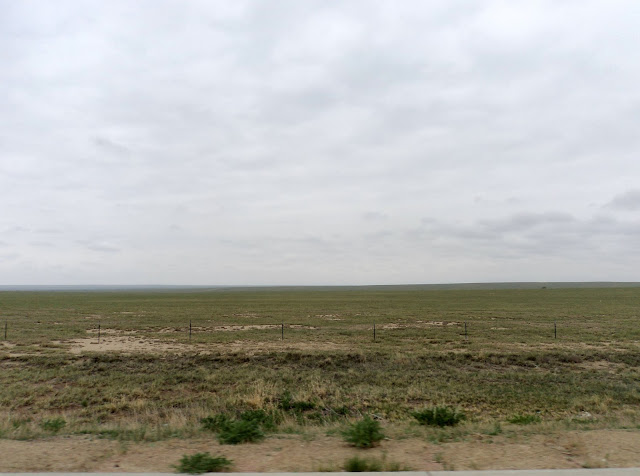 It was time to gas up and grab a bit to eat...We didn't eat here after seeing the "deli" menu and decided to keep moving after getting our gas. 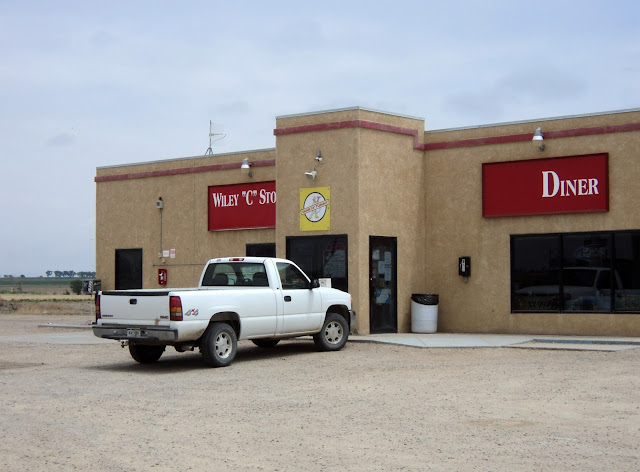 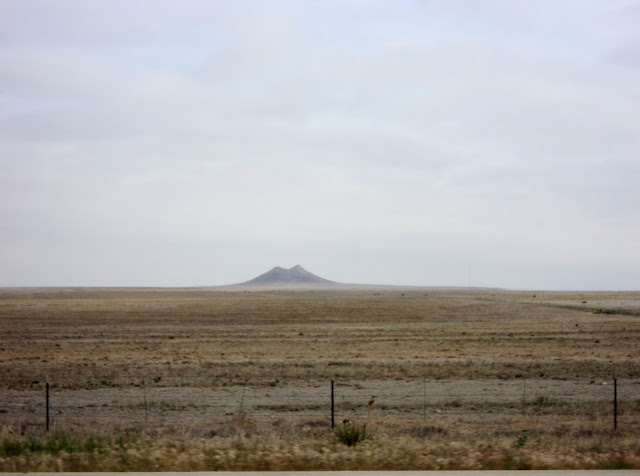 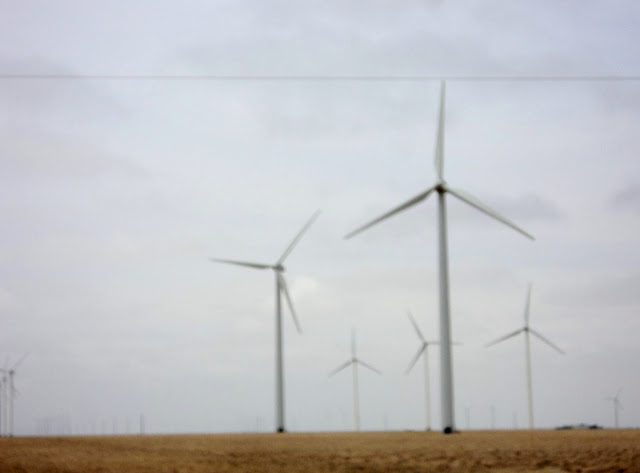 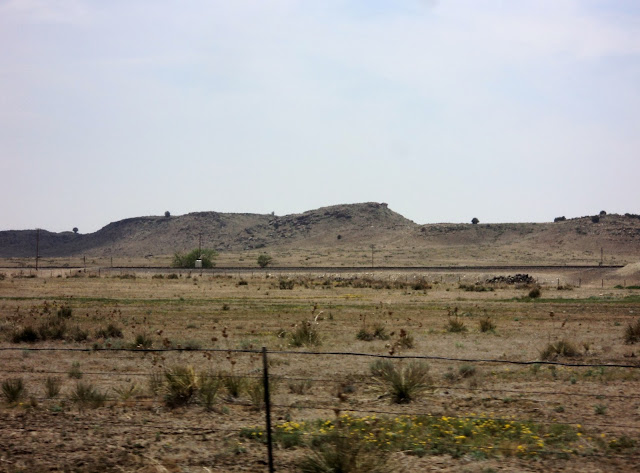 We got to the Oklahoma Panhandle which was weird because we were only traveling through it for 34 miles.... 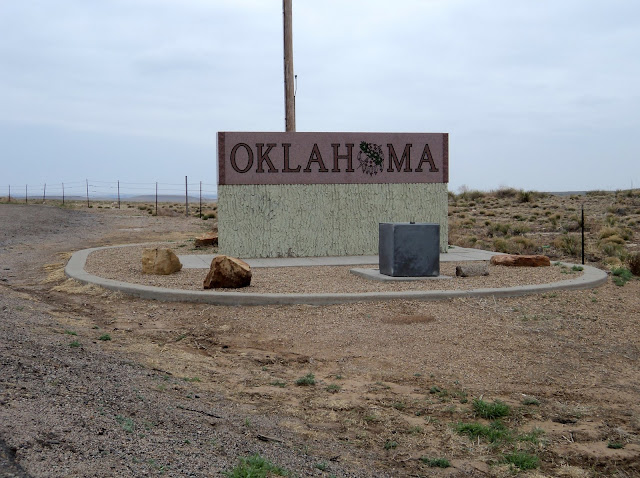 and then we were back in Texas going through. the panhandle again.  Sorry about the blurr. It happened so quick, I had to pull the picture from the internet...ha.

But all was fine since we happened upon another antique shop. 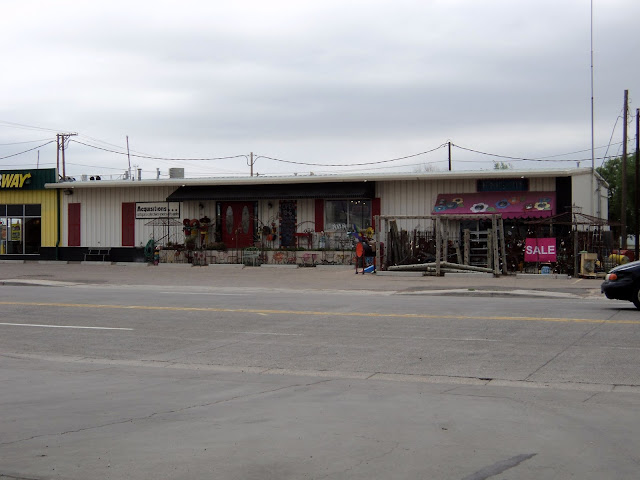 I managed to snag a couple of topiaries for the garden in Oklahoma....:-).  I looked for a replacement bench but couldn't fine one....:-(.  These were the only topiaries frames I have seen that I like. 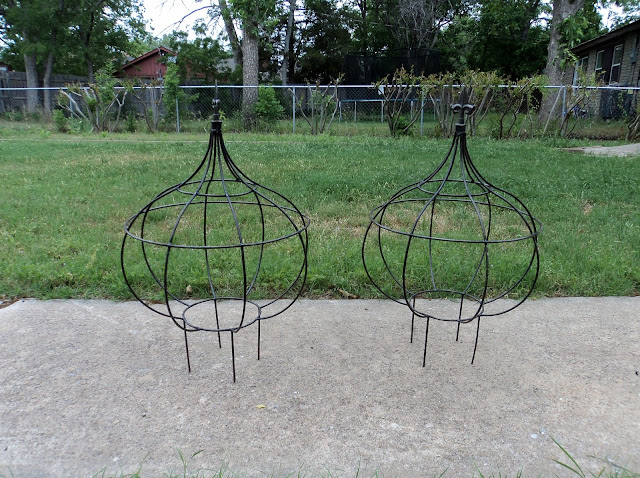 After my score on the garden accessories, we hit another patch of unfavorable driving weather.  This is the view from my window. 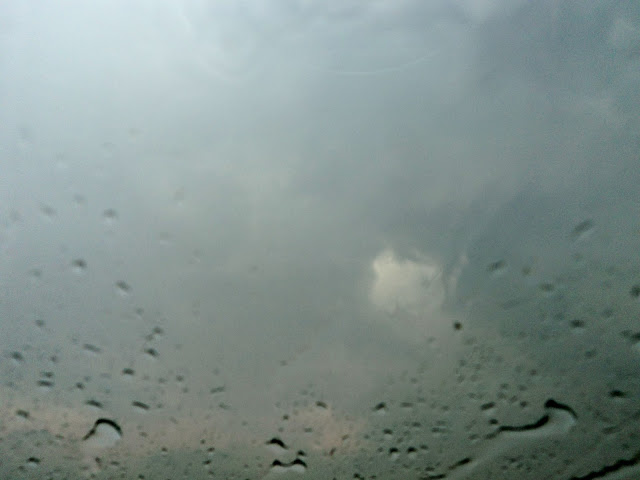 Once it clear up again, we were able to see what was around us just off the highwaay.... 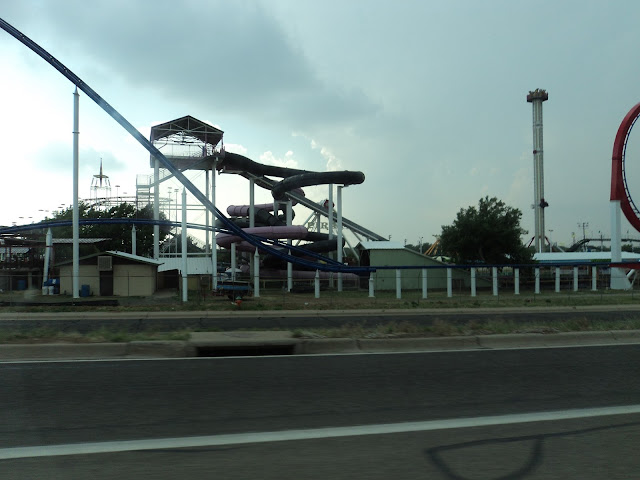 You know you are in Texas and Oklahoma when you start seeing red clay dirt....... 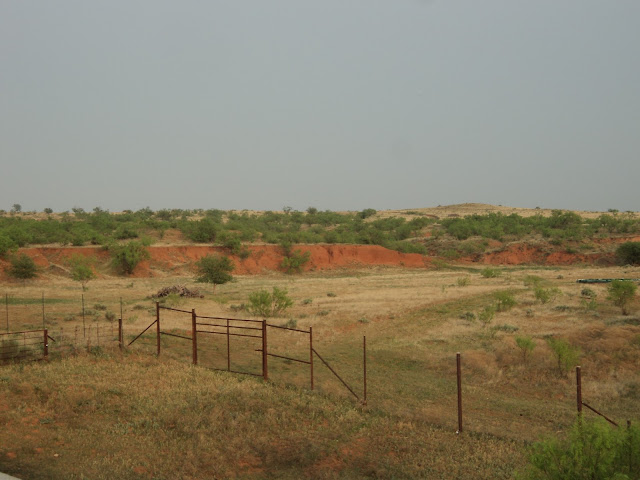 The day was coming to a close after 8 hours of driving (or so I thought), when Scootard decided "hey! we're only 4 hours from home".  So, you know what that meant!   We took some pictures of the sunset and set our faces toward the close of the trip. 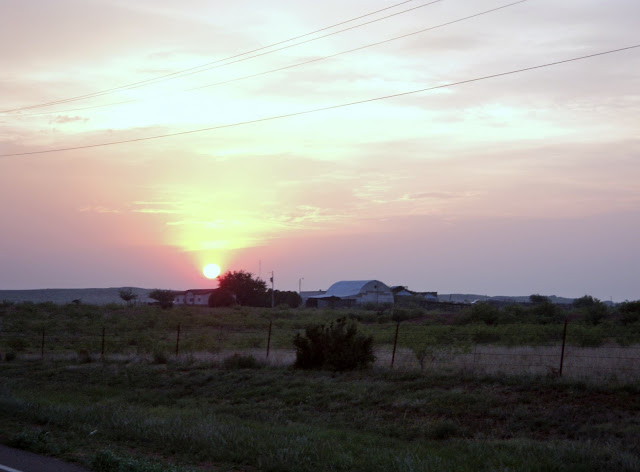 The dark it got the more beautiful the sky became.....:-) 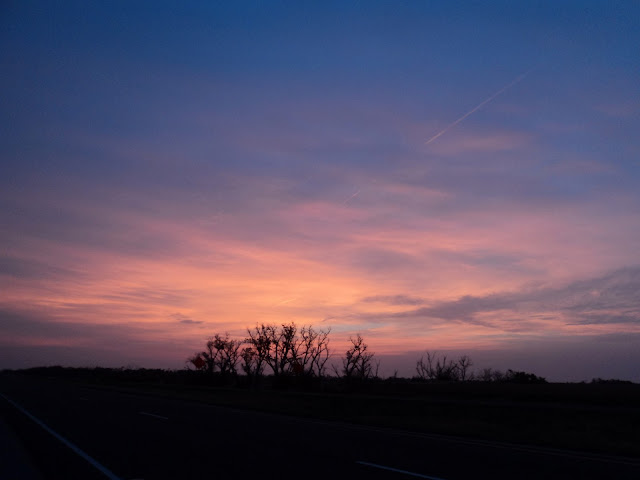 Four hours later (14 hours on the road) we were safe and sound back in Oklahoma.  Scootard was filled with Glee when we uncovered "Maj" for the first time in 2 months. 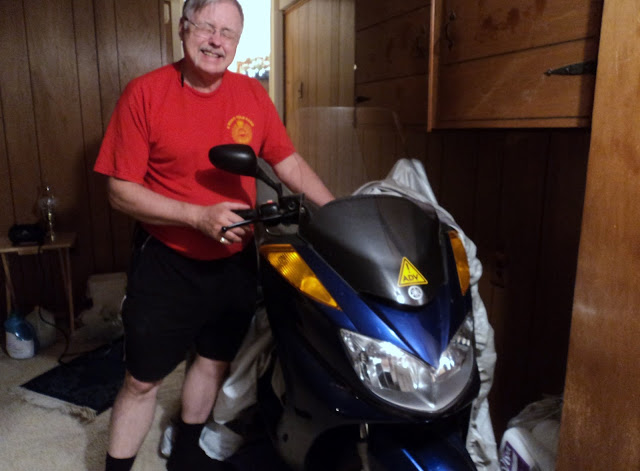 And I was quite happy to see Ms Vickey again even though she was covered up with plants and things....:-). 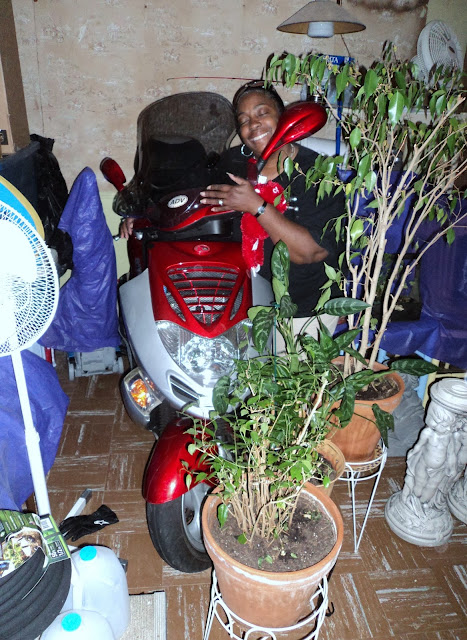 So, my friends... this brings this travelogue to a close.  We arrived at our destination 2 days earlier than what we expected, missed a major storm in Texas by minutes and didn't kill each other after being in  the car together for all those hours! hahaha.  Thanks for coming along......:-).

We will see you next time!
Posted by Tripping Sister! at 11:02 AM 4 comments: