We got up early this morning, 6:00am threw the sheets and towels in the washer and dryer, said our good byes and hit the road!  We wanted to get a good head start before it started cooking outside.  I have found that I do not tolerate heat that well since living in Canada for the past 4 years now. 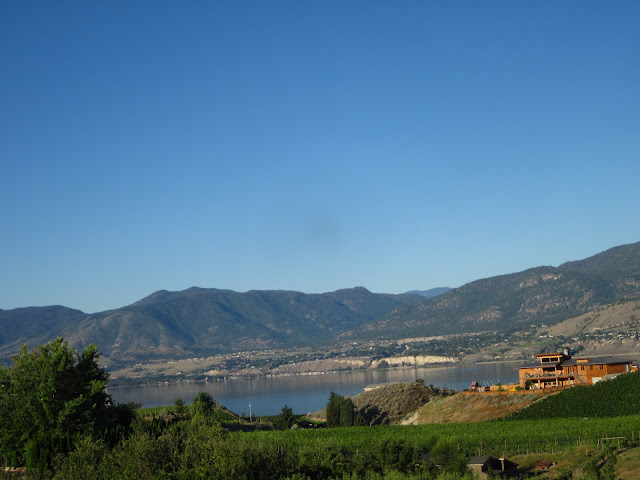 These are Naramatta Road in Penticton... 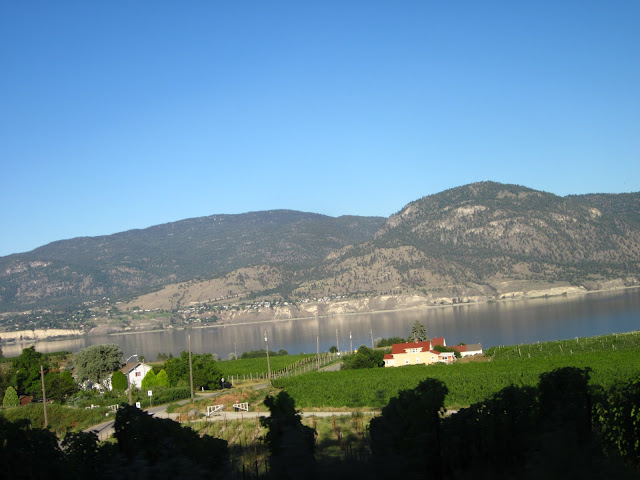 We traveled on until we got to Yellow Lake between Penticton and Keremeos.....I happen to see this Blue Herren bird sitting on the dock. 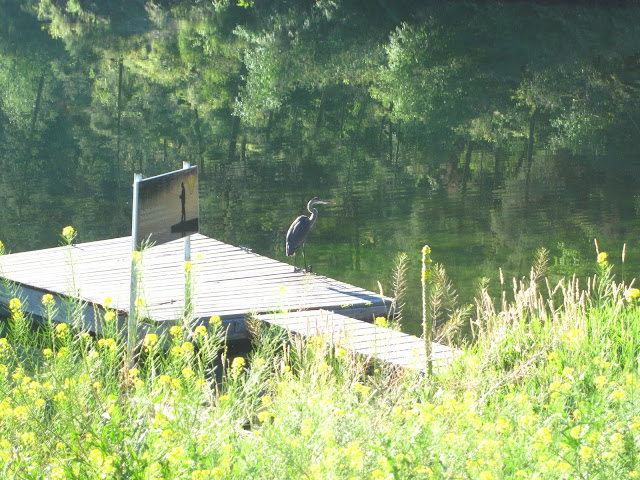 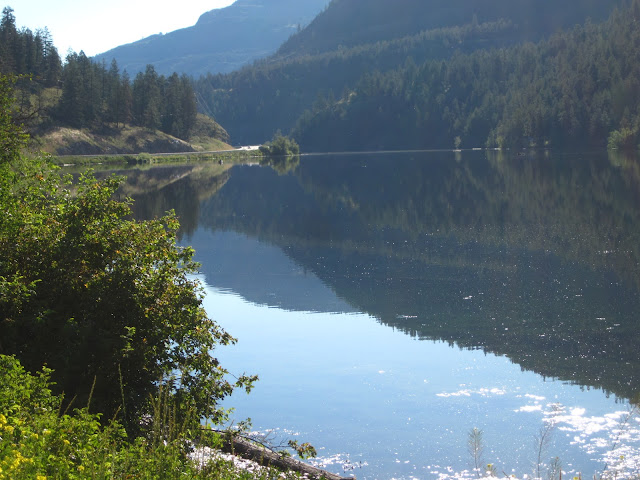 We stared at each other for a few minutes and then I proceeded over to the restrooms; which happened to be CLOSED!  WHAT!?? 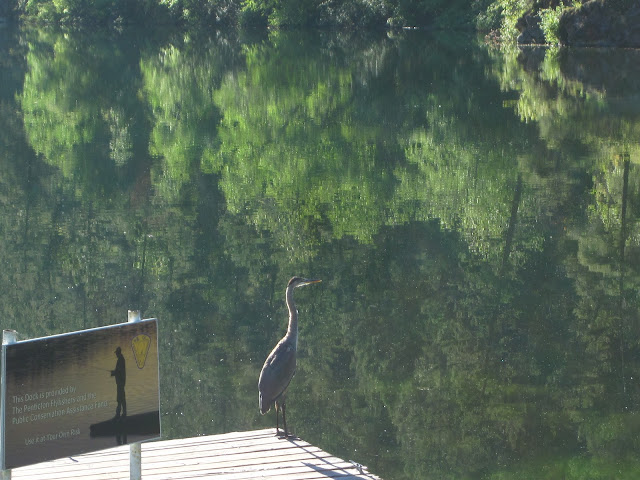 We continued until we got to Hope, BC where the famous (if I can use that word) Hope Slide took place killing several people.  Some of which are still intombed in the rubble after 40 years.....:-(.  Very sad story that moves me everytime we pass through the area.   The pictures do not do it justice as the whole side of the mountain slide down and pushed its way clear to the other side of the highway.  As a matter of fact where the slide is now there is no more highway.  The one we travelded on had to be built on top of the slide to give travelers access to the neighboring towns... You cannot really see the write up on it from this picture, but I'm sure you can google it and get the information if you want to know more about it.  It's very sobering.... 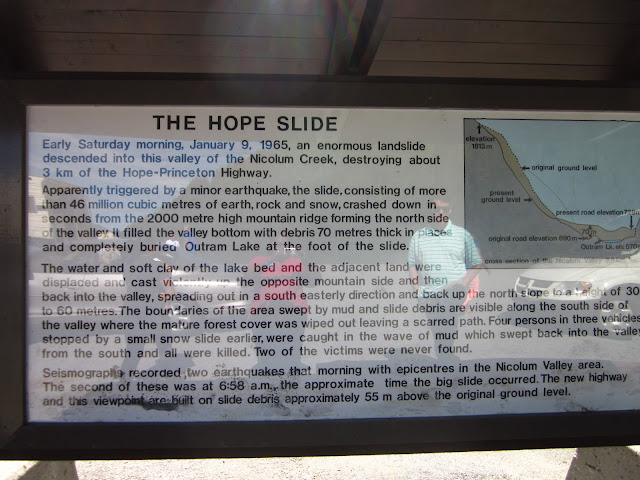 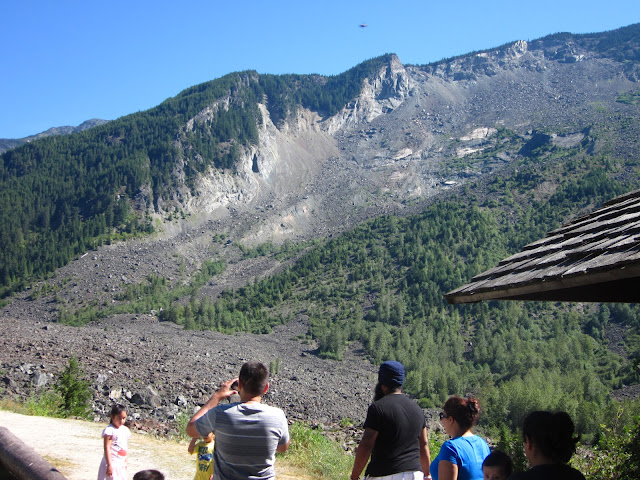 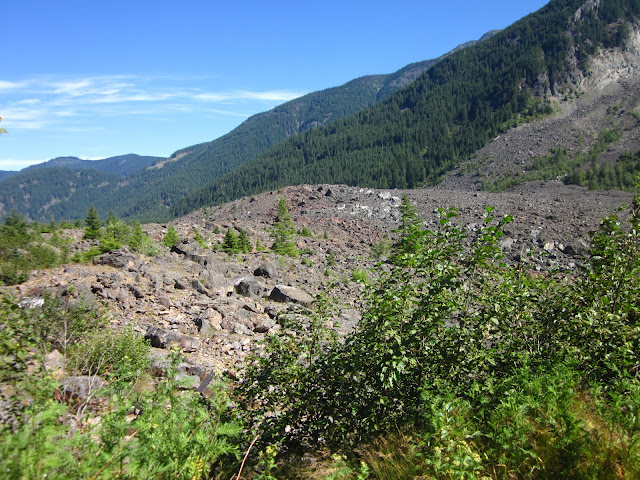 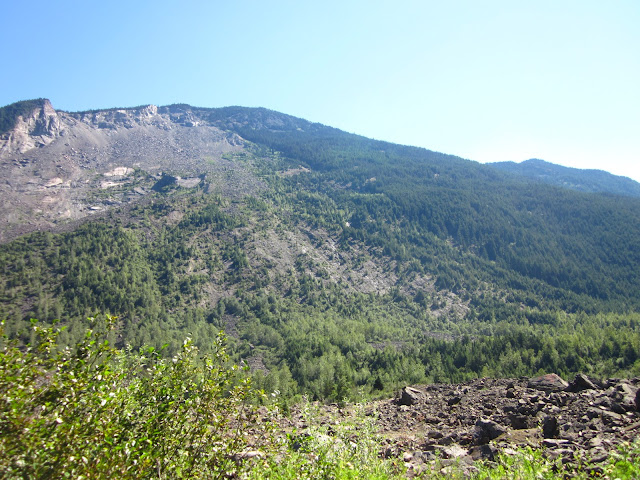 I decided to use the rest room while we were there since the last one was out of order. 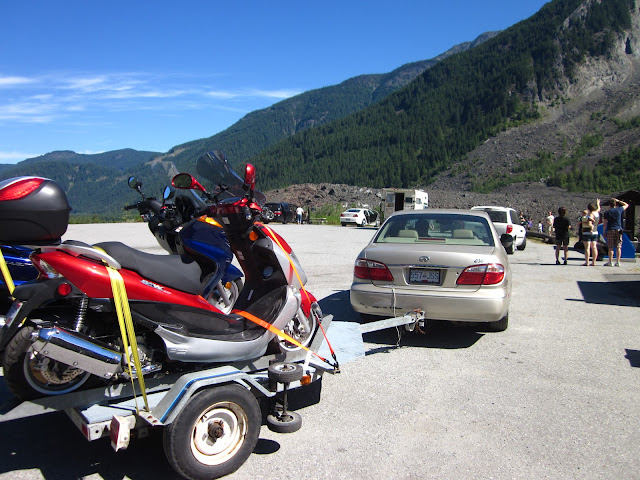 Then we travel on toward home finally arriving at about 2:00pm.  Tired but ready to plan the next trip! 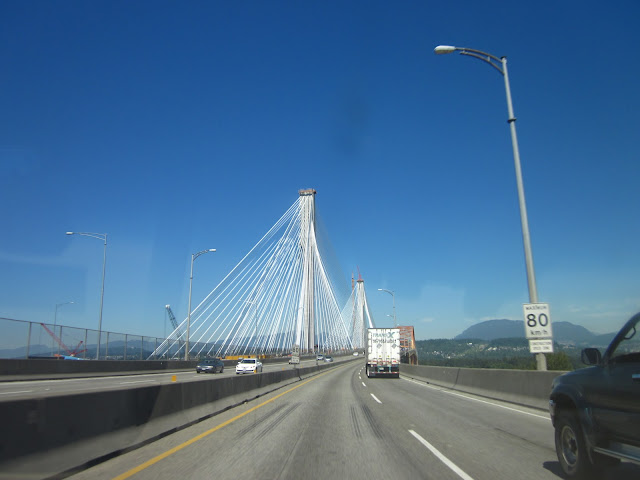 Thanks for coming along!

The Last Two Days of our Trip

I didn't post last night as I was sore and slightly traumatized from what felt like an horrific fall off my bike when going up my mother in law's drive way.  Her drive way is very steep and gravely at one section which I managed to hit and get tossed from my bike.  It was not a long fall or drop, but at my age... I'm certainly feeling it today!

So, these pics are from the market that I mentioned yesterday and from the scratches that I have managed to put on "Ms Vickey".  She took it like a champ though.  As soon as Scootard got her and I back on our feet, she started up again.  Actually she never stopped running!  I told him to shut her off as I didn't want gasoline to spill out onto me.  I have been told that there are only two kinds of bikers.  Those that have fallen, and those that will!  After 4 bikes, I have finally fullfilled my biker obligation!

It certainly got crowded really fast.  So, we walked the market at its length, but decided not to buy anything since it was so hot and we weren't sure we were going right home. 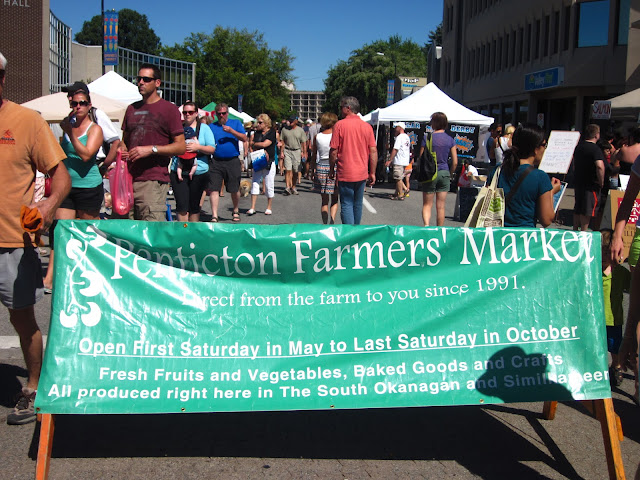 Scootard was trying to stay out of the sun!  It reached almost 100 degrees in Penticton and it was sweltering too.  It was so dry that I started to have slight nose bleeds.  Nothing serious.  just too dry! 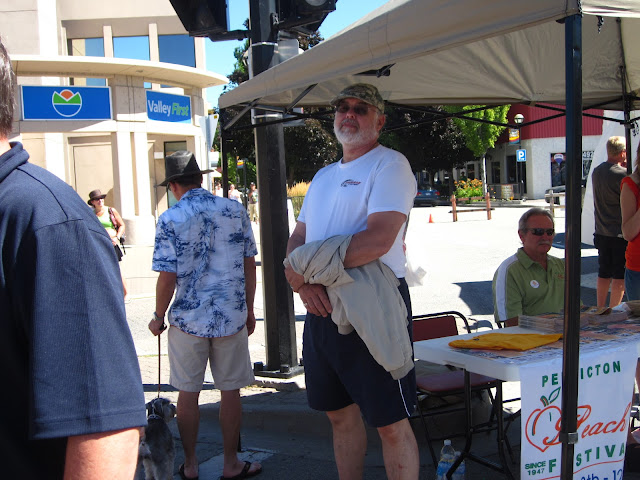 They had live music....I find the music very strange in Canada...ha.  So does Scootard and he's Canadian! haha 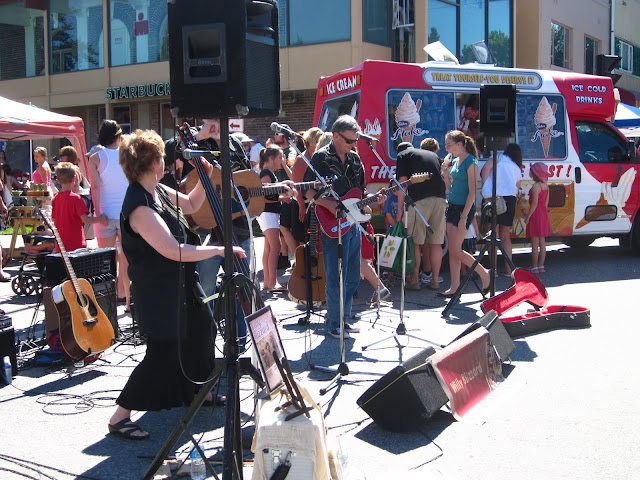 I was tempted to get some of this food until it looked exactly like the food in the Croatian resturant!...:-(. 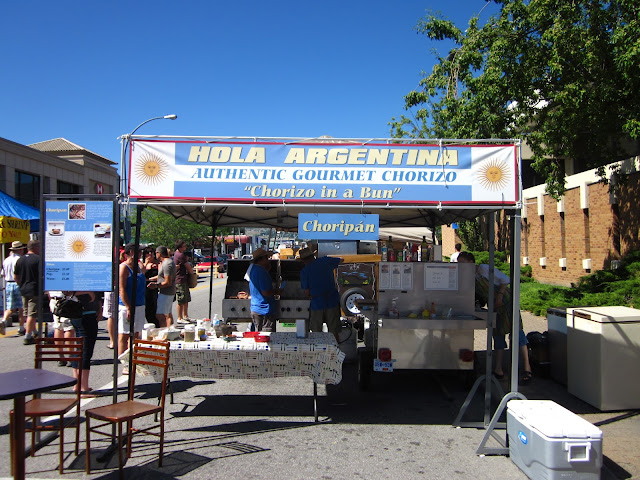 So, we kept going and at the end of the block, we found a little bistro place that specialized in cup cakes but made specailty crepes!  YUM!!  I had a crepe that was made with Brie cheese, ham and spinach and Scootard's was made with Prosciutto, pesto, cheese and spinach.  We shared a mango, pear, peach slushy...:-). Scootard ate his food like he was mad at it!  haha 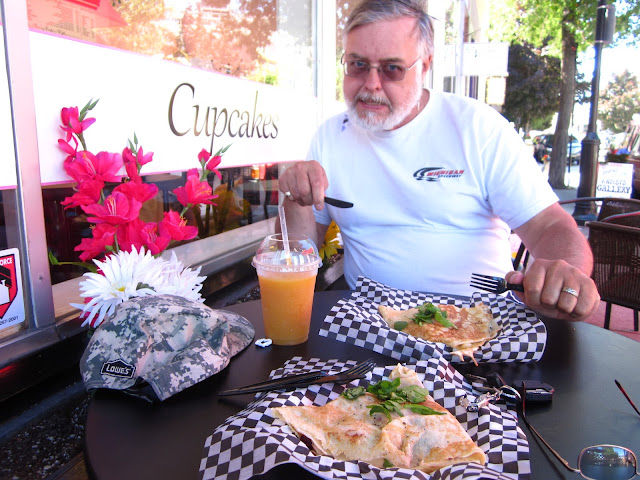 Then we went home and I attempted to go up the drive way that I had convinced Scootard to take my bike down that morning.  I knew it was beyond my skill level, but I wanted to give it a good try...... 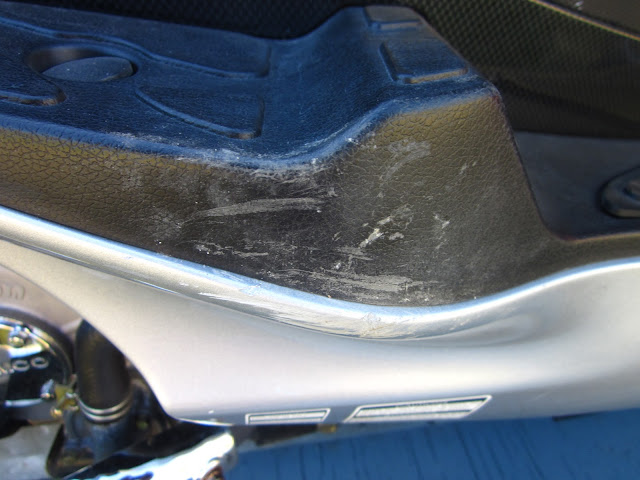 That is what was once a very beautiful, unscratched mirror housing.....:-(. 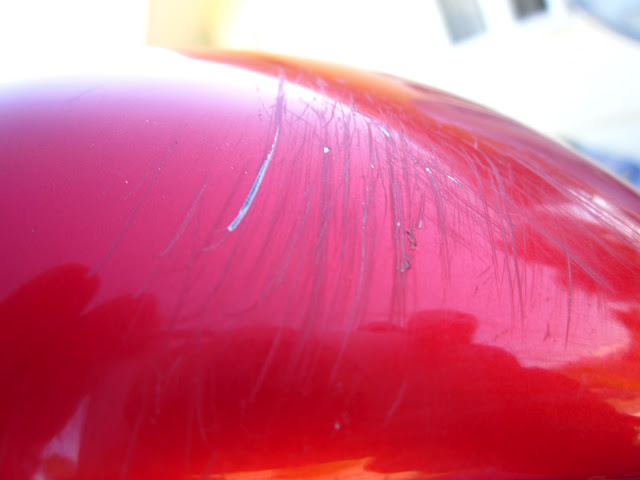 You cannot tell from this picture, but this stretches a good 6-8 feet across.  Scootard rode it like a champ.  Me.....not so much.  I went flying off when I hit the gouge just before the grass.  It is about 3 inches deep....I slowed down and tried not to hit it too hard; which was apparently my mistake.  Also, I am told that I needed to approach it the same way I would have rail road tracks......  I just didn't know that.....:-(.  Poor "Ms Vicky"..... 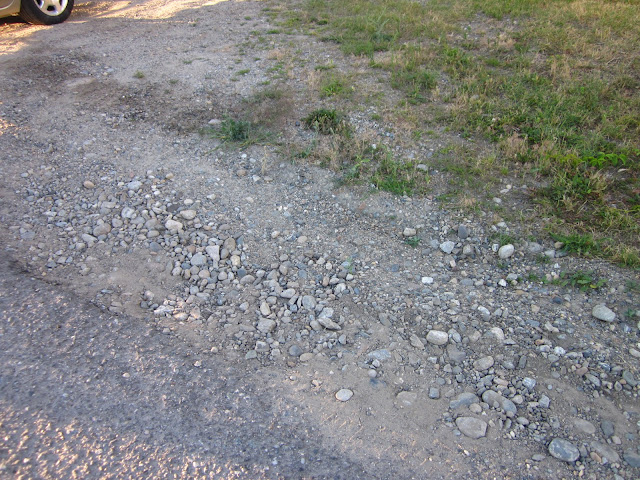 Scootard put the bikes back on the trailer since we were leaving in the morning.  I took this last picture of her once she and I both calmed down a little...... 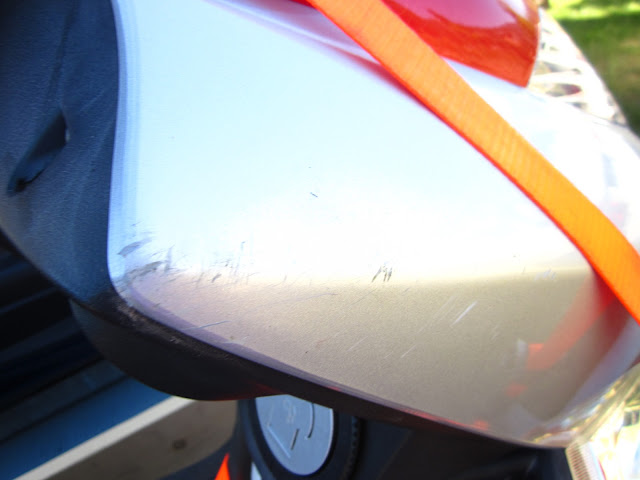 You can see part of the drive way from hell!  haha.....A dirt biker's dream I guess.  I on the other hand can do without all of the dirt! 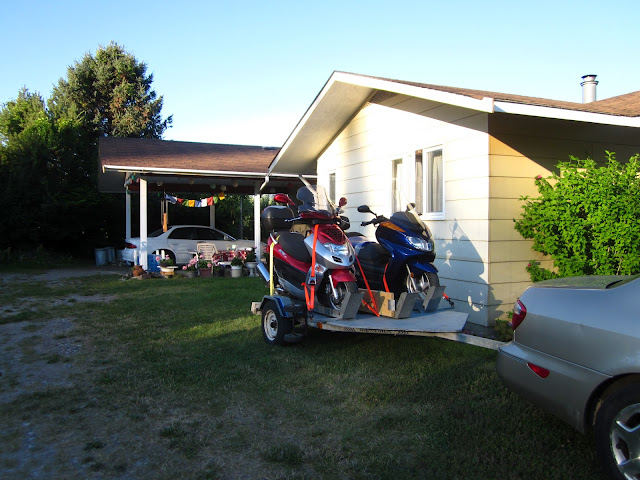 I went in the house, took an anti-inflamatory...cried and went to sleep for an hour....ha.  Woke up, ate dinner and went back to bed.