When you have to do as much pre work as we have had to, you will most likely need a break somewhere in between the road and the drama that can unfold before a long trip.  We decided to take a quick trip out of town for dinner and some down time before starting our long road trip.

This is the view from one of my favorite places to eat......:-) I shot this through a window that was not the cleanest.  So, sorry for the lines and smudges that you may see. 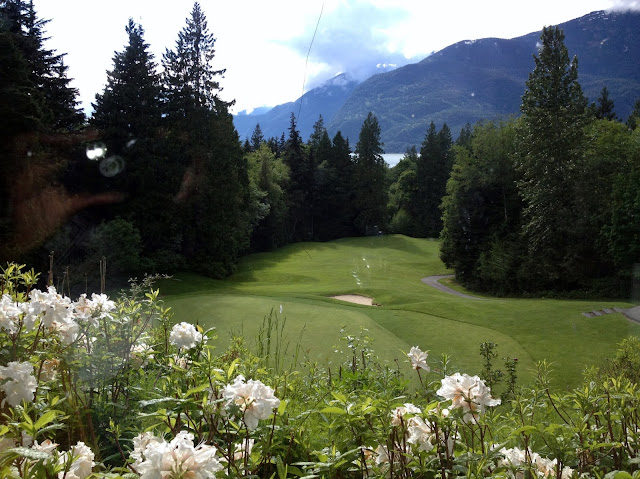 There were only two other couples there who were dinning outside.  I found it a bit chilly to sit on the deck, so we had the whole inside to ourselves....:-) 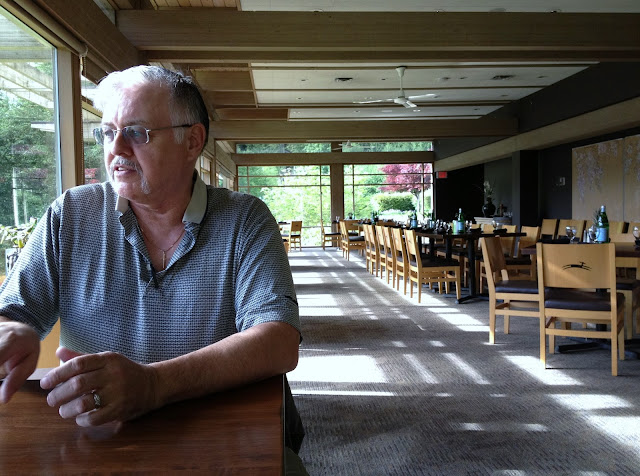 They were also preparing for a wedding the next day and it looked quite striking....:-) 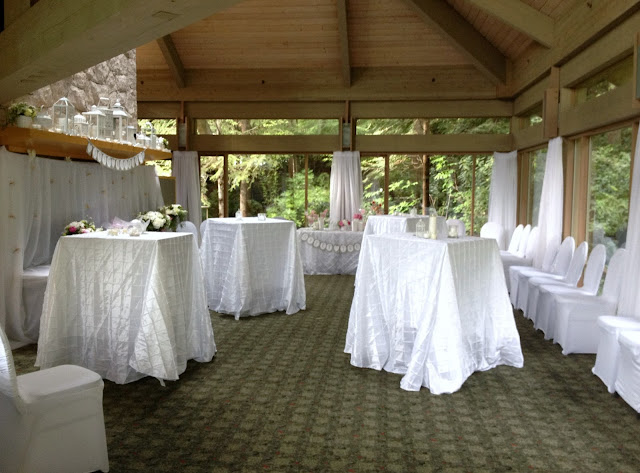 We have often spoken of having a view like this from our bedroom window.  But then I thought with a waterfall right outside like that, I might be up running to the bathroom all night!  Bad idea! ha 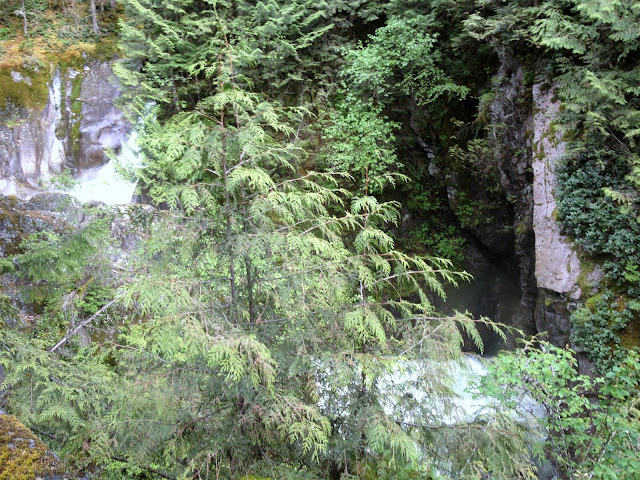 We ate a light supper and decided to head back home since there was still much to do and we would be leaving very early in the morning. 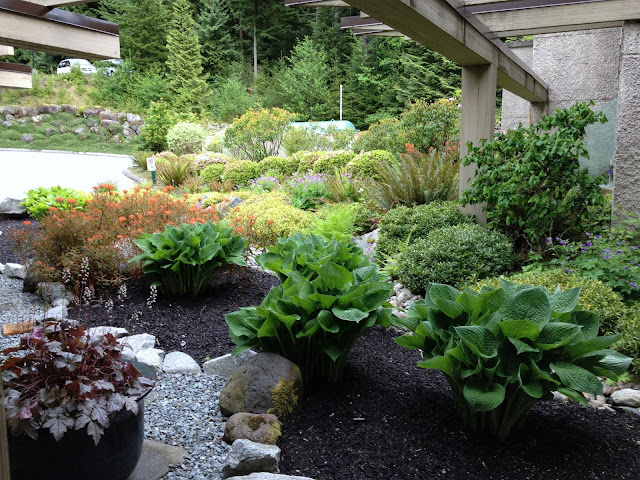 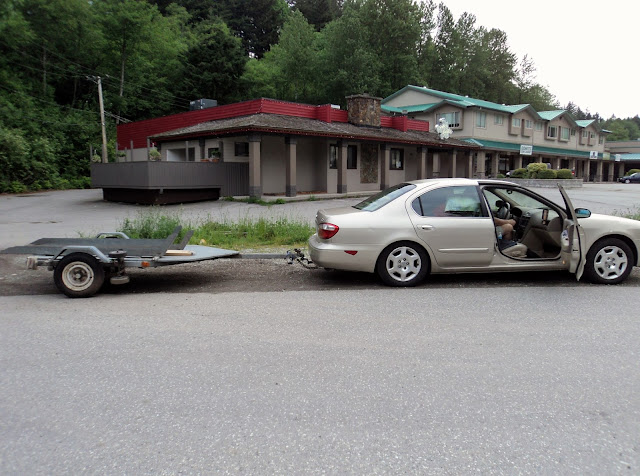 Before we knew it we were crossing the new Port Mann bridge headed toward the Canadian Okanogan..
I like the way the bridge has all of these supports....makes you feel safe when your the one crossing it..ha 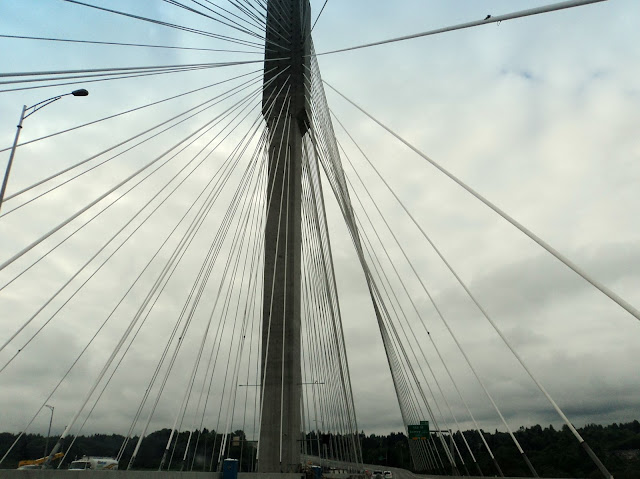 I have skipped a lit in between since I am running a bit behind in even getting this to you.  So, I have just added what I felt were the highlights of a long trip.
Manning Park......:-). 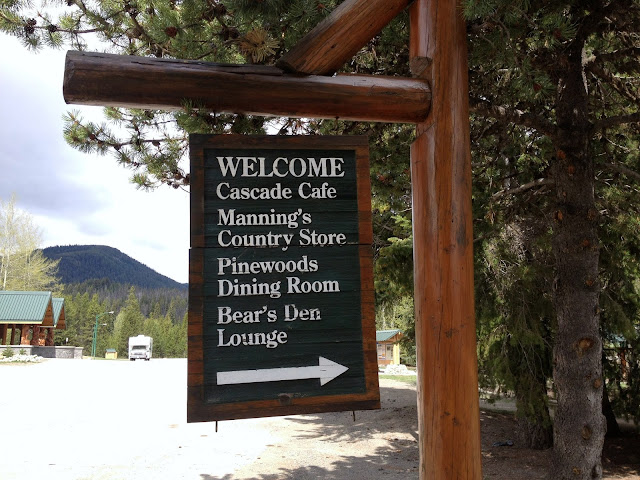 Here is a long shot of some of the property.  The last time we came through here, the snow was over my head on both side and we had a snowball fight...:-) 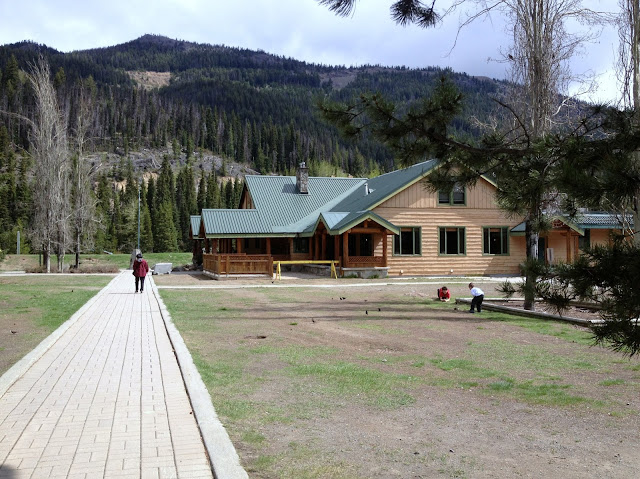 Manning Park is the home of the friendliest critters in the world.  When you call them, they come running as they have become quite spoiled by the hundreds of people that come through and feed them.  This is a ground squirrel...:-).  They scurry around and behave very much like the Prairie Dogs we have in Oklahoma. But the prairie dogs are quite ferrell and usually run if you approach them. 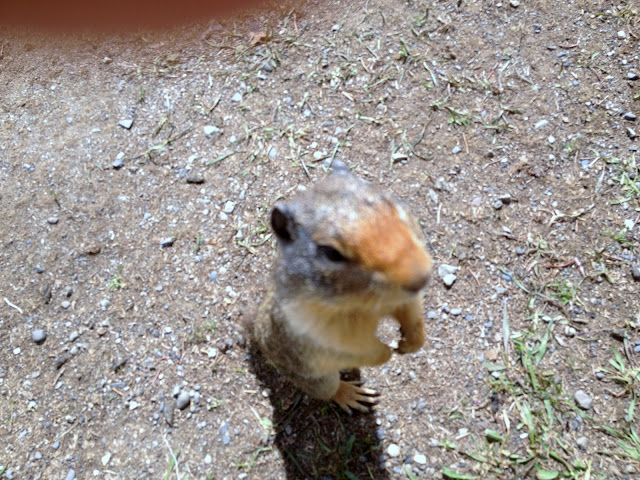 These little guys will let you pet them and will often stay there and eat while you stroke their backs....:-).  I passed on that one.  I kept thinking that they might mistake my dark complexion for pretzel or a grape or something...hahaha 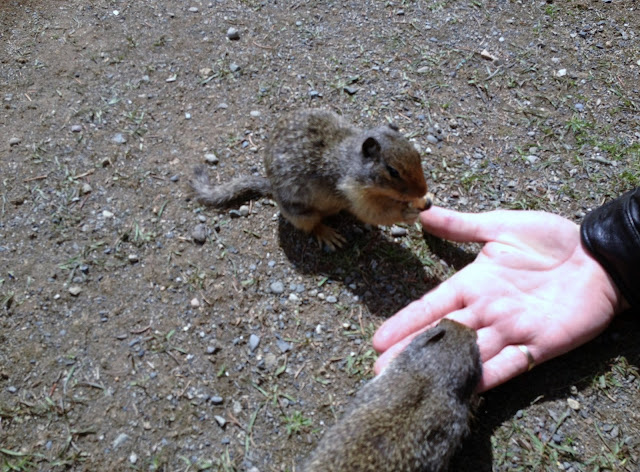 And once their friends are sure that you are not going to eat them, they come over and take the food from your hand as well.. 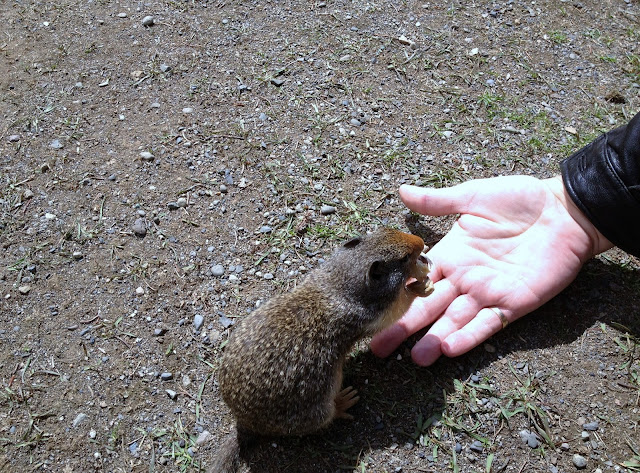 and then the birds show up.  and then a huge raven showed up.  The little birds left and so did we...ha.  He was a big one. 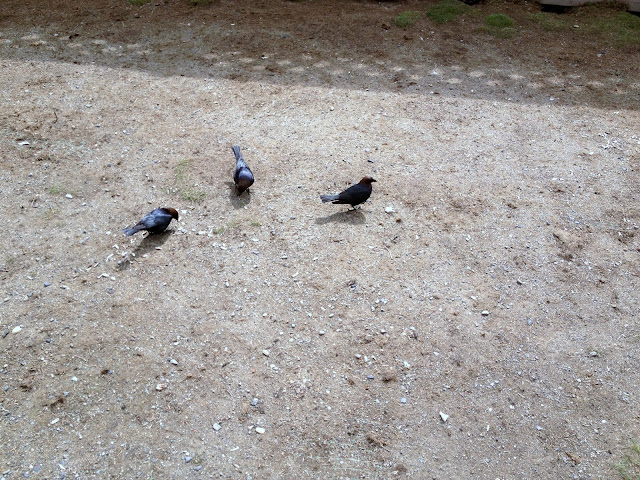 Our next stop was in a town called Princeton where we decided to get some lunch and something to drink. 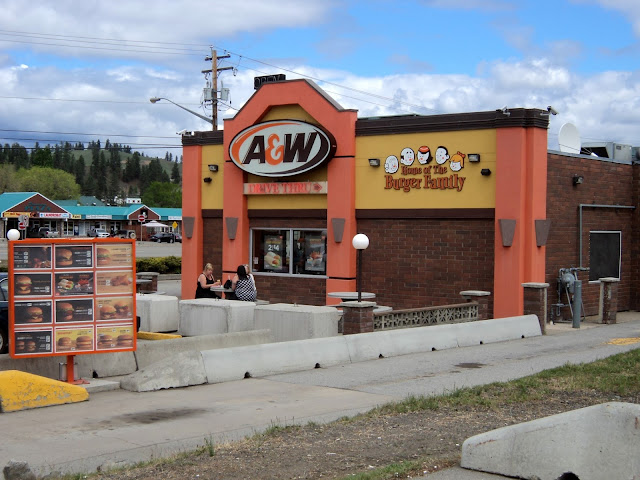 You know who was already thinking about devouring a burger and enjoying the pleasant, but cool weather...:-) 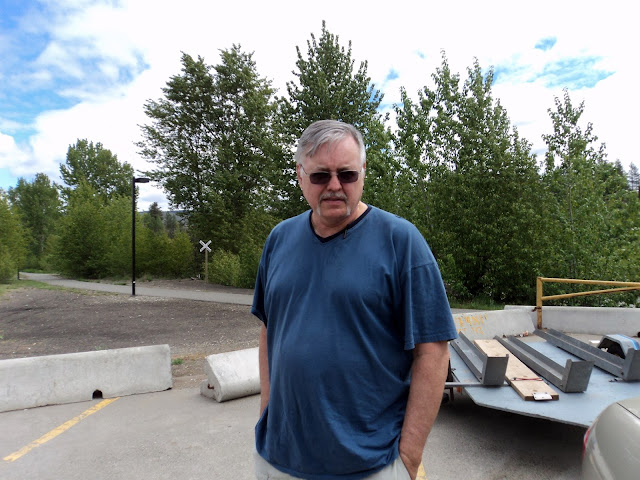 We got our much needed drinks and settled in for lunch after lunch we walked back to the car and saw a few lady bikers out for a ride. 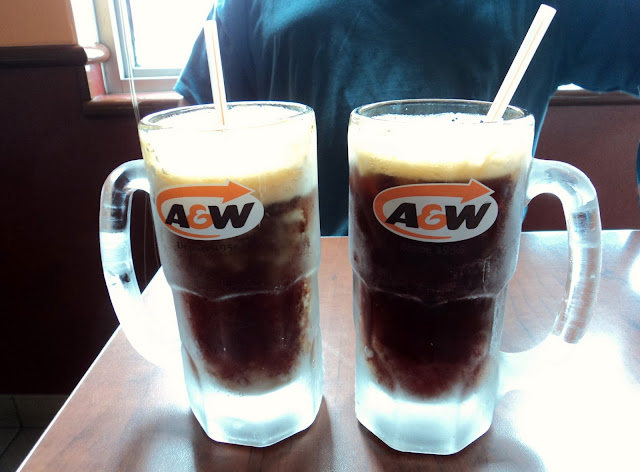 Outside of the A& W place were a group of lady riders out taking in the wind....:-). 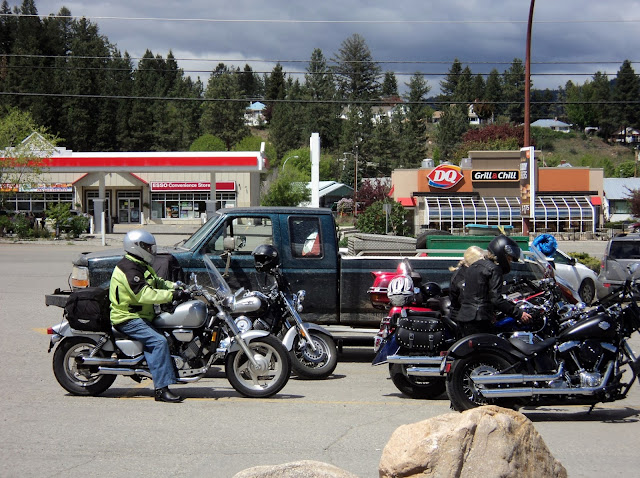 Well, there were two guys in the group but the rest were ladies.  Go girls, go! 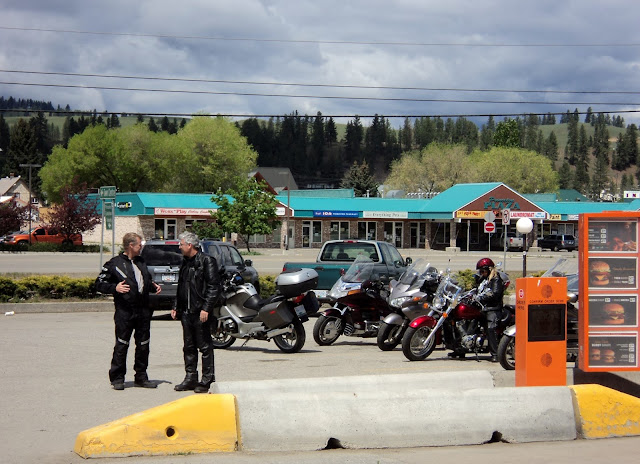 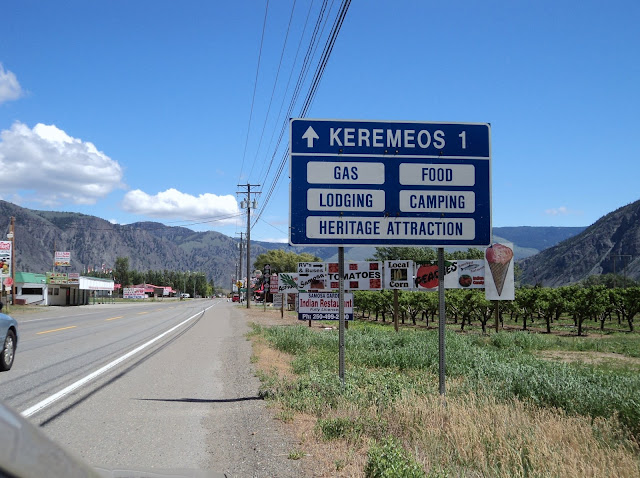 the Okanagan is littered with tiny little towns some no larger than 500 people I believe.  That's a bit small for me, but I don't mind riding through. 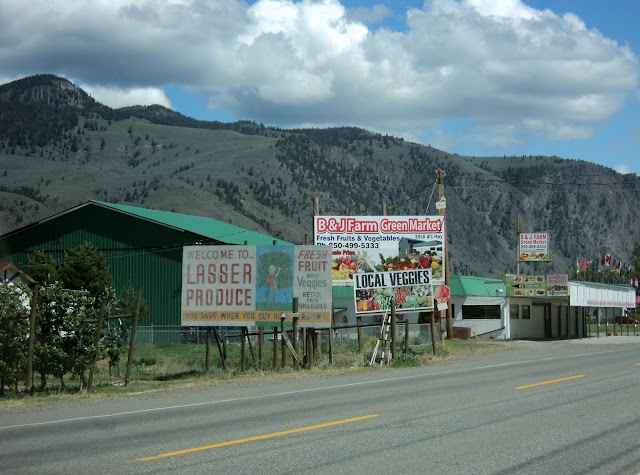 This is a shot of Yellow Lake which lies between Keremeos and the hwy 97 junction. 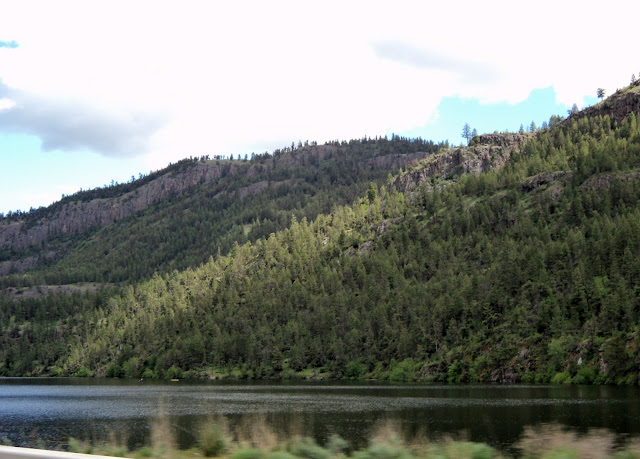 As we got closer to our destination, we rode past the long Skaha Lake......just beautiful....:-). 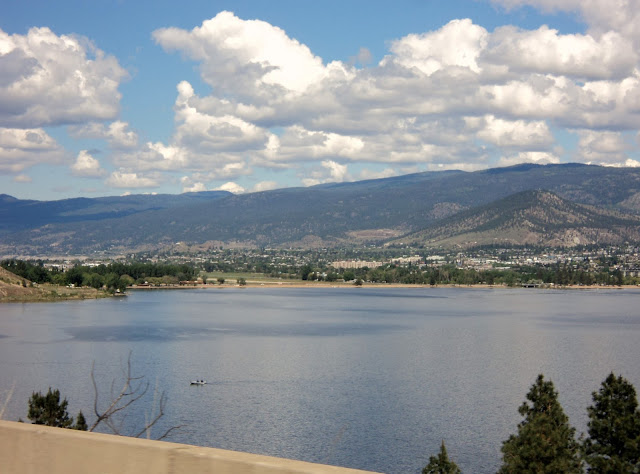 So, we made it to our destination by 3:00 which was good timing since we have committed to being off of the road by 4:00 every day that we travel.  I fell asleep after preparing a fantastic curry dinner and arose early ready for the next day's journey....:-)