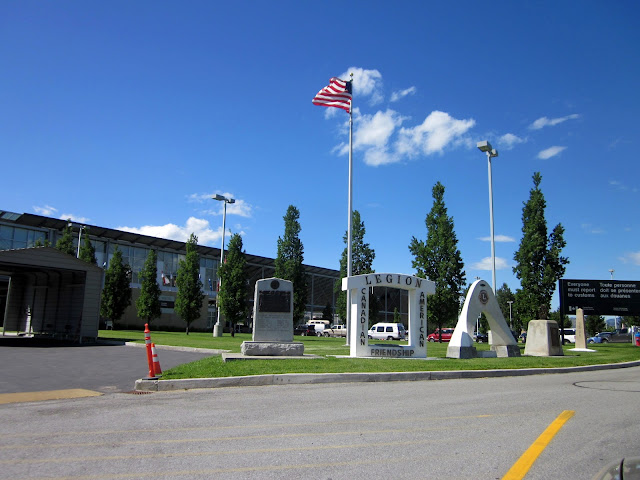 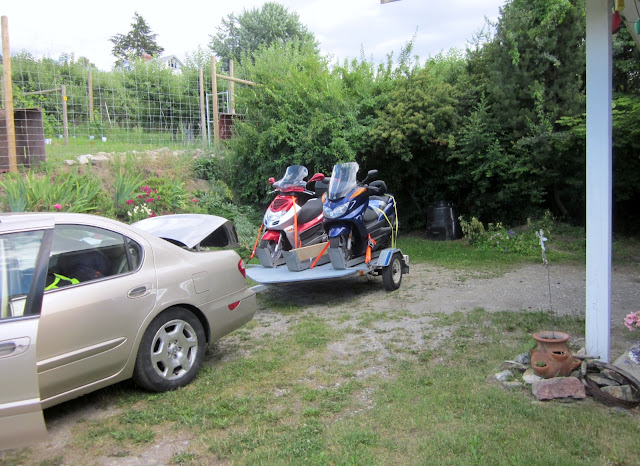 So, we made it to the Okanogan and have literally gone from cold in the Cascades to Very warm here.  We decided that since the tent was last put away damp, we had better get it up so that it could dry out completely before putting it away until ......who knows when!  Sorry, didn't take pics of us putting the tent up AGAIN....but you get the drift by now, I'm sure.

When it turned to about 8:00pm, I was starting to turn into a pumpkin!  Especially since I was on my second load of laundry and had taken a much needed shower.  We both left Mom quite content in her easy chair and said our goodnights with a kiss on the cheek before we both crawled into bed and slept like logs!

After getting much needed rest from our "vacation", we slept in until about 8:00am.  Had a good breakfast of scrambled eggs, sausage, toast and coffee made in our French Press....:-).  We spend the entire morning showing Scootard's Mom all of the pictures from our Portand adventure and bringing her up to date on this RR as well.  Then we decided to take her to the beach since she had not been in a while.  She gave us both hats to wear to proctect our "delicate heads" from the Okanogan sun. 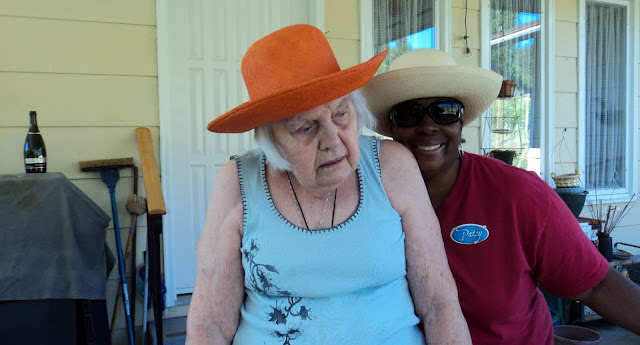 We found a nice place under a tree not far from the car and set up our chairs and our bags of snacks.  We ate TownHouse crackers, Brie cheese, roasted red pepper and garlic hummus and non-alchoholic beer and chocolate covered almonds 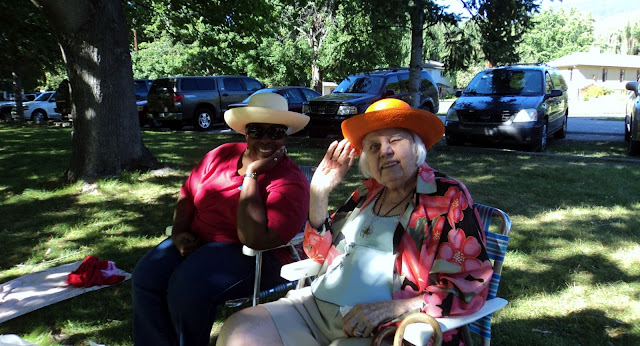 The lake was very pretty...the water was clear, but I didn't get in it.  We sat under the tree while Scootard took a swim for us....ha 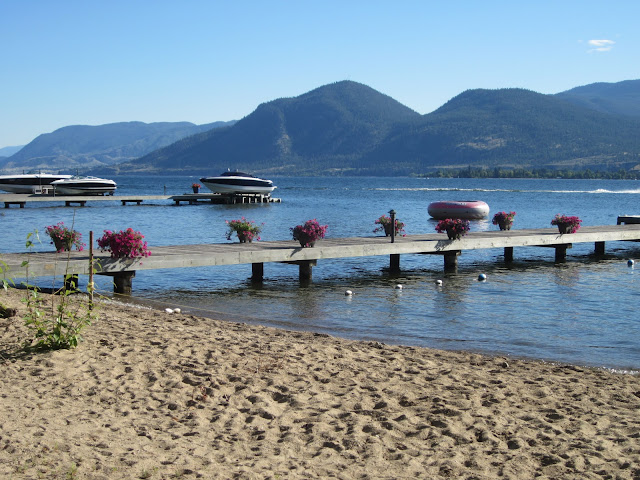 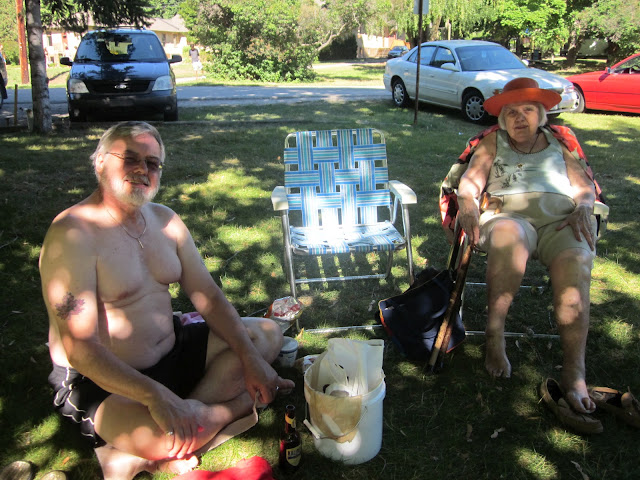 The water was very pretty and clear.  Scootard took a swim while we sat under a tree and had a jolly old chin wagg.....:-). 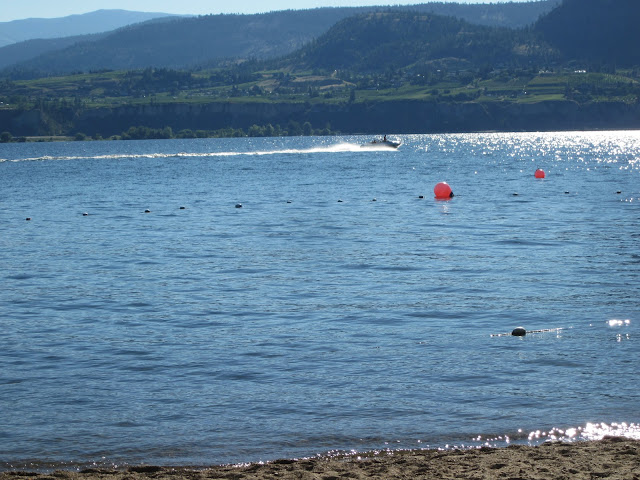 Then I decided I would take a walk and leave Scootard and Mom alone to visit for a while.....:-) 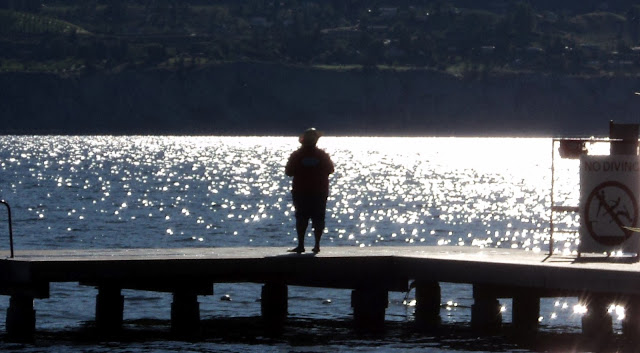 I didn't know that Scootard was stealing shots of me.....:-).  He likes to do that.  Then he came and got me as it was time to get back for dinner.  We had spent a couple of hours there. 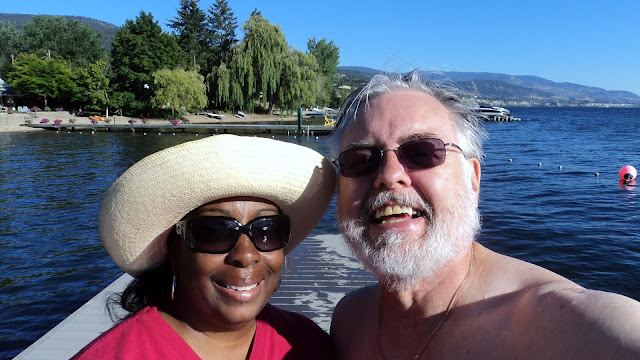 But of course we had to steal a kiss before leaving such a beautiful place.......well, I guess any reason is a good one to kiss the one you are in love with,  eh?...:-) 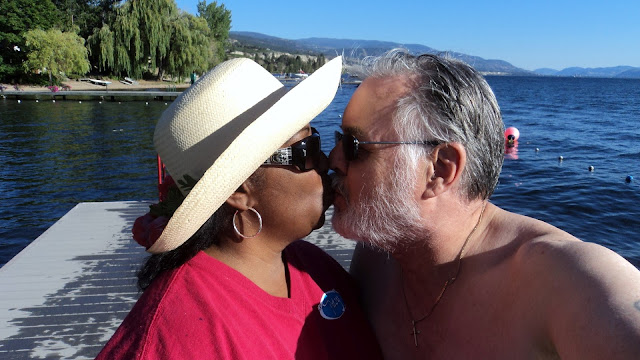 We went back to the house and enjoyed some left overs of Bar-b-Que chicken, cole slaw, potatoe salad and tomatoes and decided to watch some of the Olympics and relax for the rest of the evening.  We plan to ride tomorrow if the weather is not too scortching hot.  It may reach 100 degrees and without cooling vest, that could be a challenge!


We went back to the house and had some left overs, watched the olympics a bit and went to bed. I ate the chicken before I remembered to take a shot of it....sorry...ha 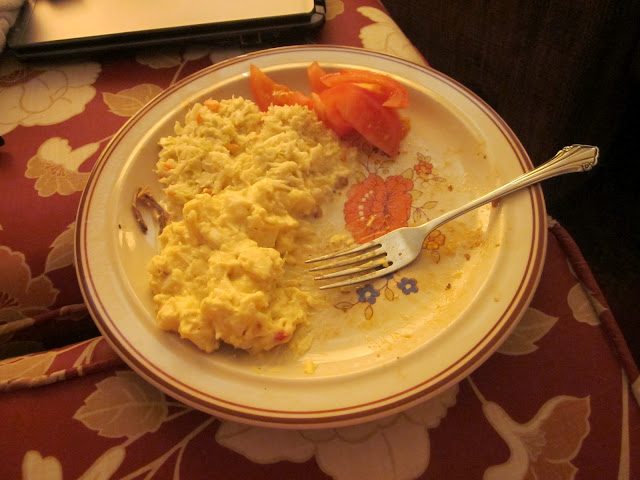 We got up early this morning (6:00am) and Scootard was rearing to go.  Me on the other hand could have slept in another hour or so.  I was very concerned about the large chunks of gravel on his Mom's drive way long before we arrived.  So, when I got to the end of the drive with a hugh divet in the road and then a 30% slant downward into a "blind spot" on a well and fast traveled road.......I decided to let him take the bike down the hill for me rather than roll into moving traffic that I couldn't see coming.

Maybe one day I'll be that courageous as to try that, but this ain't the day.  He'll be taking it back up the gravely hill too!

We got going and rode through the countryside....Penticton is known as "Wine Country" in BC.  I guess something like California.  We heard it was going to reach 100 degrees (37c) and decided to get an early start before it was to hot to ride for "pleasure".  The morning is cool  and quiet as we go. 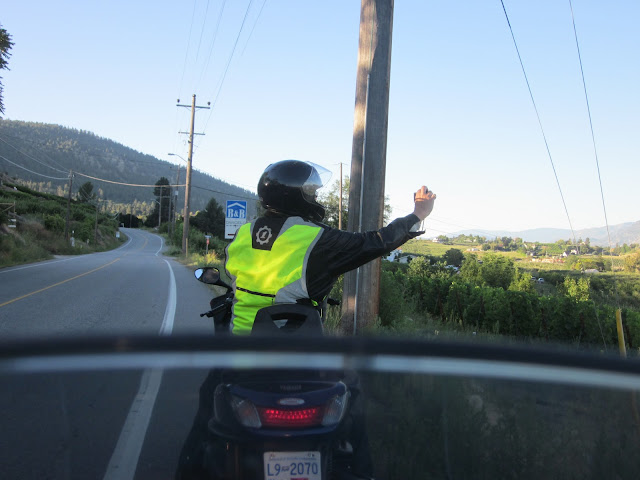 Sorry about the mirror in the shot.  I was trying to do this with one hand while sitting on a hill near a blind corner..... 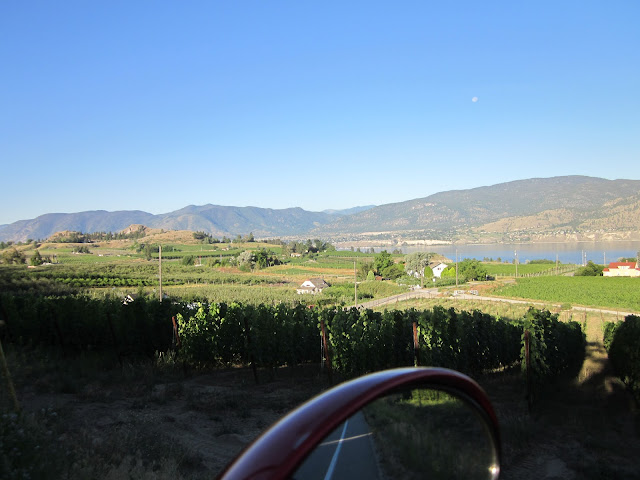 Scootard still has his gigantic mouse pad for comfort on his seat!  I guess it works for him....:-) 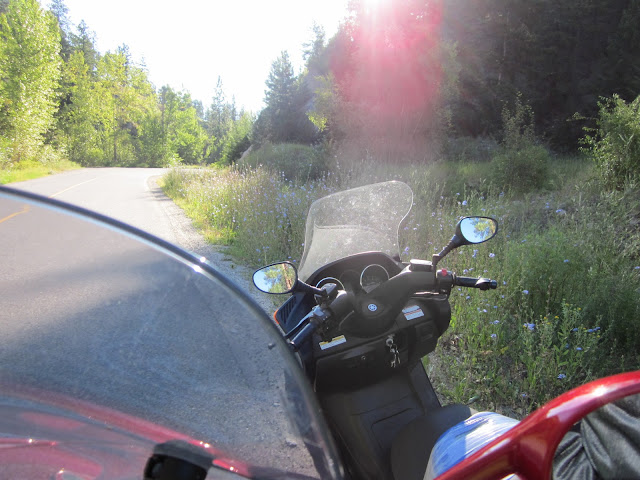 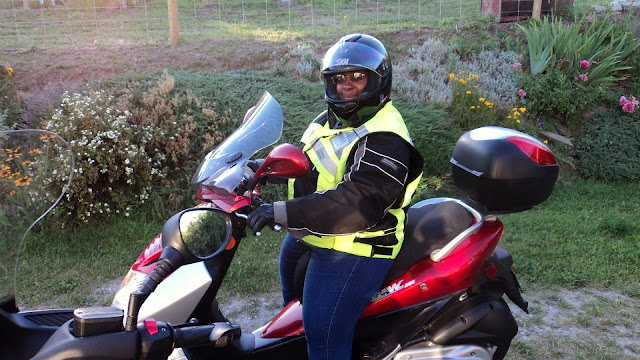 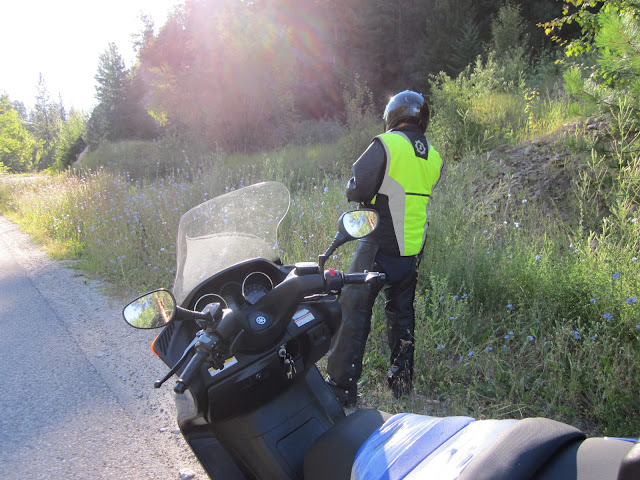 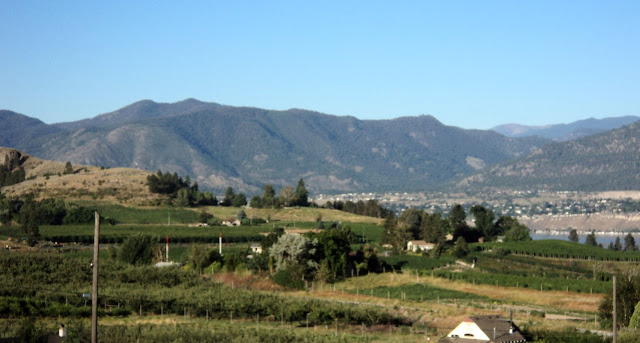 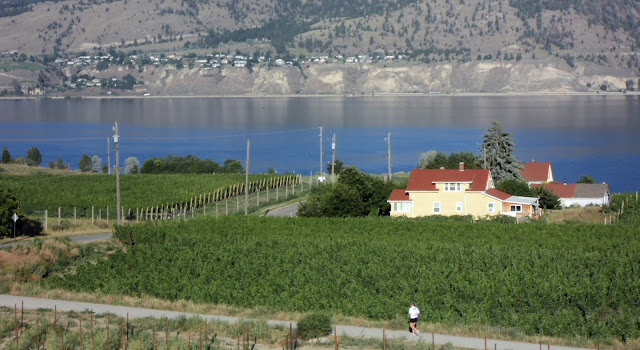 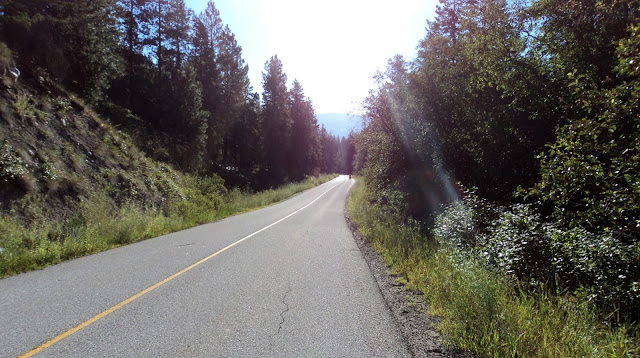 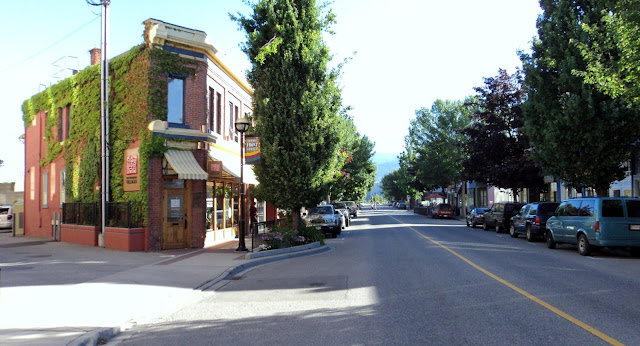 It was still pretty deserted out side. At least that's what it appeared to be until about 30 minutes later. 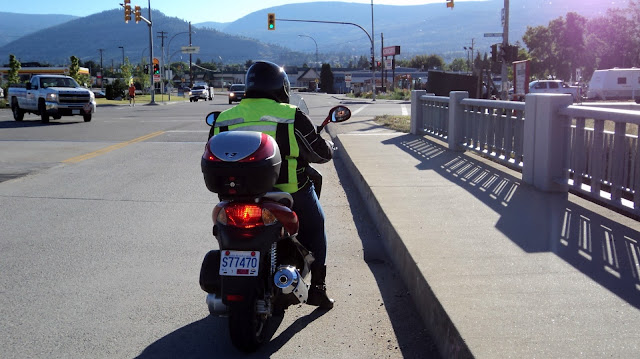 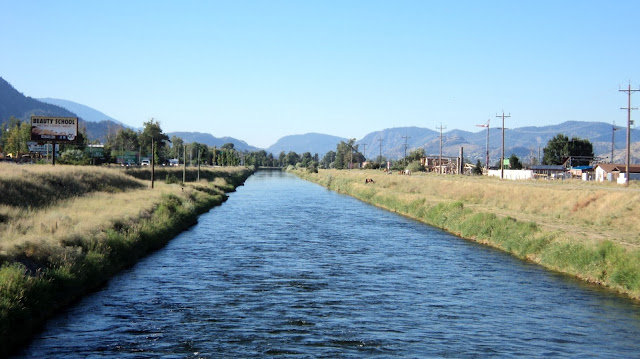 We rode a while and with my nerves still rattled, we decided to head toward town to get some breakfast and catch up on RR's and e-mail. We found a Starbucks right in the middle of a farmer's market that the town's people were setting up for.  It was about 8:00am. 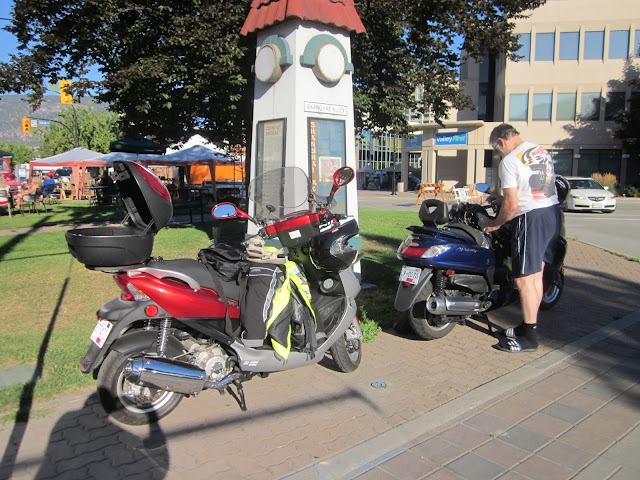 We got a table in the shade, ordered breakfast and coffee and got to work.....on this! ha 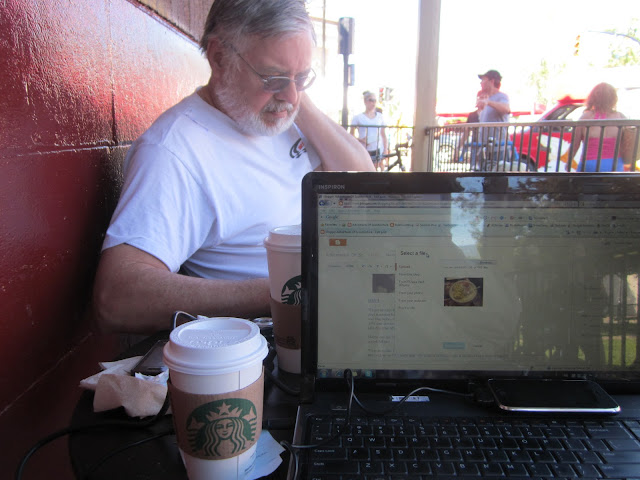 We had our Pacsafe thingee with us and was able to take all of our gear off and put on comfortable shoes for walking if we decided to see what the market had to offer. 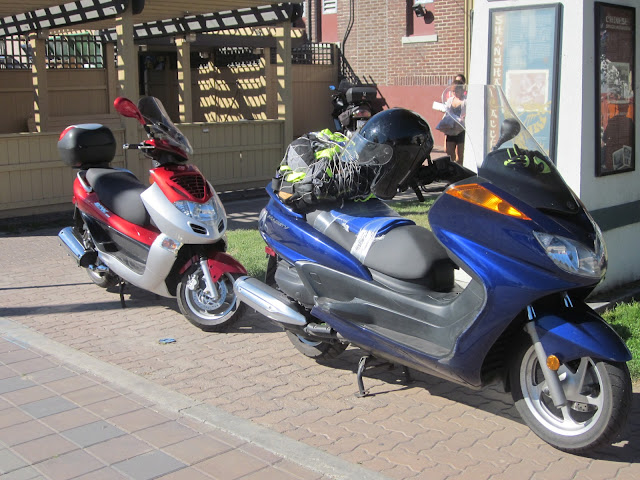